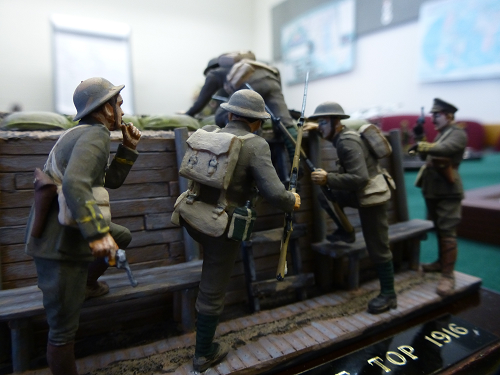 Every month, members of the National Capital Model Soldier Society, whose motto is “To Honor History Through Art,” meet to swap ideas and tips on creating model soldiers, and, of course, to show off their latest creations to their friends. Many of these models stand at less than 2¼ inches tall, and are painstakingly painted to appear as detailed as a full sized man standing only 15 feet from the observer. A scene (or vignette in modeling parlance) of several figures can take as many as 60 hours to complete.

“It’s very relaxing, I put on some classical music or a book on tape, and time just goes away,” says Joe Bles, the Vice President of NCMSS.

While NCMSS is open to models of all stripes, from Lord of the Rings to Lord Kitchener, the main focus is on historical modeling. “I just get fascinated by the history of it, which is not well known today,” says Mr. Bles, “modeling is a way to bring that history back alive; once the artifact is actually gone, the only thing left is the model.” To that end, the NCMSS has gone into schools around the capital area to display their work, and hope to ignite a passion for both history and modeling among younger generations.

At one school, Mr. Bles says, they received some pushback for the grim nature of their displays, but the aim was not to show the brutality, but rather “the humanity of it- these guys were living in the mud and the trenches, getting shot at and bombed everyday, but they kept their humanity. Kids need to know that.”

Bullets, bombs, and poison gas are not the only challenge facing the miniature soldiers of the American Expeditionary Force. Just like the Allies at the beginning of America’s involvement, there is currently a desperate lack of American WWI soldier models available relative to British and French miniatures. The cause of this is most likely because European countries have been observing the centennial of fighting for over a year now, while the USA still has 18 months to go before public interest piques. “Not too many American figures from World War One yet,” says Mr. Bles, “but 2017, 2018, it’s all going to open up.”

Additionally, the olive green uniform of the AEF, while effective on the battlefield, provides an additional problem for modelers trying to create engaging vignettes. “It’s a challenge because the uniforms and environments are really bland. But I appreciate the challenge” of trying to make them interesting to the eye.

What does the NCMSS think of the juxtaposition of the macro-commemoration of the future National World War One Memorial with the micro-commemoration found in these miniatures? “It’s great because it [the future memorial] is an attention-getter. People will see it and begin to ask about World War One, and they can learn about it... It changed the whole world. Countries that were in existence didn’t exist anymore, new leaders and ideas took over, and we [the US] became a major world power. It’s important to know why it happened and what the results of it were.”