Born exactly 138 years ago, on July 9th 1881, in Painesville, Ohio, Nellie M. Dingley was a friendly and kind-hearted woman. Shortly after graduating, she worked at the Carnegie Library in Kent, Ohio. She remained there about 7 years, and used to love spending time with children. She could spend hours reading stories to them. Convinced by a friend that she would be a perfect nurse, Nellie entered the Roosevelt Hospital in New York City and graduated with honours. 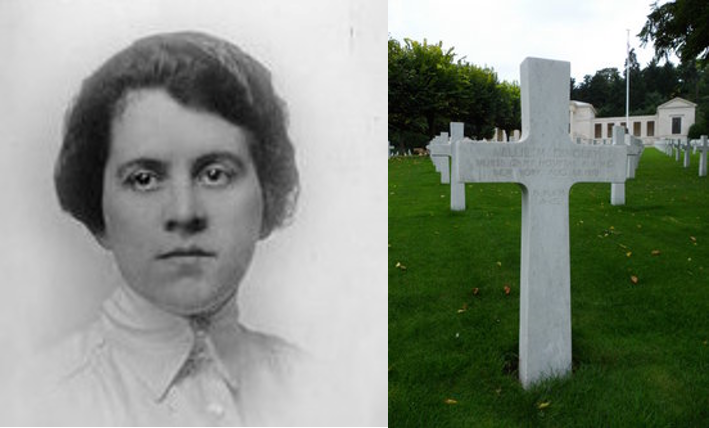 Nellie M. Dingley and her grave marker at the Suresnes American Cemetery in France.Then came the Great War. When America went in, so did Nellie. She joined the U.S. Army Nurse Corps and volunteered to serve in France with the New York Roosevelt Hospital's Mobile Operating Unit. Like all the courageous women who served in the Great War, Nellie knew she could die, but the love for her country was stronger than the fear of death.

Nellie arrived in Paris on July 4th 1918 and served at the 4th Camp Hospital where she cared restlessly for the soldiers stricken by the flu epidemic. By doing so, she contracted the virus herself. Sadly, on August 28th 1918, Nellie died of pneumonia. She was buried at the Suresnes American Cemetery in Paris, with full military honors.

To remember the courage and sacrifice of these exceptional women, the Michigan Military Heritage Museum, which has a unique collection of WWI Women artifacts, will be presenting a special WWI Women display at its "2019 World War One Day" event on August 10th 2019.

Information on the Michigan Military Heritage Museum in Grass Lake MI can be found here: https://www.facebook.com/mimilitaryheritagemuseum/