In July 29th's edition of the World War I Centennial News Podcast, Episode 133, host Theo Mayer spoke with Executive Director Dan Dayton about the progress of the national memorial, the newly renamed memorial fundraising arm, and how World War I continues to resonate in American society. The following is a transcript of the conversation, lightly edited for clarity: 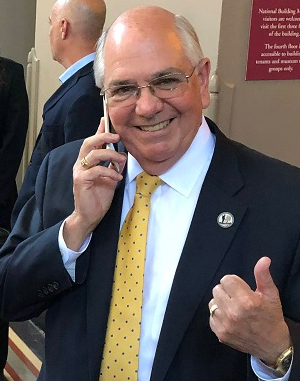 Executive Director Dan DaytonFor Commission News we have another guest with us today, who has been as deeply immersed in the centennial of World War I as Matt Naylor has. Dan Dayton also has dual roles. First of all, Dan is the executive director of the US World War I Centennial Commission, and Dan is also the president of a 501-C3 nonprofit organization newly renamed The Doughboy Foundation. That's been the fundraising arm for the National World War I Memorial in Washington DC. Dan is also an avid listener to the podcast, having been the guy who asked us to develop it. Dan, thank you for joining us.

Dan Dayton: Theo, great to be with you. I do enjoy this podcast, so it's a special honor for me to be on with you today.

Theo Mayer: My first question to you is, you've spent the last half a decade immersed in nurturing the commemoration of World War I. How did you wind up in that role?

Dan Dayton: A gentleman from North Carolina, Jerry Hester, has been interested in World War I for much of his life. He is now an octogenarian, and one of my favorite people. And Jerry asked me for my help as a volunteer. As he began to discuss the importance of the war, its impact on the United States, its impact on the world, the impact the United States had when it entered the war, I knew I had to help him. He helped me to understand that. And he helped me to understand how important it is to remember those who came before, as well as the lessons that were learned in the war, and how critical they are, even to where we are today, and the effect on events in the world today.

An interesting thing, we had the model of the memorial on display at the 9/11 museum in Lower Manhattan last fall for about six weeks. When we first approached their museum leadership, they understood immediately the direct line connection between the effects of World War I and the attacks on the United States and 9/11. We didn't have to explain that. We didn't have to sell it. They said, "We've got it. We understand it. We want to help." So Jerry was the guy who got me in.

Dan Dayton: I was the only one they could find that was old enough, who'd actually fought in a war. I spent many years of my life in the United States Navy, and helped with international naval reviews and fleet weeks in New York City for a number of years. And then I was asked by the Navy to help with the bicentennial of the War of 1812- keeping the sea free for more than 200 years was our mantra. And we wanted to tell the story about how the United States Navy really was critical to keeping sea lanes of commerce open around the world for all those years. So yeah, I've been involved for a while.

Theo Mayer: Dan, before we talk about the foundation, could you give us a quick update on the National World War I memorial in Washington DC? What's going on? Where are we now? How's the fundraising going? What does the schedule look like?

Dan Dayton: We are now in receipt of all of the construction documents from our design team. We recently got virtually all Commission of Fine Arts and other agency approvals. There are still a few things that we need to resolve. Just recently, we resolved some lighting design issues that were particularly important to the Commission. The relationship with the Commission of Fine Arts and the World War I Commission has been absolutely splendid. There's always tension in a group of people talking about different artistic impressions. And what is the best way to go forward with a particular storytelling program, the one we have here? So that collaborative program over the past several years has resulted in a better memorial, I think, for the long run, and for the ages. But lighting was really important. One of our advisors, who is former Secretary of State George Schultz, and he's one of our many distinguished advisors. Seriously, I was just finishing up my conversation with him the first time I met him. And I said, "Is there anything else that you'd like to give us?" He said, "Yes. Get the lighting right. It's really important. Your guys are just going to want to put lights on the ground and shine it up, and it's not going to work." So I'm going to see him again shortly, and I'm pleased to tell him that we engaged the services of the same lighting designer who lights sculptures for the Met in New York City. I saw a model of his work, and it's breathtaking. So we'll start preparing the site for memorial this October. That process will take one year. The rest of the sculpture is being developed. Sabin (Sabin Howard, head sculptor for the memorial) will start working on the full size sculptures, sculpting them in mid-August in a brand new studio in Englewood Cliffs, New Jersey. So we're looking forward to seeing that. 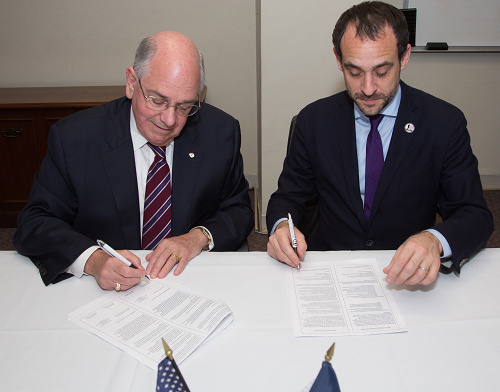 Director Dayton has been deeply involved with the Commission at every step of the way. He is pictured here signing a collaboration agreement with France's Mission du CentenaireTheo Mayer: Dan, what's The Doughboy Foundation? And what role is it playing currently in building the memorial? And what's its role going to be after the memorial is completed?

Dan Dayton: The Doughboy Foundation has a unique relationship with the World War I Centennial Commission as its primary fundraising organization, and that's what it's been doing over the past several years. Now as we look at what happens the day after the memorial is dedicated, everything is in place, construction is all done. What does it look like, and how does that work? So that foundation is working now to develop augmented reality, virtual reality tools, which will help Americans better understand the story of World War I from the standpoint of a soldier's journey, from the standpoint of the journey of the United States as a nation. Our educational focus is on the American Doughboy. It's the story of a soldier and a story of a nation. And The Doughboy Foundation wants to make sure it does everything it can to assist in telling that story.

Theo Mayer: Is it going to act like a "friends of," which some of the other memorials have? Is that kind of the idea?

Dan Dayton: Yeah. I think it will be probably a little more robust than that because those organizations do a great job of telling the story and remembering and honoring those who served. They do a superb job. The Doughboy Foundation hopes to be able to do as good a job as they are now, and also the help work to be able to tell the story of World War I, which I think you coined the phrase, has sort of fallen into the mists of obscurity. And we want to make sure it doesn't happen again.

Theo Mayer: Okay. Now a question that's an easy one to answer, but I think is confusing to some people. What is the difference between the Doughboy Foundation and the US Foundation for the Commemoration of the World Wars? That's what shows up when I've been giving donations.

Theo Mayer: And it's a good thing because US Foundation for the Commemoration of the World Wars doesn't fit on the "to who" line on a check.

Dan Dayton: I learned that early. It certainly doesn't. And it doesn't exactly come tripping-ly off the tongue, so Doughboy Foundation it is.

Theo Mayer: Very recently, there was a press announcement about something called the AEF Memorial Corps. In fact, we spoke about it on the show last week. Can you review that? What is it? And what's it intended to do?

Dan Dayton: When I first got involved in this project, we were in the presence of the family of a young man who had been killed in battle. And one of the principals, at the end of the ceremony said, "Is there anything I can do to help you?" Offering his personal help and condolences to the family. And the mother said, "Yes. Don't forget him," so that's what we need to be doing. The veterans service organizations, the major ones, both the American Legion and the VFW, they feel the same way. They want to make sure we don't forget. So the AEF Memorial Corps is simply a mechanism to help them organize to ensure that we don't forget, in a very tangible way of building the national memorial in the national capital. 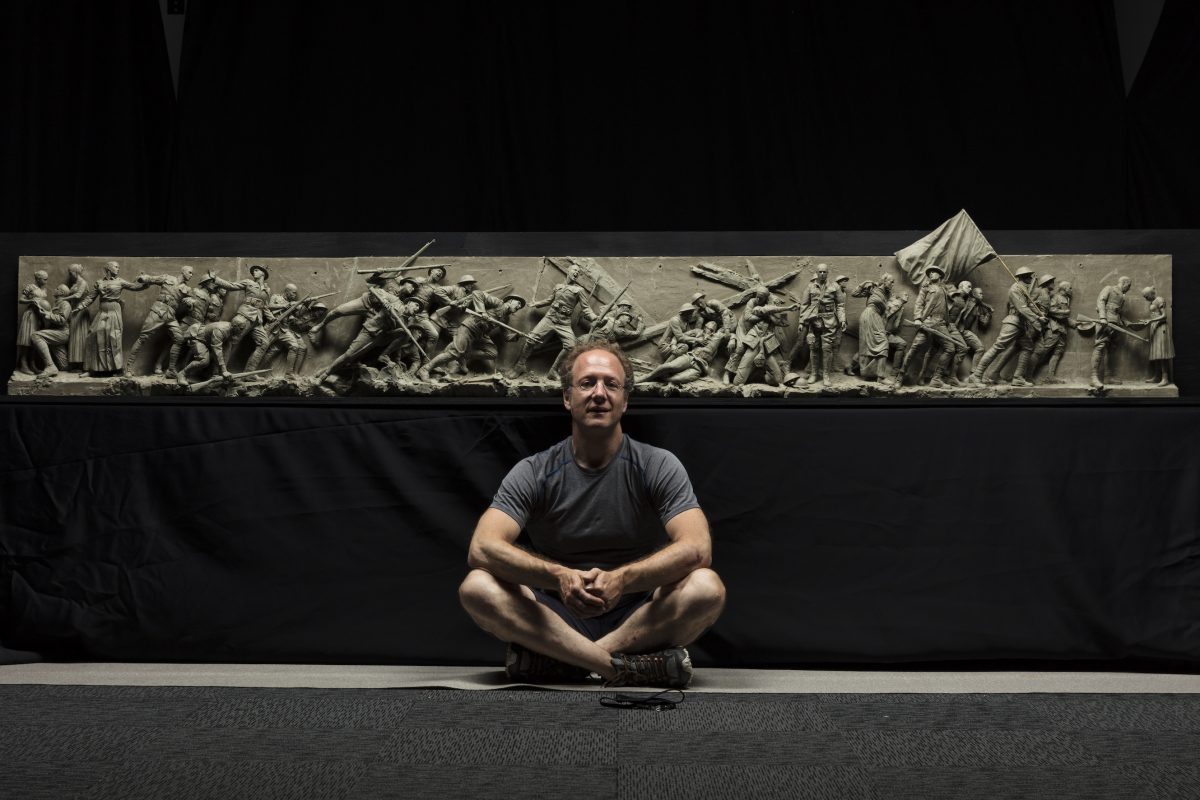 Sculptor Sabin Howard with a scale model of the memorial sculptureTheo Mayer: Dan, in your own reflection on this US World War I commemoration, is there anything that particularly stands out for you?

Theo Mayer: For a closing thought, what do you think the listeners should remember about why we must not let our national memory of World War I fall back into the mists of obscurity, as we like to say? Which is where we found it before the Centennial.

Dan Dayton: This war is simply too important. I learn something every day. This is a bold plug for one of our potential sponsors: I found this out as we prepared to take a meeting with American Express. At the beginning of the war in 1914 there were 150,000 Americans in Europe. No banks in Europe would accept their checks or any form of payment for them to be able to leave Europe and return to the United States, except American Express. So when I had that meeting, I was pleased to go in and say, "By the way, thanks for returning 150,000 of our fellow citizens to the United States at the beginning of the war, and getting them out of the war zone." And they did that. Yeah. It is just so important to the fabric of our nation. And we forget our warriors at our own peril. We must remember those warriors who came before us and give them thanks for their service.

Theo Mayer: Dan Dayton is the executive director of the US World War I Centennial Commission, as well as the president of The Doughboy Foundation. We have links for you in the podcast notes.