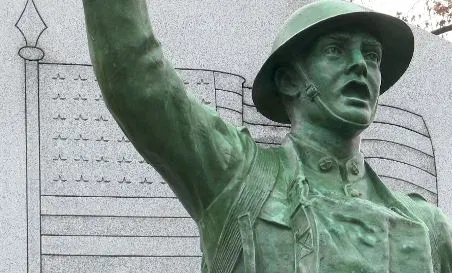 Close-up of the recently-restored Doughboy statue in Wheeling Park, Wheeling, WV. The return of the statue after restoration was delayed by the effects of the COVID-19 pandemic.

Wheeling Park Doughboy has his rifle back after year of restorations

WHEELING, W.Va. (WTRF) — Over one year later, the Doughboy statue in Wheeling Park is back, and near a century old, is looking better than ever!

Lester was taken to Detroit last November where ‘Venus Bronze Works’ set out to restore him.

Covered in dents, bird droppings, rust head to toe, a missing rifle and a hand poorly reattached… The elements were not kind to this 88-year-old figure, but Wheeling was.

Individuals and local foundations raised a whopping $21,000 to fix him up… A cost the friendly city deemed deserving as he stands to remind the Ohio Valley of all who fought for our freedom.

"This guy, to me, represents the common soldier. He’s not an officer. He’s an infantry man; a Doughboy. These are the guys who died in large numbers in all of the wars really. And so, I think it’s important to remember that. And it’s our legacy. So, I’d like to see him stay here for an indefinite future."
--Sean Duffy, Chairman of the Wheeling Doughboy Restoration Committee

This WWI statue was supposed to be back in May but the pandemic even affected his arrival… Which the history buff says was ironic since Lester represents the soldiers during 1918, who were impacted by a pandemic…but one by a different name; the H1N1.