[Return to the North Dakota in World War I home page] 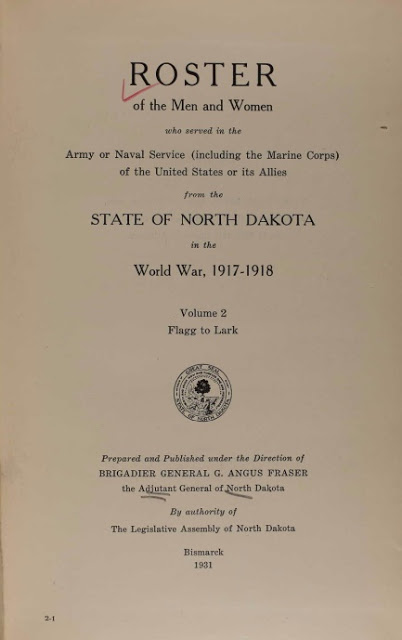 The original 4 volume Roster of the Men and Women who served in the Army or Naval Service (including the Marine Corps) of the United States or its Allies from the State of North Dakota in the World War, 1917-1918 was Prepared and Published under the Direction of Brigadier General G. Angus Fraser, the Adjutant General of North Dakota, by authority of The Legislative Assembly of North Dakota in 1931.

The Roster is dedicated to the North Dakota Men and Women, who as Soldiers, Sailors or Marines, served in the World War. It contains the names and information for nearly 30,000 North Dakota military personnel who served their country during World War I. The contents of this book are being systematically digitized and added to the database for you to search.

Regrettably, this original roster does not include all names and the current project is working on rectifying this by adding names to the below list as they are found in other sources.

Appreciation goes to the HATHI TRUST Digital Library for the use of their PDF of the Roster of the Men and Women who served in the Army or Naval Service (including the Marine Corps) of the United States or it's Allies from the State of North Dakota in the World War, 1917-1918, from which this information was taken.  To view the full PDF version of these books please visit https://catalog.hathitrust.org/Record/008230948.

We're not able to host the files on this site, due to their size and complexity. Click on the links below to view each file.

You can also download the files for later viewing by clicking on the downward-facing arrow at the top-right section of the screen.

Click here for the full Microsoft Excel file of North Dakotans who served in World War I.

Click here for a PDF document of North Dakotans killed in World War I. The names are listed by county.

If you would like the files sent directly to you, or to suggest database updates, please contact Shirley at [email protected].