Ephraim Rose, Story of a World War I Soldier from Ohio

In late 1916 the Ohio National Guard was mobilized to send troops to the Mexican border to guard it from incursions by Mexican Revolutionary Pancho Villa, and possibly other Mexican Revolution soldiers.  According to the sources here at the Ohio History Connection the 9th Battalion of the Ohio National Guard stayed in Ohio.  However a newspaper article about the Rose family and their World War I service, states that Ephriam Rose served on the Mexican Border.  I believe that to be a mistake since it appears the 9th Battalion stayed in Ohio.  They helped construct the Ohio National Guard training base and mobilization center at Camp Willis in Upper Arlington Ohio.

Our soldier, Ephriam Rose, was listed as a Bugler with Company G, 2nd Battalion, 372nd Infantry regiment.  As you can see by the picture enclosed the Ohio History Connection has his dog tag, a photo, his Official Roster entry and a newspaper article about his service.  His unit left Newport News Virginia on March 30, 1918 aboard the Susquehanna and arrived at St.-Nazaire France.  He is listed as a member of the AEF, American Expeditionary Forces, from that date till he arrived back in Hoboken New Jersey on February 11, 1919, aboard the U.S.S. Leviathan.  The Leviathan sailed from Brest France on February 3, 1919. 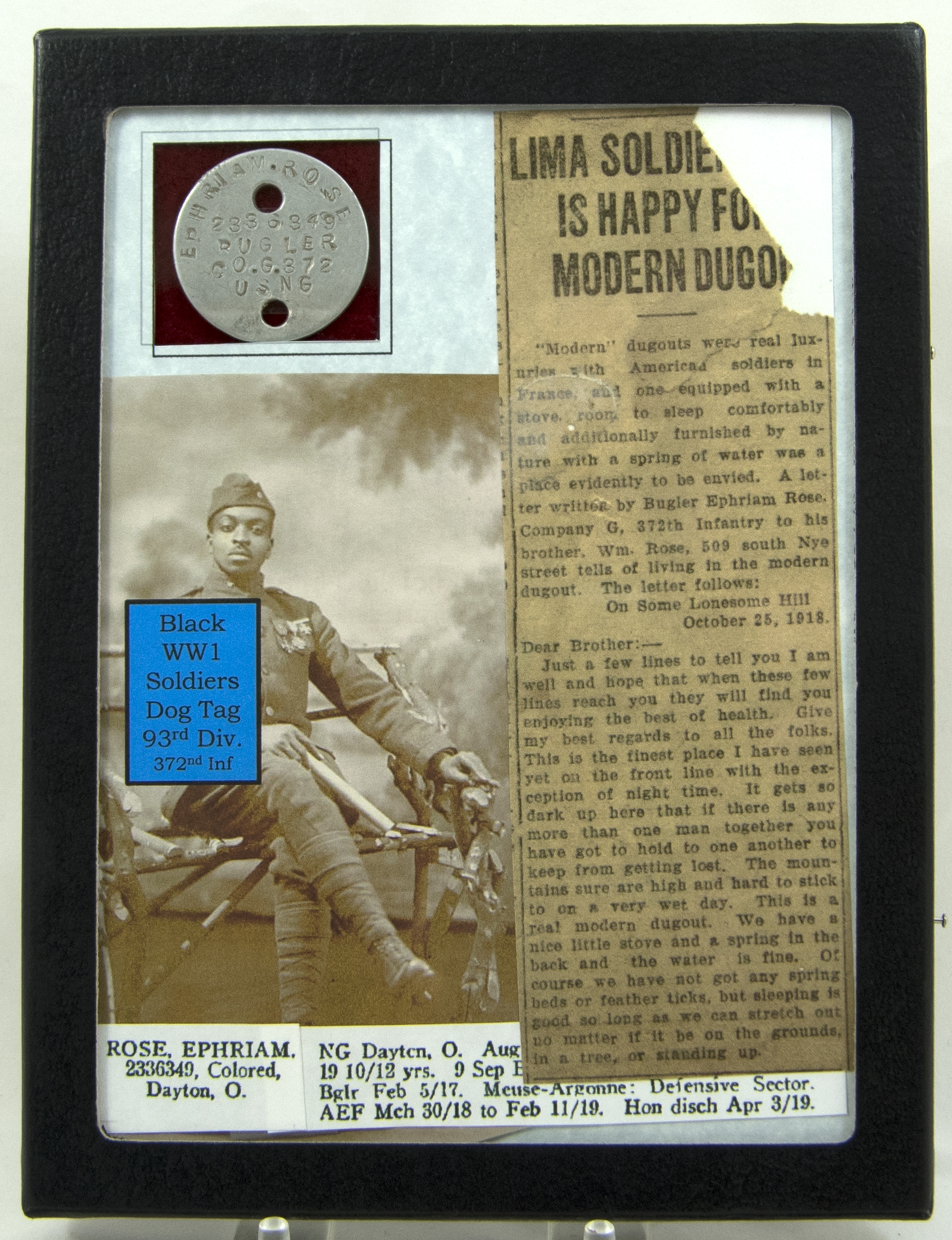 While in France the 2nd Battalion, and our Ephriam Rose, of the 372nd Infantry Regiment served with the French Army 157th Infantry Division, the Red Hand Division, commanded by General Mariano F. J. Goybet.  You might ask: why did the 372nd (and the 371st as well) serve with a French Division?  Well the American general officers did not want to command black troops and did not want Black troops serving with their White troops.  So both the 93rd Infantry Division (Provisional) and the 92nd Infantry Division, also an African American unit, were given to the French Army and served with them till the war ended.

Ephriam Rose and the 372nd entered the front line trenches for the first time on May 31, 1918 and launched their first major offensive action on September 21st, 1918.  Between June and September most of the original African American officers had been removed and replaced by white officers.  Boards of Examination had been set up to evaluate officers and that was the result.  Despite the loss of their long service and familiar officers the troops of the African American regiments performed remarkably well.  Ephriam Rose and the 2nd Battalion of the 372nd were in the front lines near Verdun and Hill 304, a place made famous and infamous during the 1916 Battle for Verdun.  Later they moved through many French towns including Bois de Brocourt, Juvigny, Brienne-le-Chateau, Vitry-le-Francois, Jessecourt, Hans and Ripont.  From September 26th through October 8th they participated in the great Meuse-Argonne Offensive with the 371st Infantry and both were attached to the 157th French Red Hand Infantry Division.  Ephriam Rose and the 2nd Battalion of the 372nd captured part of Bellevue Signal Ridge and Bussy Farm. They attacked and eventually captured Sechault and later the town of Monthois.  The American units and the 157th French Division were taken out of the line on October 8th.  In the last month of the war they were in the Alsace and Lorraine defensive sectors but did participate in combat operations.

The 372nd Infantry Regiment suffered casualties consisting of 91 men killed in action and between 600 and 700 wounded or gassed.  The full strength of the regiment would have been about 3000 men.  The afore mentioned newspaper article says our Ephriam Rose was wounded in battle, but his roster entry does not mention that.  Most of the roster entries do mention if that soldier was wounded, but no 23 volume roster can be completely accurate and so he may have been wounded and it may have not been recorded properly.  The 372nd and the 371st U.S. Infantry Regiments were awarded numerous medals and awards for their service in France.  Each unit was given a regimental Croix de Guerre, 168 individual Croix de Guerre, 38 Distinguished Service Crosses, four Medal Militaire and two crosses of the Legion of Honor.  The unit Croix de Guerre was presented to the 372nd at the Port of Brest France by Vice Admiral Moreau, the Maritime Prefect of Brest, before a large audience of French and American officers and soldiers.

The 372nd Infantry Regiment raised over 10,000 French Francs for a monument to be established near Monthois, the scene of their one of their major battles.  They deputized General Goybet and Colonel Quillet to act as trustees to get the monument erected.   From the unit history of the 2nd Battalion, 372nd Infantry is the following quote:  “ On September 30, 1929 a commission consisting of members of the Ohio State Senate and Legislature visited the battlefields of France and formally received and dedicated this outstanding monument and achievement for the great State of Ohio.”

Ephraim Rose and his brothers all show up in the 1920 census living in the same home and address as shown in the 1910 census.  However Ephraim Rose died on November 8, 1922, age 26.  Cause of death was listed as Chronic Parenchymatous Nephritis (Nephrosis) with pulmonary complications.  In laymen’s terms is was a disease of the kidneys producing kidney failure.  The death certificate notes the disease was contracted while in the US Army.  This lends credence to the mention of his being wounded while in France, despite the fact it is not noted in his official roster entry.    He is buried in Woodlawn Cemetery in Lima Ohio.

The American Negro in the World War.  Emmett J. Scott, Chicago, Homewood Press, 1919. (this book is has been scanned and can be viewed on line.)

Ohio Memory has several pictures of the 372nd Infantry Regiment, marching in downtown Columbus and their flags:

Numerous web sites have material and images for the 372nd Infantry Regiment on line: