Faces in the Book: A Bridge between the U.S. and Italy

This panoramic photograph shows Company E at Camp Sherman near Chillicothe, Ohio. By the end of World War I, more than 120,000 soldiers trained at Camp Sherman. More photographs of the 332nd Infantry Regiment are available on Ohio Memory here. Via Ohio Memory.

Assembled and trained at Camp Sherman near Chillicothe, Ohio, one of sixteen army training camps across the nation, the 332nd Infantry was part of the 83rd Division, also known as the “Ohio Division,” as the most of its men were from Ohio. The 332nd was training in France in May 1918, when General Pershing selected the unit to be sent to the Italian Front at the request of the Italian government. In late July 1918, a total of 4,000 soldiers and 125 officers, including the 331st Infantry Regiment medical unit, arrived in Villafrance di Verona, Italy, under the command of Colonel William Wallace. The 332nd was called to Italy for propaganda purposes with two responsibilities—to bolster the morale of the Italian people, and to trick Austrian forces into thinking there was a large American presence in Italy. The men regularly organized staged marches on the Italian lines along the Piave River, without engaging in combat, changing their location and uniforms daily to convince Austrian aero-observers that large numbers of American units were deployed there. Italian government officials even requested that the American unit selected have as few Italian-Americans as possible, so that Austria would not entertain the possibility that these were Italian troops disguised as Americans. The 332nd also participated in public events like military medal decoration ceremonies, enabling them to interact with Italian civilians in cities and towns along the front.

Finally in October 1918, the 332nd Infantry was summoned to advance to the front lines and cross the Piave. The 332nd was assigned to the Italian 31st Division, and marched as part of the British XIV Corps across the Italian line in pursuit of fleeing Austrian troops crossing the Tagliamento River. Allied troops continued to push forward and seized the Austrian position on November 4th. Later that day, Italian and Austro-Hungarian officials signed an armistice agreement, ending conflict on the Italian Front, and bringing an end to the Austro-Hungarian Empire. 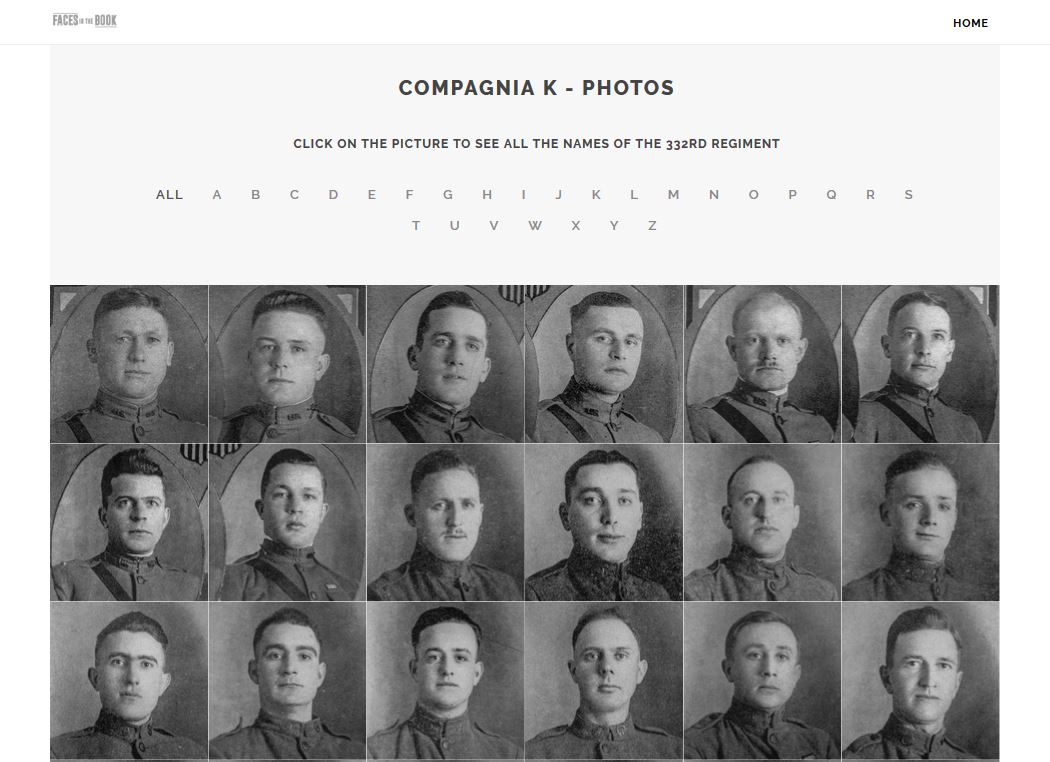 View the portraits of the men who served in Company K of the 332nd Infantry Regiment here. Via Faces in the Book.

Creators Gobbato and Giorgio hope for Faces in the Book to “[establish] a bond between Vittorio Veneto and all those living in the USA, who will now have an additional tool to keep alive the memory of their ancestors, with the awareness that, after more than a century, their contribution in the Great War is still very much alive in the historical memory of our country and is continuously reflected in the relations between our two nations, based on peace and solidarity.” Faces in the Book highlights one of the many ways Ohioans contributed to World War I, and celebrates the memories of loved ones from across our state and nation.

The Museo della Battaglia Vittorio Veneto has an open call for documents or photographs relating to the 332nd Infantry. For more information about Faces in the Book, or to speak to project staff about sharing your private collections, please send inquiries to info@facesinthebook.it.