Immortal. Hot-headed. Business savvy. Ace of Aces. Eddie Rickenbacker accumulated many adjectives on his way to becoming a larger-than-life legend, but he began with humble beginnings.

Born in Columbus, Ohio, in 1890 to Swiss immigrants, Rickenbacker lived most of his childhood in a home his parents built on the east side of the city.  The Rickenbacker family lived a simple life, and seven siblings crowded into the tiny home raising much of their own food on the surrounding land.  There was no lack of excitement in young Eddie’s life however, as he quickly became known as a rowdy daredevil child who led a local gang of fellow rebels. Rickenbacker racked up near misses with death and the law despite his father and mother’s strict discipline.

That would all change, however, when Rickenbacker’s father died in 1904. After promising his mother to change his behavior, he quit school to work odd jobs and earn income for his struggling family. Eventually, Rickenbacker would find his way into a local car shop where he would begin by sweeping floors and work his way up to driver. He would go on to race cars for manufacturers and ultimately make a career of it. By the time the United States entered World War I, Rickenbacker was already wealthy and famous as a race car driver.

He had bigger dreams, however, and enlisted in the American Expeditionary Service hoping to serve as a pilot. Unfortunately, due to pilot requirements regarding age and college education, Rickenbacker was not qualified to fly. Instead, he served as a driver for various officers in France. A combination of luck and skill would lead to him driving Billy Mitchell, the commander of the Air Service, and the man who would help him skirt the regulations to become a pilot.

In his autobiography, Rickenbacker reflects on his training for flying – noting that he had an immense fear of heights and a tendency for motion sickness, both elements that made his work training as a pilot more difficult. Nevertheless, Rickenbacker quickly learned the ropes and was commissioned as a lieutenant. Rickenbacker joined the 94th Aero Squadron, better known as the “Hat in the Ring Squadron” as they were the first American unit to fly in combat. His first experiences in aerial combat were harrowing, and Rickenbacker quickly recognized that success in aerial combat would require shrewd intellect and careful calculation. After first flying with hand-me-down French Nieuport 28s that struggled to keep up with German planes, the A.E.F. would upgrade to the more advanced French Spad XIII. Rickenbacker, like other pilots, worked with his mechanics to give his plane distinctive style and modify his plane and guns to better serve his style of combat. 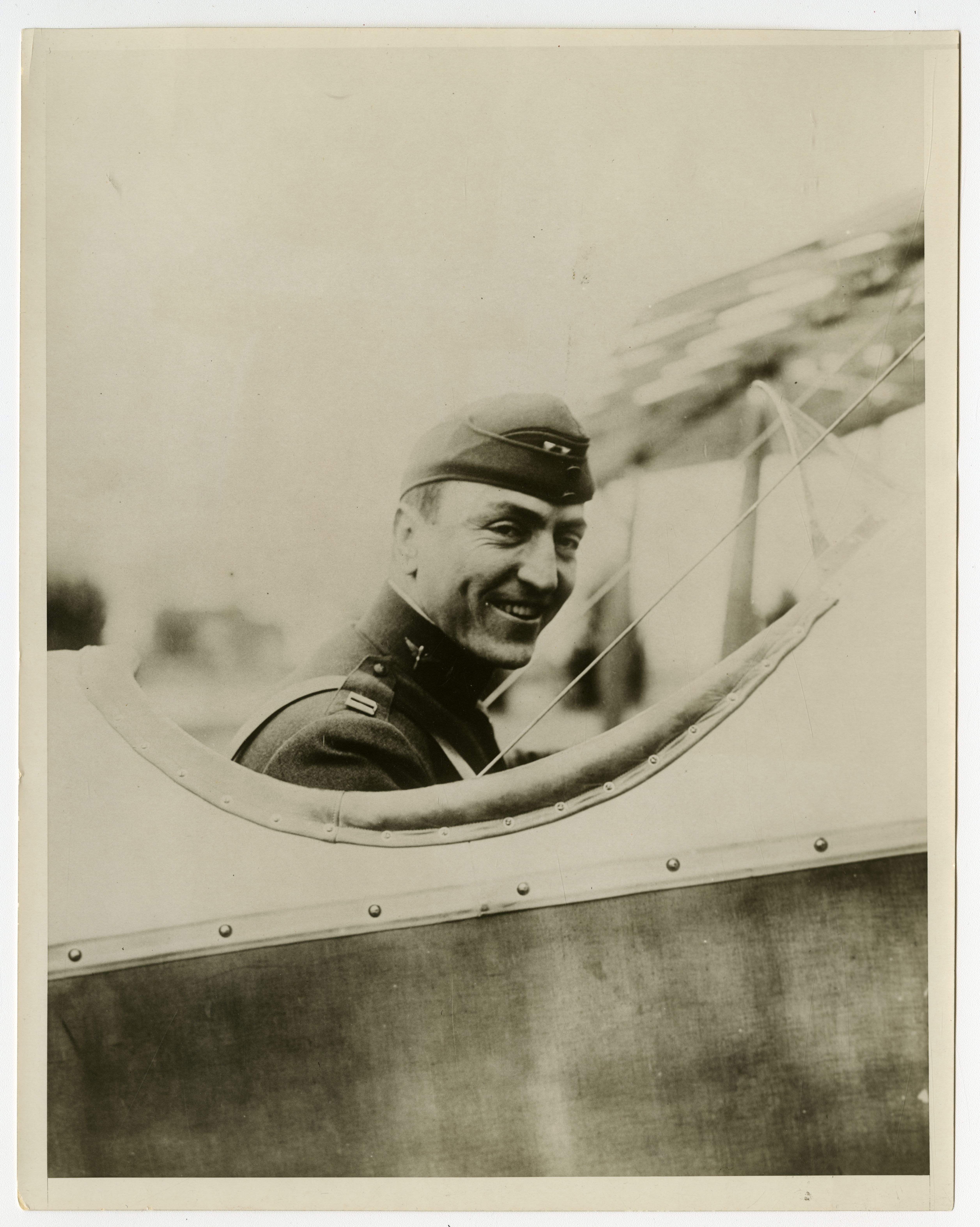 Dated 1917-1918, this photograph shows Eddie Rickenbacker, a fighting ace in the 94th Aero Squadron, sitting in a plane cockpit while stationed in France during World War I

American pilots quickly became locked in a race to the top of the score charts, each one vying for the coveted title of “Ace of Aces”. Rickenbacker received his first confirmed aerial victory in April of 1918. By May of 1918, Rickenbacker had been awarded the Croix de Guerre and achieved “ace” status after getting his 5th confirmed aerial victory.

Though older and with less formal education than many of the other pilots, Rickenbacker made friends with other famous aces like Quentin Roosevelt and Frank Luke. Rickenbacker noted in his autobiography that their deaths, as well as others like Raoul Lufbery, would change his approach to combat making him more circumspect about how he ran future missions to the front, a quality he adamantly tried to instill other pilots who were new to the front.

As American forces pushed north toward Sedan during the Meuse-Argonne offensive, Rickenbacker and his fellow pilots began accumulating aerial victories at a faster rate than ever before. In the fall of 1918, Rickenbacker ascended to command the 94th Aero Squadron and achieved the rank of Captain.  Rickenbacker would also be assigned the title “Ace of Aces”, and by the end of the war, he had accumulated more than 24 aerial victories.

The Ohio History Connection preserves a piece of his famous Spad XIII in its collection, stripped from the fuselage by Rickenbacker before leaving France and donated to the museum shortly after the war. The other half was proudly displayed in Rickenbacker’s Eastern Airlines office. 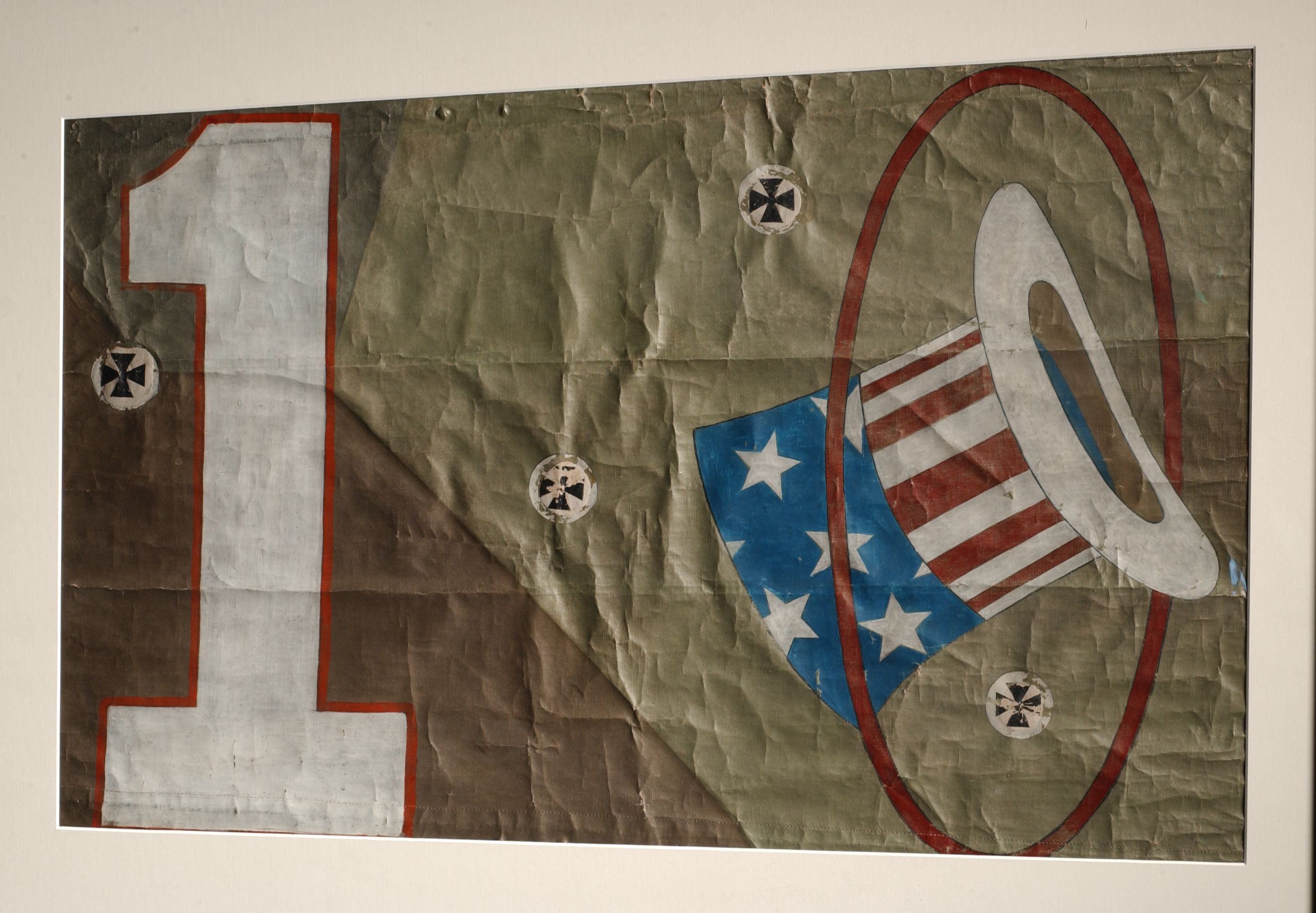 This section of fabric came from the French-made Spad XIII fighter plane that was flown by Captain Edward "Eddie" Rickenbacker. On the right is the Hat in the Ring insignia of the 94th Aero Squadron, one of the first American air squadrons to fight in German territory during World War I.

In the 1930s, Rickenbacker received the U.S. Congressional Medal of Honor for his service in World War I. Rickenbacker would go on to run Eastern Airlines and survive several more brushes with death, including more than 21 days at sea after a plane crash into the Pacific Ocean during a top-secret mission in World War II.  Rickenbacker’s business acumen and seeming immortality, alongside his status as the American “Ace of Aces” in World War I, would make Rickenbacker a legend of Ohio history.