Colonel Charles Young was not Alone 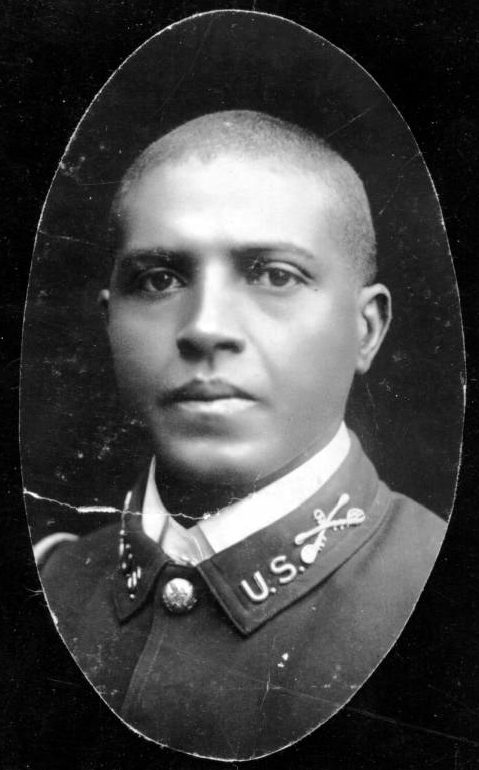 Charles Young wearing the uniform of the 9th US Cavalry. In 1917, the War Department forcibly retired then-Colonel Charles Young rather than risk having white soldiers serve under his command in France.

It is hard to imagine the impact the destruction of the African American Officer Corps had on African American World War I soldiers and their service. One of the best descriptions of service by an African American World War I officer was written by Charles H. Houston for the Pittsburgh Courier in 1940. Houston, a prominent attorney and lead counsel for the NAACP, had served as a First Lieutenant in 368th Infantry, 92nd Division. He wrote a thirteen-installment series on being an African American officer in World War I. Houston masterfully chronicles the racism and bias faced by himself and his fellow officers. The insidious nature of racism is reflected in things both small and large. Lt. Houston reflected on the disparity Black Officers faced in camp "...The Negro Troops were not as well supplied with Coal as the White Troops..." Worse still was the attitude reflected by the senior command.

At Fort Des Moines, 1200 African American officer candidates went to train for service in World War I. Lt. Colonel Charles Ballou was the commander at Fort Des Moines, and later would serve as commander of the 92nd Division. Houston wrote: "... Colonel Ballou told the regiment that the camp was an experiment and the future of Negro Officers in the American Army depended on the record we made at Fort Des Moines; that he expected us to vindicate our friends and justify the decision to make the experiment of training Negroes as Officers by staying out of anyplace where our presence right or wrong might cause friction..." Apparently Colonel Ballou was not aware Colonel Charles Young, the third African American to graduate from West Point, had led the men of the 9th and 10th Cavalry in combat for decades, and was a far more logical choice to command both Fort Des Moines and the 92nd Division!

Many of the same attitudes toward African American Officers was found at the regimental level. Historian and author W.E.B. DuBois wrote of the 317 Engineers, a regiment organized at Camp Sherman, Ohio. "... There were two battalions and all the officers were colored, except four field officers. The Commanding Officers, however, were from the first determined to get rid of the Negroes. On May 10 the colored captains were relieved ... On July 22 all the remaining colored officers, except two Lieutenants, the chaplain and the medical officers, were relieved at the repeated requests of Colonel Brown of Georgia..." There seemed to a belief (at least by some) that white southerners were better suited to command African American troops.

This belief and practice continued into World War II. Robert Renshaw, an African American World War II Veteran from Dayton, Ohio, reflected on his experience in the Army: "... If you want the truth, now I'm going to give you the truth. We had four white, non-educated officers from Texas - very prejudiced, couldn't read and write. Our outfit was made of boys from Ohio, Detroit and Chicago ... We had education, they didn't ..."

The impact of institutional racism on the African American World War I Officer Corps is hard to measure. We can evaluate the impact by examining the exceedingly small number of honors and medals received by African American World War I soldiers. Putting aside the generous recognition by the French government, a disproportionately small number of African American soldiers received medals or commendations for their wartime service. Fortunately, the U.S. World War I Centennial Commission, along with the Congressional Black Caucus, are looking into this long overdue aspect of the story of the 380,000 African Americans that served our nation honorably in World War I. It is critical that their voices and stories are heard, including in our nation’s classrooms. Resources for teachers are available, such as the National Park Service's Teaching with Historic Places series that features a lesson plan focusing on the World War I service of Colonel Charles Young. Also The Black History Bulletin, Volume 80, Number 2: Titled: African Americans in Times of War. This issue provides educators resources and lesson plans that include content on: Colonel Charles Young, and Lieutenants Charles Houston and Charles Jackson.

Saving the World for Democracy, by Charles H. Houston for the Pittsburgh Courier in (13) installments 1940: August 10th, 4th installment

Same as above; July 27, 2nd installment

An essay toward a history of the Black Man in the Great War by W.E.B. DuBois, The Crisis, June 1919