Although songs from Tin Pan Alley may have been consistent with the CPI’s objectives, self-published, vanity press, and manuscript songs offered different perspectives on the war effort. Without the pressure from mainstream commercial publishers, composers had leeway to conform to the norms outlined by Wilson’s CPI. An insight gained into examining these less popular songs may help in forming a better understanding of American society at a time when a diverse community was called in to unify and fight for a cause. Contrary to commercialized songs from Tin Pan Alley, these non-agenda-driven self-published songs offered a perspective from the private citizen. Most of these manuscripts were not published or mass-produced and the distribution of vanity press songs for public mass use was significantly less than Tin Pan Alley published songs. Surviving copies are held in the manuscript collection of the Library of Congress.

In 2013, the music division of the Library of Congress (LOC) cataloged and scanned about 14,000 pieces of World War I sheet music. At the time, 80% of the collection was printed while the remaining 20% in manuscript form. Among the printed collection, 60% was commercial such as those discussed in the prior sections while 40% was the self-published, amateur vanity press that is often overlooked. As of December 2018, 5,808 vanity press sheet music are digitally scanned and available in the Library of Congress' online catalog. Listed below is the breakdown. Vanity Press publishers included: 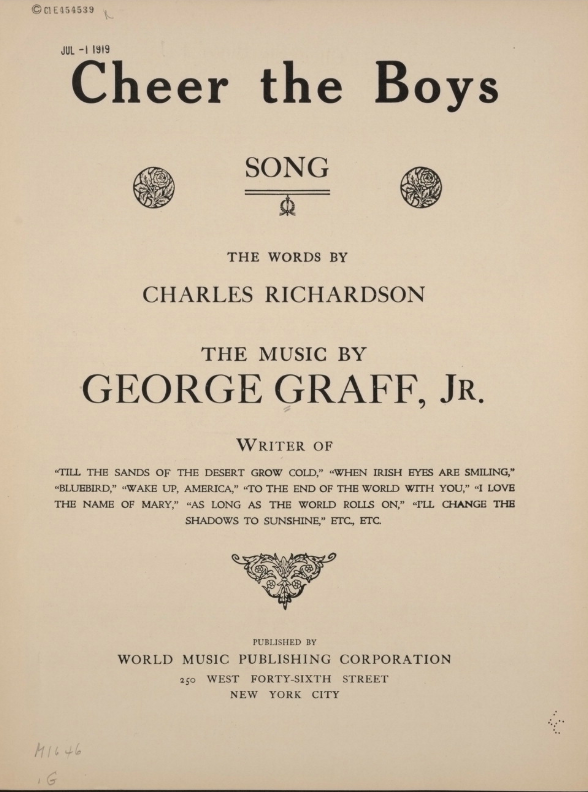 2. A soldier stands behind a woman with his hand on her shoulder as she reads a letter and holds a handkerchief. 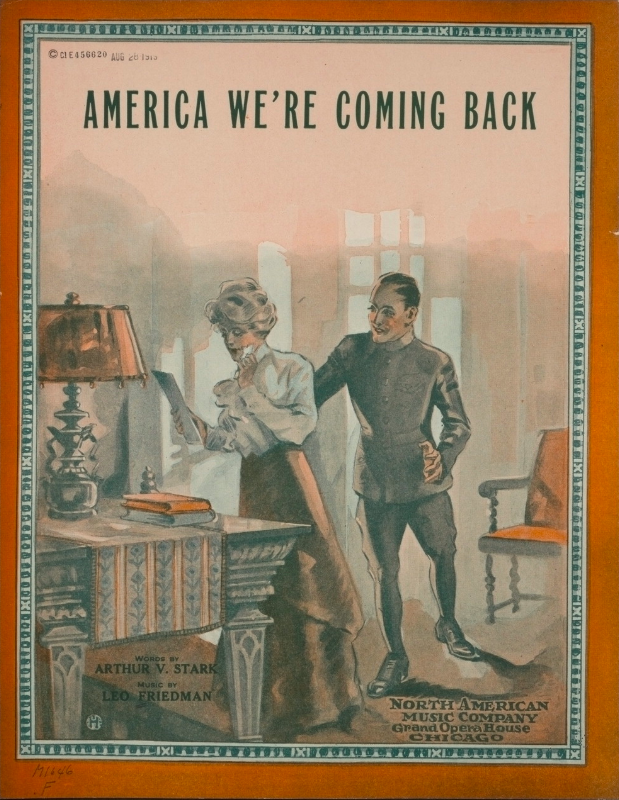 3. A soldier stands at attention with his rifle on his shoulder gazing at a cottage with a woman on the front steps waving. 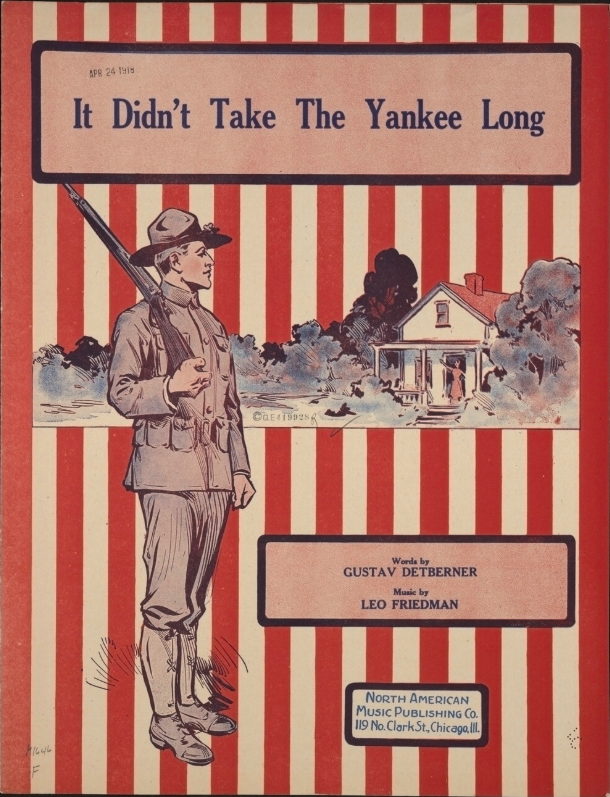 4. Lady Liberty with bared breast and a scowl on her face holds a sword up high in one hand and a banner in the other. 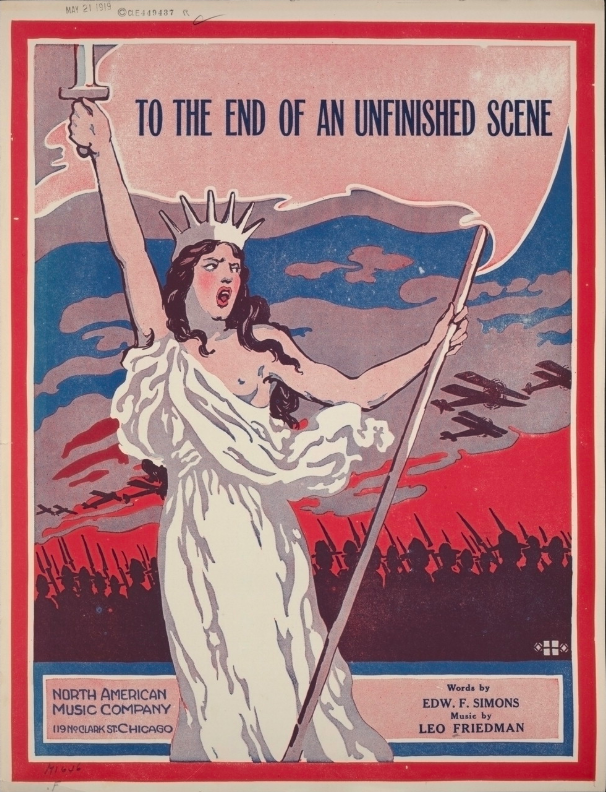 5. The torso of a soldier with a fixed bayonet charges out of the cover with a circle of blue stars in the background. 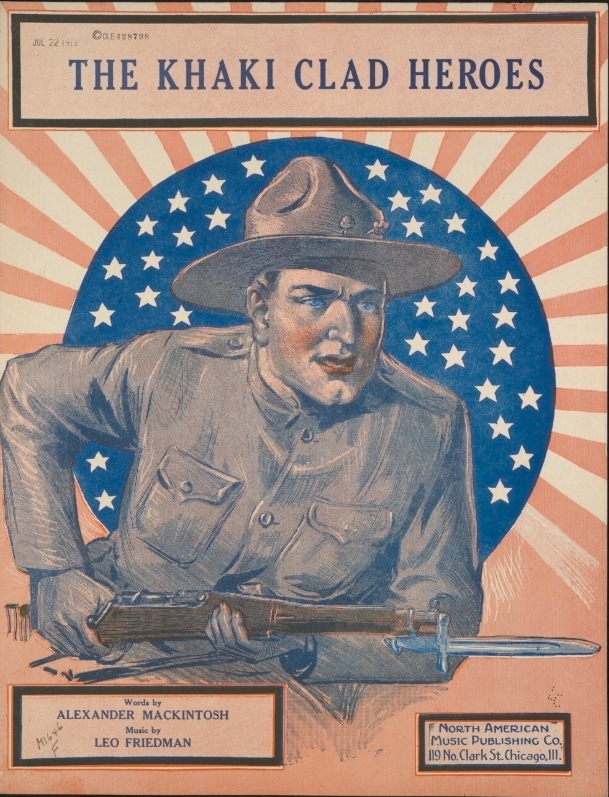 6. A woman holds a bunch of roses. 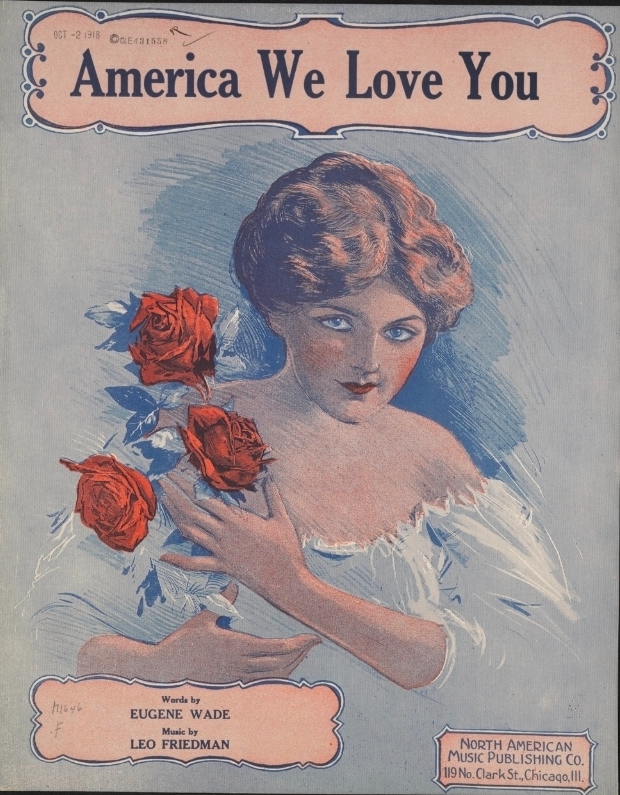 7. Soldiers on board a ship wave hats as they pass the Statue of Liberty with three other ships in the background. 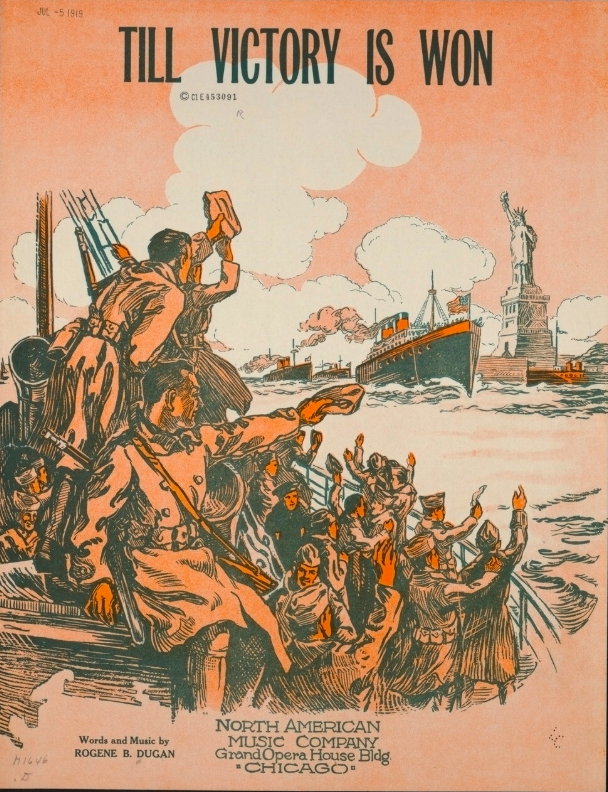 8. An artistic words only with stylized flowers in a vase. 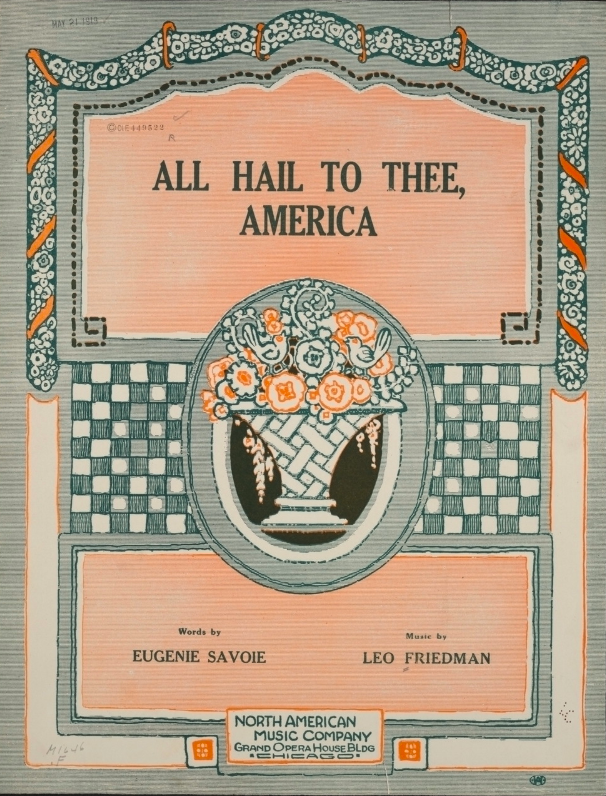 9. A group of soldiers hold their hats and cheer. 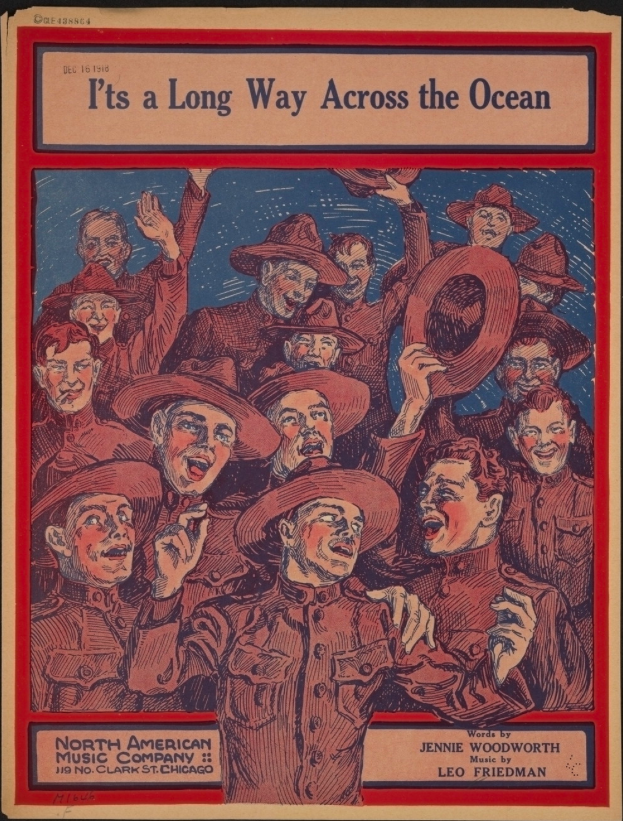 10. A man kneels with his hat in his hand before a woman seated under a tree next to a moonlit lake. 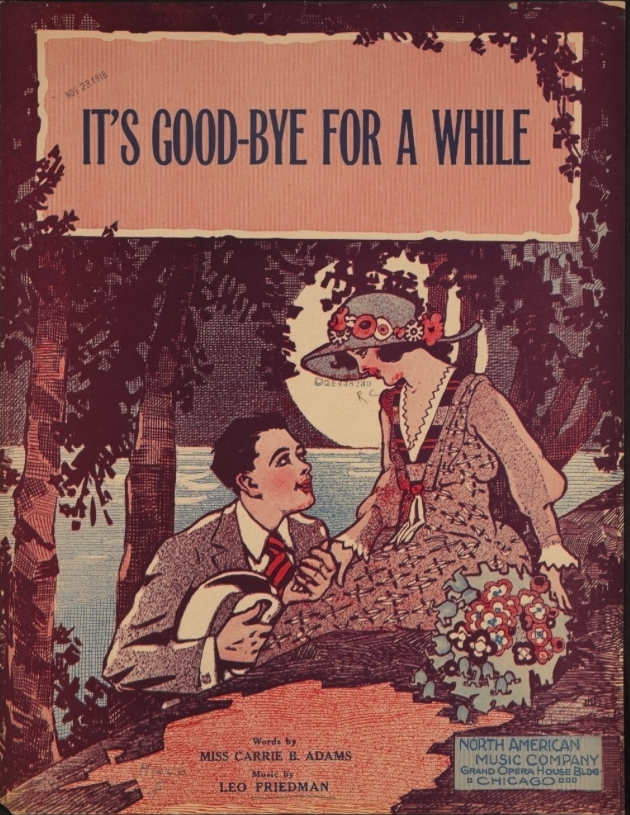 11. An artistic words only cover. 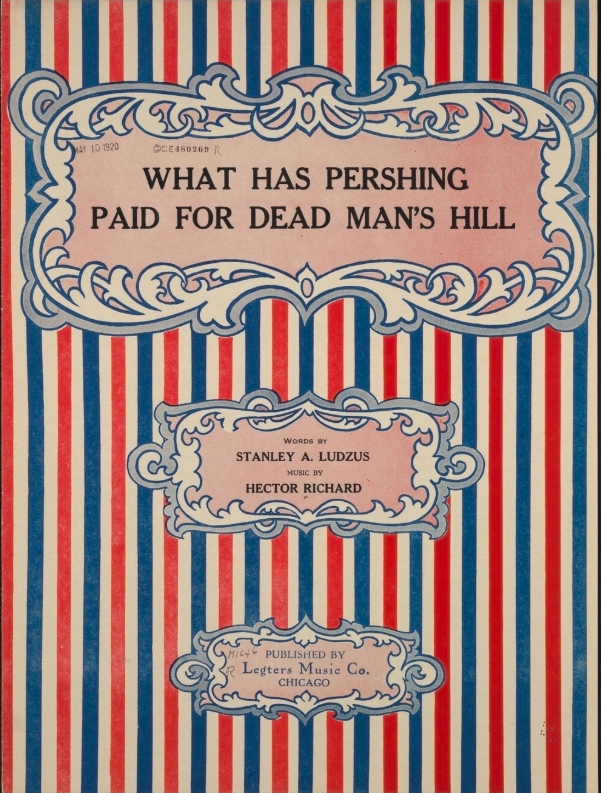 12. A soldier waves his hat and a woman by a cottage returns the wave. 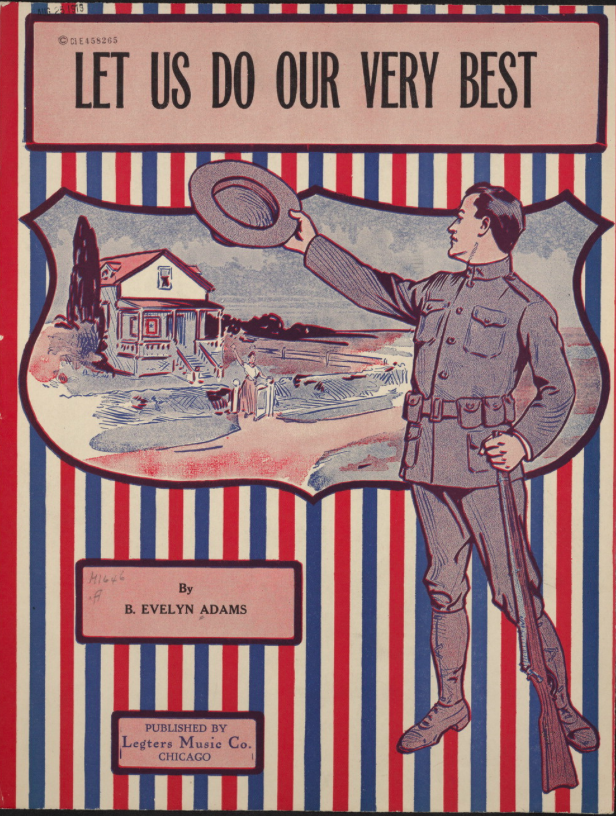 13. A soldier and a sailor with rifles face each other on a beach with ships, planes, and a dirigible in the background. 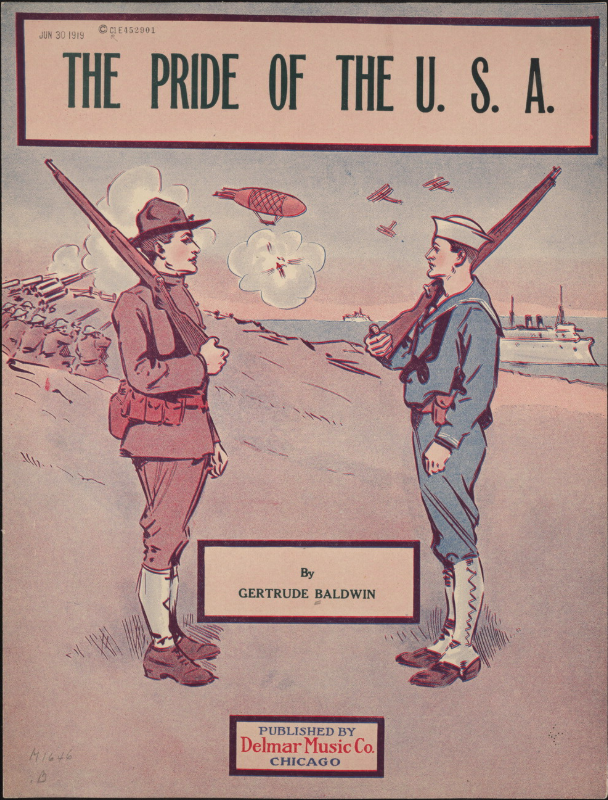 14. A sailor with a flag held high signals a plane that is diving. This cover is associated with the artist F. Bryant. 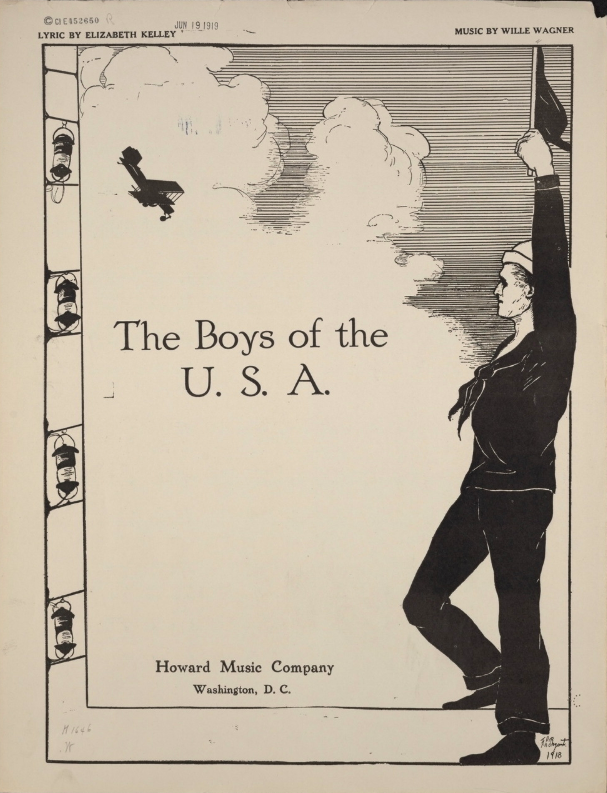 15. A woman sits in a rocking chair while a man and a woman canoe in a stream nearby. 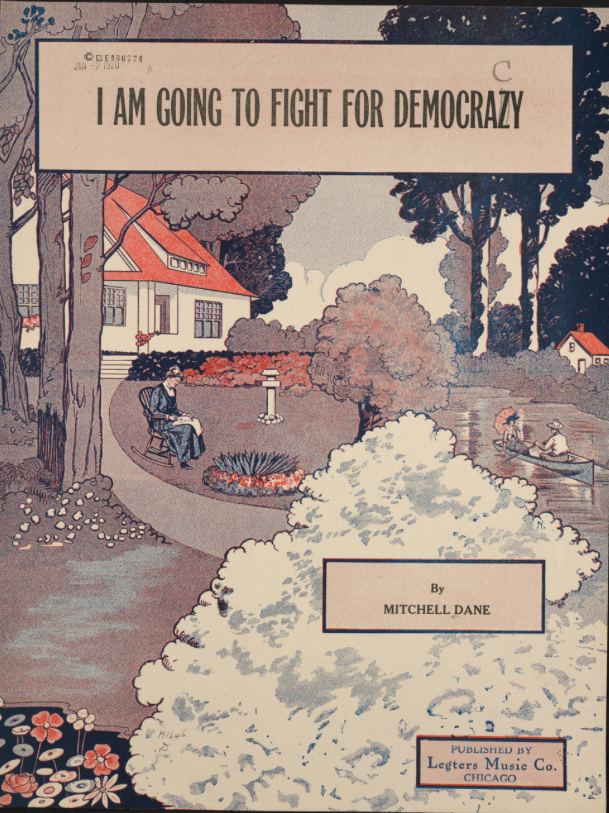 16. This cover features two women, one playing the lyre and the other reading a book. A country scene within a circle is in the center. 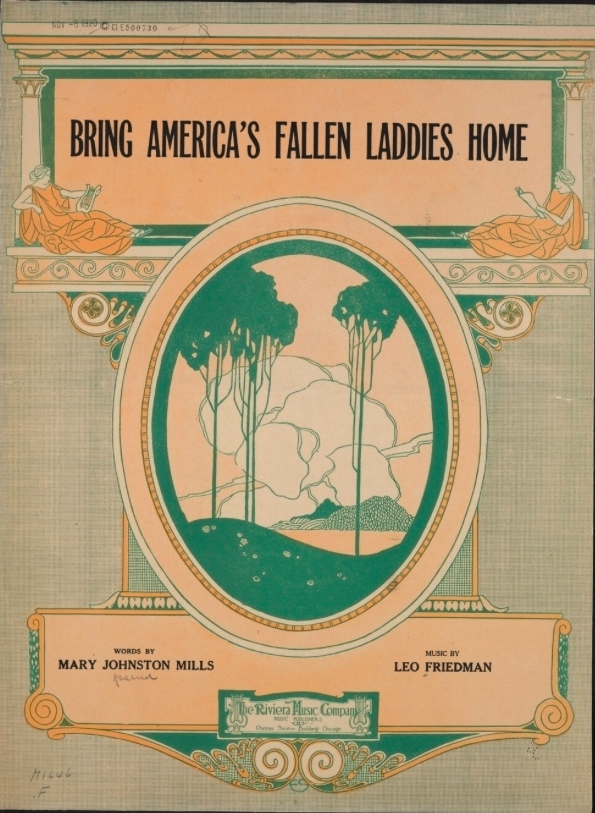 Check out the Library of Congress' collection of World War I sheet music and type in a vanity press publisher in the search box. Notice how these publishers used sheet music cover illustration as a one-size fits all solution to all of their customers. https://www.loc.gov/collections/world-war-i-sheet-music/

The first step to publish a song through the vanity press was to have an original poem and have the publishing house’s songwriter or “pulper” as they were known set the poem to music for a price. The publisher would then make three copies and take responsibility of having it copyrighted. These copies were distributed to the client, the publisher, and the Library of Congress. There were two options on how to market the piece. The first option was to have the client choose from a selection of standard cover illustrations, the publisher adds a title and names, and have it printed out on cheap stock paper in a standard piano and voice arrangement such as two verses and a chorus. The finished product was given to the client and it was up to the client on how to market and distribute it. The second option was for the publisher to charge the client extra with the promise that they (the publisher) would promote the song to a large commercial publishing house and circulate the song on the Vaudeville circuit. This was an apparent promise to rapid fame and glory. 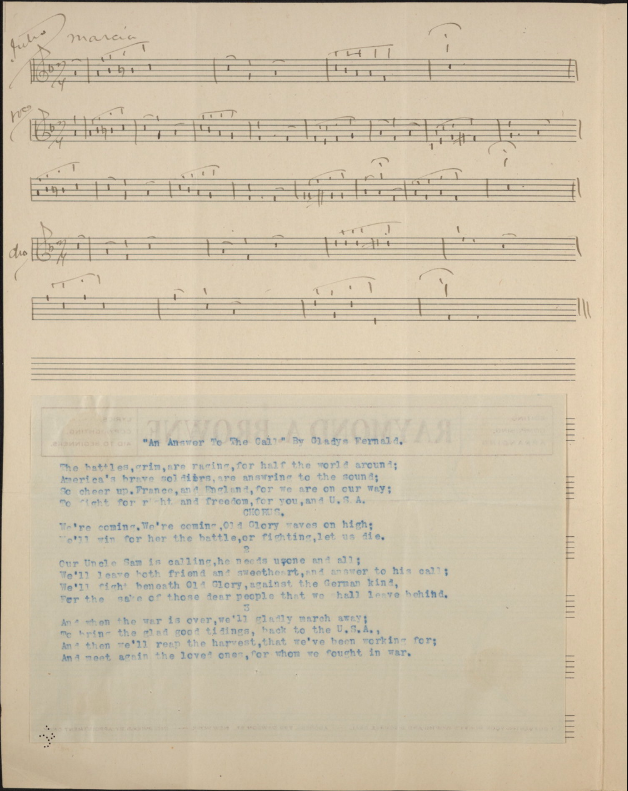 Raymond Browne's "Answer to the Call"

Examples of formatting these pieces can range widely. Some examples include well-printed sheet music complete with a nice cover illustration and piano harmonization; while others are very basic, stripped down to the bare minimum of having the client’s lyrics pasted on to a handwritten score of the melody. The latter consists of nothing other than a simple melody that can be as short as a four-bar intro, an eight-bar verse, and then followed by an eight-bar chorus. Without any harmonization or cover, pieces from Raymond Browne’s publishing company offer an example of the minimum service vanity press publishers offered. Interestingly, pieces from Browne’s publishing firm have clearly noted sections – Intro, Verse, and Chorus. As early as 1911, M. DuFrerre was also offering this minimum service of putting text to song without harmonization or fancy sheet music cover illustrations. 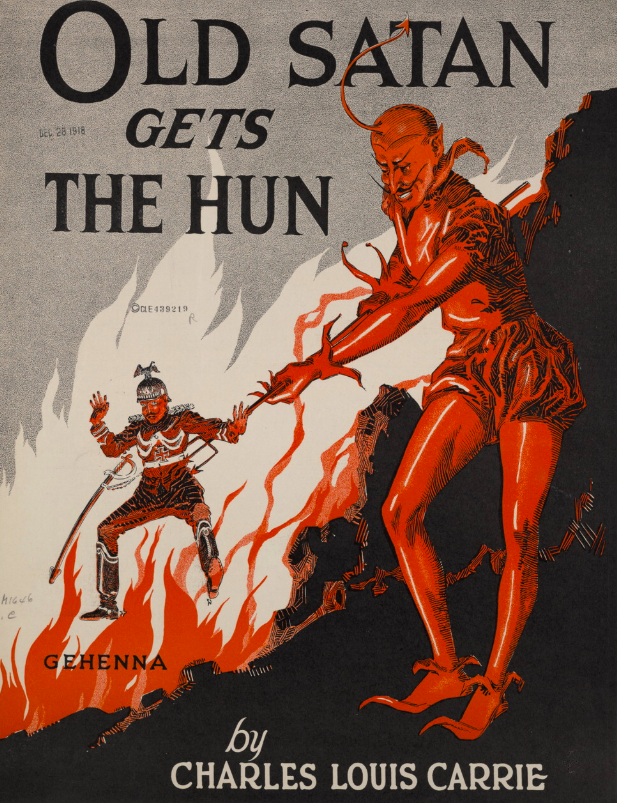 Just like the Tin Pan Alley songs, these non-commercially published songs may feature similar themes including sweeping away German U-boats from the sea and contrasting democracy and autocracy in agreement with President Wilson’s declaration “The world must be made safe for democracy.” Also included are themes portraying the German Kaiser as the “evil Hun.” The writer asks for sympathy for “Bleeding Belgium,” and emphasizes the strong relationship between France and America by including the Marquis de Lafayette in the lyrics. Further similarities include the standardized appearance of the tall Uncle Sam with a goatee, the centralized appearance of the U.S. flag, and the traditional roles of women at home. Women were portrayed as the faithful wife, the supportive sweetheart, and the devoted mother. 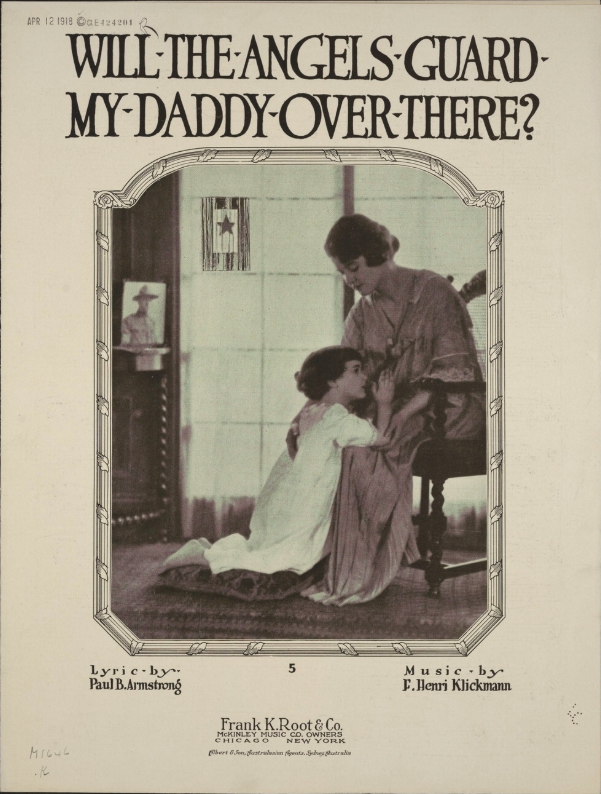 Mother, wife, and child are common themes about home in both commercial and vanity press collections. Notice the service star hanging from the window. 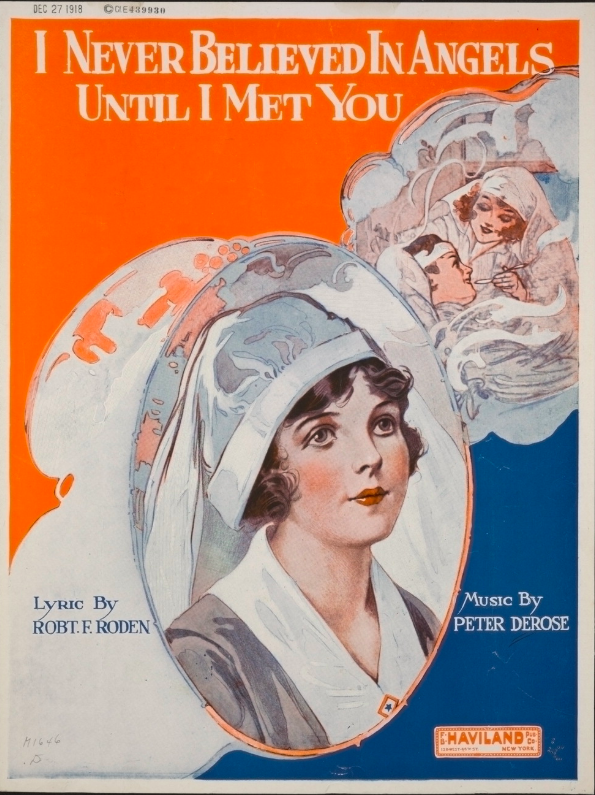 Another notable female representation included a young woman rallying young soldiers to the war. The female personifications of Liberty and Columbia dressed in Roman and Greek garb often graced sheet music covers. As a symbol of France, Joan of Arc often appears both in commercial and non-commercial sheet music covers. When it comes to depicting women doing war work, commercial publishers often portray women as nurses tending to wounded soldiers and Salvation Army girls distributing coffee and donuts on the frontlines.

However, vanity press publishers also feature nurses and Salvation Army girls, but are depicted as working on the home land such as the Women’s Land Army, and women working on the railroads. Since the men were fighting in Europe, women took these domestic responsibilities that were usually done by men. “The Conductorettes” and “We’ll Keep the Tracks Safe For You” are songs that document women railroad workers during wartime operations. These the only surviving musical account of the nationalization of the railroads from 1917 – 1920. Perhaps by taking over work traditionally held by men, leaders of the women’s suffrage movement were also able to gain momentum and ultimately be granted the right to vote in 1920. Thus, these non-commercially published songs offer insight into historically significant topics.

Vanity press pieces are unique because some selections express personal experiences and realities of common war themes, mostly dissenting from the mainstream, since these songs were not intended to be commercially marketed. “Heaven,” a song written in memory of the composer’s sister who was killed serving as a nurse in the war, shows the reality that young women serving in the front were prone to danger just as the soldiers they 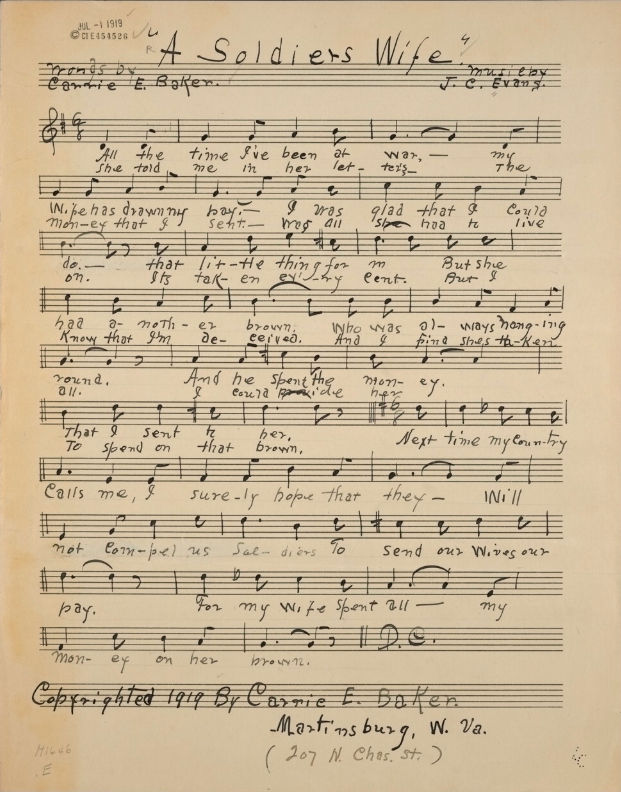 Manuscript for "A Soldier's Wife."cared for. Another experiential song, “A Soldiers Wife,” portrays an unfaithful wife. This is a far cry from the Tin Pan Alley songs and the songs endorsed by the War Department (as will be discussed in the next chapter) that depicted a faithful wife always waiting for news about her husband and his return home. “A Soldiers Wife” is also unique since in cases of disloyalty, it is usually the husband rather than the wife who commits the act.1 The subject of disloyalty is in itself rarely depicted in songs from this period. Political dissent and criticism are also common themes. After the armistice and the dissolution of the CPI, there were songs published that criticized the 1918 Meuse-Argonne Offensive especially in “What has Pershing Paid for Dead Man’s Hill.” 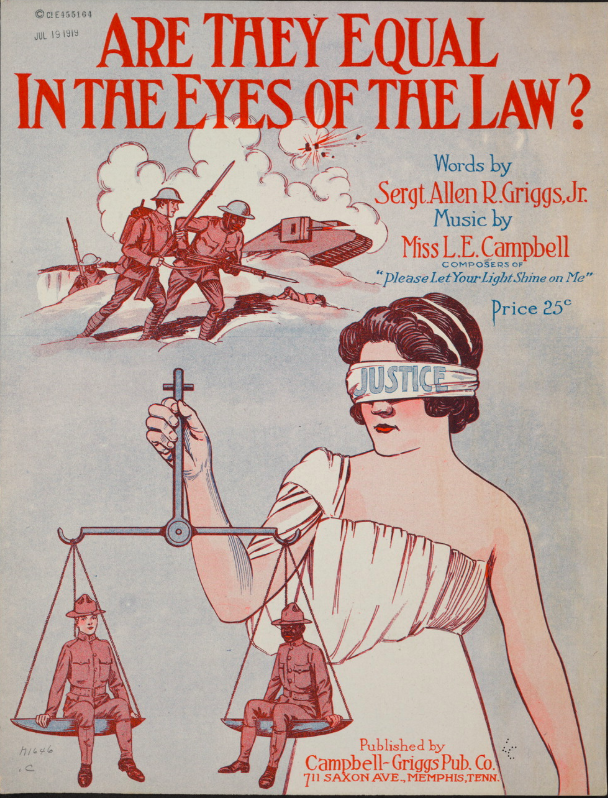 Similarly, dimming postwar hope and disillusionment is seen when describing the plight of the returning disabled veterans especially when looking for employment opportunities. This issue is summed up in “Are They Equal in the Eyes of the Law?"

These examples of personal and experiential songs found by thoughtfully examining manuscript deposits and vanity press publications lead the modern-day reader to think what sources could have inspired the lyricist to compose these songs.

1. In 1909, Harry Von Tilzer from Tin Pan Alley published “I Love, I Love, I Love My Wife – But Oh! You Kid!” Although not popularly received perhaps due to its controversial subject and content, this song opened a new door in expressing infidelity through song at Tin Pan Alley.

A large part of this research on the Vanity Press was directly based on Paul Fraunfelter's lecture on World War I Sheet Music given at the Library of Congress on April 4, 2017. Click the link to access the LOC lecture https://www.loc.gov/today/cyberlc/feature_wdesc.php?rec=7901.