Facts About Pennsylvania in the First World War

On March 19, 1917 the Navy became the first branch of the U.S. Armed Forces to allow women to enlist in a non-nursing capacity.  On March 21, 1917, Miss Loretta Perfectus Walsh of Philadelphia, 21 years of age was the first woman to enlist in the United States Navy under this new rule. 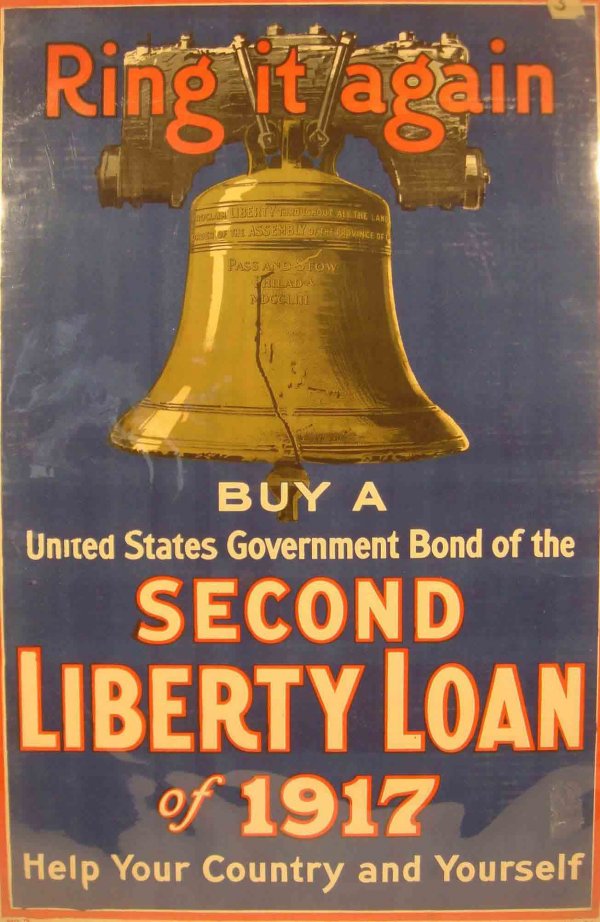 Pennsylvania produced nearly one half of the munitions supplied to the United States Army, a large proportion of the ships supplied to the Navy, all of the anthracite and most of the bituminous coal to the nation during the war.

Seventy-five percent of the military’s boots and shoes came from Philadelphia tanners.

Before America entered the war, Chandler Field, in Essington, PA was one of only 4 aviator training facilities in the USA, and the only one on the East Coast.  Located on the Delaware River west of Philadelphia, Chandler Field was used to train seaplane pilots.

A new rifle factory, built and leased to Remington Arms Company of Delaware, on the Baldwin Locomotive property at Eddystone, PA,  produced 2.2 million rifles, Pattern 1914 Enfield rifles for Britain and Model of 1917 rifles for the United States.  Roughly two-thirds of U.S. infantrymen in France were armed with the Model of 1917, with most of the others carrying the Model of 1903 Springfield rifle.  Both U.S. rifles used the same .30-06 ammunition.   The plant was later acquired by Midvale Steel and Ordnance Company.  A second large plant erected on the Baldwin property housed the Eddystone Ammunition Company, fulfilling an order for artillery ammunition from the British Government.  With the British contract satisfactorily completed in 1917, this plant was kept in service making ammunition for the United States Government, organized under the name Eddystone Munitions Company.  The plant continued in operation until after the armistice, its capital stock owned by the Baldwin Locomotive works.

Enfield-designed U.S. Model of 1917 rifle made at Eddystone

The Philadelphia Ordnance District was the one steel-making region in the country that reached tide water.  It included eastern Pennsylvania, southern New Jersey, and all of Delaware, including the Bethlehem Steel Company which had 35,000 people employed in its plants at South Bethlehem, PA.

The Ford automotive plant at Broad and Lehigh Sts., Philadelphia, switched to making machine-gun trucks, using automotive knowledge to advance military technology, along with 2,749,600 flat-brimmed steel Doughboy helmets.  All work was performed under Henry Ford's specific instructions that no profit was to accrue from any work performed.

The first Philadelphia lives lost in action with the enemy were those of two naval men, Charles John Fisher and Frank Hazelton Loree, who were members of the armed guard on the tanker Vacuum, sunk by submarine on April 28, 1917, in 57 deg North, 10 deg 45 min West.

Private Thomas Enright, of Pittsburgh was one of the first three American soldiers to be killed overseas on November 3, 1917.  He was in Company F, 16th Infantry.  (Private James B.Graham, Indiana and Merle D. Hay of Iowa also died in that same battle)  He is buried in Saint Mary Catholic Cemetery, Lawrenceville.

From the beginning of the war in 1914, some 250 Pittsburgh-area war plants grew by the end of the war to employ 500,000 men and women in non-stop production.

Pittsburgh steel mills produced more than half of the steel used by the Allies in the Great War. Bethlehem Steel in Bethlehem, PA, was a major supplier of armor plate and ordnance to the U.S. armed forces, including armor plate and large-caliber guns for the Navy.  In 1916, bolstered by wartime profits, Bethlehem acquired American Iron and Steel Manufacturing Company, Pennsylvania Steel Company, and Maryland Steel Company.  1914 had seen a slump in American steelmaking, with output well below capacity.  By mid-1915, all mills in the Pittsburgh area were operating day and night, even though the United States had not yet entered the war.  Production throughout 1915 was at about 85 percent of capacity, reaching 100 percent during the fourth quarter.  From 1916 onward, US Steel alone delivered more steel each year than all the plants of the German and Austro-Hungarian Empires combined.  By the second half of 1917, some 75 percent of iron and steel output was supplying war demands.

Pittsburgh Plate Glass made about 20% of the optical glass used in making U.S. fire control instruments (principally telescopic sights and rangefinders) during the First World War.  The U.S. had been almost entirely dependent on German suppliers in 1914, when European optical glass became unavailable.

The Westinghouse Corporation in Pittsburgh by the end of the war in 1918 had made 5,058,000 shells for the British Army.

Labor shortages during the First World War accelerated the mechanization of agriculture, especially through the purchase of gasoline fueled trucks and tractors.  In 1917, the State Department of Agriculture staged the first Pennsylvania Farm Show. 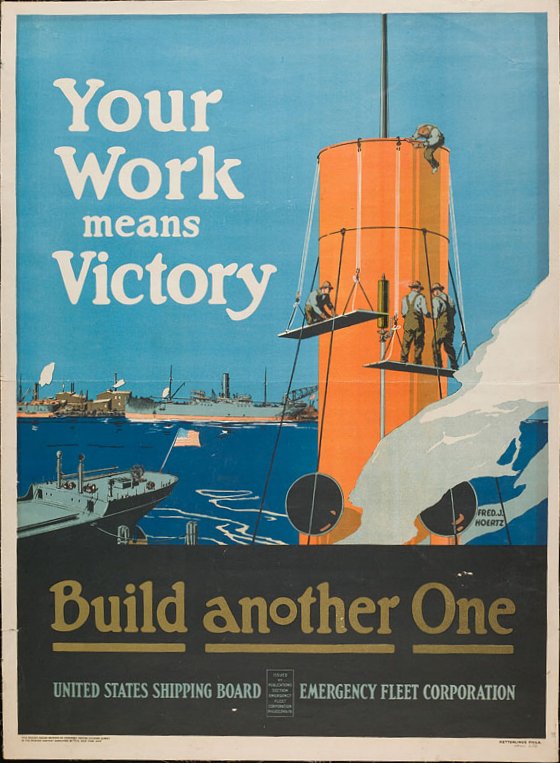 Baldwin Locomotive Works, Eddystone, PA, built 5,551 locomotives for the Allies, including locomotives of various gauges for Britain, France and Russia beginning in 1914, as well as the for the U.S.  Baldwin also completed orders for the machining of a great number of shells, first for the British and French beginning in 1915 and continuing production for U.S. orders in 1917 and 1918 totaling 6,565,355 shells, varying in caliber from 3-inch to 12-inch.

The J. G. Brill Company of Philadelphia had made electric railway cars for many years, and contracted with the Russian government in 1914 to make automobile bodies, portable machine shops, and portable kitchens, with similar equipment subsequently made for the British, French and Belgian governments.  Brill also made three and six-inch high-explosive shell forgings for Russia and Britain, with subsequent production for the United States Government of 4.7-inch shell forgings for delivery to the Frankford Arsenal, Philadelphia.

The Edward G. Budd Manufacturing Company of Philadelphia made 1,160,826 steel stampings for the M1917 Doughboy helmet, delivering them to the Ford plant in Philadelphia where they were painted, the linings attached, and packed for shipment.

The Smith, Kline & French Company made and shipped thousands of pounds of drugs and medical supplies to Army and Navy depots throughout the country, and to the Red Cross in the U.S., France and Italy.

The Midvale Steel and Ordnance Company began work in October, 1915 for the British, Canadian, and French governments providing shells, howitzers, and steel for bayonets and rifle barrels.  Later, it made steel for American small arms, automobiles, and trucks, while forging and finishing 191 8-inch howitzers.  Midvale delivered 150,000 tons of steel between April 6, 1917 and November 11, 1918.

Goldenberg's Peanut Chews were developed in 1917 as a World War I ration bar by Philadelphia candy maker Harry Goldenberg.  Having been popular with American troops, after the war, Peanut Chews remained in production and continued as a civilian product sold regionally by the Goldenberg Candy Company.  They became available in all 50 states in 2006.  The 100th anniversary of the product was noted on the package in 2017.

The first United States Ordnance School was established in 1917 at the University of Pennsylvania, Philadelphia.

Two million people were estimated to have attended the enormous homecoming parade in Philadelphia on May 15, 1919 for the 28th Division.  Along the route were 500 Civil War veterans who turned out to salute the returning Doughboys.

The cruiser U.S.S. Olympia, now moored on the Delaware River at the Independence Seaport Museum in Philadelphia, carried the Unknown Soldier from WW I back to the U.S, arriving October 25, 1921. 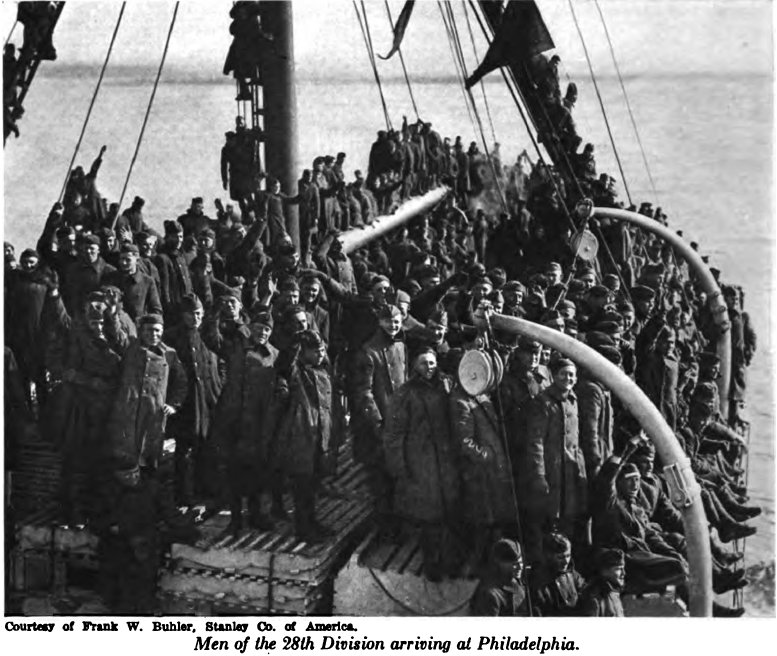