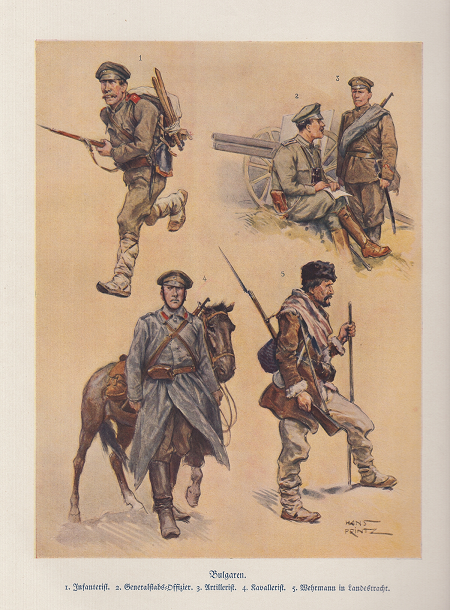 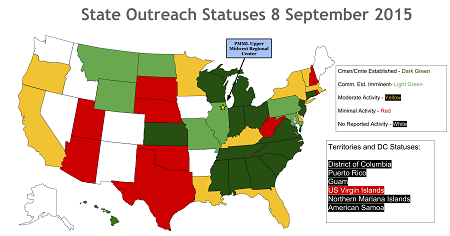 State Outreach Collaboration Call
Every other Thursday, the National State Outreach Team holds a State Outreach Collaboration Call at noon Eastern time. These calls take place every other Thursday at noon, EST. Volunteers and commemorative bodies across the country dial in and talk about what is working in their respective states. It gives everyone an opportunity to network and to partner up.
As seen in the map above, there are only fourteen white states/territories/districts left. White means that we know of no WWI commemorative activity and need to identify a point of contact. Enlighten us if you know better or know a POC!
Volunteer for state outreach. Contact Andrew McGreal if you are willing to help.

Mississippi
Eight volunteers met with Gulfport Mayor Billy Hewes and Chief Operating Officer John Kelly yesterday to discuss plans for Mississippi's involvement with the WWI Centennial Commission's efforts.
Mayor Hewes is on the Bi-Centennial Commission for the State of Mississippi and will share plans regarding WWI with the Bi-Centennial Commission. He will also be in touch with the Governor's office to see how we can coordinate activities.
Additionally, The MS State Board of Education and will pursue the goal of sharing the WWI curriculum/resources with all the teachers in Mississippi. The MS volunteers will also work to get community colleges involved and will pursue the idea of planting poppies along highways in Mississippi.

Illinois
Upper Midwest Regional Meeting - Next Week!
September 16th at the Pritzker Military Museum and Library 11am to 3pm CDT

The Pritzker Museum and Military Library located in Chicago would like to extend an invitation for the volunteer representatives in the Upper Midwest Region--that’s Illinois, Indiana, Iowa, Kentucky,Michigan, Minnesota, North Dakota, Ohio, Tennessee, South Dakota, and Wisconsin--to a collaborative meeting. The purpose of this meeting is to increase contact and coordination between these states’ volunteers and to provide updates on the strides each state has made in the planning efforts for the centennial.
At this gathering, the Commission will provide an overview of the staff support options available to state representatives, as well as the status of the WWI Memorial Design competition and updates from the Commission’s leadership. We encourage you to bring along and share examples of ideas that your state is planning. It is our hope to establish new connections and encourage cross-state collaboration.
Please register for this meeting on the Pritzker Military Museum and Library website or contact Susan Mennenga.
If you are unable to attend the meeting, you can still participate via the Livestream broadcast. Visit the PMML’s Live Stream page on Sept 16 at 11:00 a.m. Central to view the broadcast. You must have a Livestream account to leave questions or comments. You can create your login at Livestream.com.

We are looking for folks to help us man tables at upcoming conventions. Volunteers would talk to visitors about WWI, Commission programs, and the WWI Memorial. Any amount of time you would be willing to volunteer would be immensely helpful to us.

The campaign to revitalize World War One memorials has truly become a national, coast-to-coast effort. Only two weeks after the U.S. World War One Centennial Commission unveiled the five final designs for the renewed Pershing Park in downtown Washington, city leaders in Los Angeles have announced a design competition for Pershing Square, the oldest park in the city. Work on the redesigned park in downtown LA is expected to be completed by 2020, and will be a major factor in the ongoing revitalization of downtown Los Angeles. Learn more about this international design competition here. We will hear from Courtland Jindra, one of outstanding volunteers, next week on how he was a big part of getting this going. You can read about his involvement here on our homepage.

Check out the the five final design concepts for the National WW1 Memorial at Pershing Park on the Stage II Finalist webpage. TPhase II starts today - The finalists are meeting with the WWICC Design Oversight Committee and our technical advisors today at the White House Visitor’s Center here in DC. Today’s meeting will start down the long development process that will refine their original design concepts. The original concepts are open to public comment, and the evolved designs will also be put out on display for public comment prior to jury making a final decision in early 2016.

Gen. Barry McCaffrey, special advisor to the WWI Centennial Commission will receive the US Army Infantry School’s 2015 Doughboy Award on September 15th, at the National Infantry Museum in Columbus, GA.
The Doughboy Award recognizes an individual for outstanding contributions to the United States Army Infantry. The award is presented on behalf of all Infantrymen past and present and is the highest honor the Chief of Infantry can bestow on any Infantryman. Congratulations to Gen. McCaffrey from all of us at the WWICC.

To Eric Marr, Nancy Schaff, and Chris Leins -our Maryland volunteer team - for putting together a Maryland WW1 Network and its first meeting.

Would you like to see some great videos on YouTube about WWI? Check out The Great War Channel. Posting twice a week, ‘The Great War’ shows you the history of the First World War in the four years from 1914 to 1918. The host, Indy, takes you back week by week and shows you what was going on in the past. Please subscribe to see these great posts. Their lastest two videos are:

The Schlieffen Plan - And Why It Failed: THE GREAT WAR Special feat. AlternateHistoryHub
Published on Sep 7, 2015. The Schlieffen Plan was the blueprint for Germany's army to avoid a two-front war with Russia and France. It was supposed to be the solution for a quick victory against arch enemy France by invading Belgium and the Netherlands to circumvent French defenses. Helmut von Moltke adapted the original plan by Alfred von Schlieffen and ultimately failed when the Germans were beaten at the Battle of the Marne. Indy explains the numerous reasons why the Schlieffen Plan was doomed to fail.

The Western Front Awakens - The Tsar Takes Over: THE GREAT WAR - Week 58
Published on Sep 3, 2015. The Western Front has been relatively quiet the whole summer while the Russians were on their Big Retreat. The French and British generals have been busy trying to find a new strategy to overcome the stalemate. The Germans weren't sitting idle while awaiting the next big French offensive, they fortified their positions even using concrete. At the same time in the East, Tsar Nicholas II personally takes over military command and fires Grand Duke Nicholas Nikolaevich for the catastrophic casualties the Russian Army faced this summer. But his timing could not be worse.

Bulgaria in World War One 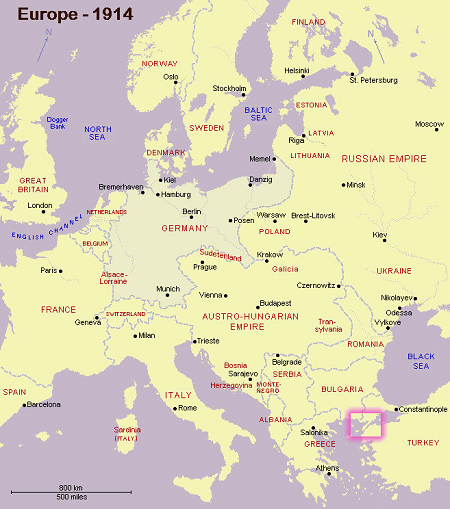 The minor country of Bulgaria played a role in World War I completely out of proportion to its size and international influence.

Bulgaria had been shortchanged in their territorial ambitions after the Balkan wars of 1912 and 1913. It had fought in the First Balkan War with Greece, Serbia, Montenegro and Romania to expel the Ottomans from Macedonia and Thrace, but fell out with them over the division of spoils. In the Second Balkan War they fought their former allies to gain Macedonia. Failing to gain any territory in this second war, they were compelled to sign the Treaty of Bucharest that left Serbia dominant in the Balkans and Greece dominant on the Aegean at their expense.

Bulgaria, however, a nation of 4.5 million citizens could mobilize an army of 1.2 million soldiers. It was this disproportionately large military force and its strategic location that made Bulgaria an increasingly attractive ally as the war unfolded. By 1915, the Bulgarians were they subject of a diplomatic bidding war between the rival coalitions. By September they Central Powers had won the bidding war. In October Bulgaria would declare war on Serbia.

Overlooking their historic hatred of the Turk, they entered the Great War in 1915 on the side of the Central Powers with the single objective of reversing the Treaty of Bucharest. They subsequently helped force the Serbian army to abandon their own country, drove the French and British forces back to the Salonika perimeter, participated in the defeat of Rumania, and, for over two years were the principal guardians for the Central Powers of what had become a double “backdoor” into central Europe and Turkey.

But playing a major role in a World War proved exhausting for the small country. Unification with Macedonia was the main reason that Bulgaria had entered the war. But by the summer of 1918, Bulgarian troops in the field and civilian populations at home were increasingly demoralized by food and material shortages and by a war weariness that spanned back to the Balkan Wars of 1912-1913. Over 66,000 Bulgarian soldiers had died and over 110,000 were wounded in the Balkan Wars of 1912-13. 90,000 more were killed in the nation's three-year involvement in the Great War. An Armistice was signed on 30 September 1918, opening the double back door. It was the end for the Central Powers. Bulgarian soldiers marched on Sofia in a state of rebellion to obtain satisfaction for their sufferings. Only the abdication of Tsar Ferdinand and the efforts of loyal troops and some German units thwarted this attempt to establish a revolutionary republic in Bulgaria.

In the Treaty of Neuilly, Bulgaria was forced to pay reparations, lost its outlet to the Aegean Sea to Greece and other territory to the Yugoslavia and Romanian possession. Boris III kept the country in political turmoil until the Second World War when he chose, like his father, to align with Germany. Then, the Communists came to power, to round off a nearly catastrophic 20th Century for the small nation. 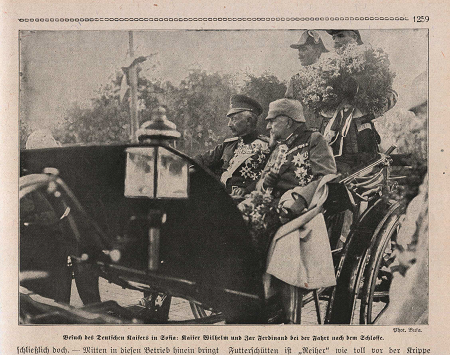