A disaster for 332nd American Regiment *

September 1918 — Yesterday during the training by the Arditi an American Captain, personally operating a Stokes mortar, was amused like a boy to see his projectiles flying in a wide arc over the waves of the Arditi, and seeing them burst with thunderous crashes on the barbed wire of imaginary enemies. The Arditi, without any fear, rapidly advanced to the ambush, while the artillery shells buzzed over their heads. They then threw, a furious stream of bombs, on the enemy trench, already devastated by the Stokes shells and flamethrowers.

Around the Stokes mortar many American officers were gathered and many Arditi with Major Allegretti. The exercise, for those good Tommys [Sammies], was just wonderful and they were demonstrating their feelings by shouting and laughing loudly.

Suddenly at one Stokes mortar, out of the mouth of the tube, instead of flying to the target, exploded immediately with an immense roar and sowed carnage all around.

Major Allegretti, in one of those inexplicable, miraculous instances so frequent in war, had just stepped away; now eagerly came running. Four dead (three American soldiers and the Captain who launched the Stokes) lay on the ground torn by the grenade; twenty wounded of varying severity groaning in pain.

They frantically determined the most in need of care: the very serious wounded, including an American Lieutenant Colonel, were transported in a mad rush by ambulance to the hospital in Custoza.

One of my Bersagliere named Ciccone had lost an eye and was concerned not so much for himself, poor boy, was more concerned about the fate of his American comrades. He shouted: "Treat them first, treat them first!"  Waiting for his turn, his face horribly bloody, in resignation.

We were dismayed and expressed our affectionate condolences to our colleagues of the 332nd who thanked us calmly and, one might say indifferent to the disaster, responding: "C'est la guerre!"

The funerals of the victims of the disaster were arranged. The number of dead had risen by four who had died at the hospital to seven. Three wounded, including the American Lieutenant Colonel. Our battalion is brought rapidly to Villafranca; long rows of Arditi lined up along the streets of the village to the cemetery. From all over came a host of senior officers and general officers to pay tribute and give a last farewell to the heroic dead, and to express grief for the late comrades of Italy. We waited in the sun, on the outskirts on the road to Custoza, where soon appeared the immense funeral procession.

In the lead was the band of the 332nd, in twelve rows, that played the sorrowful funeral march of Chopin; followed by a rifle company and, at a distance, the seven bodies, shrouded in the American flag, placed on seven cannon carriages. Lastly, in close order, the regiment marched. The entire population of Villafranca flowed emotionally on to the streets: men stood with their hats off and women knelt.

We arrived at the cemetery.

I saw the seven graves were lined up, freshly dug, with mounds of dirt in one corner. The coffins were brought in. The Companies lined up among the graves on the pathways. It was a solemn silence, touching. 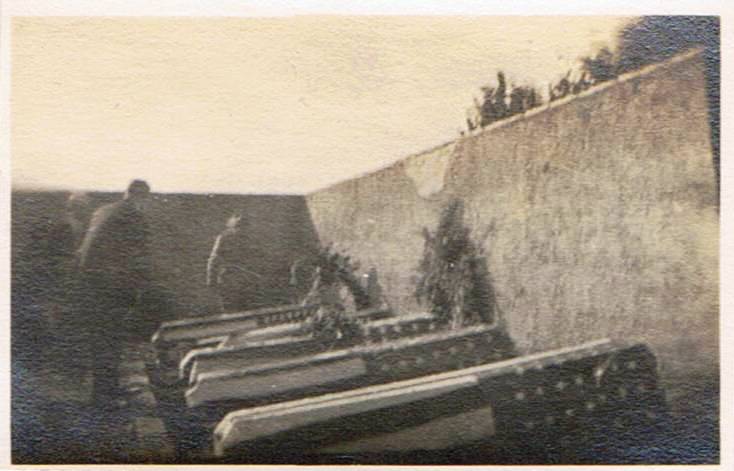 September 14, 1918 — Villafranca di Verona, Italy cemetery: Funeral for the 332nd Infantry soldiers who were killed or died of wounds by the premature explosion of a Stokes trench mortar shell during training at the at the Borghetto sul Mincio maneuver grounds on September 13, 1918.

Colonel Wallace spoke first, next Colonnello Taccoli of the delegation, finally the Mayor of Villafranca who said he is proud to guard the bodies of the dead heroic allied brothers. Last spoke the Catholic and the Protestant chaplains, not brothers in faith, but in the good.  When the remains were to disappear from the light of life, a rifle company, ordered by strong and terse commands, fired three volleys of rifle fire upwards, into the unknown.

Those were moments of solemnity and immense emotion.

The courageous soldiers of America, died for the Italian homeland, entered in the heroic cohort of brothers-in-arms of other lands, died in this land of Italy for an idea, they went down thus to their graves in Villafranca to become brethren to the souls of the valiant of '59 and '66 buried therein. 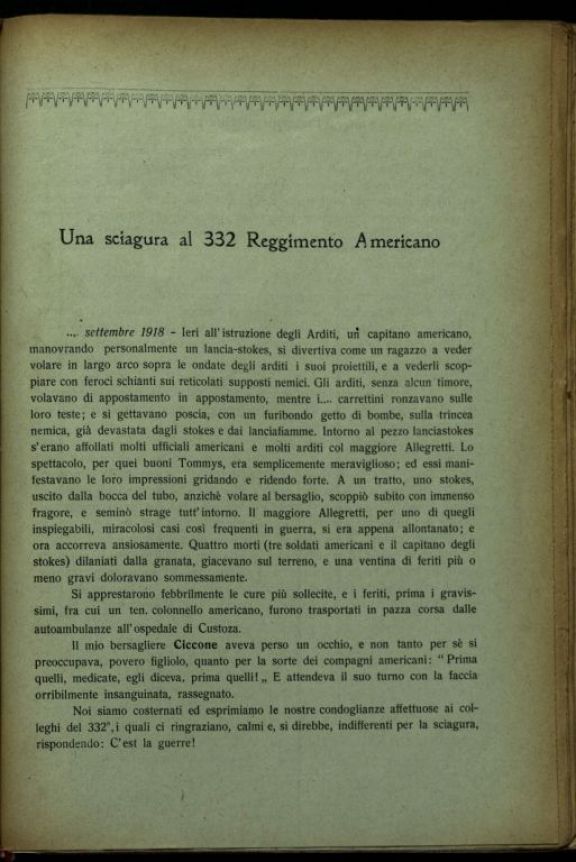 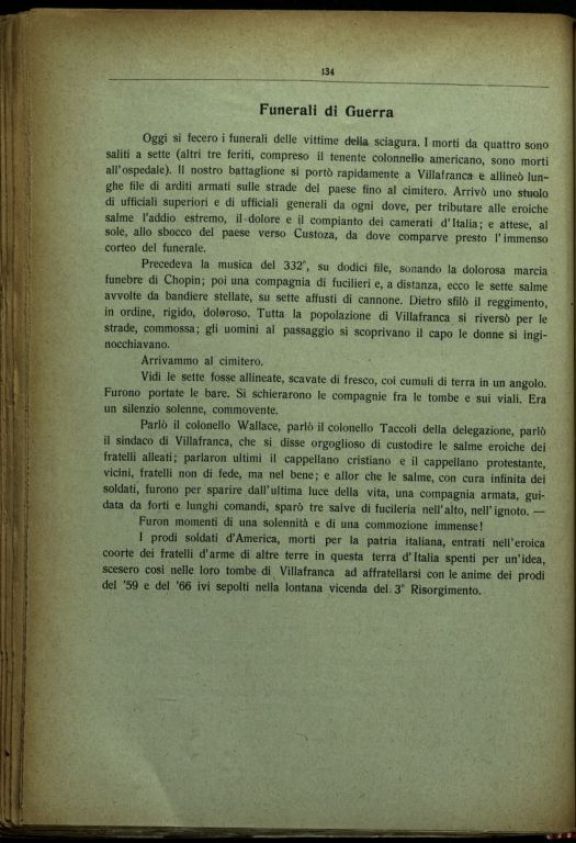 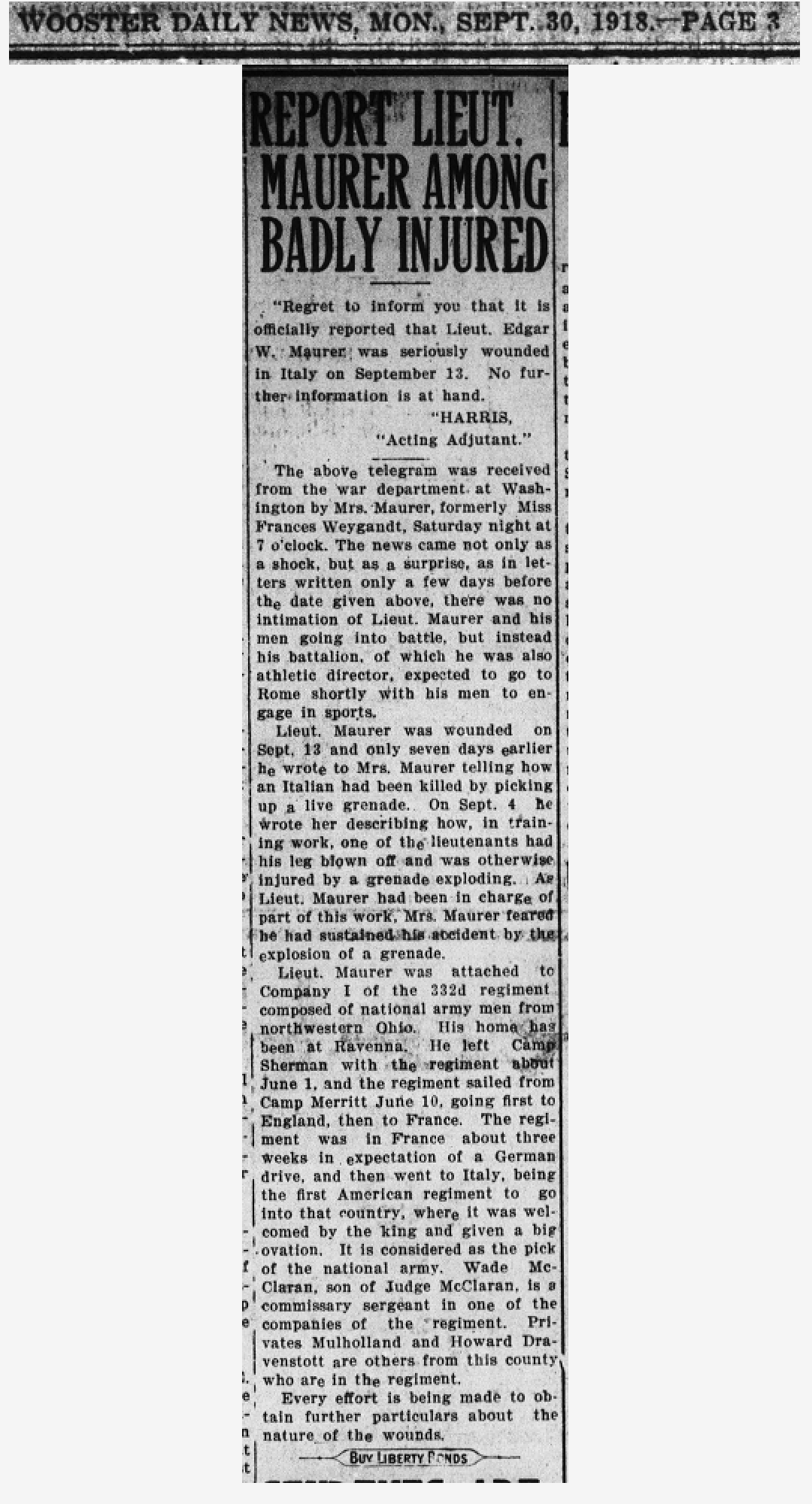