The Growth of the Popular Music Industry

The energetic publishing industry of Tin Pan Alley, the growth of recordings, and the increasing marketing strategies to promote this music, meant that popular music enjoyed 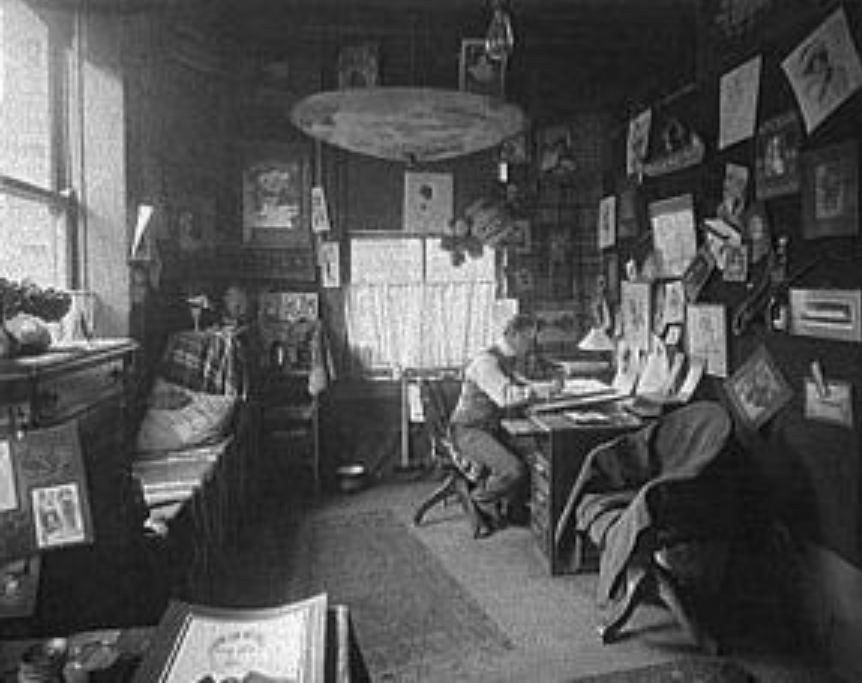 A sheet music cover artist hard at work. a huge crest of success during the early twentieth century. Still, some pieces stood out even more than others, and one of those was “Take Me Out to the Ball Game” (1908). While technological changes with the advent of radio and recording would eventually help in popularizing new music from Tin Pan Alley, sheet music was at its heyday when America joined the war in 1917. 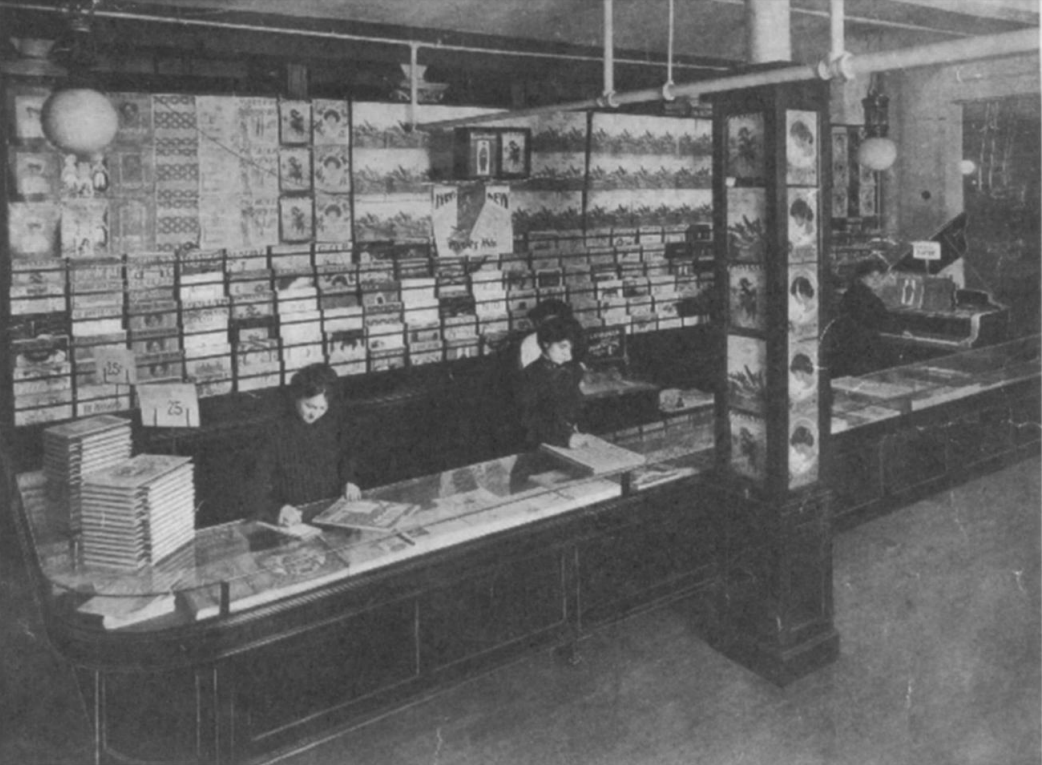 A typical scene inside a music publisher's storefront. Notice that all the employees including the song demonstrator seated at the piano are women.Given Tin Pan Alley’s main function to sell sheet music as much as possible to the public, music publishers had to devise strategic marketing strategies. They hired “songpluggers” whose job was to promote the music sold by their publishing firm. Essentially, songpluggers were the lobbyists between the publisher and the public.24 They used a variety of means to market the songs like “pounding the piano” in the publisher’s offices to demonstrate new music to customers. Lesser known vaudeville performers often visited Tin Pan Alley publishers to find new songs for their shows while publishers gave free copies of the songs and even paid famous singers to showcase the songs in nightclubs or in vaudeville in hopes of catching the public’s attention.25 Similarly, publishers asked famous singers to record their songs to attract attention. This is another reason the famous World War I song, “Over There,” was recorded. The song immediately became popular with Nora Bayes and Enrico Caruso. During World War I, Bayes and Caruso devoted their talents and popularity 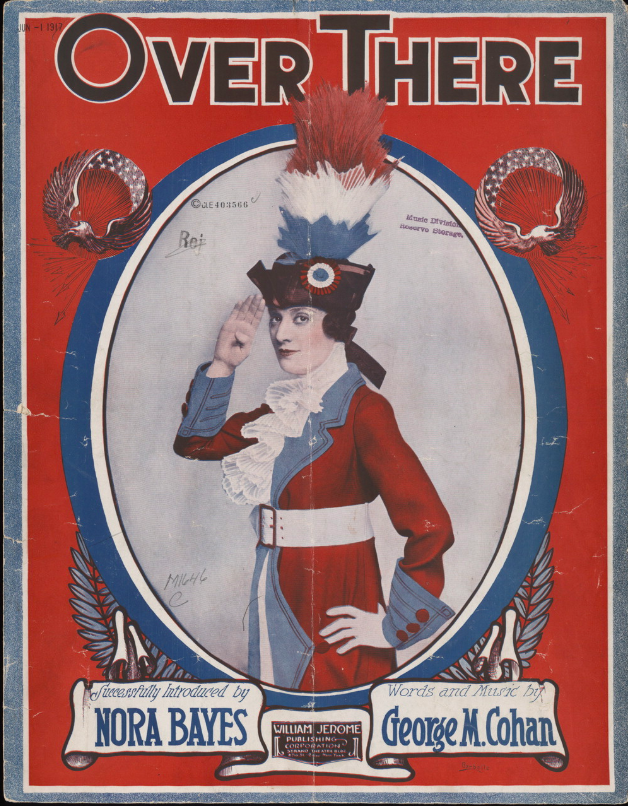 Sheet music cover for Cohan's Over There with Nora Bayes on the cover. To listen to Enrico Caruso sing this piece, click the link. https://archive.org/details/overthere1918 doing extensive charity work to raise money for war-related expenses. They also participated in Liberty Bond drives. Songpluggers persuaded producers to interpolate songs into musical comedies and revues. In later years, performers would feature new songs in their radio programs. Thanks to Tin Pan Alley, many composers such as Irving Berlin or George Gershwin, got their start in popular music as songpluggers. 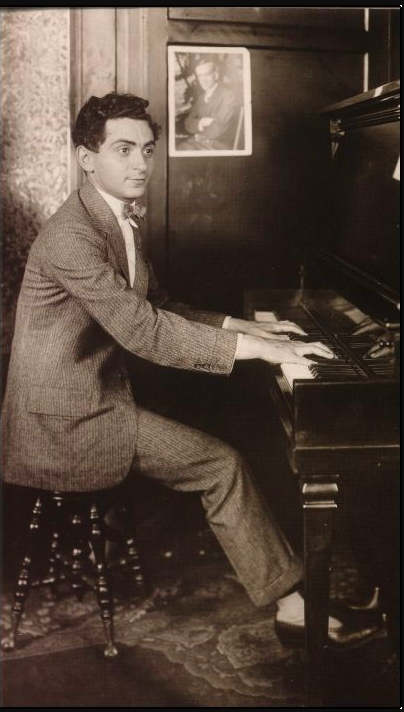 Publishers also hired song promoters or “plant” whose job was to sit in a theater and rally the audience into singing the chorus numbers sold by his firm. Anonymous accounts of song promoters are published in The Tin Pan Alley, A Chronicle of American Popular Music.

I get to a town after the music has been placed in the hands of the leading music houses. I arrange with two or three theaters to aid me in introducing the song.

Maybe I go to the swellest theater in town Monday night and sit in a lower box, in my evening clothes, like an ordinary patron. During the daytime I will have fixed the orchestra and had the music run over. Between the first and second act, perhaps, I stand up in my box and begin singing.

The audience is startled. Ushers run through the aisles. A policeman comes in and walks toward the box. About the time the policeman is where he can be seen by all the audience I step out on to the stage in front of the curtain and begin the chorus, with the orchestra playing and the audience, that is now onto the game, clapping so hard it almost blisters its hands.

I have, maybe, a good whistler in the gallery, whom I have taught during the day. He helps me when I begin teaching the gallery to whistle the chorus. He leads the gods and before I have done they and the whole house have caught the air.26

It is interesting to wonder how effective this method would have been when Tin Pan Alley began popularizing war-themed songs in theaters. Just imagine patrons going home humming patriotic tunes they just learned. There is no doubt that songs contributed to effectively calling all Americans to support the war. 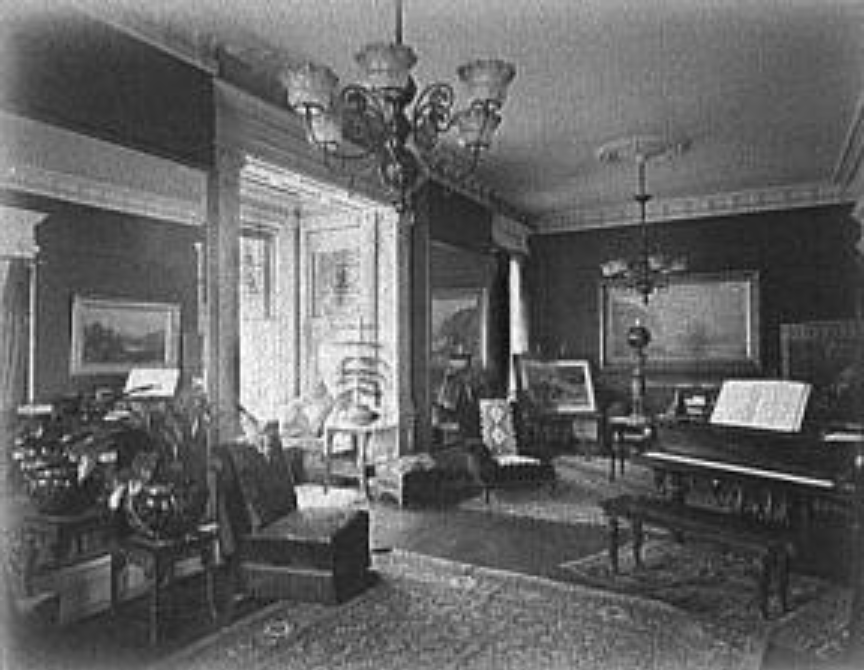 A typical upper-class home music parlor from the early 20th centuryThe market for sheet music was catered towards the average American citizen. The public’s thirst for Tin Pan Alley songs was enhanced by the increasing number of pianos finding their way into American homes.27 Owning a piano was very popular in the early 20th century that it was considered a household good just as 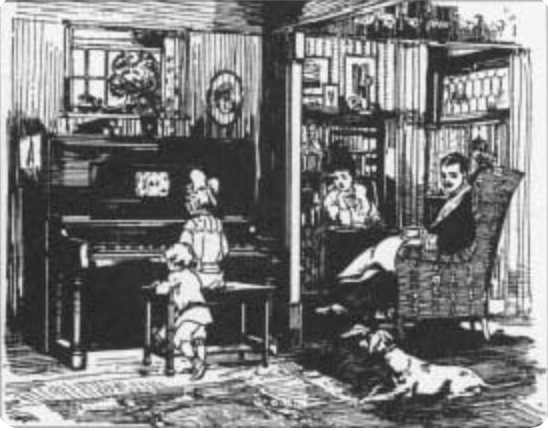 Advertisement for a Beckwith player piano from the 1915 Sears Roebuck catalog. This illustration may show how middle-class families gathered around the piano for entertainment. important as a sewing machine.28 In 1900, some 130 piano factories were based in New York alone to satisfy the increasing demand of customers. These same customers bought Tin Pan Alley songs for home entertainment proving that music could also serve a social purpose. This musical conversation mode of home entertainment is also seen in barbershop singing. The genre was a new craze that used four voices to support a melody in tight harmony, oftentimes using intervals of tritones and seventh chords, with no instrumental accompaniment. The popularity of this genre encouraged people to "try this at home," so Tin Pan Alley songs were sometimes reinterpreted in this style. Guided by commercial motives, people also began buying “how-to” handbooks on songwriting in hopes of becoming successful songwriters. Breaking down its complexity for those without formal musical training, authors of these handbooks reduced songwriting into simple steps. They advised aspiring songwriters to keep lyrics and melodies simple in AABA form and concentrate on moving human emotion in order to maximize sales of sheet music.29

24 Goldberg and Jablonski, p. 203
25 Just as publishers paid famous singers to sing their songs, piano makers also paid artists to play their instruments. As an advertisement strategy, both publishers and piano makers were aiming for greater prestige, sales, and profits. Loesser, p. 536
26 Goldberg and Jablonski, p. 207-208
27 During the late 19th century, the prices of pianos were lowered in order to accommodate the demands of low-income customers. The upright piano became the standard size for small residences of less moneyed people. Loesser, p.521 and 565
28 Loesser, p. 561
29 Suisman, p. 22; Indeed, in 1906, Charles K. Harris wrote How To Write a Popular Song. This was a handbook for aspiring songwriters. The book is filled with do’s and don’ts and how to present a manuscript to a publisher and sell it successfully. Simple in its format, the text of this handbook targeted those who wanted to get into the business of selling music without formal musical training.