Tin Pan Alley, Where it all Began

By the start of the twentieth century, every nation had its music publishing houses, and in the United States, the leading publishers were all clustered along 28th Street in New York City. Bustling with excitement, 28th Street attracted a steady stream of songwriters, vaudeville and Broadway performers, and musicians. Publishers had pianos in their front offices so that prospective buyers could try out sheet music before their purchase. If you strolled down Union Square during a hot summer day in 1900, your ears would have met a strange sound. The humid New York air kept their windows open to get some little relief from the sweltering heat while dozens of song writers working out songs on pianos. Professional song-writers, each vying to attract customers, worked tirelessly to mass produce songs and think of new melodies and lyrics. Their job was to compose songs that would sell and make a fortune for the publishers who printed them and perhaps an opportunity to advertise their songs in hopes to allure customers. It’s interesting to imagine what kind of musical rhetoric this atmosphere would have evoked. 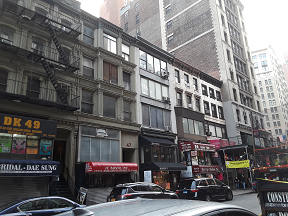 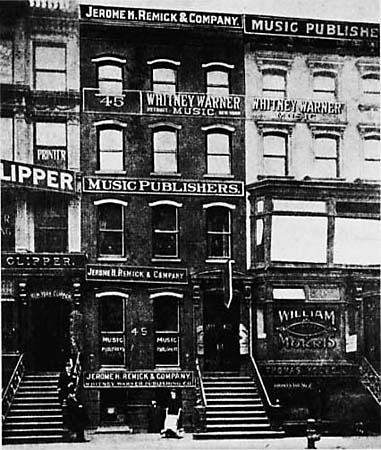 How the name came about?

A journalist for the New York Herald, Monroe Rosenfeld, came to visit the offices of the music publisher Harry von Tilzer on 28th Street. With all the noise, he reported that the racket from the neighboring businesses was deafening. During the interview, Von Tilzer said “It’s always reminded me of kitchen clatter, just like tin pans.”1 Rosenfeld agreed and said, “Your Kindler & Collins sounds exactly like a tin can. I’ll call the article ‘Tin Pan Alley.”2 This then begs the question, who played on and what kind of pianos were used during this time. Many scholars have dismissed the term as derogatory reference to the collective keyboard banging of song-writers while musicologist Katherine Charlton says the "term Tin Pan Alley referred to the thin, tinny tone quality of cheap upright pianos used in music publisher's offices."3 It is difficult to determine the origin since Rosenfeld’s article did not survive and there were no contemporary references that connected Rosenfeld 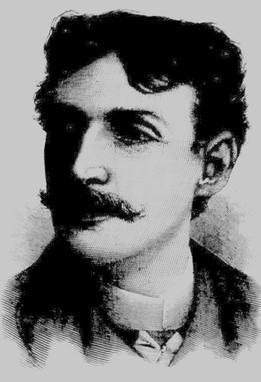 Monroe Rosenfeld and the term Tin Pan Alley in any way.4 During the late 19th century the terms “tin pan” and “tin panny” were known as derogatory terms to describe mass-produced goods. Newspaper and magazine advertisements often characterized cheap inferior pianos as “tin panny.”5 Gimbel Brothers Pianos went so far to link cheap pianos to bad taste: “The child who has to do dreary practicing on a tin-panny piano is forming a low taste for music or killing all taste.”6 In the presence of cheap pianos, expect nothing but bad sound. Call it mass production or a way to cheat customers of their money, mass production of sheet music is no different to mass producing pianos. In another version, Von Tilzer modified his expensive Kindler & Collins piano by placing strips of paper down the strings to give the instrument a more percussive sound. Considering the soundscape produced on 28th Street, the rhetoric evoked would have been a capitalistic industrious American identity that had little regard to quality. American society rather emphasized the quick selling of products that meant faster cash flow. This is important to consider when placing Tin Pan Alley in the context of public opinion. Tin Pan Alley composers composed music that was simple, cheap, mass-produced, and yet appealing to the American public though not necessarily sophisticated. These composers were already veterans in persuading the American public to buy their songs. If anyone knew how to communicate a message across to the people, no one was better than the song-writers on 28th Street. 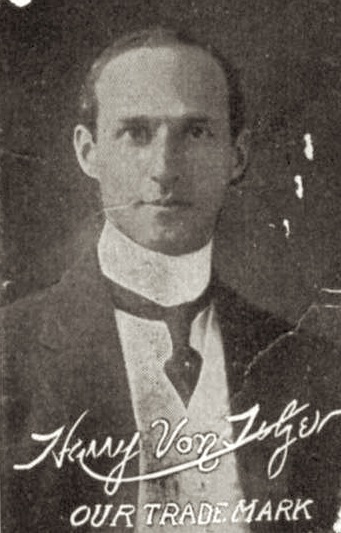 Whatever the origin, the name “Tin Pan Alley” certainly stuck and quickly became the general term for the kind of music that these businesses published—the catchy “hits” that dominated American popular music from the 1880s to the 1950s. The output of these publishers ran to the millions. For instance, during the years from August 1914 to August 1919, the Library of Congress produced its annual Catalogue of Copyright Entries, and some 111,973 songs were filed for copyright protection during that time, about 35,600 were devoted to patriotism and the war effort. Not all were actually published, but at least 7,300 war-themed titles were known to have been printed.

1Shepherd, p. 2
2Napier-Bell, p.7; quoted from Goldberg and Jablonski
3Charlton, p.3
4The only surviving reference to the term Tin Pan Alley comes from Roy L. McCardell’s May 3, 1903 article for The World, "A Visit to 'Tin Pan Alley,' Where the Popular Songs Come From." In a well-argued essay, “Tin Pan Alley Allegory,” Keir Keightley argues that the term comes from a social criticism of America's industrial overproduction of culture rather than from a single person. Further, the term “condenses and communicates such concerns. [...]its advent marks a moment of struggle over definitions of the popular in modernity (whether that definition is "of the people," "liked by crowds," or "mass-produced and widely-disseminated." Keightley, Keir. "Tin Pan Allegory." Modernism/modernity 19, no. 4 (2012): 717-36.
5"With proper care and attention a good piano should last a family a lifetime. If this is not given it the piano will in time become harsh and 'tin-panny' . . ." ("A Toney Affair: Such May Be the Properly Called the Celebrated Mathushek Piano," Pomeroy's Democrat 29 Sept., 1877, 3). M.A. Malone Pianos and Organs ran an ad: "Kitchen Utensils are all right in their proper place, but not in the parlor. Don't have a tin-panny Piano" (The State 30 April 1894, 4). The enduring quality of an authentic Krell piano is contrasted with that of inferior imitations in this ad: "Often pianos are made to sustain this [Krell-like] tone for a while. They cannot sustain it and rapidly become what is called tin-panny" (ad for Edw. Malley Co. in New Haven Evening Register 15 May, 1899, 7). For a most explicit linkage of bad pianos and charivari, see the 1894 advertisement for Steinway Pianos: "Sweet Tones . . . Can be produced only on good pianos. The old rickety instruments bear a closer resemblance to a tin-pan brigade than to music. When buying a piano get a good one" (Kansas City Star October 27, 1894, 5). Keightley’s article discusses mass-production of pianos during the early 1900s and the risk of producing inferior products. Sellers often deceived customers by producing low quality pianos with fraudulent labels like “Steinweg” stamped on the cover of the piano to imitate authentic ones.                                                                                                                  6Advertisement in Philadelphia Inquirer 18 April, 1900, p.3.