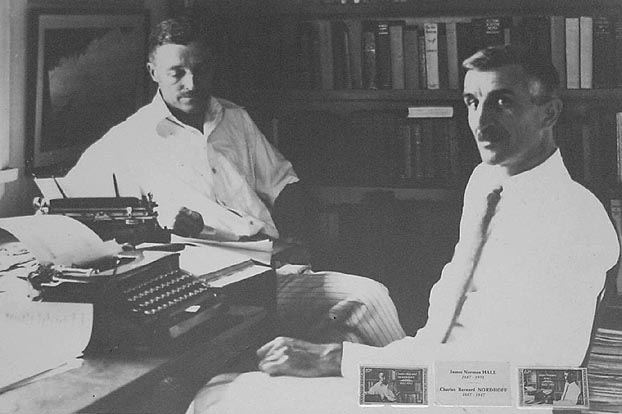 Shared war experiences often forge the most unbreakable of bonds, and perhaps no friendship in the Lafayette Escadrille was stronger than that between Charles Nordhoff and James Norman Hall. While their lives before the war mirrored and diverged in intricate ways, they emerged from the battle as lifelong friends and literary collaborators, producing some of the most popular works of the 20th century, including Mutiny on the Bounty.

James Norman Hall was born in Iowa in 1887, and from an early age, aspired to be an adventurer, traveler, and writer. However, his early writing career was less than successful; he took to papering his room with rejection slips from publishers. During a trip to Britain to visit his idol, Joseph Conrad, world events conspired to provide Hall with the adventure and writing material he sought. When World War One broke out, the overly-adventurous Hall joined the Lord Kitchener’s expeditionary force, claiming that he was a Canadian, and thus eligible to join the British Army. Hall fought in some of the worst early engagements of the war, including the devastating Battle of Loos. Despite his service, the discovery of his true nationality resulted in an honorable discharge, and he returned to the US. Hall took his experiences and converted them into a bestseller, Kitchener’s Mob, which finally gave the young author the eminence he desired. Offers to cover the war for various magazines began rolling in, and when Hall heard of the newly formed Lafayette Escadrille, he decided to return to France and cover the Escadrille for the Atlantic Monthly. It was not long, however, before the adventurous Hall could no longer content himself with just writing about the Escadrille; he enlisted with French aviation on October 11th, 1916, joining the Escadrille the following June.

Indicative of his adventurous streak, Hall’s time as a pilot in France was filled a variety of adventures and experiences. Just one week after reaching the front, Hall was wounded on a mission, and subsequently hospitalized for several months. When American soldiers and pilots began arriving in France en masse in early 1918, Hall transferred to the American 94th “Hat in the Ring” Aero Squadron; this transfer distinguished Hall as one of the few soldiers in the war to have fought under three different flags (British, French, and American). Hall was promoted to the rank of captain, and became the American ace Eddie Rickenbacker’s commander. In fact, Rickenbacker’s first kill was jointly shared with Hall. Shortly afterwards, Hall was shot down behind German lines, and remained a prisoner of war in various German hospitals and prison camps until the armistice. For his valor during the war, Hall was given numerous awards by both the French and American governments. However, the most desired honor for the author came when he was commissioned by the US Army to write a history of the Escadrille with fellow aviator Charles Nordhoff.

Like his future collaborator, Charles Nordhoff had a winding path that eventually brought him to the Lafayette Escadrille, though considerably later in the war than Hall. Born to American parents in London the same year as Hall, Charles Nordhoff aspired to be writer like his grandfather, and published his first piece in an ornithology journal at the age of 15. By this point, Nordhoff’s family had moved back to the United States and were living in California. In 1916, Nordhoff, like many adventurous young Americans, volunteered for the American Ambulance Corps, and served as a driver in France for the next year. On June 3rd, 1917, Nordhoff enlisted with French aviation, and joined the Escadrille the following February. Nordhoff’s time in the skies was cut short, however; not by bullets, but by bureaucracy. When the Executive Staff of the American Air Service heard of his abilities with words, he was transferred to a clerical job and assigned the droll task of rewriting military reports. Like James Norman Hall, Nordhoff spent the remainder of the war as an unwilling prisoner, trapped behind a desk when he dreamed of flight.

Though their different times at the front precluded a meeting of the two, James Norman Hall and Charles Nordhoff began working closely together on the history of the Lafayette Escadrille commissioned by the US Army. They soon discovered not only that they enjoyed each others company, but that they also complemented each other’s writing style. The book, The Lafayette Flying Corps, sold fairly well, and the two decided to continue as a duo. At Nordhoff’s suggestion, the two moved to the island of Tahiti to write about the South Pacific, an exotic land that was sure to capture the imagination of readers in the United States. After a few early failures, the team hit their stride and released a series of bestsellers in the 1930’s including the smash-hit Mutiny on the Bounty and other volumes in the Bounty trilogy. Success affected each man differently, however. While Hall basked in the success and continued to successfully write for the rest of his life, Nordhoff gave into alcohol and divorced his Tahitian wife. He stopped writing and ended up leaving his beloved Tahiti in 1936 in search of something else. He eventually passed away after fighting depression and alcoholism for several years, and was buried in Redlands, California, in 1947, a broken man yearning for his paradise of Tahiti.