Aspirations in the Time of World War I

A century ago, the West Coast had a population of fewer than 10,000 Indians of different religious beliefs, not ‘Hindoos,’ as they were called with derogation in the press. These Indians, struggling to find a footing as immigrants in America, were also imbued with a revolutionary spirit that goaded them into fighting British rule in India.

A few months before President Woodrow Wilson vetoed the Immigration Act of 1917, the editor of a small Indian newspaper in San Francisco wrote to the editor of the New York Times. In this letter, Ram Chandra, an Indian subject of the colonial British government, made a case for self determination for India.

“Congress is planning to pass a new Oriental exclusion law in which the Hindus are included. The Japanese Ambassador protested vigorously against the terms of the act...and secured important changes....There is no hope that the British ambassador will make any protest on behalf of the Hindus, because the British Government itself does not wish the Hindus to come here. ...Therefore the only course left to us is to make our appeal through the public press,” wrote Chandra (August 13, 1916). The editor of the Gadar, or revolt, Chandra’s paper was published in many languages.

Both houses of Congress overrode the president’s veto and the legislation passed in February 1917. The strong support for the law among lawmakers showed not only that Americans inherently distrusted immigrants during the World War I, but also highlighted the many years of government action on immigrants. 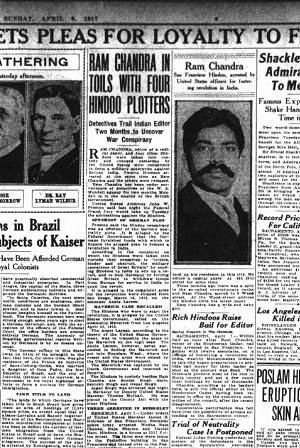 San Francisco Chronicle articles April 8, 1917With an obvious predilection for sending missives, Chandra wrote to Wilson on February 26, 1918, asking for the president’s help in freeing India from the clutches of the British. He drew parallels between the American war of independence against Britain and the Indian yearning for self rule. Despite British complaints to the U.S. about Indian nationalists disrupting peaceful rule in India, the truth lay in the brutality and immorality of the British. “More than thirty million people have died there from plague and famine...According to the testimony of British authorities themselves, millions of men and women there can get with difficulty but one coarse meal once a day.”

Clearly, some among the people of subject nations took to heart the American and British call to arms in the fight for democracy and freedom against the Central Powers of World War I. While America stood as a beacon of liberty, Britain represented the worst of colonial rule to a mind like Chandra’s. At the same time that Britain articulated the notion of freedom, it threw the people of its subject nations, sometimes without adequate training, on to the front lines of the war.

Britain held under its sway not just India but many other nations. In fact, the two great wars of the twentieth century loosened the stranglehold of imperialistic powers, such as Britain, on their colonies throughout the world. Those that did not succeed in throwing off the yoke of foreign domination in the first war, kept up the fight and succeeded in the second. Ireland became independent from Britain in 1917. Egypt declared independence in 1922, but Britain maintained control by declaring it a protectorate. In Northern Europe, Finland freed itself from Russia, which had been forced into the war at its outset, but withdrew after the October Revolution of 1917. But India, which kept up the pressure on the British for more and more power, finally won freedom in 1947, soon after the end of World War II. And Egypt finally emerged free in 1954.

Ironically, the two great wars embodied the aspirations of oppressed peoples even as they did the thirst for hegemony by the great European powers.

How did this translate into a series of court cases?

With the outbreak of World War I, despite the avowed neutrality of the United States, Germans came under suspicion. Almost from the first days of the war, Germans and Americans were at cross purposes, with the Germans single-mindedly seeking victory at all costs by subverting U.S. law and the U.S. determined to stop them. Along with shipping arms and coal and provisions from U.S. ports to destinations throughout the world, the Germans also played a role in inciting violence against the British by helping those countries, such as Ireland and India, that were fighting to gain a toehold in a totalitarian regime. The U.S. government alleged that the Germans violated neutrality laws. 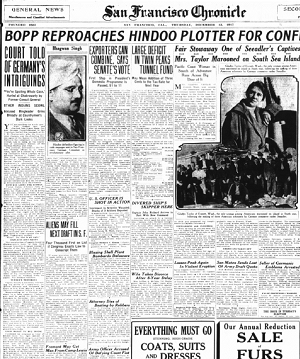 San Francisco Chronicle front page December 13, 1917It was this collaboration between the Germans and Indians that pulled the latter into the cases that the U.S. Department of Justice was pursuing in different cities throughout the country. While the DOJ tried cases elsewhere, Chandra and his cohorts were tried in San Francisco. This was so not only because the paper was published in the city but also the government charged the German Consulate in the city with being the center of the conspiracy. Chandra had found the time to pen his appeal to President Wilson even as he was going to court for trial every day.

Collectively, these cases are called the Hindoo-German Conspiracy Cases or the Neutrality Cases. At the time, they provided San Franciscans with lively reading, but over the past 100 years,they have largely faded out of the national consciousness. I stumbled across this story when I noticed a bullet hole in the judge's bench of a San Francisco courtroom. Questions about that incident led me to the amazing story.  As I researched and marveled, I wondered if this could happen today. The written word that has come down to us over the many centuries doesn’t give us reason to believe that human nature has changed over the millennia.

Over time, the view of the cases has changed, according to the Historical Reporter, a copy of which I found in the archives of the Ninth Circuit Court of Appeals. When the cases were first brought, Americans had little sympathy for the dreams of the Indians for self rule and believed what their government told them about Indian conspiracy with the Germans. In the 1950s, the Indian protests assumed the color of freedom and by the 1970s, scholars began to question if the facts of the cases could support the application of the neutrality laws.

A note on my research

Not everything I have found in the archives can be referenced: It is just there. In a binder, without a title. I searched and found. Where available, I have tried to provide a reference for every document I’ve used. I have gone through documents at the National Archives in San Bruno, Calif. Some documents that I had hoped to read, such as the opening arguments at trial of the U.S. Attorney, are not available. The only trial transcript, in any form, is archived at the British Library and is not available electronically. I did find other information at Bancroft Library at U.C. Berkeley. I examined some documents at the Ninth Circuit courthouse. I have also gone through issues of the San Francisco Chronicle and some of the San Francisco Examiner of the time.

The articles that follow are the fruits of this research, but there are many gaps in the record.  If you have information to fill any of those gaps, please send an email to vm-usa@worldwar1centennial.org.

On April 7, 1917, the morning after the United States declared war on Germany, federal agents arrested five Hindoos in San Francisco. These men had been under surveillance by detectives on the payroll of the British government. Now they were charged with conspiring with Germans to overthrow British rule in India. Three months later, they were five among the 105 Hindoos, Germans, and Americans indicted by a federal grand jury in San Francisco. Then in November the trial started in federal court, lasting five months.

The events leading up to the trial had been building up for a few years. Read More