Spreading the American Spirit through the Airwaves

Radio was one of the most exciting technical innovations of the new era. Wirelessly transmitting sound eliminated the hassle of wires especially for long distance communication. Although Guglielmo Marconi focused on transmitting Morse code signals and successfully transmitted a wireless radio signal for the first time in August 1895, his groundbreaking effort was an important precedent in broadcasting support for the war at home and the front.1

On January 12 and 13, 1910, Lee De Forest presented the first public radio broadcast of two performances from New York’s Metropolitan Opera.2 Given its ease of accessibility, 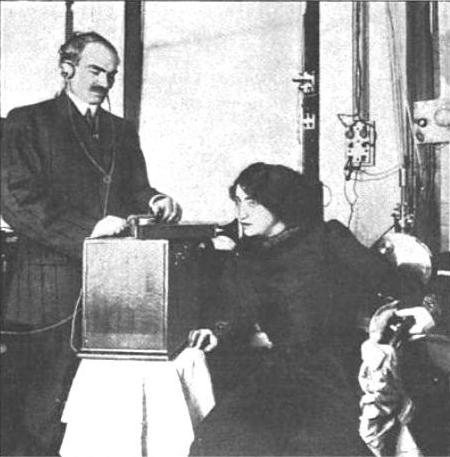 Lee De Forest broadcasting an opera transmitting patriotic songs over the radio played an important role in spreading war propaganda before America entered the war. Constant repetition of easy to sing tunes was a way to influence public opinion. Although the government suspended all commercial radio activity during the war, innovation was still in motion.3 Even before civilian radio restrictions in 1919 were lifted, numerous ideas continued to spring across the country on how to use the radio once restrictions were lifted.4

As early as December, 1918, the Illustrated World recounted how high-powered radio stations of the U.S. Navy were used to "broadcasting the truth and the light "as provided "by the most powerful educational institution in the world, the Committee on Public Information."5 Using wireless technology, George Creel and his Committee (CPI) did not miss the opportunity to make his message heard. In April 1918, The Wireless Age 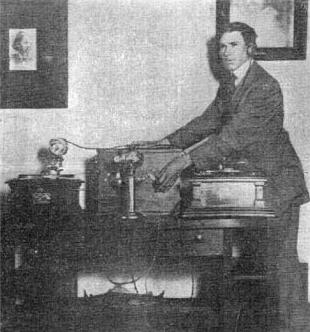 Wireless broadcast for soldiers in hospitalsreported a review on a short-range electrostatic induction system as a way to transmit music and news to hospitalized soldiers.6 The Springfield Republican, in its January 10, 1919 issue, reports that Ensign Sanford Lawton wrote to his parents that he and his submarine crew in the Azores celebrated Christmas at sea with all the festivities including “all of the latest music from the states was played over the wireless." One of the other submarines broadcasted the songs from their phonographs on board.7 Only months later, on May 7, 1919, the Dallas Morning News reported that the U.S.S. George Washington used its radio transmitter to provide soldiers the “swinging strains reproduced by wireless” as part of the “nightly talking machine concerts.”8