The advent of recording paralleled the development of radio. Though Thomas Edison considered his invention as a dictation machine in 1888, businesses saw the 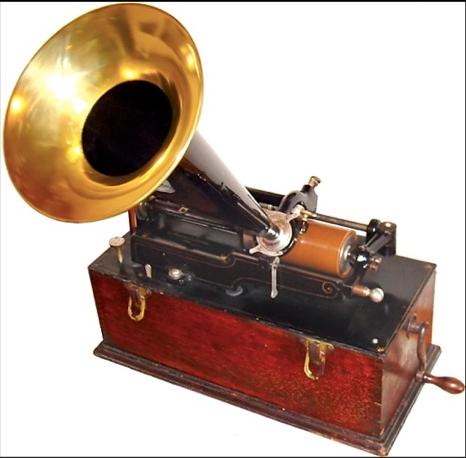 Cylinder phonograph commercial possibilities of the cylinder phonograph as an entertainment device. Columbia marketed the product and from 1890 onward, it was considered easy to purchase records. This ease of accessibility would be facilitated when the gramophone, which played 78-rpm flat-discs, replaced the cylinder phonograph. These discs were easier to mass-produce. During the war, the “big three” firms producing recordings in the United States were Edison, Victor, and Columbia. The United Kingdom also had their own firms: Decca and Gramophone.9 At the home front, music lovers equipped their parlors with a piano, a library of sheet music and a mechanical playback device such as a gramophone. Song production at Tin Pan Alley was booming at this time. It is not surprising that the war years were the heyday of sound production entrepreneurs. Craig Roell provides interesting figures:

By 1914 more than 500,000 phonographs were being produced each year, with a value of $27 million. But in 1914, a record 323,00 pianos were also produced, value at $56 million. Piano manufacturers, who were selling unprecedented numbers of pianos, were hardly worried by the possible threat of competition.10 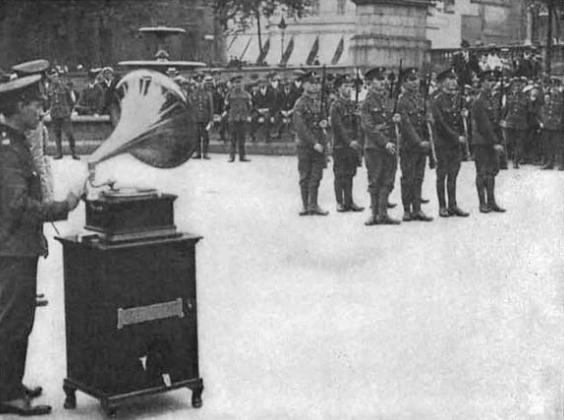 A Gramophone commands troopsBy 1915, the phonograph was used in the British military to instill patriotism in volunteers and as a recruiting device. A surviving picture shows a gramophone being used to command soldiers at a display drill. Similarly, due to the shortage of instructors, a photo taken from late 1917 at the U.S. Naval Training Station at the Dunwoody Industrial Institute in Minneapolis shows a phonograph teaching recruits basics of wireless telephony.11 By 1915, British soldiers were also bringing portable gramophones to the front for entertainment and solace in the trenches. An advertisement from Decca attests that it was “light, compact, and portable” with the header reading “A Gift from Home!” Similarly, the Edison 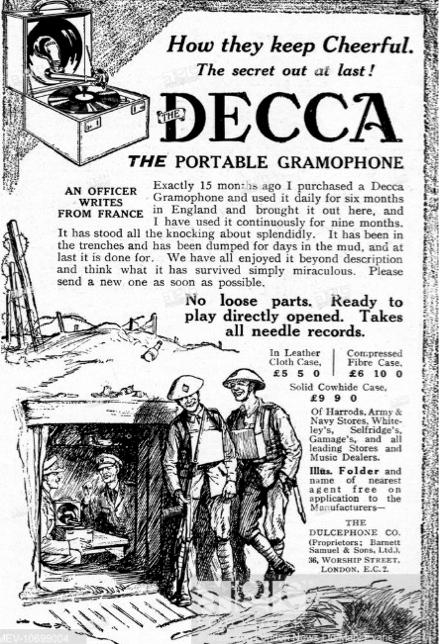 Company invented the Army and Navy Model in 1917 after receiving a request from the United States Army Depot Quartermaster in New York to create portable machines for the soldiers. Selling at $60 a unit, the new model was being purchased by soldiers to take them overseas to the trenches along with recordings of music or loved ones. The war model was discontinued after the war.12

An issue of the Independent-Harper’s Weekly from October 28, 1918 describes the gramophone as a cherished companion of soldiers and sailors, playing a few records from home repeatedly to alleviate boredom and terror. Indeed, demand for records was

Commenting on Siegfried Sassoon’s poem Dead Musicians III, Watkins writes: … “the phonograph was capable of momentarily recapturing or, more properly, of forever “freezing” the memories of former buddies. But when the recording came to its conclusion, breaking off with the swooshing sound of a needle 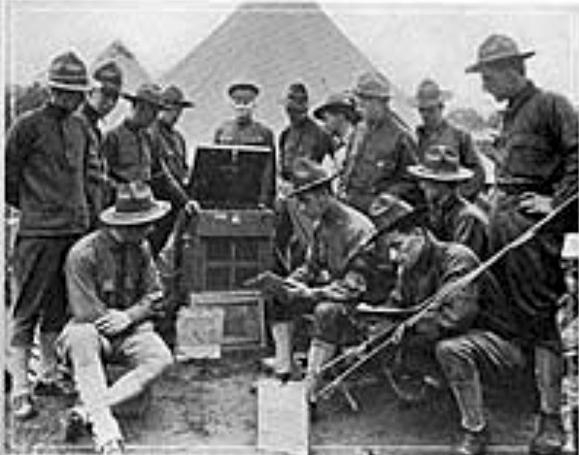 Soldiers gather around a phonograph tracking an empty groove, reality set in: a time gone by was lost forever, and so were friends. Nostalgia, and even ragtime, could go only so far.”13

Many of the phonographs that were recorded during the war are already digitized and can be accessed online. As of 2019, here are some links:

A 12-CD set entitled World War One Songs Early Recordings from 1918 Victrola is also available. The recordings were produced by “…a 1918 hand cranked Victrola using special equipment to enhance and retain the characteristic Victrola sound.”14