In this section we look at the animals themselves: how they were selected, what size and conformation were most needed, and which jobs required special attributes.

Horses served primarily in two missions during the war: in harness, pulling guns, supply wagons, and other vehicles; and as saddle horses, for daily use by officers or, on very rare occasions, as the mounts for cavalry soldiers. Learn more about these roles in Under Saddle and In Harness. 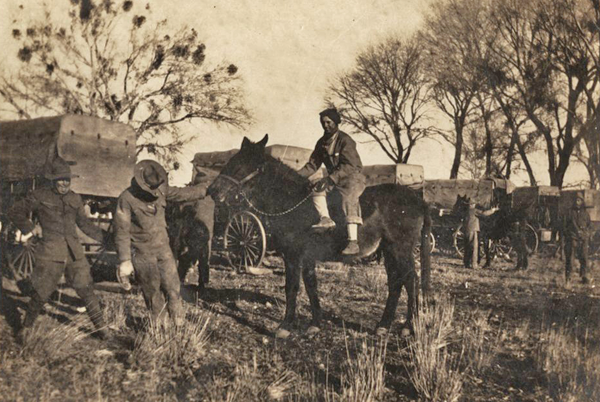 U. S. soldiers relax behind the lines. This would be considered a light draft horse.Qualities that were desirable in military riding horses included smooth gaits, especially at the trot, and the ability to “keep flesh,” that is, a horse that required less than average amounts of feed - what is often known as “a good keeper.”

Horses that tended to put on weight in regular conditions would be very desirable in the battlefield where rations might be short.

Draft horses were further subdivided into the light draft and the heavy draft types.

These were not simply divisions based on size, weight, and pulling power. The light draft horse was also a riding horse, because the guns and in many cases supply wagons were not actually driven by a driver seated on the wagon or gun. Instead, one of the horses in each pair was ridden, and the team was guided by these riders – and at least part of the gun crew had a way to get to the battlefield besides having to walk. 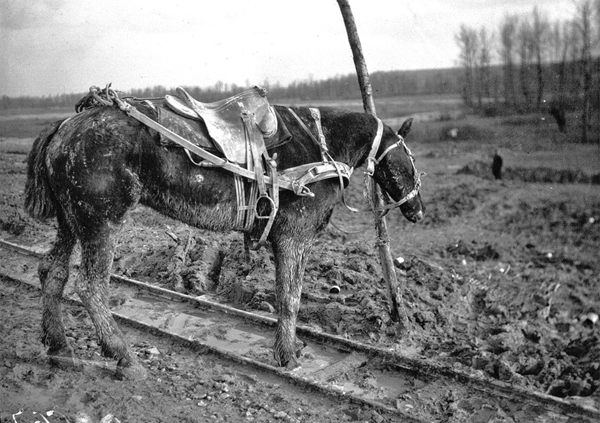 A French light draft horse tied to a pole next to a road. The other horse in the team was killed, and this horse is waiting to be picked up by following troops. Often it was the animals on the “near” or left side that were ridden, but photos also show the right or “off” side of the team being ridden as well.

So the light draft would ideally have reasonably comfortable gaits as well as moderate pulling power, while the heavy draft horse was not ridden and was expected to excel at pulling heavy loads.

Among the American horses in World War 1, most numerous were the light draft horses (or draught, to use the British spelling, but pronounced the same as the American English word “draft”).

These animals were between 15.2 and 15.3 hands tall1 (a hand being 4 inches, or about the width of a person's hand), weighing about 1200 lbs., and in their breeding they were likely to have Shire, Clydesdale, Belgian, Normandy, or Percheron blood.2 They were, in body build, somewhere between a saddle horse and a draft horse, and their primary job in the Army was to pull supply wagons and the smaller guns.

Draft horses, in general, are broader in the shoulders than saddle horses, because they actually pull largely with their front legs, leaning their shoulders into the collar or harness, rather than pushing off with their hind legs, as is the case with a ridden horse.

Draft horses may or may not have heavy hindquarters, but ideally have relatively straight shoulders and pasterns3 (that is, nearer to vertical, without as much horizontal angle as some other horses might have). Both the straighter (more upright) shoulder and the more upright pastern would be undesirable in a riding horse, as the gaits of such horses tend to be rougher to ride. But those same characteristics made pulling more efficient and allowed the collar to fit better, without interfering with the horse's breathing. Draft horses have shorter legs, shorter and heavier necks, and broader chests than saddle horses.

The light draft horse would look like a blend between the lighter saddle horse and the heavier draft animal. They would be thick through body and neck, short backed, short legged, and would appear muscular for their size. Certainly the ideal artillery horse, which pulled the guns while being ridden by the gun personnel, would not have extraordinarily straight shoulders and pasterns, because the gunner riding them would be tired from the rough gaits before having to fight. 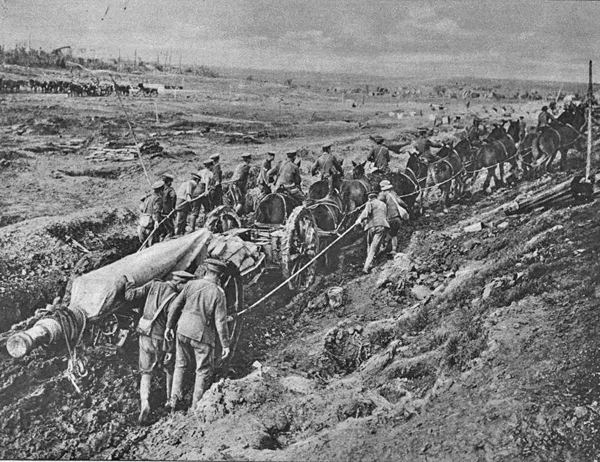 At the time of World War 1, artillery draft teams were still placed according to size, with the larger horses harnessed closest to the gun and the lighter horses ahead of them. This arrangement of wheelers, swing, and lead horses was eventually replaced with the approach that the best teams were those where all horses were approximately the same size. The traces would therefore lead in a straight line from the rearmost horses to the front ones, and pulling would be most efficient.

The wheelers, whether larger or not, are always working, whether pulling or (in the case of going downhill) resisting the movement of the vehicle, while the lead horses are not so burdened. Thus, if the horses were similar in size, they could be rotated through each of the positions, thus equalizing the work they were asked to do.4

The U.S. Great Plains states were the primary source of light draft horses for both the U.S. and British armies, and most probably for the French as well. (Detailed French records are not available showing types purchased, but the French bought nearly as many horses in the U.S. as the British did – about half a million). The Percheron Society of America cooperated with Captain Sidney Galtrey in his book, The Horse and The War, published in Britain in 1918, extolling the virtues of the breed (though much other information was also contained in the volume.)5 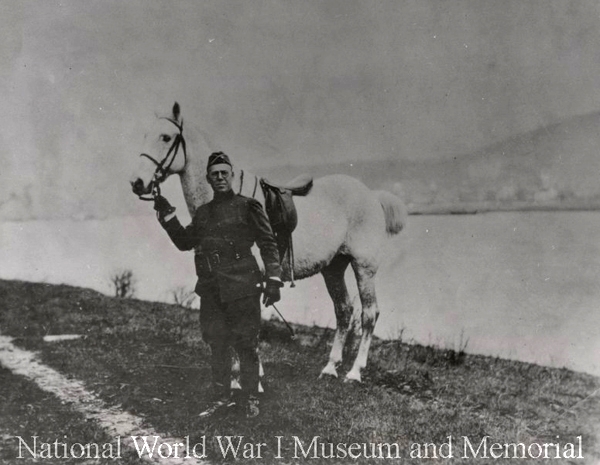 A Signal Corps officer with his horse Bab in Germany, December 1918. Based on color and conformation, this horse is likely a Percheron cross.

With sales topping a million animals by the time the U.S. entered the war, foreign purchases provided a large infusion of cash to mid-western farmers. Galtrey’s description of the American light draught horse as having “hardiness, placidity of temper, strength and power, virility of constitution, with what is called “good heart,” versatility and extraordinary activity for his size and weight”6 were what appealed to army purchasers about this American animal.

Heavy draft horses were similar to their lighter cousins but were at least 1400 to 1500 lbs. Their bloodlines included many of the same draft horse breeds as did the light draft horses, with Shire and Percheron blood predominating.7 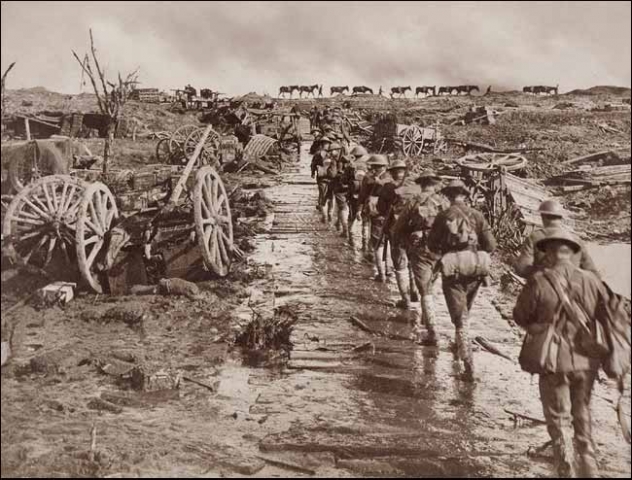 Pack horses carried ammunition and supplies to the battlefield, and sometimes wounded men back to the rear lines. There were only a few thousand pack horses, and there never seemed to be nearly enough, though this could be said of all the types of horses and mules that were used by the AEF.

At the end of the war, the numbers of animals actually assigned to the AEF was only about half of what should have been assigned based on official supply tables. But the shortages of pack animals seem to be more critical, and point to a failure to anticipate the tasks these animals would have to perform in the particular conditions in France at the time. Trench warfare, with its near-constant circle of supply going forward to a nearby fixed line, may have forced some of the supply work that would ordinarily have been done by wagon to be broken into smaller loads and onto the backs of pack animals.