“The Family in the Arena” 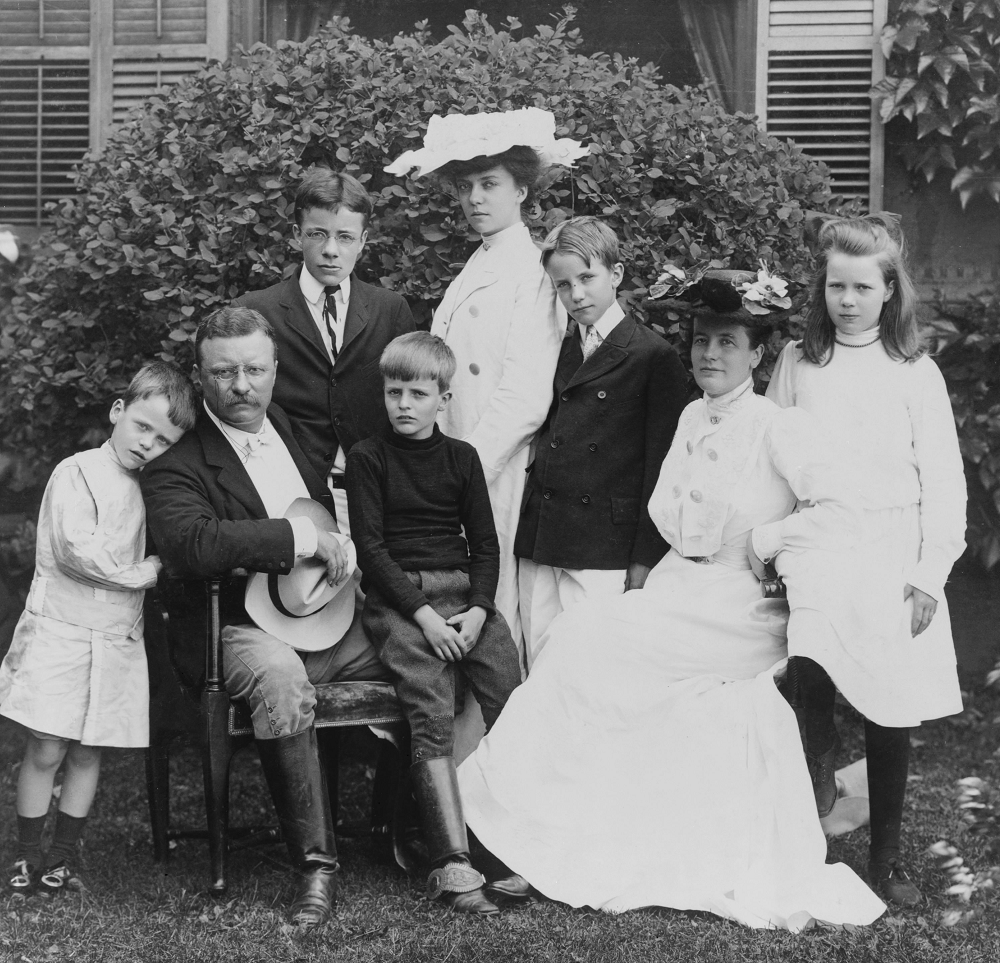 “Only those are fit to live who do not fear to die and none are fit to die who have shrunk from the joy of life and the duty of life.”

This was just some of the advice that Teddy Roosevelt gave to his children, five of whom served bravely in World War One. On October 27, 2015, President Roosevelt’s 157th birthday, we honor the service of a family that gave so much to the nation.

No stranger to battle, Teddy Roosevelt repeatedly pleaded for American entrance into World War One, despite the government's official stance of neutrality. Roosevelt, already a decorated veteran of the Spanish-American War, was willing to put his money where his mouth was: he wanted to personally raise two divisions of soldiers, and command them in battle, with his four sons as privates. While President Wilson denied this request of the elder Roosevelt, all four sons saw combat in Europe during the Great War, and his daughter Ethel served as a nurse in France.

Quentin Roosevelt, the youngest of the Roosevelt children, had an aptitude for mechanics that he believed could be put to service for the nation. Immediately after the US declaration of war, Quentin dropped out of Harvard to join the newly formed Aero Squadron. Quentin did not let the famously poor Roosevelt eyesight disqualify him from service- like the future President Harry Truman, he memorized the Army eye chart. Quentin successfully shot down one German plane, but his poor eyesight may have hindered his abilities as a pilot. On July 14th, 1918, during the Second Battle of the Marne, Quentin was shot down and killed behind enemy lines. The German government attempted to use his death for propaganda, which quickly backfired. The comparison of the courageous son of the former American president with the six sons of the Kaiser who kept their distance from the war was odious to the German public, and further glorified the sacrifice of Quentin and of his brothers.

Theodore Roosevelt Jr. was the eldest son of Teddy Roosevelt, and had a long and storied career in both the US government and military. One of the first US soldiers to volunteer to go to France, Ted rose to the rank of Lieutenant Colonel, valiantly leading his men into combat in several major battles, and was gassed and wounded by shrapnel. When the US entered WWII, Ted entered the army as a brigadier general. At the age of 57, General Roosevelt led his soldiers into combat during the invasion of Normandy, the only general to land by sea with the first wave of troops, which included his youngest son. For these actions, General Roosevelt was awarded the Medal of Honor; however, he would not live to see it. A month after the invasion, General Roosevelt died of a heart attack, and was eventually buried alongside his brother Quentin in France.

Archibald Roosevelt, like his brothers and sister, was eager for the US to enter WWI, and for several years before, attended civilian training and preparedness camps. When it was time to go to France, Archie was ready, serving as an infantry captain in the First Division, the Big Red One. Archie’s service, however, was cut short when he was hit in the knee by enemy bullets while saving three of his men who had come under fire. His wounds were so severe that he was discharged with 100% disability and given the Croix de Guerre and Silver Star. However, like his surviving brothers, Archie again answered the call of service and rejoined the army in WWII. While fighting in Papua New Guinea, Roosevelt was again wounded in the same knee, leading yet again to his discharge from the army. To this day, Archie Roosevelt is the only person to ever be discharged with 100% disability for the same wound in two different wars.

Kermit Roosevelt, who had accompanied his father on several expeditions through the African and South American wilderness, had an equally diverse experience in the World Wars.

During WWI, Kermit joined the British Army to fight in the machine gun corps in what is now modern-day Iraq. Within a few months of arriving in the Middle East, Kermit had mastered Arabic, and acted as a translator for his British comrades. In 1918, he joined the American Expeditionary Force, and commanded an artillery battery in the devastating Meuse-Argonne offensive. When WWII broke out, Kermit again joined the British Army, conducting raids into Norway and fighting in North Africa, before being discharged for health reasons in 1941. At this point, Kermit fell into a deep depression, compounded by alcoholism. His family believed that military service would help with his troubles, and asked their cousin, Franklin Roosevelt, to commission him in the US Army. The Army transferred Kermit to Alaska, where he worked in intelligence and helped to establish Eskimo militia units. Unfortunately, Kermit lost his battle with depression, and committed suicide on June 4th, 1943. He was buried in at Fort Richardson Military Cemetery near Anchorage.

Had it not been for regulations banning women in combat, there’s little doubt that Ethel Roosevelt, Teddy’s pugnacious daughter, would have commanded troops in Europe. As Teddy once said, “she had a way of doing everything and managing everybody.” Despite this, Ethel still found a way to bravely serve her country. Though her brothers were often credited with being some of the first Americans to enlist in 1917, Ethel and her new husband, Dr. Richard Derby, went over to France in 1914 to serve in the American Ambulance Hospital, he as a surgeon and she as a nurse. This began her lifelong association with the Red Cross. During WWII, Ethel served as the chairwoman for the organization in Nassau county, and when she had to sit for a portrait, she eschewed the gowns and jewels of the society she was born into, instead favoring her Red Cross uniform.

Michael Williams is a 2015 Intern at the World War One Centennial Commission.