While the first thing that might come to mind when considering the role of horses in the Great War might be the cavalry, that would in fact be the least frequent use of horses in the war. Far more horses and mules served in harness than under saddle (discounting for a moment that many of the draft horses were ridden while in harness, as in many cases the “drivers” did not ride on the vehicles but rather on the horses that were pulling vehicles and guns). But putting this aside, and focusing on horses that were ridden rather than being driven, it would be the Officer’s Chargers that made up the largest numbers of saddle horses used in the war.

In both the British and U.S. armies, officers were issued horses to ride as their daily mode of transportation. These “Officer’s Chargers” were the finest boned and lightest in appearance of all military horses. They were also the tallest, at 16 hands and sometimes more. 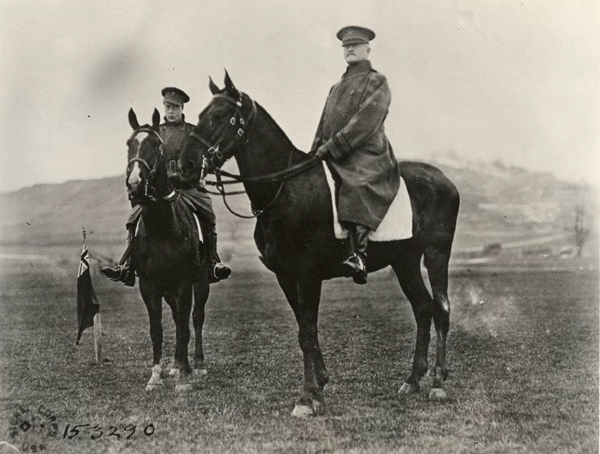 General John J. Pershing, U.S. Army and Edward, Prince of Wales reviewing troops. This photo is extraordinary in the contrast between these two men, one a young royal and a junior officer, the other the commander of the American Expeditionary Force. Both were keen horsemen, but Pershing with his enormous horse and erect military bearing forms a decided contrast to the Prince of Wales mounted on what appears to be a pony, slumping in his saddle. 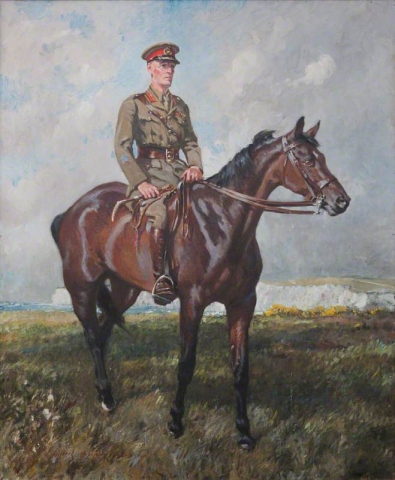 General “Galloping Jack” Seely with Warrior, oil on canvas by Gilbert Joseph Holiday and hanging at Seely’s home Mottistone Manor.In a few cases, their stories became national legends, such as General Jack Seely and his horse Warrior, who became folk icons in Great Britain and Canada and whose actions and narrow escapes were followed by thousands of fans back home.

Even junior officers and senior enlisted men rode horses, but theirs were not as grand; known in the British army as “Officer’s cobs,” they might be large ponies or small horses, 14.2 to 15.1 hands tall. The term “cob” is used more in Britain than in the US, but the smaller, sturdy, plainer looking animal is easy to recognize in many of the American west’s cowponies and mustang stock. 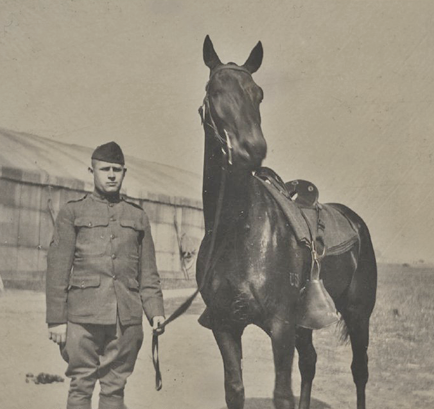 In 1915, well before the U.S. entered the war, the U.S. Cavalry Journal quoted Brigadier General E.A. Garlington, Inspector General of the U.S. Army, on the best and most desirable type of horse for the cavalry.

The best type of cavalry mount is a half-bred horse for the trooper, and a three-quarter or seven-eighths bred one for the officer, and the horse must have breeding and stamina enough to go through any kind of country. It should not be much over 15.2, as a big horse cannot stand the strain which the small, compact horse is capable of standing."2

"Half-bred" refers to the percentage of Thoroughbred blood, which the General clearly thought preferable to other bloodlines. But later, after the U.S. had entered the war, another opinion was forthcoming, this time from a member of the Quartermaster Corps. Major Clyde Hawkins put forth a comprehensive method for selecting and handling horses for government service. 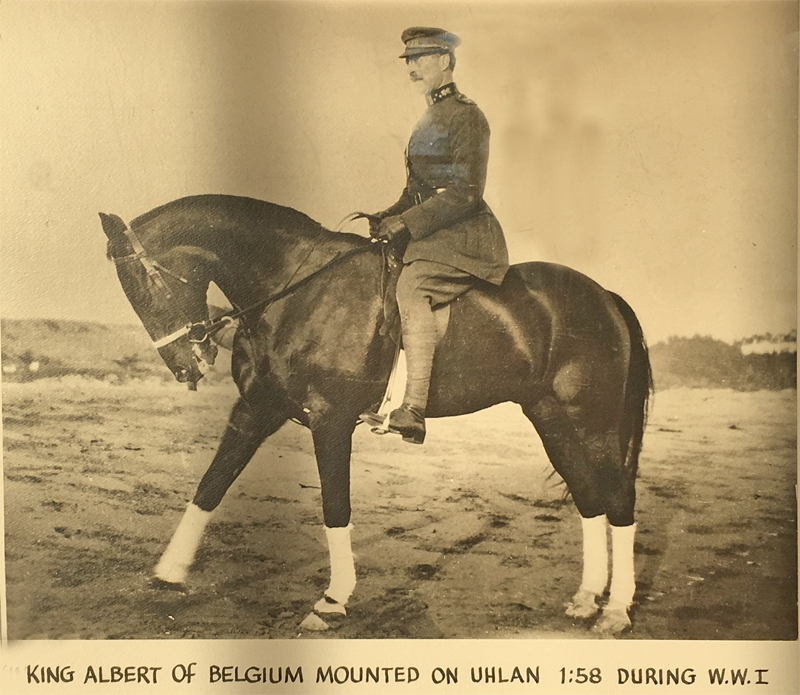 King Albert of Belgium mounted on the Standardbred stallion Uhlan. The horse had been exported from the U.S. to stand at stud in Russia prior to the war, and had been sent to Belgium on his way back to the U.S. when the war broke out. He was one of the finest sires of his time. Photo courtesy of Stable of Memories, Red Mile, Lexington, KY.In order to obtain the proper type and conformation of cavalry horse for use of the government it is impossible to expect to obtain horses of one breed. In short, we must take what the country affords. In general, this horse is in part or in full a standard bred trotting horse. A great many horses are obtained for cavalry purposes with thoroughbred blood in their veins. It has been my experience that the best horse we obtain in this country for cavalry purposes is a cross between the thoroughbred sire and the standard bred mare." He goes on to note that very few thoroughbreds are available for the price the government is willing to pay, and though the large, big-boned thoroughbred is a grand horse, as a rule they are too hot-headed for the average trooper, but make excellent mounts for officers.3

The term “hunter” also merits explanation. Foxhunting was still a sport that was well known in both the U.S. and Britain during World War 1, but many “hunters” had never seen a fox. The hunter is a type of horse, not a breed. It is distinctly a riding horse, with sloping shoulders and pasterns, both of which result in smooth gaits. The head and neck should be set on at medium height relative to the body, neither high (making for large under-neck muscles and a tendency to pull on the bit) or too low (making the animal balance very much toward the front, or “fall on the forehand.”) The neck should not be short and it should arch upward, indicating some strength, rather than downward (ewe neck), generally a sign of weakness.

Many other conformation points were emphasized in the manuals for purchasing agents, most of them having to do with avoiding any body build that would pre-dispose the animal to lameness in the future. The hindquarters should be well muscled, as this is where the impulsion and forward motion of the riding horse come from. The back should be well muscled, both in order to provide a place for the saddle to rest and to support the core and allow agility. The withers (prominent ridge of the spine at the very base of the neck) should be well defined but not excessively high, as a horse with next to no withers and a horse with very high narrow withers will both be nearly impossible to fit with a saddle. 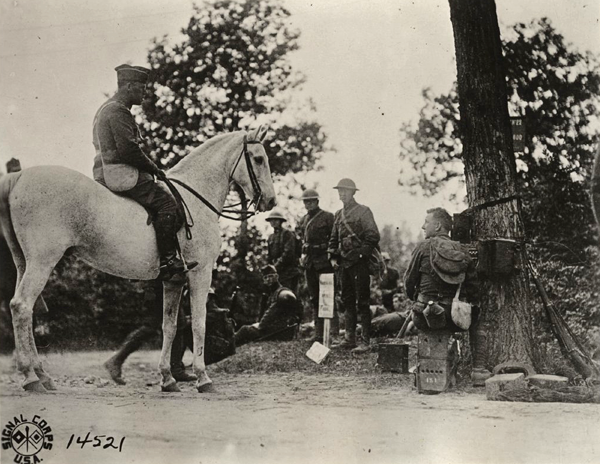 U.S. officer inspecting a field telephone switchboard, 1918. His flashy gray horse would have been considered completely unsuitable for the battlefield, not only because it would be highly visible to the enemy but also because it would be impossible to keep clean. But after the armistice, this horse was the equivalent of a sports car. In temperament, hunters (and ideal military horses) would be biddable, that is tractable and amenable to accepting the commands of the rider. They would have courage, sometimes known as heart – necessary in the hunt field to face rugged terrain and tricky fences, necessary in the battlefield to face frightening sights, sounds, and smells.

Officer’s horses were drawn from the Quartermaster (supply officer) just as were other supplies such as wagons, ammunition, clothing, and food. Many were routine mounts, but some officers wanted flashy horses as a matter of pride and prestige. Photos of officers with their mounts showing well-turned out animals and men in clean and nicely pressed uniforms were nearly all taken after the armistice or stateside prior to deployment. Interestingly, there are not many photos of officers on the battlefield, perhaps only because there were far more enlisted soldiers and draft horses than riding horses and officers.