"The Mule is Dead; Long Live the Auto Truck”
blared the front page headline of the “New York Tribune Magazine”
on Sunday, June 25, 1916.
“Gasoline Spells Extinction Not only for the Army Mule but, Perhaps, for the Cavalry Branch of the Service – Mexican Desert or Mountain Pass, the Auto Truck Goes Anywhere a Mule or a Horse Can Go, and Gets There in Half the Time.” 1 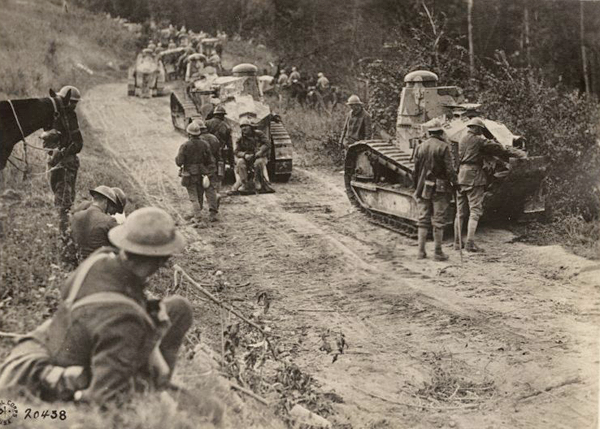 Despite the blithe assumptions about gasoline power in 1915 and 1916, by the time the U.S. entered the war in 1917, it was clear that gasoline powered vehicles were not up to the test in the battle environment.

The majority of horses and mules in the war wore a harness and pulled – guns, wagons, ambulances, field kitchens, water tanks – anything that needed to be moved, was moved by horse/mule power. 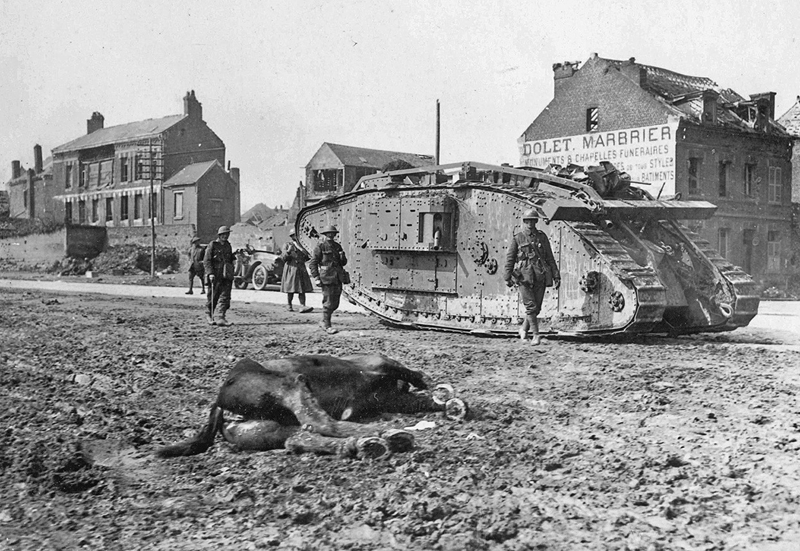 By the end of the war there were indeed some very large tanks, a harbinger of things to come. But for most of the war, trucks, tanks, and their future were imagined by only a very few. Here, a British Mark V tank in 1918. 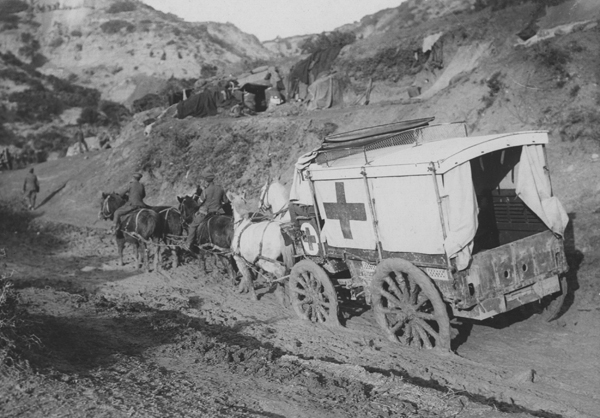 A British ambulance in the mud at Helles. 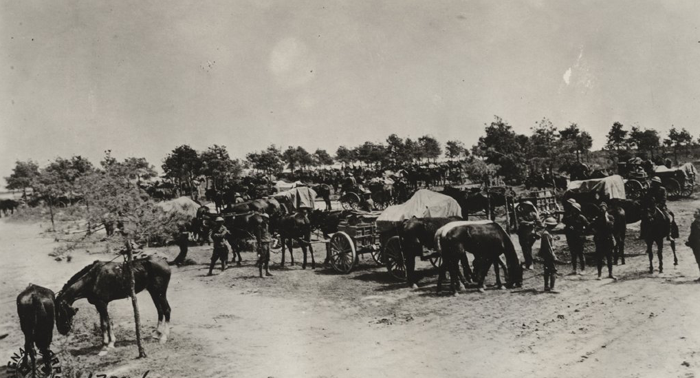 Pulling Wagons, Water Tanks, Field Kitchens, and Everything Else

The horses that worked behind the main lines were usually assigned to the Quartermasters Corps, that is the group in charge of all supplies and deliveries. Their work was still dangerous, and equally as heavy as that done by the gun horses. 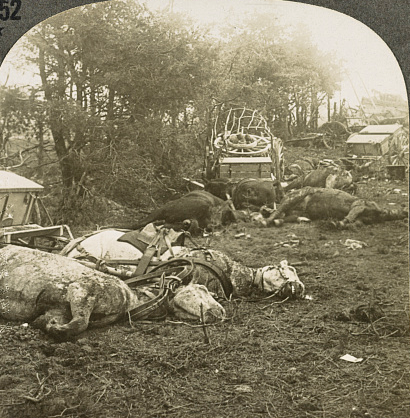 These horses paid the ultimate price: a U.S. supply train after an aerial bombing attack. 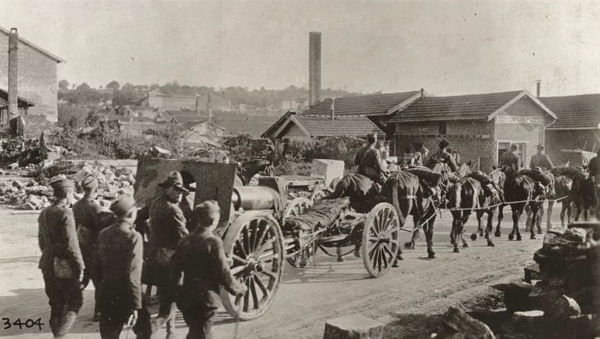 U.S. cannon en route to the front, Revigny, France, May 15, 1918.Artillery horses were usually harnessed six to a gun. The guns were single-barrel, single shot weapons that fired shells of various sizes, from six pounds to nearly 2000 pounds, though there were few of the very large guns.

While a gun was being moved, most of the work would be done at a trot if the terrain permitted, though in active battle conditions if a gun needed to be moved quickly, the horses would be asked to canter or gallop. Depending on the size of the gun, most of these horses were of the light draft category, often draft crosses, and the most common American farm horse of the day. These were versatile animals that could, if necessary, pull quite effectively at a gallop if the distance was not too long. 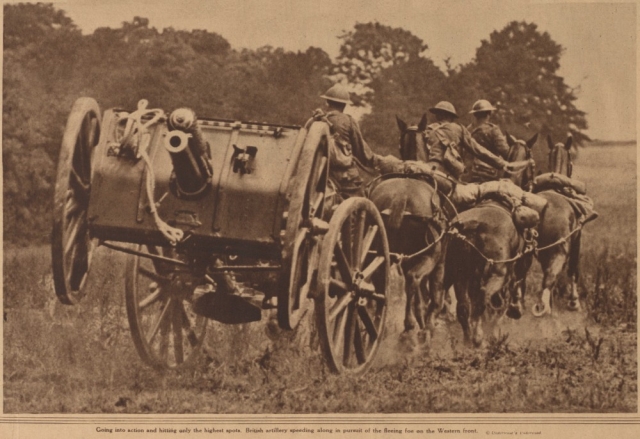 A 13-pounder bounces across a field with the team at a gallop, October 1918.Each gun had two wheels permanently attached to it, with a tongue that protruded from the rear and that could be attached to a limber, that is, a platform over two wheels. With the limber attached, this made a four-wheeled vehicle for transporting the gun, which was pulled backward with the limber in the front and the gun in back. 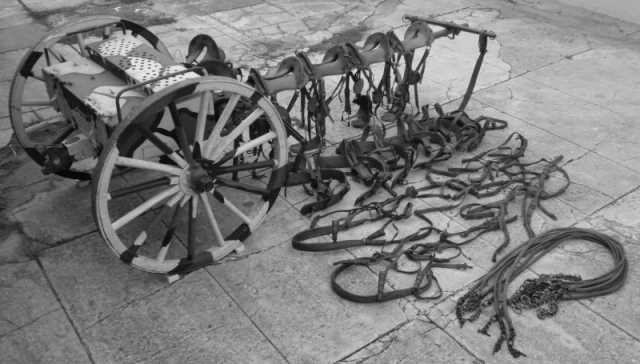 A restored U.S. limber with saddles and harness for a four-horse hitch. 3

The limber usually also included an ammunition chest, some water buckets, and other supplies.

When the gun was in use it was removed from the limber, which remained nearby so that the ammunition could be accessed.

Artillerymen could sit on the box on the limber when it was being pulled, but they did not drive the horses from there.

Rather, one horse in each pair was ridden, so with a six horse team, there would be three riders who controlled the horses’ speed and direction.

A similar arrangement involved a limber and a caisson, another two-wheeled vehicle that carried extra ammunition, and was also pulled by six horses. The caissons remained at the rear of the battle line and re-supply ammunition was carried to the front, often by pack horses. Click for more about animal-drawn vehicles. 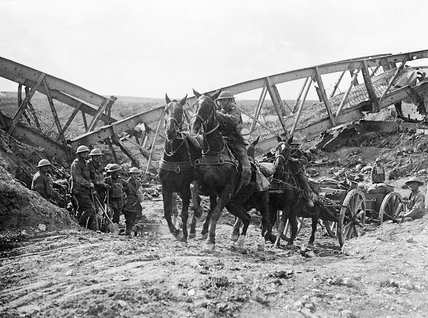 A British gun team.Larger guns required more and larger horses. The 5-ton Whitworth gun required a team of 12 horses. Heavy draft horses are not effective movers at more than a trot, and actually many pull most of their loads at a walk. Their conformation, that is, body build, is not suited to the faster gaits and they tire quickly, even though they may have very good stamina at a walk pulling a heavy load.

Even ten years after the war ended, the use of horses was still assumed to be necessary for off-road operations. A Quarter Master Corps officer wrote,

“Machine guns are not placed near the broad highways as a rule, but rather are concealed in the rocky ravines, in farmyards and woods. It is only the horse or mule that can guarantee to take the guns quietly and surely into such positions, many of which are difficult even for men to reach without the use of their hands.”

The same writer goes on:

“Divisional artillery, too, must be able to emplace off the roads. It must be able to get through mud and water with the same degree of certainty as the infantryman whom it supports. It frequently goes in position far forward in the combat zone at night when the noise of tractors would betray its presence. It must be able, when occasion demands, to march economically at the slow rate of the infantry, 2 ½ miles per hour. Motors cannot meet these specifications, and the demand is for horses.”2

In the first two years of the war, 1914 – 1916, the U.S. had a policy of strict neutrality and thus, American newsmen covering the war could interview German army personnel and report the news as easily as they could from a British or French source. The Cavalry Journal reported such a conversation in its January 1916 issue:

“A German officer expressed himself to an American reporter as follows:

“The horse is absolutely necessary at the front to haul heavy ordnance into position. Our tractors are excellent, but we keep now always horses in reserve. While I have seen horses trembling from the smell of blood or the sight of other horses disemboweled and writhing in agony on the ground, those in harness keep enough will power and courage to perform the heaviest work with the utmost assistance to the men. I am not a horseman, but I have learned to respect the horse for his behavior in this war, and they are treated by us as comrades.” 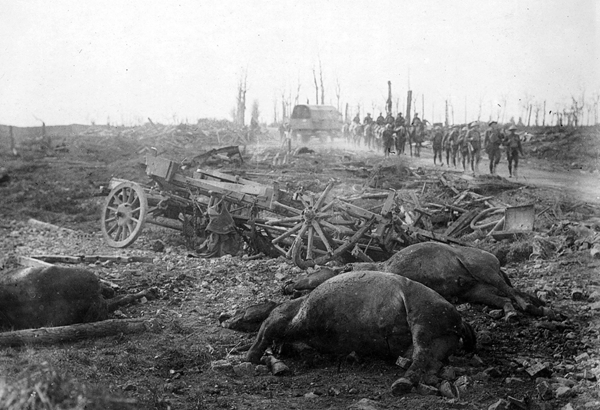 Riders and horses approach dead horses next to a road near Ypres.

The German horses to which he refers must have been well trained and well treated, for there is no other explanation for their obedience in the face of such fearful sights. The Germans had a long tradition of classical training and horsemanship, and its value was borne out in what the non-horseman officer observed. There were, of course, stories of mistreatment of horses by German troops as well, but in this case, the behavior of the horses reflected well on their training and handing.

Gun horses were present on the battlefield at all times - they did not retreat to the rear lines at night. They were cared for by the artillerymen themselves, and horse care came before getting a meal or rest for the men. All the fighting corps had cooks assigned to them, and the field kitchens were hauled by horses assigned to that division. Water tanks, for supplying men and animals, also belonged to each division.

In his monumental study of the daily lives of soldiers in the Great War, Richard S. Faulkner has this to say about artillerymen: 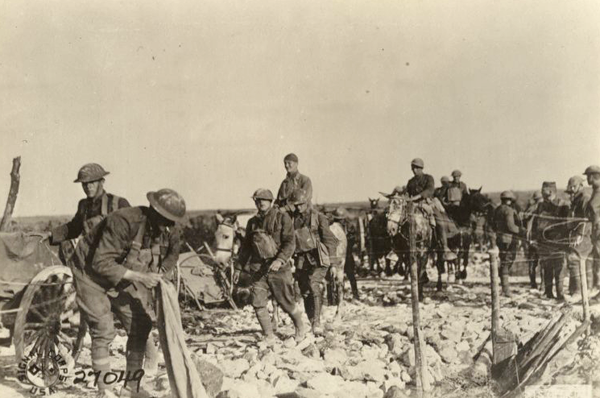 A U.S. machine gun company on the way to the front, 1918.“Much of the artilleryman’s unremitting toil was dedicated to the care and feeding of his unit’s draft animals. When it came to horses and mules, the problem for the artillerymen was one of scale. At full strength, an infantry regiment contained sixty-five horses and 325 mules while a field artillery regiment had 1,163 horses and 162 mules. For the infantry, this equaled one draft animal for roughly every ten soldiers in the regiment, while a light field artillery regiment (with 75mm guns) had one horse or mule for every 1.2 men.

"Furthermore, the infantrymen could still perform their missions if their units grew short of draft animals, but this was not the case for the artillery. Having this many animals meant that the care and feeding of horses and mules occupied much of the artillerymen’s lives in and out of battle. For the most part, the infantryman looked after himself, his personal equipment, and his small arms. 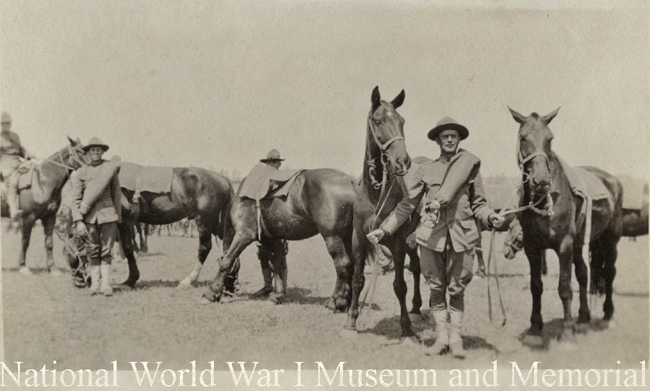 "The artillerymen were stuck in a steady cycle of hauling forage and water, grooming the animals, mucking out the horse line, maintain the tack, saddles, guns, and caissons, and then taking care of himself, his personal equipment, and small arms. By regulation, the needs to the draft animals came before those of the soldiers. After artillery units were pulled from the line for rest and refit, the care of their animals still remained a top priority for the troops.5 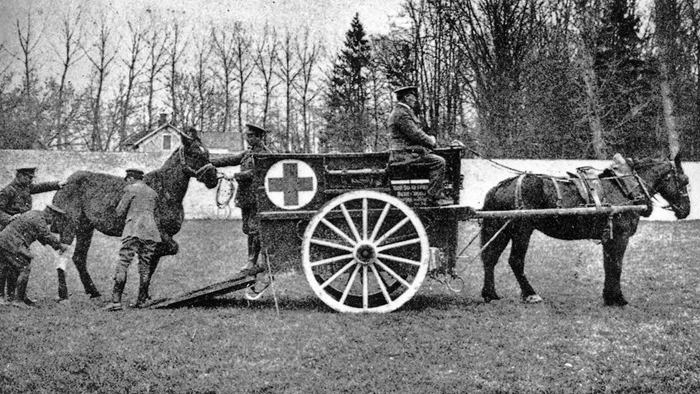 A horse-drawn horse field ambulance with an injured horse being loaded. Note how one foreleg is being held in the air while the hind leg is being bandaged, a precaution against the horse kicking the man who is working on the injured rear leg.Field ambulances for both men and horses were pulled by horses. Through the ancient code of battlefield honor, vehicles bearing a red cross were not attacked, though the men or animals being carried inside the ambulances might have been under fire only minutes before. 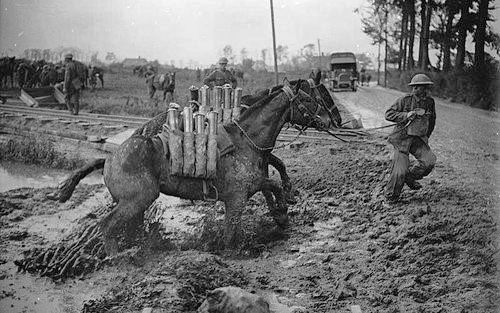 U.S. pack horses carrying shells.Pack animals might be either horses or mules, but were smaller than other animals because it was easier to load a smaller animal than to hoist a pack onto a tall back.

Their work often involved moving supplies from a dump point at the rear of the front lines, to a point forward, sometimes right to the edge of the trenches. They might move anything from ammunition to hot soup to wounded men. 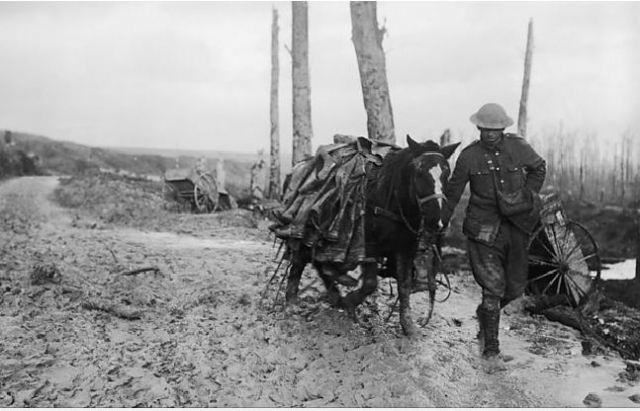 A British horse is led through mud while carrying the bodies of dead soldiers. 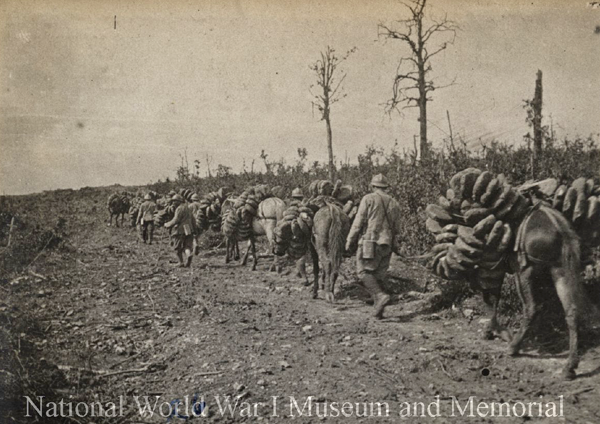 There was a severe shortage of all horses and mules, but the shortage was most acute in the pack animal category. Whether this was because trench warfare relied more heavily on packing than what was planned for, or whether the numbers planned for would never have been adequate in any battle scenario, is not clear.

But the pack animals had a particularly difficult job because they often moved cross country through the worst mud, picking their way one at a time rather than in a larger company.

When looking at photos of horses and mules at work, the sheer numbers of animals becomes apparent. All of them had difficult lives at least part of their time in France, with insufficient food, no shelter, inexperienced caretakers, and heavy workloads.

No animal lover can mourn the passing of the era of the war horse.