USAHEC is treasure trove for World War I research 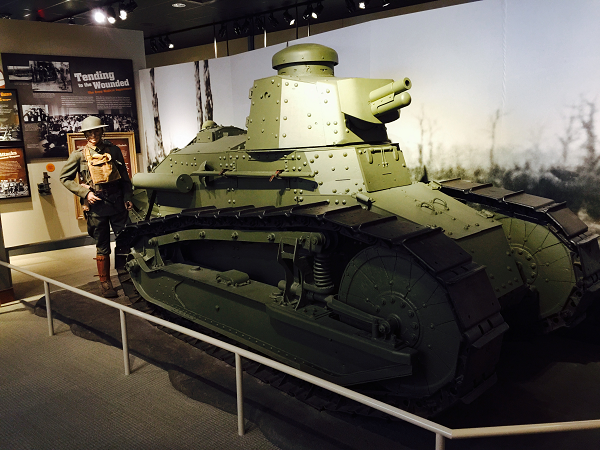 Tucked away in Carlisle, Pennsylvania, the U.S. Army Heritage and Education Center (USAHEC) is dedicated to educating and preserving the legacy of those who have served their nation in the Army. The USAHEC’s library and archive houses millions of books, personal correspondences, papers, and photographs. Through museum exhibits and the Army Heritage Trail, the USAHEC strives to tell the story of the members of the U.S. Army and its veterans.

In the Visitor and Education Center, the Soldier Experience Gallery allows visitors to experience the U.S. Army through the eyes of the men and women who have fought in the Army from the Spanish American War to Afghanistan through the presentation of artifacts and oral histories.

USAHEC holds numerous World War I related holdings such as photographs, manuscripts, artifacts and books. Lindsay Strehl, who works for the Programs and Outreach department of USAHEC, wants to stress the vast amounts of collections, such as memoirs and letters, which are open to the public for research. “We want to get the word out to the public that there are other places besides the National Archives to go for military records. For example, USAHEC has a large collection of unit history where a person can look up an ancestor’s unit and research information about the unit’s movements and actions during the war.” 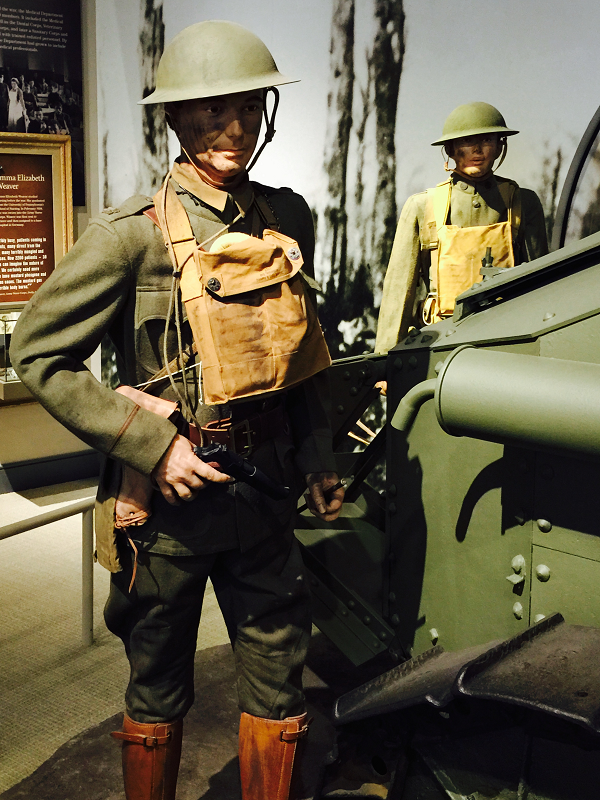 One of the major collections housed by USAHEC is the World War I Survey collections. Based on the success of the Military History Research Collection’s (MHRC) [now known as the Military History Institute] survey efforts on the Spanish- American War, Philippine Insurrection, and Boxer Rebellion, the MHRC initiated a similar project, designated the “World War I Survey,” as a means of acquiring primary sources. The MHRC turned to veteran organizations, such as the Veterans of World War I in the USA, and turned to newsletters and magazines in order to reach out to over 94,000 World War I veterans. Participants of the survey were encouraged to contribute their memoirs, reflections on their time of service, letters, diaries, maps, photographs, drawings, and camp and unit newspapers. In all, about 5,800 completed surveys were returned to the MHRC and survey efforts continue today. These collections are available today though the USAHEC.

The Soldier Experience Gallery contains an entire section on the experience of soldier fighting in World War I. In partnership with the National Constitution Center in Philadelphia, USAHEC helped create an exhibit on World War I Poster Art. The posters in the exhibit were created by artists in the Philadelphia Sketch Club in order to inspire Americans and increase the war effort during World War I. 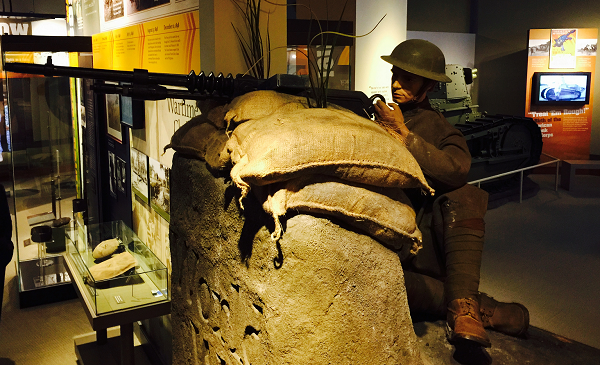 Outside the museum on the Army Heritage Trail, visitors can explore a recreated trench system and experience how soldiers in World War I fought and lived on the frontlines. Visitors can go into the Sniper’s nest and go into the trench’s aid station. The Army Heritage Trail encompasses the grounds of the USAHEC and covers about one mile, highlighting almost every era of Army history with different exhibits and artifacts. Besides the World War I trench system, the trail also includes a reconstruction of a French and Indian War way station and a section of the Antietam battlefield. Designed to provide an immersive experience for visitors, living history presentations also take place on the Army Heritage Trail.

USAHEC has millions of holdings relating to not just World War I, but also numerous conflicts involving the U.S. Army. The mission of USAHEC is to make available to the public both contemporary and historical materials related to strategic leadership, the global application of land power, and the U.S. Army Heritage though its archive, museum, and visitor and education center.

Cristina Tejada is a 2015 Intern at the United States World War One Centennial Commission.