It was an unusual morning on the steps of the New York City Public Library that first day of August 1918. The World War was at its height and American patriotism had reached a peak as well. Recruiting posters and posters to encourage people to buy war bonds seemed to be everywhere. Tables set up on street corners to recruit men for the service were common.

Even the steps of the library had been the site of other war-related rallies, but this Thursday in 1918 was unique. The commotion that began at 9 o'clock that morning was beginning to build. A platoon of Marines could be seen above the heads of the crowd -- dressed in field uniforms with traditional high collars, new steel helmets and rifles with fixed bayonets. At the center of the activity was a man in an artist's smock working on a stepladder as he painted his canvas. The stepladder was required because the canvas was larger than the artist or his subject-8 feet tall and 5 feet wide. His model stood on a pedestal a few yards away, where the crowd would have a good view. The model’s jaw was thrust forward in anger and he was frozen in the act of pulling off his suit jacket, ready for a fight.

The throng of spectators thickened as singer Al Jolson arrived and performed a new song titled after the same recruiting slogan that could now be seen on the canvas. Guest speakers and various officials appeared, too, as the day wore on, all to draw attention to the artist at work and the war effort in general. The scene was completed when a motion picture camera set up to capture the day on film. All expertly organized by James Montgomery Flagg to publicize his rendition of "Tell That To The Marines!" one of his most popular wartime recruiting posters.

Since the turn of the 20th century, America used famous artists, slogans and various psychological appeals to find recruits for military service. The Marines, historically an all-volunteer service, had been the most adept at using the poster as a successful recruiting tool. As the country edged towards war, many of these artist volunteered their services to the Marine Corps’ recruiting effort

As early as 1915, a volunteer group of artists was formed in New York under the direction of a small patriotic-minded council. The War Department had organized the group to produce posters to recruit men for service as the buildup for war heightened. The council matched requests from the War Department's Division of Pictorial Publicity with available artists.

Once a preliminary sketch was complete, it was sent from New York back to Washington, D.C., for final approval. For the Marine Corps, these requests for artwork originated at the U.S. Marine Corps Publicity Bureau, now established in Washington. Artists who provided artwork included such established artists as James Montgomery Flagg, Howard Chandler Christy and J. C. Leyendecker.

James Montgomery Flagg was perhaps the most famous of the poster artists. As one of the country's most flamboyant artists, he had established himself first as an advertising artist for Cream of Wheat in the late 180Os. By World War I, he was already the nation's foremost illustrator. During the war, he produced at least 46 posters, three of which were for the Marine Corps. His most recognizable work was for the U.S. Army. More than 4 million of his Uncle Sam "I Want You" posters were produced by the War Department during World War I. Another 400,000 were reprinted for use in World War II. Even as recently as the mid-1970s, the Army reproduced the poster for peacetime recruiting. The poster became synonymous with Flagg and with recruiting.

For the Marine Corps, Flagg not only created posters, but publicity events to help with war bond drives and recruiting. His most extravagant effort was "Tell That To The Marines!" He used an actor to pose for the work and later staged a repainting of the poster before a live crowd on the steps of the New York City Library. A man of no small ego, Flagg seemed particularly pleased with the event and gives it special attention in his autobiography:

"Another wartime innovation for which I was responsible involved the phrase 'tell that to the Marines!' It implied that the Marines are so gullible that they would believe anything. My poster of that title made it a fighting battle cry. I repainted the poster on a huge canvas on the steps of the Library with my model posing, and a platoon of Marines with bayonets marching about. Gus Edwards and Al Jolson both wrote songs using my title, and at different times each sang their version on the Library steps, yanking their coats off at the finale, as the man in my poster did."

In several of his works, Flagg used actual Marines as his models. In 1918, he painted "First In The Fight -- Always Faithful -- Be a U.S. Marine," using the captain who was in charge of the Corps' Publicity Bureau. At the start of the Second World War, Flagg was again active, producing two more posters for the Marines and several more for the war effort as a whole.

J. C. Leyendecker was an illustrator and advertising artist who came to America from Germany as a young boy. Before volunteering his talent for the production of recruiting posters, he had been successful as a cover illustrator for magazines such as Scribners and the Saturday Evening Post. Leyendecker had studied in Paris before the turn of the century and had won the prestigious Century Poster Competition in 1896. As an advertising illustrator, he became best known for his Arrow Shirt Collar and Chesterfield Cigarettes ads. His square-jawed "character," known as the Arrow shirt man, was the hallmark of his work-a character he continued to use in his posters.

Charles B. Falls was another early illustrator, recognized by some as the first true poster artist in America. He was chiefly responsible for transferring the European concept of the poster into an American style. The poster in its American form was meant to sell a product, and Falls applied this talent to the Marine Corps recruiting posters he painted in World War I. Shadowed style and rounded lettering, similar to the traditional French artists, were Falls' trademarks on his posters, such as 'This Device On A Man's Hat Or Helmet Means U.S. Marines."

One of Falls' most striking illustrations was of a Marine going "over the top" out of the trenches. Using the same background, it was paired with various slogans such as "Enlist Today," "Always First" and "EEE-YAH-YIP." Another of Falls' works featuring a Marine bulldog chasing a frightened German dachshund helped establish the new nickname of Devildogs that Marines had earned during the battle of Belleau Wood. The poster is titled "Teufelhunden (German nickname for U.S. Marine) Devildog Recruiting Station."

Falls had a special dedication to the Marines. As an established artist, he gave up many hours to serve as the Publicity Bureau's voluntary art editor during the war. Falls even went so far as to claim in publications that he would "give his undershirt to the U.S. Marine Corps."

Howard Chandler Christy was yet another artist for the Publicity Bureau who was established as a successful illustrator for books and magazines. What made Christy's work unique was his use of a female model, usually dressed in a military uniform, as the central figure in his artwork. In "If You Want To Fight, Join The U. S. Marines," his "Christy girl," as she became known, was dressed in a Marine's dress blue blouse. 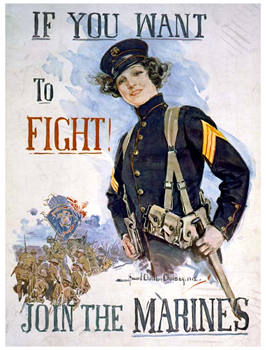 Christy's technique made his work some of the most recognizable and also some of the most reproduced. His poster for the Navy, "Gee I Wish I Were A Man, I'd Join The U.S. Navy," became especially popular. Interestingly enough, Christy later married the teenage girl who modeled for these works.

A sincerely patriotic man, Christy also produced posters for war bonds and rationing. Christy was still producing art for the Marine Corps in 1920, when he painted one of the first posters, "Fly With The U.S. Marines," aimed specifically at recruiting Marines into the aviation field. He volunteered his services again in World War II and produced several pieces of art, including a poster for the U.S. Army Air Corps.

Sidney H. Riesenberg was perhaps the most prolific producer of Marine Corps recruiting posters. His earliest works for the Corps were in 1913. During the war, he painted numerous posters of Marines in various action scenes such as amphibious landings and raising the flag over hostile territory. Included on almost all of his works were the two most popular Marine recruiting slogans of the war: "First To Fight" and "Soldiers of the Sea." 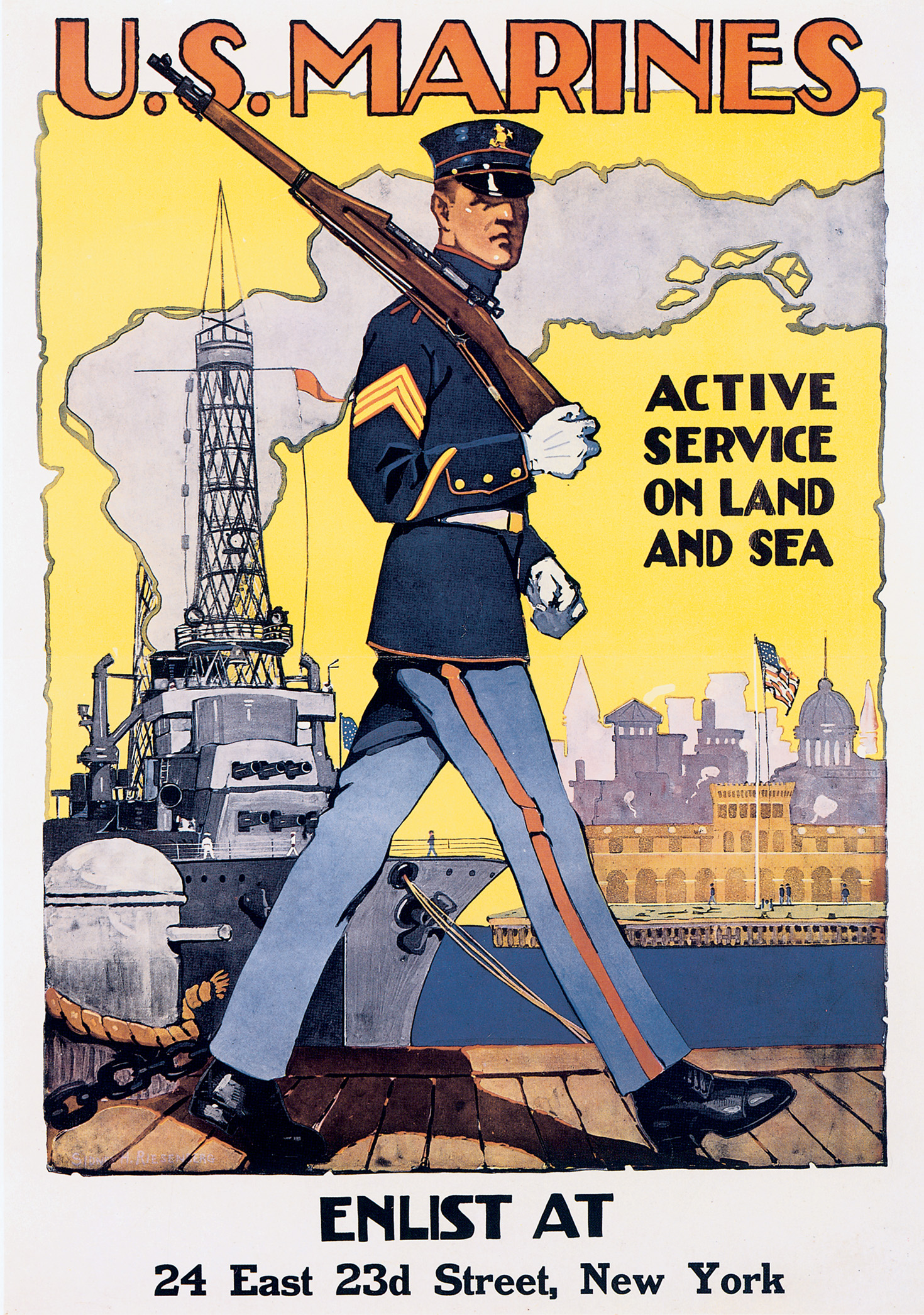 Riesenberg's most lasting contribution was a poster known to Marine Corps recruiters as "the walking John." This poster-a Marine sergeant in dress blues, walking his post with his rifle shouldered, and a battleship in the background-was used in various forms from 1917 until 1939. Like other artists, Riesenberg also pitched in to help paint posters for the home-front war bond drives and conservation of materials.

During World War I, posters were also produced by Leon A. Shafer. A cover artist for Literary Digest before joining the Publicity Bureau, he painted at least two liberty loan posters as well as recruiting posters. John A. Coughlin painted a noteworthy version of a Marine going "over the top" with a Lewis machine gun in hand, proclaiming "First In France-U.S. Marines." Artist Adolph Treidler provided the Corps with "Another Notch, Chateau Thierry," playing on the Marine's victory at that site.

The World War I period literally produced hundreds of recruiting posters for the services. Committees were formed, contests were held and art students volunteered, all making poster production in the United States higher than anywhere else in the world during the war. The effort, by the time the war reached its end, had helped the Marine Corps exceed all goals set for new enlistments. It also stocked the recruiter's shelves with artwork for the lean years between the wars that were to follow. It provided experience for artists and for new techniques of production. Early photomontage-type posters were seen, as well as collages of photos and illustrations intermingled on the same sheet.

After the war, with the Publicity Bureau still intact, the recruiting effort began to become a more and more streamlined business. Wartime themes like "first to fight" were replaced by different lures for peacetime volunteers. The Marines had learned from their experience before the war that "travel, adventure and education" were dominant themes that would attract the type of youth they sought.

The recruiting poster, as an alliance of art and psychological appeal, involved some of the best illustrators in the country and created some of the most lasting images associated with patriotic America.