THE U.S. MARINE CORPS RESERVE COMES TO THE FORE 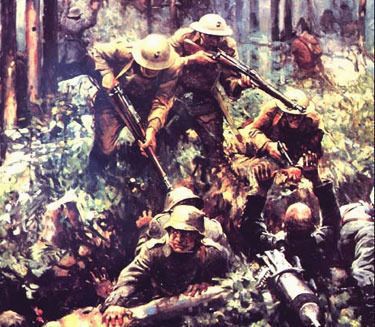 According to Ford, Congressional action proceeding the U.S. entry into the war helped support growing manpower needs of the Navy and Marine Corps, and ultimately gave the president more authority to mobilize the U.S. Naval Militia.

Reservists and National Naval Volunteers arrived in France as part of the AEF ground forces in notable strength. This included support units and infantry units, including the 4th Brigade, 2d Division. The brigade took part in actions in the Aisne defensive, Bouresches, Belleau Wood, Soissons, Saint-Mihiel, Blanc Mont, the crossing of the Meuse River, and service in the occupation of Germany. These action were not only key to allied success, but helped forge the enduring reputation for success the U.S. Marines enjoyed during and after the war. Ford highlights that the Marine Corps’ November 1918 muster rolls for the 4th Brigade, 2d Division, AEF, reflect 28.9 percent (86 of 212) of the officers and 11 percent (1,040 of 8,372) of the enlisted men in the brigade were Marine Corps reservists. In November 1918 the Reserve attained its highest strength: 6,773.

Marine Reservists also served in U.S. Marine Corps regiments tasked with defense of vital supplies and contingencies in support of the war in Europe. The 7th Regiment was activated and deployed to Cuba to ensure unrest did not disrupt the allied sugar supply. One third of the regimental headquarters complement were reservist transferred from the 1st Marine Reserve Company, Marine Barracks Philadelphia.

Oil was another resource critical to the Allied war effort. The U.S. Navy and Allies were dependent on the Mexican oil fields, but the continued turmoil of the Mexican Revolution in 1917 caused concern. The 8th Regiment arrived at Fort Crockett, Texas, on Galveston Island on November 18, 1917. The regiment’s mission was to prepare to move swiftly to land on the Mexican coast and seize the major oil fields near Tampico, Mexico. The 8th Regiment, joined by 9th Regiment in August 1918, remained at Fort Crockett until early 1919.

The sacrifice and commitment of Marine Corps reservists is also documented in Ford’s article, in addition to combat deaths and wounds received, he highlights the valor of these Marines:

“Decorations awarded to reservists punctuate the significance of the contributions the Reserve made to the war effort. One Marine reservist, Second Lieutenant Ralph Talbot, earned the Medal of Honor. Forty Marine reservists or Marines enrolled via the Naval Militia or National Naval Volunteers were awarded the Navy Cross with many also earning a Distinguished Service Cross for the same actions….Captain Percy D. Cornell, who entered the Marine Corps via the Texas Naval Militia, Marine Branch, was awarded the Navy Cross twice for separate actions.” 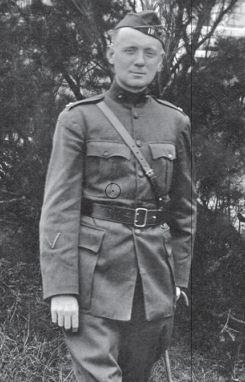 (Marine Corps History Division photo) Captain Jonas H. Platt resigned from the National Naval Volunteers to accept a regular commission in the Marine Corps in September 1917. He earned a Navy Cross and a Purple Heart in the battle of Bois de Belleau on 6 June 1918.