Frank Buckles, a 110-year old VFW Life member from West Virginia, was the nation's last living link to World War I. His death in 2011 marked the end of the Doughboy generation.

As a 16-year old farm boy in the summer of 1917, Frank Buckles couldn't wait to join the military. With a war going on, the ambitious young man wanted to get out of the Midwest and see the world. 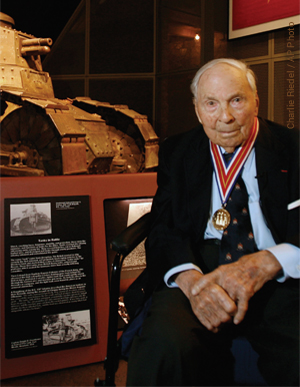 Frank Buckles tours the National World War I Museum in Kansas City, Mo., on May 25, 2008. He had just been presented the VFW Commander-in-Chief Gold Medal of Merit.

“I was interested in the war,” Buckles said. “I’d been reading the newspapers since I was a child. I was a wireless [radio] amateur, and the war was interesting to me.”

He tried the Marines first, but they balked at his age. He tried the Navy, but they told Buckles he was flat-footed. Finally, he convinced the Army he was worthy and enlisted in August 1917. His main goal, he said, was to get to the war zone.

“A knowledgeable old sergeant said, ‘If you want to get to France right away, go into the ambulance corps,’ ” Buckles recalled in 2001 during a Veterans History Project interview for the Library of Congress. “And he sent me to Fort Riley, Kan., where they were training for ambulance service and trench retrieval.”

Assigned to the 1st Fort Riley Casual Detachment, he sailed with his unit of 102 men to England in December 1917.

“‘Casual’ means unassigned, and we were expecting to go direct to France,” he said.

Instead, his outfit replaced a unit of the 6th Marines that did travel on to the war zone. Determined to get there, too, Buckles said he used several methods, such as “pestering every officer of influence in the place, including the commandant colonel.”

Buckles finally got to France that December, and said his job there was to drive a car and an ambulance.

“I took various assignments,” Buckles, who was a life member of VFW Post 896 in Martinsburg, W.Va., said in 2007. “My situation was different. Most men belonged to one unit, one group. For instance, after the war, I belonged to the 7th Regiment of New York and many of the men were overseas. But their experience you could pick up in the history of the 7th Regiment, even down to C Company, to which I belonged. But with me, I was in Europe by myself.”

Buckles said the closest he got to combat was “about 30 or 40 miles.” He served in the Gironde area, St. Andre de Cubzac, Bassens, Bordeaux and St. Sulpice, “where there were great warehouses and a camp for German prisoners.”

Eager to get a job where he would be “close to where the decisions were made,” Buckles tried business school. But he said that didn’t work out because “I just didn’t have any connection with the civilian people.” Buckles then took a job with the White Star Line, a shipping company located in New York. It launched a career that would take him around the world.

In 1931, he joined VFW. Ten years later, while working for the American President Line shipping company, Buckles found himself at the epicenter of America’s entry into World War II.

“It was December 8 in the Philippines, December 7 back here,” he recalled. “Within a few hours, the Japanese were bombing the various installations, including the piers, which I would be associated with in the steamship business.”

Captured by the Japanese, Buckles spent three years and two months in a POW camp.

“The bad part was the starvation,” he said. “The Japanese had never had experience with the prisoners.”

Then living peacefully in Charles Town, W.Va., Buckles gained national and international recognition. He received the French Legion of Honor in 1999, and NBC Nightly News profiled him Memorial Day 2007.

In March 2008, he met with President George W. Bush in the White House. Then in April a section of state Route 9 in West Virginia was dedicated in his honor.

On Memorial Day 2008, he was a guest of honor at the National World War I Museum at Liberty Memorial in Kansas City, Mo. VFW awarded him the Commander-in-Chief Gold Medal for his “extraordinary achievements and as a cherished representative of all World War I veterans.” (Buckles was born near Bethany in Harrison County, Mo., in 1901.)

“He is a superhero of American and world history,” David DeJonge, a Grand Rapids, Mich.-based portrait photographer who profiled Buckles, said in 2007. “He lives on an old farm that overlooks [Civil War-era sites] Antietam and Harpers Ferry.”

Buckles said his time in the military had a profound effect on his long life.

“Even though I didn’t talk about it and didn’t discuss it with people, I knew that I was entirely different,” he said. “When I came back, not associating with anyone except the military, I knew the best thing for me to do was to get out of that atmosphere, not to continue to talk about it, to get out on my own.”

Frank Buckles died of natural causes on Feb. 27, 2011, at his home. A ceremony in his honor was held nearly two weeks later on March 12 at the Liberty Memorial in Kansas City, Mo. He was buried with full military honors in Arlington National Cemetery on March 15, 2011.

Shortly thereafter, VFW’s then-Commander-in-Chief Richard Eubank noted the occasion with words appropriate for the centennial of America’s entry into WWI.

“We must ensure the memory of WWI veterans’ courage and sacrifice so it won’t fade or disappear into anonymity. That would be an irretrievable loss to the nation, one that we cannot afford,” Eubank said.

This article is featured in the April 2017 issue of VFW magazine and was written by Tim Dyhouse, senior editor, VFW magazine.