The American hymn tradition was spearheaded by Horatio Parker. Acknowledged by many musicians as the “most representative church composer in America,” he began 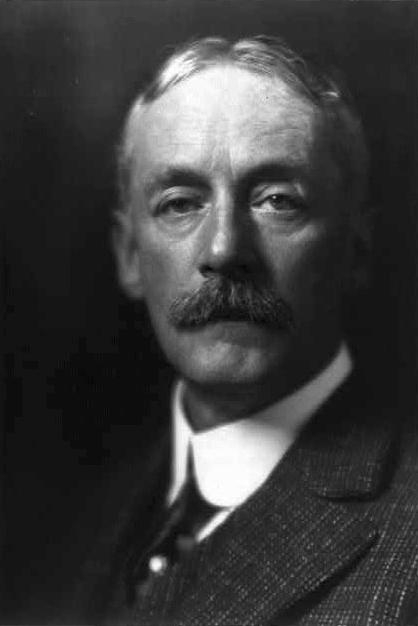 Horatio Parker his career as an organist and choir director at Trinity Church in Boston.16 He was later appointed Battell Professor of music theory at Yale, a position he would hold until his death. He was well respected as a teacher and would go on to teach many prominent American musicians including Charles Ives. World War I was especially difficult for Parker. During his student years, he studied in Munich and visited many of the countries that were now on both sides of the war. With America’s entry into the war, Parker was troubled by the discrimination against all things German that was now the popular trend among many Americans.17 However, Parker did not object to the war effort and supported it by diverting royalties from his compositions to relief efforts.18 Prior to the war, Parker composed a three-page patriotic hymn, “Gloriosa Patria” in 1915 followed by An Allegory of War and Peace for mixed chorus and band in 1916. The Boston Herald described Allegory as “one of the most dramatic scenes…depicting…mothers who have given their sons for both war and peace.”19 The similarity of the mother theme described in the Herald review and Tin Pan Alley songs popular during America’s neutrality period such as I Didn’t Raise My Boy to be a Soldier and Don’t Take My Darling Boy Away is evident here. In 1917, Parker informed Novello, his London music publisher, that he wanted his royalties to be diverted towards the music section of the Professional Classes War Relief Council. In support of the women who sacrificed their lives during the war, Parker wrote The Red Cross Spirit Speaks as his next wartime song. Briefer and perhaps as a way to advertise his loyalty to America, a version for orchestra and soloist was premiered at Carnegie Hall in 1918 with Louise Homer as the soloist and orchestra conducted by Walter Damrosch. The piece later appeared in several choral arrangements.20 Parker also composed the Hymn for the Victorious Dead in 1918.

Parker was selected by the Protestant Episcopal Church as the principal editor for the new edition of The Hymnal. The preface explicitly says that the hymns are “intended to voice our yearning for larger social service, for deeper patriotism, for a more eager obligation to the winning and maintaining of a free world, for a higher enthusiasm towards the unity and extension of Christianity.”

The preface of the hymnal is clear in its relationship to the war: “This Hymnal of 1918 cannot escape the marks of the Great War, - its tragedy, its sympathy, its loving sacrifice, its gratitude because God has given us the victory for the right and the true.”

Parker’s last composition, A.D. 1919, was perhaps his greatest contribution to memorializing the war. A.D. 1919 was written in the spring of 1919 as a memorial to the Yale students who gave up their lives in the war. Scored for mixed chorus, soprano, and orchestra, A.D. 1919 was highly praised and frequently performed at official ceremonies in Yale. However, the piece never made it to the public concert hall. A.D. 1919 later became known as The Ode.21

Many hymns were adapted as marching songs and would have been familiar to soldiers. While singing hymns on the front would have been an expression of faith in times of danger and bereavement, Christian churches back home used hymns to accommodate their faith and the idea of a justifiable war. Religion masked political agenda and the voices of conscientious objectors and peacemakers were ignored. Secularization was now the tune of churches and nationalism spread throughout the country and the concert hall. Public meeting spaces replaced churches as the most popular of sanctuary to hear the nationalistic gospel of faith and the strength of the country.