Religious Music during the War

A great deal of wartime music was composed to convey religious faith or express deep feelings of grief, but as will be explored in this section, religion was also used for political propaganda purposes. Both Central and Allied Powers conducted religious field services using hymns. As seen in American popular songs, many of its religious songs referenced to the power of prayer, especially after the Germans destroyed the Rheims Cathedral. The illustration on the sheet music cover of the 1918 song, “The Tale the Church Bell Told,” 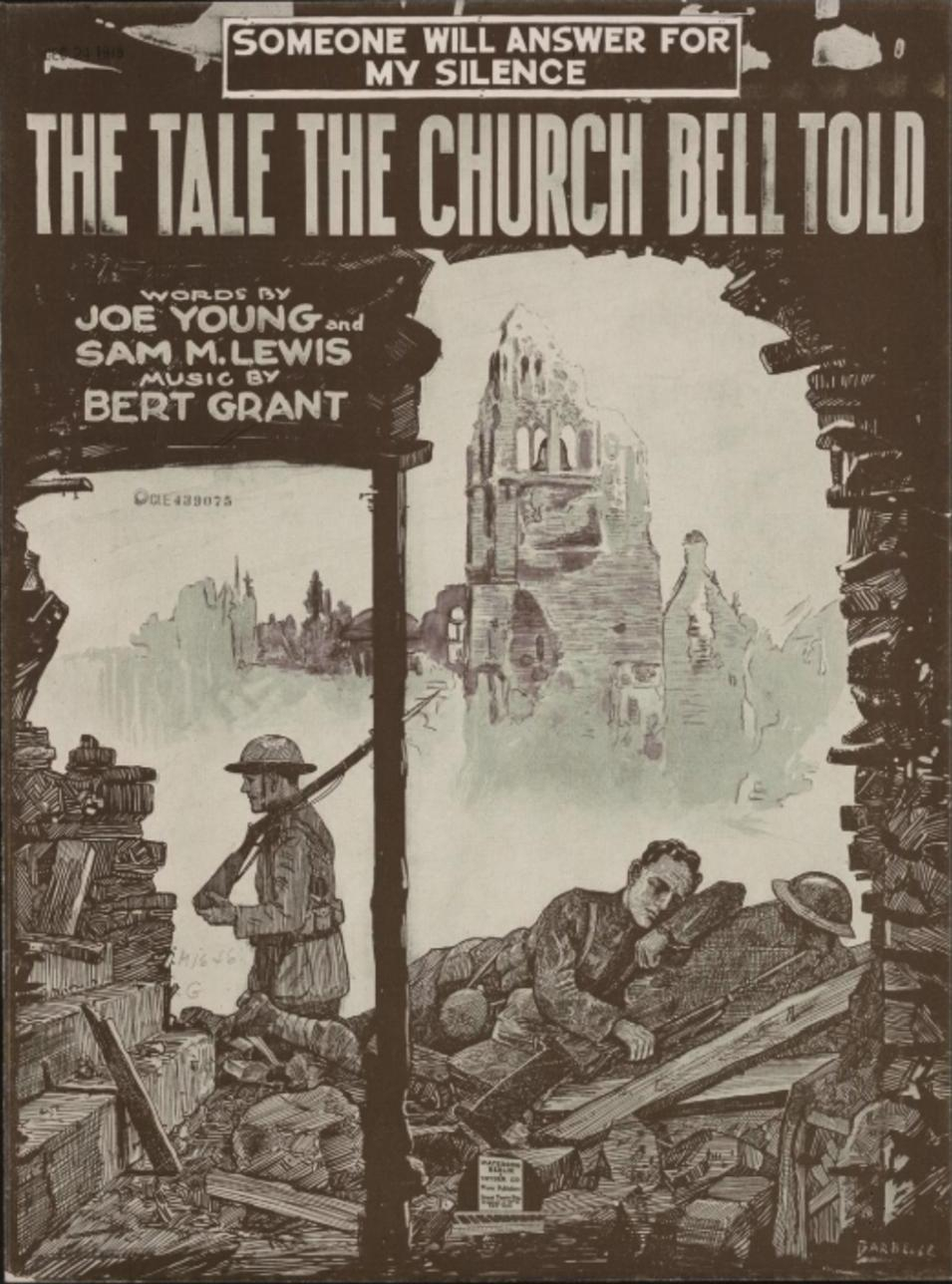 connects the idea of a damaged church to a destroyed country village. Religious imagery in songs was used to convey a message of the fragile human spirit in material terms. The stark contrast between the rosy image of war painted at home and the subhuman conditions experienced by soldiers in the trenches made people realize the fragility of the human condition. Just as in the cover for “The Tale the Church Bell Told,” Watkins points out that “literary portrayals of bombed villages frequently began with a description of a church spire from a distance – not only because it was a feature that typically dominated the horizon but also because narrative attempts to connote the real world were always in search of a satisfactory code that could represent the most elevated aspirations of the human spirit.”1

Religious American songs often carry overtones of a holy crusade for democracy. The ideas that Americans were the custodians of righteousness and charged to challenge the ideologies of the old world were the mindsets of many pro-war Americans. Though most of the Christian ministers preached to “love thine enemy” initially, the rise of modern Nationalism swept the country eventually. Preachers headed by Billy Sunday soon changed their tune to pro-engagement. 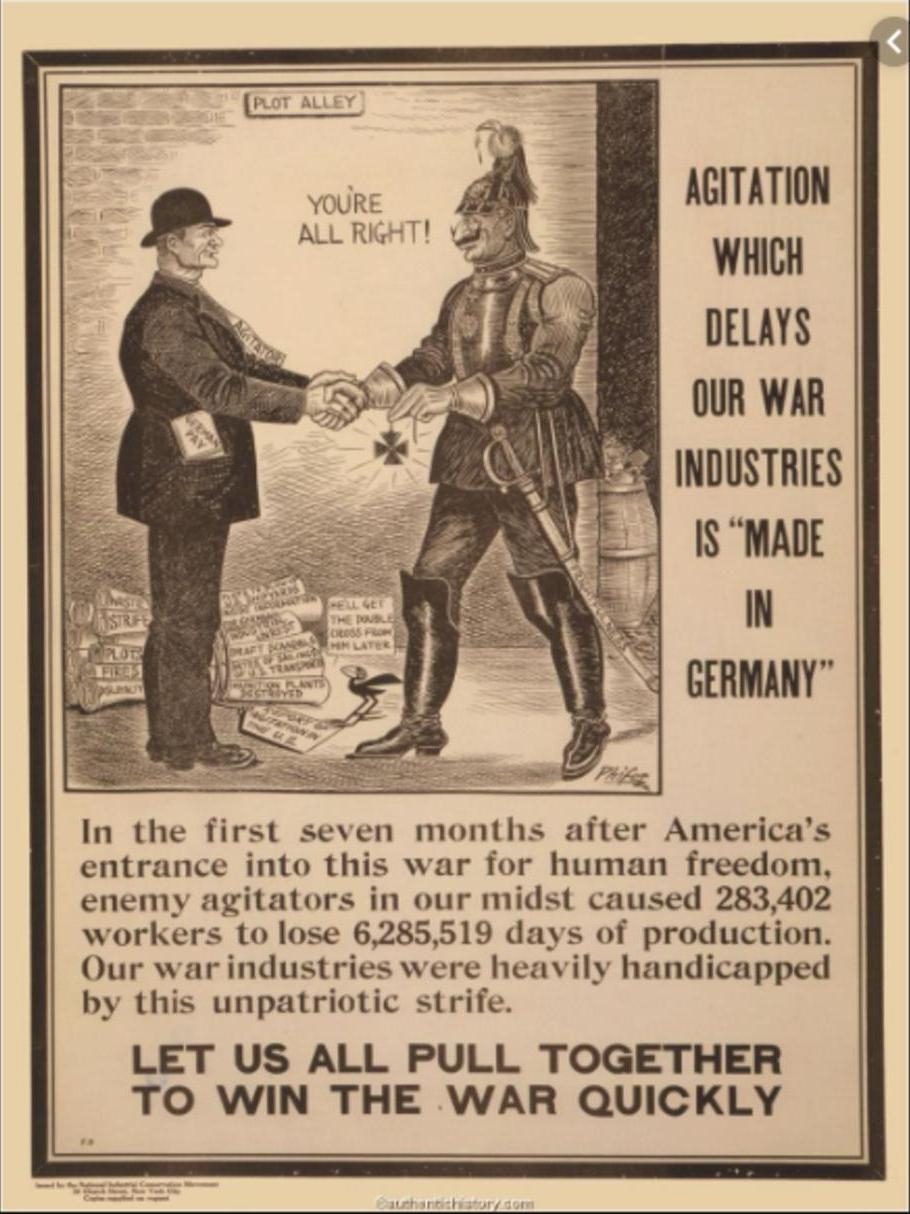 Before the war and during the course of the Prohibition movement, underground beer-drinking communities that were mostly managed by German immigrants were frowned upon by the evangelistic movement of anti-immigrant Protestant preachers. They distanced themselves from Germans and their beer whom Protestants saw as “direct agent of the Kaiser in America.”2 Thus, the anti-immigrant American Protestants and the beer-drinking culture of the German migrants were already at odds even before the war started. When America did enter the war in 1917, it was easy for Americans supportive of Prohibition to use this momentum to transfer their animosity towards the Germans - from beer to Germany - under the rallying cry that alcohol was the source of all evil.

Many Americans viewed the war as a “crusade for democracy.” Ray H. Abrams notes that “the rise of modern Nationalism has become a religion with its sacred scriptures, dogmas, ritual, propaganda, priests and devotees. It has in the absence of a national church in this country become a great unifying religious force for all the peoples of the nation.”3 In another article, John H. Piper terms the change the Great War brought about as “the beginning of something, and that something can be called secularization.”4 On both sides of the Atlantic, religion found its role of teaching morals ever-changing and militaristic books appeared with titles such as The Call of the Sword, The Twentieth Century Crusade, and Christ’s Challenge to Man’s Spirit in This World’s Crisis. Religion was now viewed as an agent for struggle to prove one’s patriotism and national identity.

Music’s purpose in religious services has always been to complement the ritual and message of the sermon. With preachers calling for war support, militaristic themes were 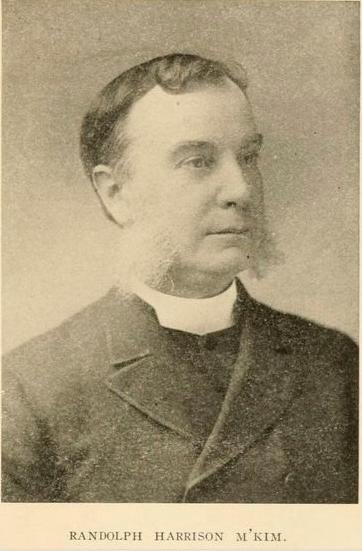 Rev. Randolph McKimthe tune of the day such as “Onward Christian Soldiers.” Randolph McKim delivered his sermon to a Washington, D.C. congregation in 1918 urging people that “It is God who has summoned us to this war. It is His war we are fighting…. This conflict is indeed a crusade. The greatest in history – the holiest. It is in the profoundest and truest sense a Holy War.”5 Across the Atlantic, Reverend Archibald Alexander told his congregation that while hymns like “Gentle Jesus Meek and Mild” were proper for children, the country needed “The Son of God Goes Forth to War” in this time of crisis.6 The blindingly hypocritical attitude of preachers telling a congregation to “love thine enemy” and fight a crusade did not go unnoticed and contributed to the impression showing churches operating in ineffective and outdated ways. Churches failed to function as a resource for spiritual guidance and a sanctuary of solace but rather as a loudspeaker for political propaganda. Although church and state were already separate, the two institutions were still allying with each other. It should be no surprise then that people found the confusing religious messages as a cue to turn away from organized religion.7

Just like on the home front, chaplains on the battle front fed the same confusing homilies to soldiers. A doughboy of the 63rd Division parodied the hymn “Stand Up, Stand Up for Jesus, Ye Soldiers of the Cross”:

I do not wish to hurt you
But (Bang!) I feel I must.
It is a Christian virtue
To lay you in the dust.

You – (Zip! That bullet got you)
You’re really better dead.
I’m sorry that I shot you –
Pray, let me hold your head .

The paradoxical message of classifying the war as religious is no blindingly more hypocritical than Rev. Charles A. Eaton’s message to his Madison Avenue Baptist Church 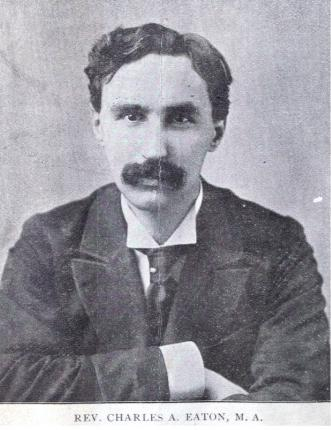 1. Watkins, p.273
2. Watkins, p. 275
3. Abrams, xvi–xvii.
4. Piper, p. 149
5. McKim, pp. 116 –117.
6. Bedborough, pp. 21, 31.
7. In an article from the Economist entitled “From godlessness to ruthlessness,” (May 6, 2014) the author going by the pseudonym “Erasmus” notes that the decline in the importance of religion during the war was evident throughout the world. Theocratically-based regimes such as the Russian and Ottoman empires were replaced with secular forms of government and American preachers had to come up with explanations on why to support the war even though they risked corrupting the message of the church.
8. The Mudhook, 5 May 1918, p. 12; cited in Fuller, Troop Morale, 156 and Watkins 274.