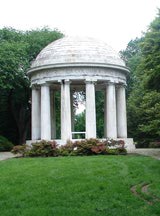 The modest granite marker that sits close to Salisbury Street is the smallest memorial on the grounds of the North Carolina State Capitol, but it commemorates the valor of the men of the 81st Division and the role they played in World War I.

Nicknamed the “Wildcat Division” for their reputedly ferocious and unyielding spirit, these soldiers distinguished themselves in the fighting in France, participating in the occupation of the St. Die sector and the offense at Meuse-Argonne. The 81st Division was initially made up of men drafted from North Carolina, South Carolina, and Florida. The first men sent to the division were part of the first draft of September 5, 1917.

The division was organized at Camp Jackson, near Columbia, South Carolina, in September 1917 and went into training. In May 1918 it was sent to Camp Sevier, near Greenville, South Carolina, and in July it was ordered to New York to be shipped overseas. In August the division sailed to England and then to France.

It was initially sent to the trenches in the Vosges Mountains in September where it held what was considered a quiet front, though the division suffered 116 casualties there. On November 6, the division was transferred to the front east of Verdun, on the east side of the Meuse River.

Starting on November 8 the division attacked German positions for two days with limited success. From the outset the 81st Division's troops were met with heavy German machine gun and artillery fire. Rumors reached the 81st Division commanders that an armistice might be signed on November 11, but because no official word was received about a cessation of hostilities, they ordered their men to continue their attacks. At daybreak, November 11, 81st Division soldiers were ordered to assault German positions.

The troops slowly advanced through the heavy fog and German shell and machine gun fire. Then, at 11:00, the firing abruptly stopped. The war was over.

The 81st Division suffered 1,104 casualties--248 killed or dead from wounds and 856 wounded--for the short time it was in combat. Like the 30th Division, the 81st Division remained in France and was not part of the Army of Occupation in Germany. In early June the men were shipped back to the United States and discharged from service. N.C. Highway 20 was called the "Wildcat Highway" in remembrance of these men. Highway 20 ran from the state's western border in Madison County southeast to Wrightsville Beach.

Today this road is known as U.S. Highway 74. The memorial was dedicated on October 5, 1941, by the Wildcat Veterans’ Association to honor the North Carolina men of the 81st Division. The marker was dedicated as “an inspiration from the past and a warning to the future.”

"In honor of the Citizens of Wilkinson County who served the Military Forces of our county, state and nation from the Revolution War to present and those who may serve in the future”

The Willmar Auditorium built by WPA is one of the most handsome auditoriums in Minnesota. It has two stories and a basement. In some sections of the building it has a third story. It was built at a cost of $160,000. The building has a concrete foundation, reinforced concrete slabs, steel roof trusses, and a wood roof. The walls are of brick with stone trim. The sculpture over the entrance was done by the Federal Art Project. The basement accommodates a band room, dressing rooms, showers, and mechanical equipment rooms. On the first floor are the auditorium, stage, and kitchen and war memorial room. The second floor has meeting rooms and a projection room.

PWA Moderne realized primarily through a pattern of contrasting stone
inlaid in the brick walls. Over the entrance are three relief panels in stone depicting the glories of agriculture, government, and transportation.

The Willmar War Memorial Auditorium features engraved stones from each state to honor Minnesota veterans. It was built between 1935 and 1938.

Wilmington, "Spirit of the American Doughboy"

This is a life-size cast metal WWI doughboy wearing a pack and advancing through the stumps and barbed wire of No Man's land. In one hand is a rifle and in the other, a grenade. It was sculpted by E.M. Viquesney and was formerly In the collection of the Wilming­ton Light Infantry.

Winchester
IN
USA
47394
Ernest Moore Viquesney
This monument features one of E. M. Viquesney's "Spirit of the American Doughboy" statues.

This sculpture by Herbert Adams is of two bronze female figures representing Justice and Humanity, standing together in front of an American flag. They hold a wreath, each with one hand. One also holds a laurel branch and the other holds a sword. Beneath them is a rectangular Stony Brook granite base resting on two steps. It was dedicated on October 3, 1926, as a tribute to the Winchester men and women who served in WWI.

The sculpture was unveiled by two GoldStar mothers, Mrs. Charles V. Leach and Mrs. Cordelia Cater, after whose sons the Olympia posts of the American Legion and the Veterans of Foreign Wars were named. The dedication address was presented by Stephen F. Chadwick, national chairman of the American Legion’s Americanism Committee.

The bronze sculpture features a 12-foot tall figure of Winged Victory surrounded by the figures of a soldier, a sailor, a marine, and a Red Cross nurse.

Although, there is plenty of space on this monument, and the inscription reads:

Sadly there are no names engraved here.

This memorial consists of a small stone located near the east riverbank of the Wisconsin River in Veterans Memorial Park. And it was dedicated by the Daughters of the American Revolution (DAR) in 1919.

The stone bears an inscription which reads:

In recognition of the Loyalty & Patriotism of the Winnebago Indians

While searching in the Boston Globe newspaper archives on that newspapers internet archive, I found a story from the newspaper published on 20 September 1920 which mentions the unveiling of a memorial on the lawn of a state building in Wintrop, Massachusetts. The memorial was raised by the Special Aid Society for American Preparedness and was placed in front of the Edward B Newton School.

This is a 15 foot tall granite stele dedicated in June of 1926 in memory of the residents of Woburn who died, and those who served, in WWI. On the stele is the image of an allegorical female Liberty, with a torch in one raised hand and a flag in the other. On each side are granite tablets depicting a soldier and a sailor in profile, holding rifles. A bronze eagle is on top, with wings spread and perched on a bronze globe.

Burt W. Johnson sculpted this life-size bronze male soldier with a bandaged and bowed head, with both hands clasping the barrel of his rifle and his helmet. It was erected in 1923 as a tribute to the vet­erans of WWI.

The Women of Iowa World War I Memorial, also known as The Women in White Memorial,  is dedicated to all Iowa women who served and died during Iowa’s participation in World War I.  It is located on the campus of the Iowa State Capitol.  On May 31, 1921, a simple grove of birch trees was planted on the Iowa Capitol Campus to commemorate the lives of Iowa women who gave their lives in the service of our country during World War I. Over time, some of those trees perished and the memory of that grove vanished. For the World War I centennial, this memorial was established to recreate and rededicate a site on the Capitol grounds to insure that the sacrifices of these women will never be forgotten again.

This war memorial, the largest in Broken Arrow's Veteran's Park, honors American women's contributions on the battlefield and the homefront from the Revolution to the present day. Pictured in the monument's WW1 section are ordinance workers, American Red Cross workers, "farmerettes" with tractors, and women making flags.

Yellowstone County, Montana, commemorated the honorable WWI military service of twenty-three women with ties to the county. That means they were either born in the county, entered federal military service from the county, or are buried in the county. Memorial is the first of its kind in the county and probably in Montana. Memorial dedicated April 6, 2017, in public ceremony. Disabled American Veterans, Billings Chapter, provided the memorial and conducted the public ceremony. Memorial is the work of a local war veteran and historian, Edward E. "Ed" Saunders, who spent over 5 years researching and finding these women. The Billings Gazette newspaper covered the event and printed a front page story in the Gazette’s April 7, 2017, edition.

This memorial, which also contains sections for World War 2 and Viet Nam, is located next to the fire station in downtown Woodland.

Woodville, "The Spirit of the American Doughboy"

A life-size bronze statue of a WWI doughboy is depicted with a rifle and grenade, advancing through the stumps and barbed wire of No Man's Land. It is mounted on a base of brick with a concrete top. It was sponsored by the Exchange Club of Woodville, sculpted by E.M. Viquesney, and dedicated on October 16,1927. The base was designed by Alton Weigel.

Memorial Grove was established in 1928 to honor the veterans of Worcester, MA who died in World War I.  It consists of an iron gateway set in two blocks, and a pink granite marker set on a concrete pathway leading into the grove.

Although far from the combat fronts, Berkeley was one of California's largest cities during World War I and participated in the war effort in many ways, including critical manufacturing, training of servicemen, war-related research at the University of California campus, and volunteer and patriotic programs in the community.  At least 100 Berkeley men did not return from the war.  They were remembered with a plaque that was later permanently installed on Berkeley's Veteran's Memorial Building in 1923.  The plaque was restored and rededicated on the Centennial of Armistice Day in 2018.