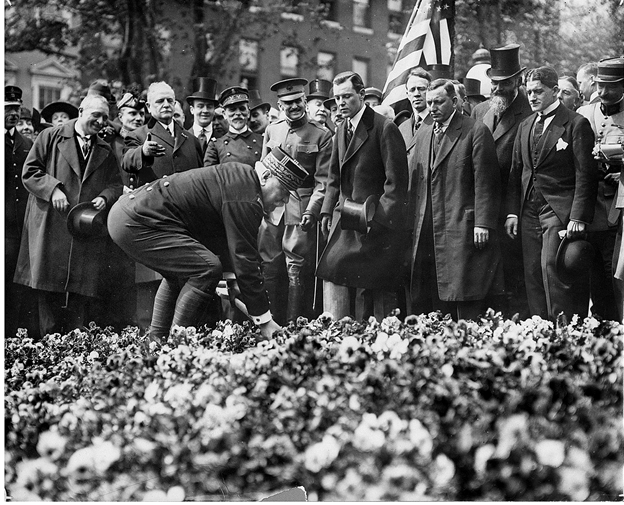 Mount Vernon Place in Baltimore, Maryland, is a National Historic Landmark District. It’s centerpiece is the Washington Monument the first monument begun to honor the founder of the United States, George Washington. Erected by a board of Baltimore citizens, and designed by American architect Robert Mills, the cornerstone was laid on July 4, 1815, and marblework of the column was largely complete when the statue of Washington was raised to the top in 1829. Carved by Enrico Causici, the statue depicts Washington resigning his commission as Commander in Chief of the Continental Army at the close of the Revolutionary War.The squares of Mount Vernon Place were formally laid out in 1831, and over time it became the home of impressive mansions and public buildings.On May 14, 1917, several weeks after the United States entered World War I. Baltimore’s then Mayor James H. Preston invited the French War Delegation, in the country soliciting the assistance of the United States Government, to come to Baltimore so that its citizens could demonstrate “the feeling of affection which the city holds for them.” In the shadow of the Washington Monument, with thousands in attendance, the French war hero Marshall Joseph Joffre, René Viviani, the French vice premier and minister of justice, and the marquis Pierre de Chambrun, a great-grandson of Lafayette, broke ground for a statue of the Marquis de Lafayette. The groundbreaking led to the redesign of the squares of Mount Vernon Place by the New York firm of Carrère & Hastings, to the design in place today, creating a setting that linked Lafayette with his Revolutionary compatriot George Washington. As the work continued, both President Woodrow Wilson and French President Raymond Poincaré were asked by Mayor Preston to provide moving inscriptions, celebrating two centuries of Franco-American relations, for the statue’s pedestal. These inscriptions were written after peace had been declared: Wilson inscription:“Lafayette, immortal because a self-forgetful servant of justice and humanity. Beloved by all Americans because he acknowledged no duty more sacred than to fight for the freedom of his fellow men.”Poincaré inscription (in translation):“In 1777 Lafayette, crossing the seas with French volunteers, came to bring brotherly help to the American people who were fighting for their national liberty. In 1917 France was fighting, in her turn, to defend her life and the liberty of the world. America, who had never forgotten Lafayette, crossed the seas to help France, and the world was saved.”The statue of Lafayette, by American sculptor Andrew O’Connor, was dedicated on Lafayette’s birthday on, September 6, 1924, with President Calvin Coolidge, the Governor of Maryland, Albert C. Ritchie, and the Mayor of Baltimore, Howard W. Jackson, in attendance. Because of the addition of this statue, Mount Vernon Place is not only a memorial to George Washington and the ideas of American democracy and nationhood, but a World War I memorial.

201 West Monument Street, Baltimore, MD, 21201
Baltimore
MD
USA
21201
www.mdhs.org
Founded in 1844, the Maryland Historical Society (MdHS) is the state’s oldest continuously operating cultural institution. In keeping with the founders’ commitment to preserve the remnants of Maryland’s past, MdHS remains the premier institution for state history. With over 350,000 objects and seven million books and documents, this institution now serves upward of 100,000 people through its museum, library, press, and educational programs.

In addition to their ongoing mission to preserve and publish Maryland’s history, the leaders of the society took responsibility for recent history. As their predecessors had done after the Civil War, society leaders stood at the forefront of collecting "the relics" of the recent Great War. In 1920, the state legislature formed a committee of three that included former governor and historical society president Edwin Warfield. This group comprised the Historical Division of the state’s War Records Commission and served as the "official organ" of the federal government in collecting and compiling the military records of those Marylanders who served in World War I. Additionally, education ranked as a high priority, and the post-war MdHS reached out to the city’s public schools with teacher workshops and tours.

The H. Furlong Baldwin Library’s collections are both diverse and substantive. The library enables researchers, teachers, and students to see for themselves the records of the past, and to study and learn from its many treasures. The library’s collections include 60,000 books, 800,000 photographs, 5 million manuscripts, 6,500 prints and broadsides, 1 million pieces of printed ephemera, extensive genealogy indexes, and more, reflecting the history of Maryland and its people. These collections are accessible to visitors on-line and at the MdHS campus in Baltimore.

In 1973, with the permission of Major General Edwin Warfield III, the Adjutant General of Maryland, a group of dedicated Guardsmen, headed by Colonel Edmund G. Beacham, formed the Maryland National Guard Memorial Library Committee. The committee’s purpose was to keep alive the deeds, memories, and memorabilia of the Maryland National Guard so that future generations would have available to them the history of the Maryland Guard and the people who created it. The group met periodically in The Adjutant General’s Conference Room at the Fifth Regiment Armory in Baltimore, although the number of members and degree of participation varied.
In March 1981, funds became available and, with the concurrence of Major General Warren D. Hodges, The Adjutant General of Maryland, the Board Room of the 175th Infantry Regiment, located in the Fifth Regiment Armory, was selected to house the Maryland National Guard Museum. The museum was dedicated on October 24, 1982.

With the establishment of a permanent museum, G eneral Hodges requested that the library committee continue to function and recommended that it become the Maryland National Guard Military Historical Society and take over management of the Pikesville Military Reservation Museum as well. In response to this recommendation, the Maryland National Guard Military Historical Society was incorporated as a non -profit organization to oversee museum operations, with Colonel (USA Ret) Bernard Feingold serving as Museum Director.

Over the years, the museum grew and prospered, eventually expanding to occupy all the former offices of the 175th Infantry Regiment. In addition, beginning in 2001, the museum began expanding into several adjacent spaces. When renovations were complete, these became the museum art gallery and the Hancock Memorial Library.

On May 13, 2003, Major General Bruce F. Tuxill, The Adjutant General, instituted new policies governing the operation of the Maryland National Guard Museum. To bring the museum into compliance with Army regulations, the Maryland National Guard Military Historical Society agreed to transfer all artifacts to state ownership and the State of Maryland Military Department historian was designated as custodian for the museum’s collection of artifacts, items, and documents.

The Maryland Military Historical Research Center includes the finest collection of archival material in the United States devoted to a single U.S. Army division, the 29th Division. Scholars from all over the world regularly pay visits to the center to uncover archival documents related to the rich history of the 29th, including its participation in the Omaha Beach invasion on D-Day, June 6, 1944. Archival holdings also include many significant documents from the long and rich history of the Maryland National Guard. The center is open to the public by appointment.

The mission of the Veterans Museum at Patriot Park is to recognize and honor all U.S. Military Veterans.
Those who fought on the battlefields and those who served in support of them should be remembered and honored so that future generations never forget the sacrifices that these men and women have made.

The Commissioners authorized leasing of the Glasva Elementary School site for the Museum. The site has a total of 7.7 acres located on the northbound side of Route 301. The location is approximately 8 miles south of La Plata and 5 miles north of the Maryland Visitors Center.

The property is also bounded on the south side by the Glasva Road which is a paved county road. The Center is accessible from the Route 301 North lane. This site also overlooks one of the most scenic natural views in the county, Allens Fresh.