In Sacrifice for Liberty and Peace:
Centennial Commemoration of the U.S. Entry into World War I

Hosted by the U.S. World War I Centennial Commission
at the National WWI Museum and Memorial in Kansas City, MO

John Brancy, Baritone,
with the 1st Infantry Division Band,
as the Patrouille de France flies over

Narrator –– John Rensenhouse, followed by a moment of silence;
a B-2 from the 509th Bomb Wing, Whiteman Air Force Base;
the "Tolling of the Bell", by Christopher T. McLaurin, Principal Percussionist, Kansas City Symphony, finishing with a canon salute
led by Artillery Master Charles B. Wood.

This international ceremony consisted principally of the reading of passages from significant and representative American writings of a century ago about the U.S. decision to enter the war, including selections from speeches, journalism, literature, poetry, and performance of important music of the time. Heads of State from eight nations read passages reflecting the reaction of their respective nations to the U.S. entry into the war in 1917. “In Sacrifice for Liberty and Peace” also included flyovers by U.S. aircraft and Patrouille de France, as well as military bands, color guards, ceremonial units, and video productions. Students across the nation also participated in this historic event, learning how WWI changed the United States and the world. 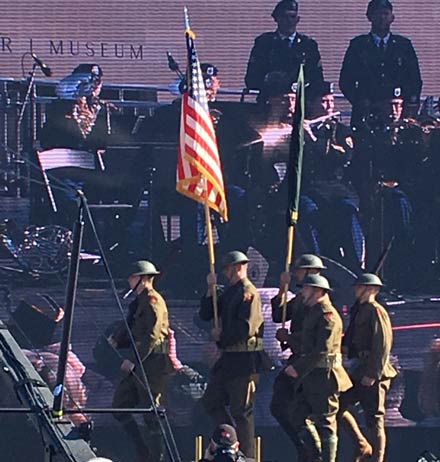 The commemorative ceremony was a multi-media production illustrating America’s step by step decision to enter the war. A creative team led by artistic director Ed Bilous adapted historic images and music of the period into a 90-minute mixture of live performance and film to be broadcast on giant screens at the National WWI Museum and Memorial.

In the afternoon of April 6, a distinguished colloquium will feature notable scholars and former high-ranking diplomats discussing what brought the United States into World War I, and what lessons on ending large conflicts can be learned from the war’s results. Attendance at the colloquium is by invitation only. The colloquium will be be streamed live on the Internet. Click here for more information on watching the colloquium live on April 6.

Students across the nation will be able to participate in this historic event which will be live-streamed, learning how WWI changed the United States and the world through both the performance and available educational materials.