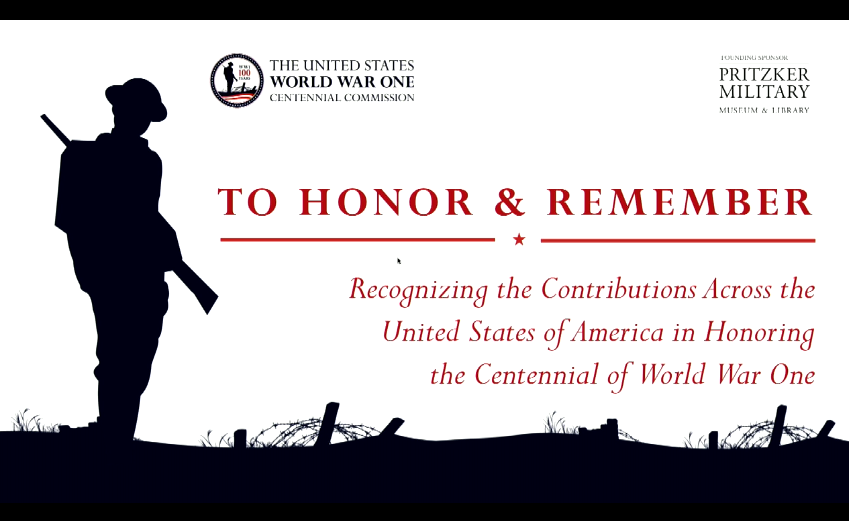 Co-Director Bill Betten, of the California WW1 Centennial Task Force, represented the state at the conference in Chicago. representatives to Chicago, Illinois to attend an event recognizing the contributions these members had made in commemorating the Centennial of World War One. Under overcast, but balmy skies for a Californian, (Chicago even offered up one brief shower for this parched Californian,)  the Commission and Pritzker Military Museum dignitaries gathered to recognize the contributions of states across the country, and to honor the centennial of World War One state organizations. 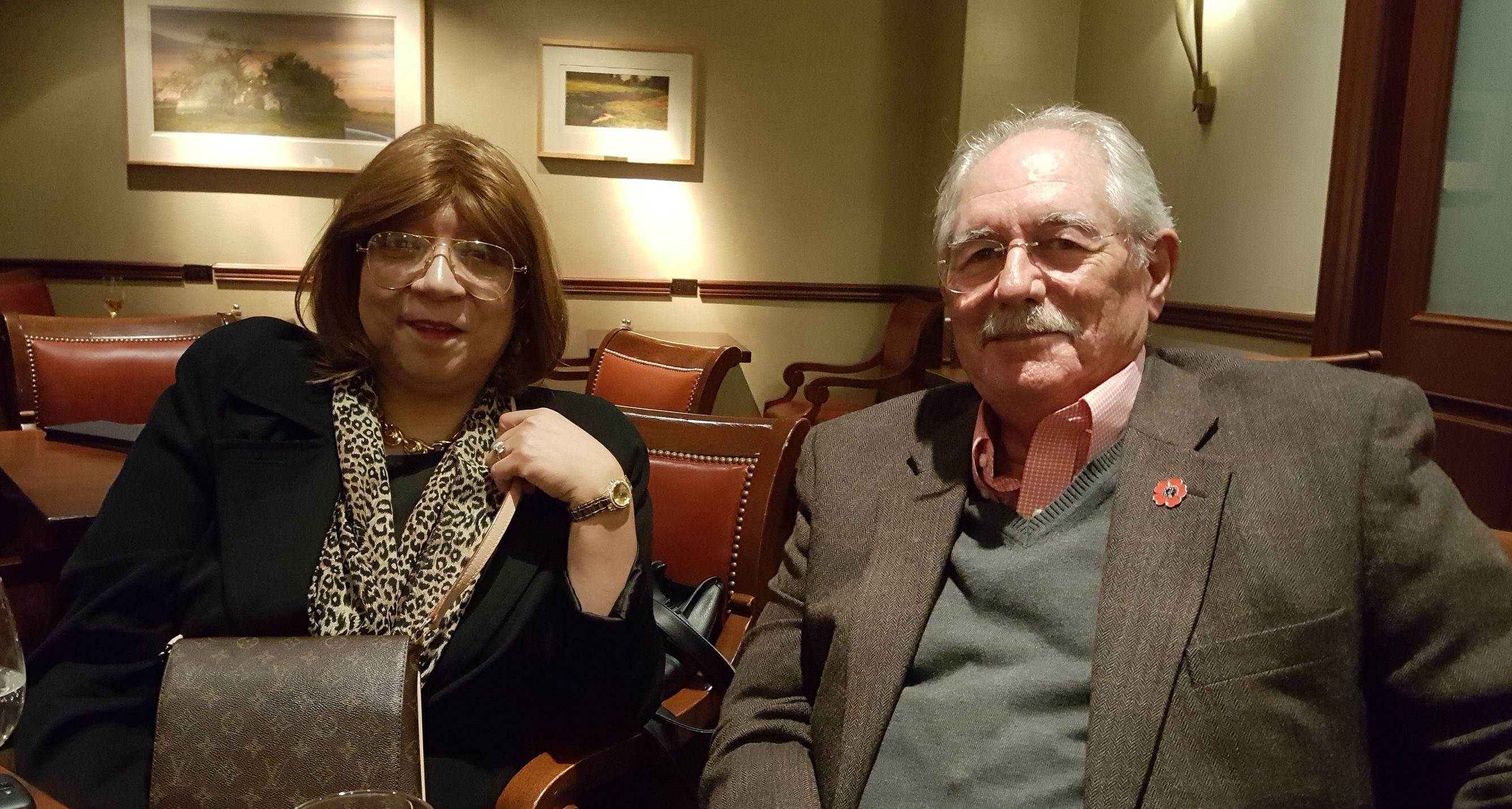 Delegates KC Picard of Idaho and Jim Hodgson of Texas relax on the eve of the conference as our California delegate, Bill Betten, snaps a photo of them in the Union League Club of Chicago.This special occasion began the evening of Sunday September 30, 2018 with a reception of the delegations at the Union League of Chicago, a prominent social club located in the heart of downtown Chicago, whose history stems from the service of Civil War veterans of the Union Army. Here most delegates, commissioners, and staff lodged as guests for the event. The Union League has a long tradition of supporting the men and 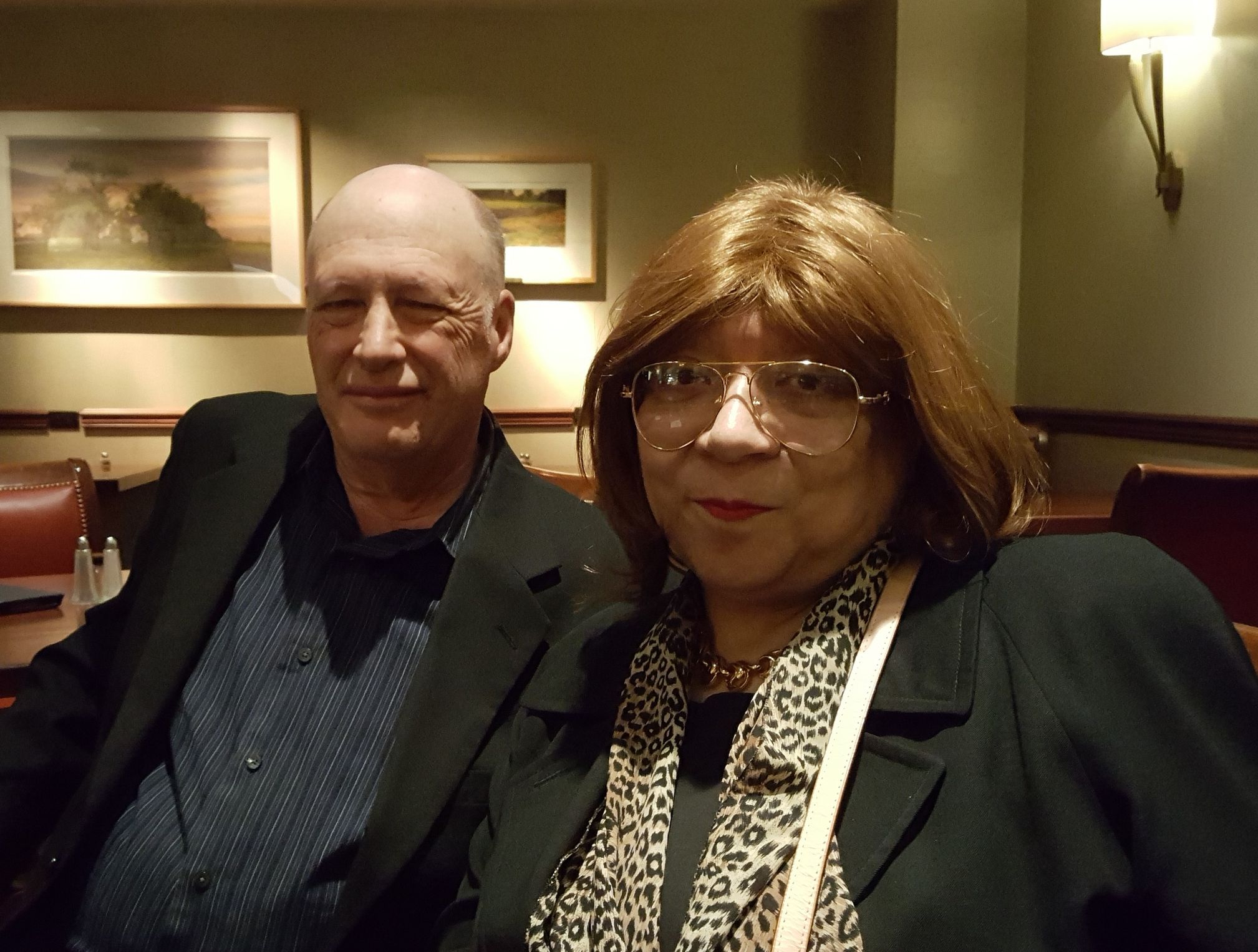 Idaho State Commissioner Frank Krone poses with fellow Idaho Delegate Picard for Bill Betten while chatting about state events over the last few years.women and their families who serve our country putting their lives on the line so we can enjoy the freedoms of America.

At the reception delegations from the different states attending could meet, most for the first time, face-to-face. All appreciated the opportunity to speak to each other, as well as members of the staff of the US World War One Commission. Of special honor was the chance to get acquainted with the US WW1 Centennial Commissioners themselves. Even Commission Chairman Terry Hamby was there to welcome and personally add his exceptional "Kentuckian charm" to the evening.

On the following day, Monday October 1, 2018, attendees were transported across downtown Chicago to the Pritzker Military Museum and Library which hosted the rest of the events. They made sure that a very satisfying continental breakfast was provided.. At the museum, Colonel Jennifer N. Pritzker, IL ARNG (Ret.), herself welcomed the delegates, 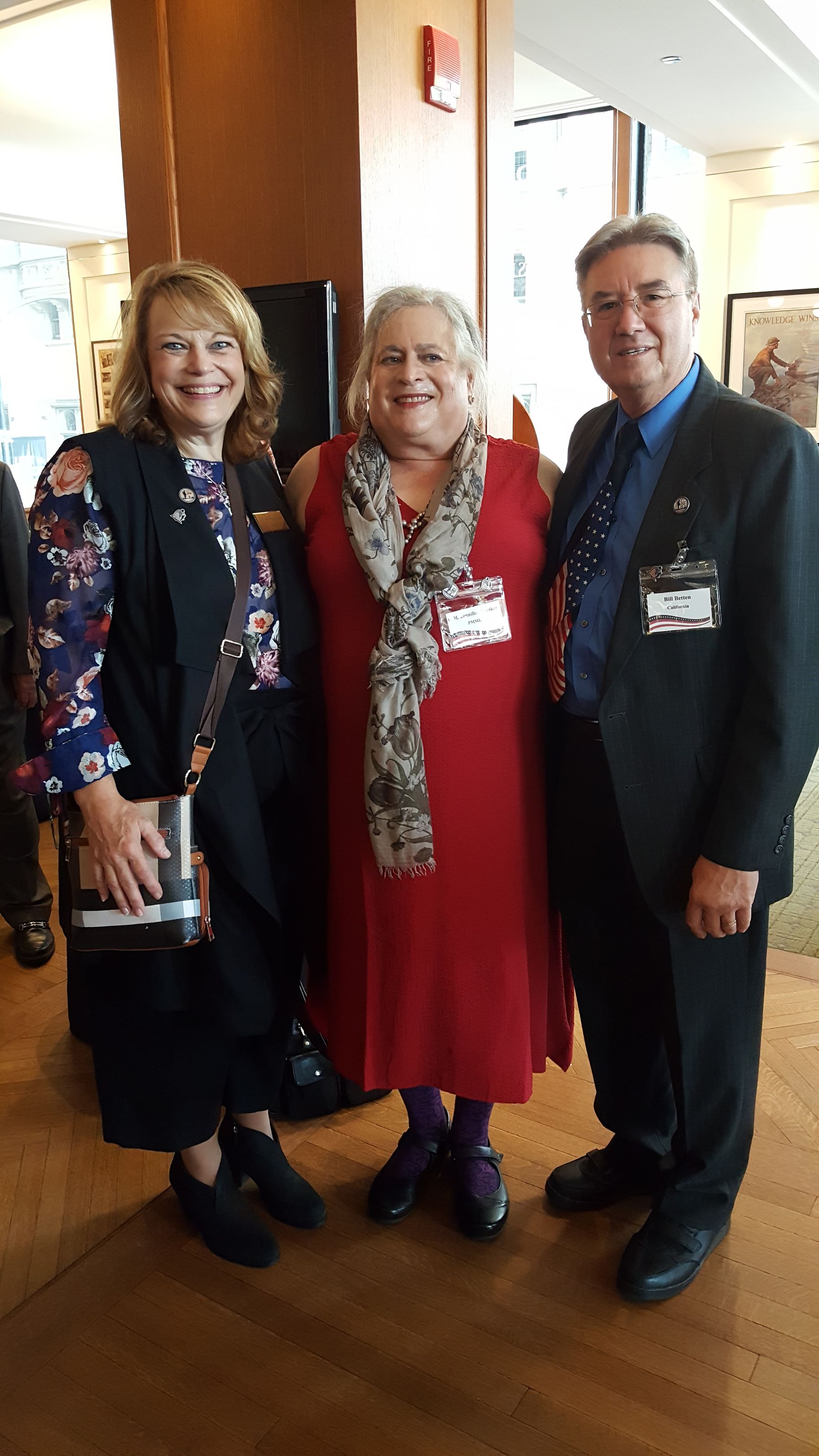 As breakfast was served, California Co-Director Bill Betten (right) posed with host and Pritzker Military Museum and Library founder, Colonel Jennifer N. Pritzker (center,) and the museum's WW1 Centennial Project Manager, Susan Menninga (left.)and in honor of the convening of leadership of World War One commemorative organizations, opened the Museum early to the commissioners and delegates to view the exhibits which included many of her own personal collection, as well as the Lest We Forget: Sailors, Sammies and Doughboys Over There in World War I Exhibition. In a special gesture, unique artifacts from the collection were put on display especially for the occasion. Colonel Pritzker explained she had purchased the historic Monroe Building (built in 1912) with the idea in mind to renovate it, and found the military museum and library. They have assembled a collection of books and related materials on military history, with a particular focus on the concept of the Citizen Soldier in America. Today, building upon that foundation through the generosity of private donors, the Pritzker Military Museum & Library takes up three of the Monroe Building's sixteen floors and has become a non-partisan museum and library that attempts to increase the public understanding of military history and the sacrifices made by the men and women who have served. These include the Pritzker family which holds a long history of military service. 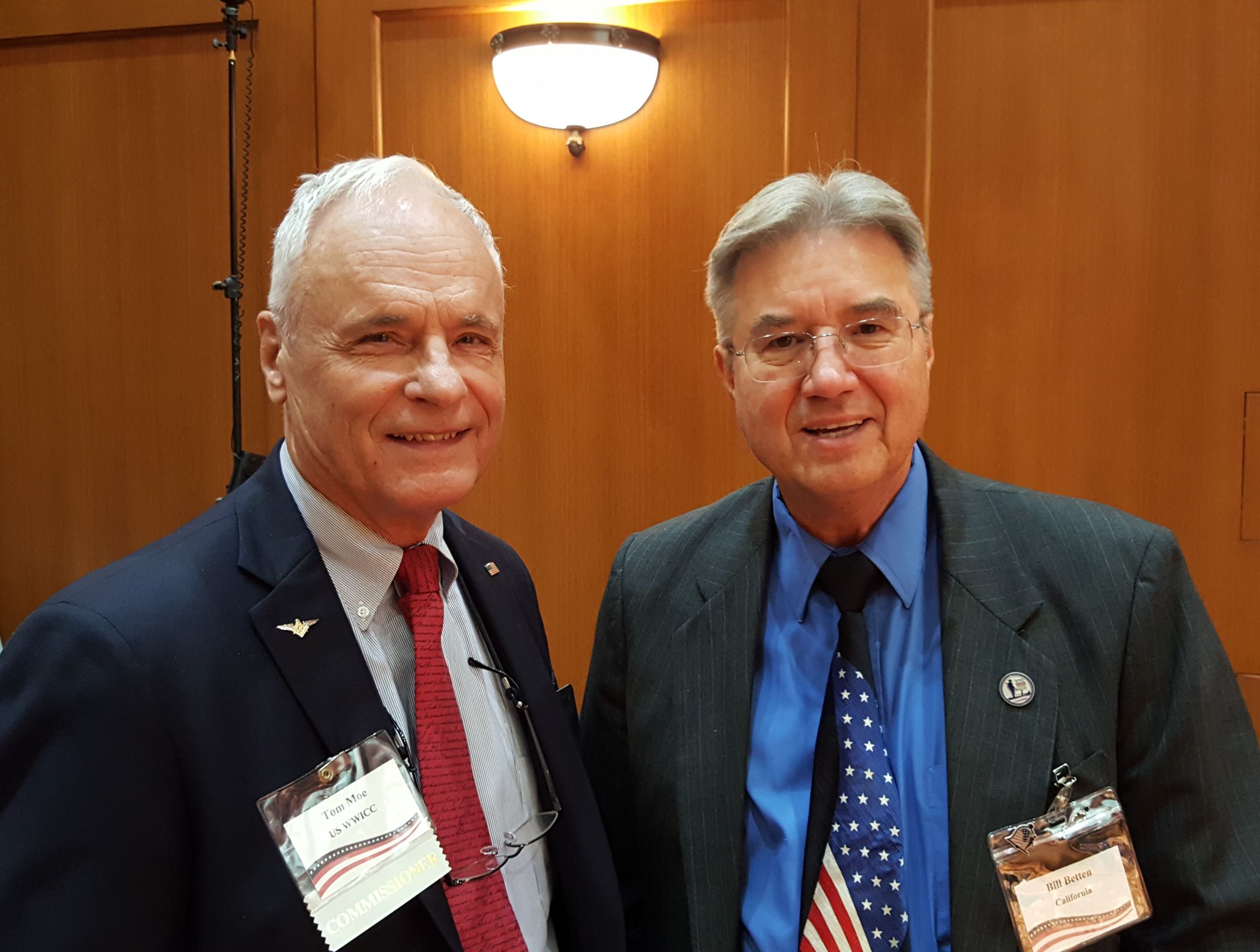 Bill Betten was honored to have met and spent time with Col. Tom Moe, USWW1CC Commissioner. Of great interest to the California delegate was the Vietnam prisoner-of-war veteran's stories and how they related and differed from Bill's own grandfather's stories of being wounded and captured in France in WW1.

As another tribute and special treat, the model of the World War One National Memorial, being planned for the nation's capitol was brought from Washington D.C., and placed on display for all to admire. Museum staff were on hand as well to answer questions, and conduct a private tour of the museum.

A delicious buffet lunch was served on the third floor's Museum Gallery where all enjoyed the elegant selections, and shared in further fellowship of centennial interests. 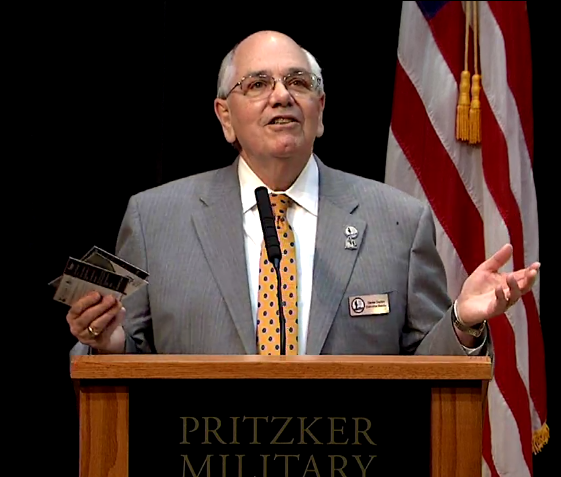 At 12:30 the doors opened to the Pritzker Military Museum and Library's auditorium. It was here, in the two-story lecture hall and broadcast center, that attendees were again welcomed by Dan Dayton, Executive Director on U.S. WW1 Centennial Commission, Col. Pritzker, and Commission Chairman Terry Hamby made opening remarks, and introduced the keynote speaker. 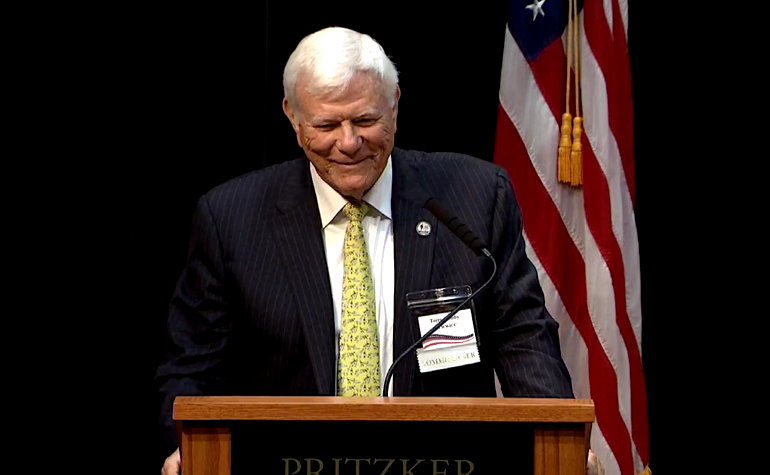 The effervescent and personable Chairman of the USWW1 Centennial Commission, Commissioner Terry Hamby commended, and heartily thanked the state representatives in attendance.

It is without a doubt that the special treat of the day was the opportunity to hear the keynote address of Colonel Gerald York, USA (Ret.) Colonel York is chairman of the Sergeant York Patriotic Foundation, and the grandson of the famous WW1 hero Sergeant Alvin York. It was a pleasure and honor to have the opportunity to hear the colonel speak so personally, and so fondly of his grandfather's experiences, and post-war philanthropy. 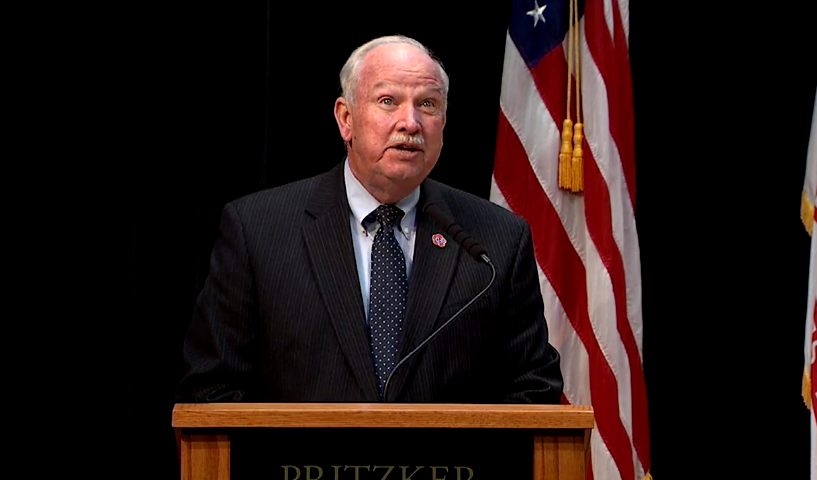 Keynote speaker, Colonel Gerald York, grandson of iconic WW1 hero, Sergeant Alvin York, fascinated his audience with his grandfather's legacy.As an educator himself, Delegate Bill Betten felt that every teacher in America should be made aware of Alvin York's benevolent generosity, and selfless post-war work, as well as his heroism during the war, so as to share this information with their students.

The special guest seating on the lecture hall's Main Level included the commissioners of the United States World War One Centennial Commission, honored delegates of the state commemorating task forces and commissions, as well as staff and officers of the Pritzker Military Museum and Library. 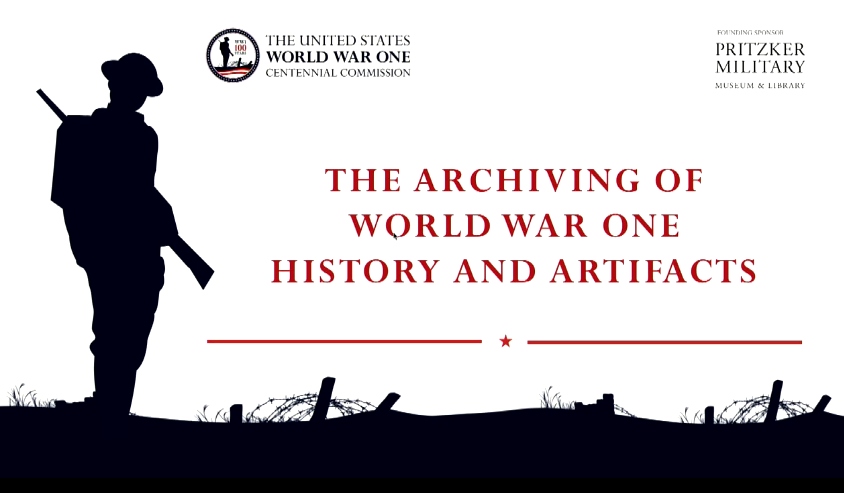 The afternoon's topic for the panel discussion, where ideas were shared on archiving the centennial, and questions from the audience were answered ranging from current goals, to the future of the state and national websites.

A panel discussion, before a live audience and live broadcast followed with questions from the floor asked of the distinguished panelists which included 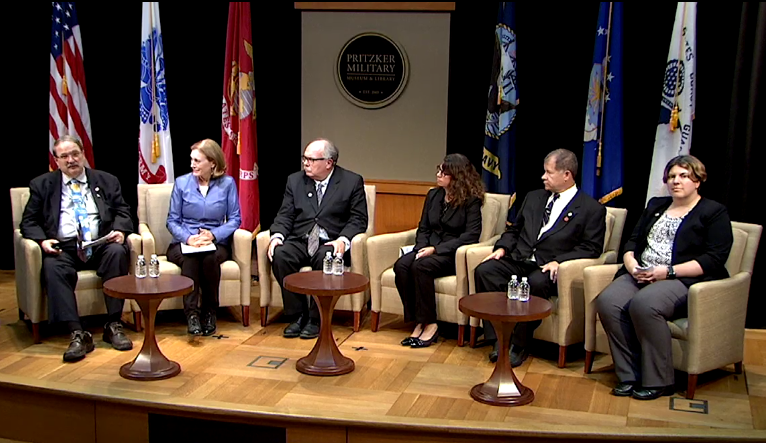 Esteemed speakers populated the afternoon's discussion panel.Commissioner Dr. Libby O'Connell, Andrew Bullen - Information Technology Coordinator for the Illinois Secretary of State, Dory Bower - Archive Specialist with the Government Publications Office, Anthony Fowler - Inter-agency Liaison at the U.S. Department of Education, Stacie Petersen - Registrar for the National World War I Museum and Memorial in Kansas City, and Chris Christopher - Publisher of the World War 1 Centennial Commission's website, who acted as the panel's moderator. Discussion included "next step" information for the future plans of archiving the centennial, and included questions from the floor on the plans to deal with technology issues, and how to stay technologically flexible.

California Co-Director Bill Betten asks a question of the panel.

A brief recess followed where delegates continued to socialize, connect, and transfer ideas, until later in the afternoon. At that time, each of the represented states attending were honored by the United States World War One Centennial Commission with Centennial Commemoration Certificates in thanks for their efforts in commemorating the centennial, 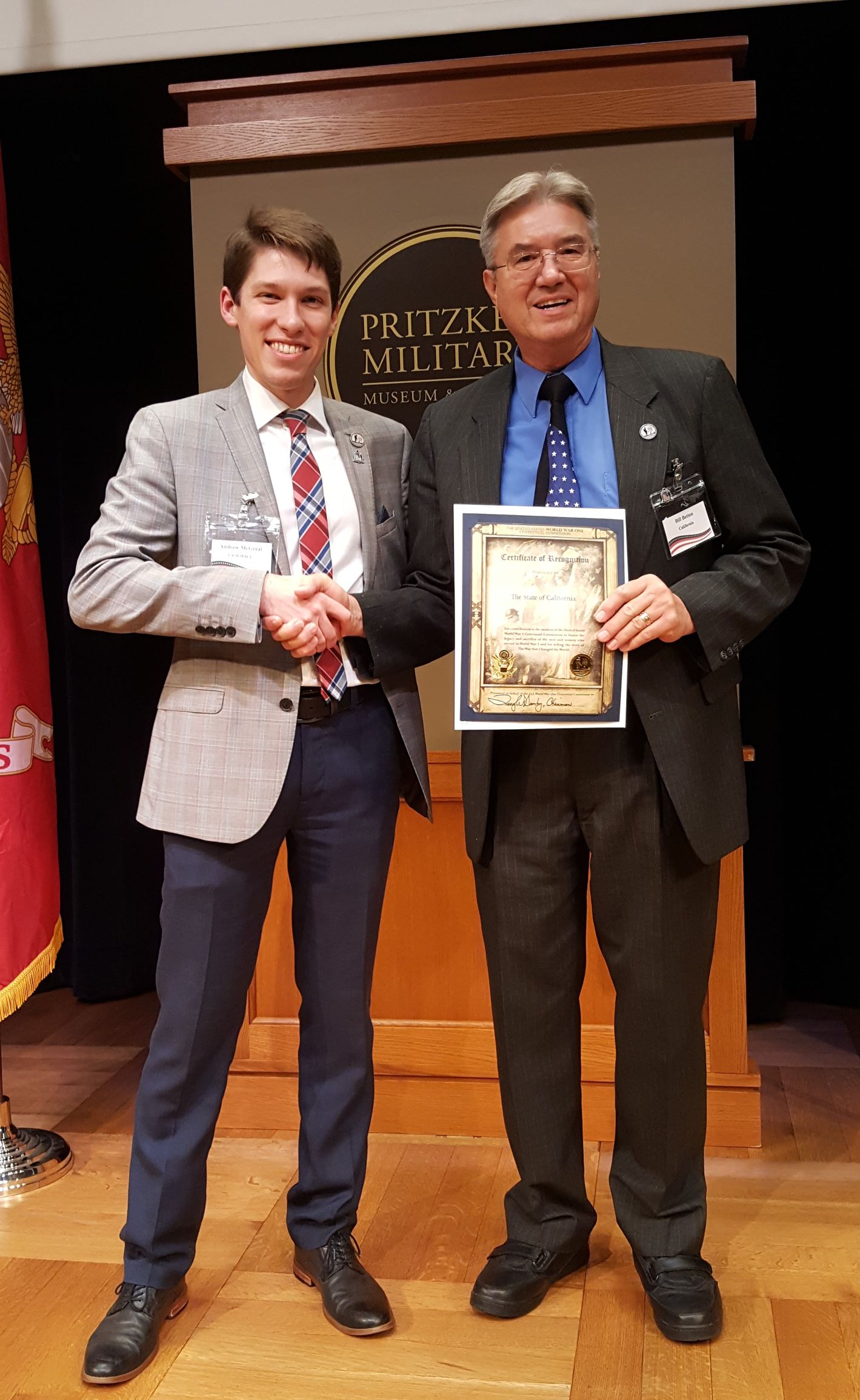 U. S. World War 1 Centennial Commission Project Manager Andrew McGreal thanks California World War One Centennial Task Force Co-Director Bill Betten on the Pritzker stage after the presentations. and their work back home in their own states. Chairman Terry Hamby and Colonel Jennifer Pritzker personally presented and thanked each of the state representatives on the Pritzker Military Museum and Library stage.

The Pritzker Military Military Museum and Library lobby acted as host to a cocktail reception where delegates and commissioners alike spent the next two hours sharing further in individual and group discussions.

On Tuesday, October 2, 2018, all state delegates were invited to attend the U.S. World War One Centennial Commission's Public Meeting held in one of the Pritzker Military Museum and Library's well-equipped meeting rooms. Here everyone heard and witnessed discussion's being made for the future of the Washington National Memorial to WW1, recent reports of Commissioner activities abroad in France, project funding efforts, changes to the National Memorial planned, and more. 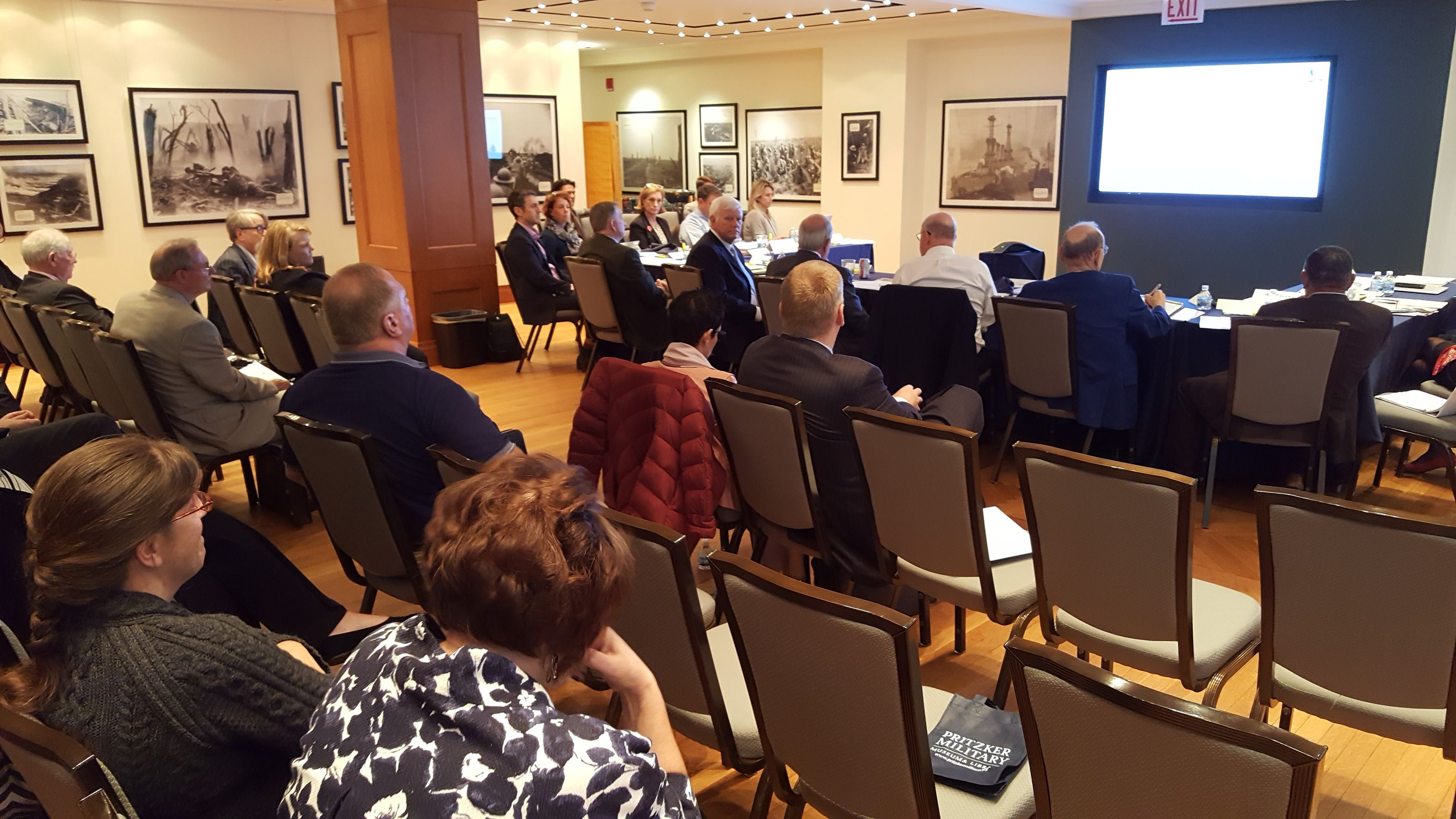 The U.S. World War 1 Centennial Commission meeting on October 2nd at the Pritzker Museum. Commissioner Hamby is turned and addressing the audience in his point.