The American Volunteers of 1914 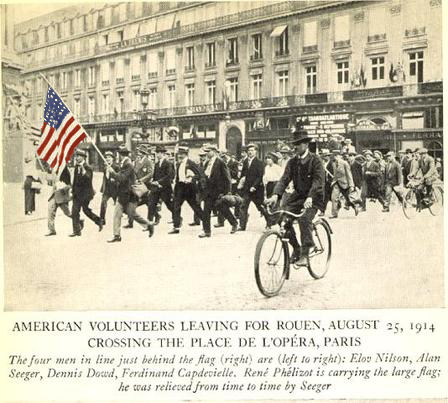 The United States entered World War I in 1917. Americans entered World War I in 1914. As the German army descended on Paris in late August of that year a relatively small, but committed, contingent of Americans volunteered to help defend France in her hour of greatest need. They were a mix of both expatriates, stimulated by the artistic and cultural life of Paris, and more idealistic Americans who felt this was their fight, their chance to help make a stand for civilization and democracy vs. autocracy and the simple, but powerful, idea that “might makes right.”

Among the volunteers were the poet, Alan Seeger; African-American boxer, Bob Scanlon; aspiring writer and connoisseur of the Paris demi-monde, David King; big game hunter, René Phelizot; and the ex-mayor of Canby, Minnesota, John Bowe. The dozens of Americans that volunteered in 1914 represented a cross-section of American society at the time: socio-economically, racially, geographically, and even in terms of age (from college students to men in their forties). Whether they were blue bloods with Ivy League pedigrees, or ordinary seaman working their way across the Atlantic on cattle boats, they recognized something that would take their countrymen nearly three years to realize – that Kaiser Wilhelm II’s Germany represented a threat to the liberal values of democratic societies the world over. The United States, as the world’s largest democracy at that time, could not stand down indefinitely. Seeger and his comrades hoped that by their example they could influence public opinion back home to support intervention. President Woodrow Wilson stood on firm historical ground in opposing this, continuing an unbroken tradition of American non-intervention in European affairs that could be traced back to George Washington’s Farewell Address in 1796. However, over time, incrementally, the American volunteers began to have an effect.

Initially the Americans that wanted to join the French army had to enlist in the Foreign Legion. This elite unit already possessed a dark mystique before taking in the Americans (and volunteers from many other lands motivated by the same ideals) in those first months of the war. All one had to do was pledge to go and fight wherever France needed, and follow orders. Importantly one did not have to renounce one’s citizenship. These Americans loved France, but they were patriotic and proud of being citizens of a sister republic on the other side of the Atlantic. The first contingent to depart for their training held aloft the star bangled banner as they marched across Paris to the Gare St.-Lazare. This flag is now displayed in the Musée de l'Armée in Les Invalides in Paris. The American volunteers of 1914 would serve in some of the bloodiest fighting of the war in Artois and Champagne in 1915; and at Verdun and the Somme in 1916. Alan Seeger documented it all in verse. His poems, perhaps more than any other document, stand as a testament to those who sacrificed in another land to show the way for those that would follow.

Perhaps the most famous form that the Americans’ volunteering spirit took was in the formation of the Lafayette Escadrille. This all-American squadron (albeit with French commanding officers) was part pursuit squadron and part flying publicity stunt. The French government was all too aware of the value of Americans flying for France. There was still a romantic attachment to aviation, and this was exploited to cultivate public opinion in the U.S. On the other hand, it was deadly in the skies over the Western Front, and this would take its toll. Of the seven original American pilots in the escadrille, four of them were volunteers of 1914: southern gentleman and advertising executive, Kiffin Rockwell: aspiring painter; Victor Chapman: Yale dropout, playboy and pre-war seaplane pilot, William Thaw; and the mysterious Bert Hall, who claimed to have been many places. Later three more of the volunteers of 1914 would fly with the Lafayette Escadrille. However, all seven of these pilots initially served in the front lines, on the ground, in the trenches. They asked for no special consideration. 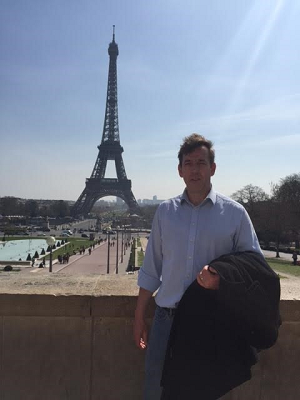 David Hanna teaches history at Stuyvesant High School in New York. He is a member of the American Historical Association and has been a featured speaker at the Smithsonian’s National Portrait Gallery in Washington and the Rhinebeck Aerodrome Museum in New York.

His second book, Rendezvous with Death, recounts the story of the American volunteers of 1914, the Age that produced them, and the war that tested their courage and their ideals.