A long-time resource to those commemorating WW1, Mike Hanlon is well-known for his websites, tours overseas, and general overall knowledge of the subject. He has likewise been a powerful resource as a California WW1 Centennial Task Force Co-Director. Here fellow Co-Director Courtland Jindra interviews Mike and discovers the history behind the (arguably) most active WW1 author and editor on the Internet. 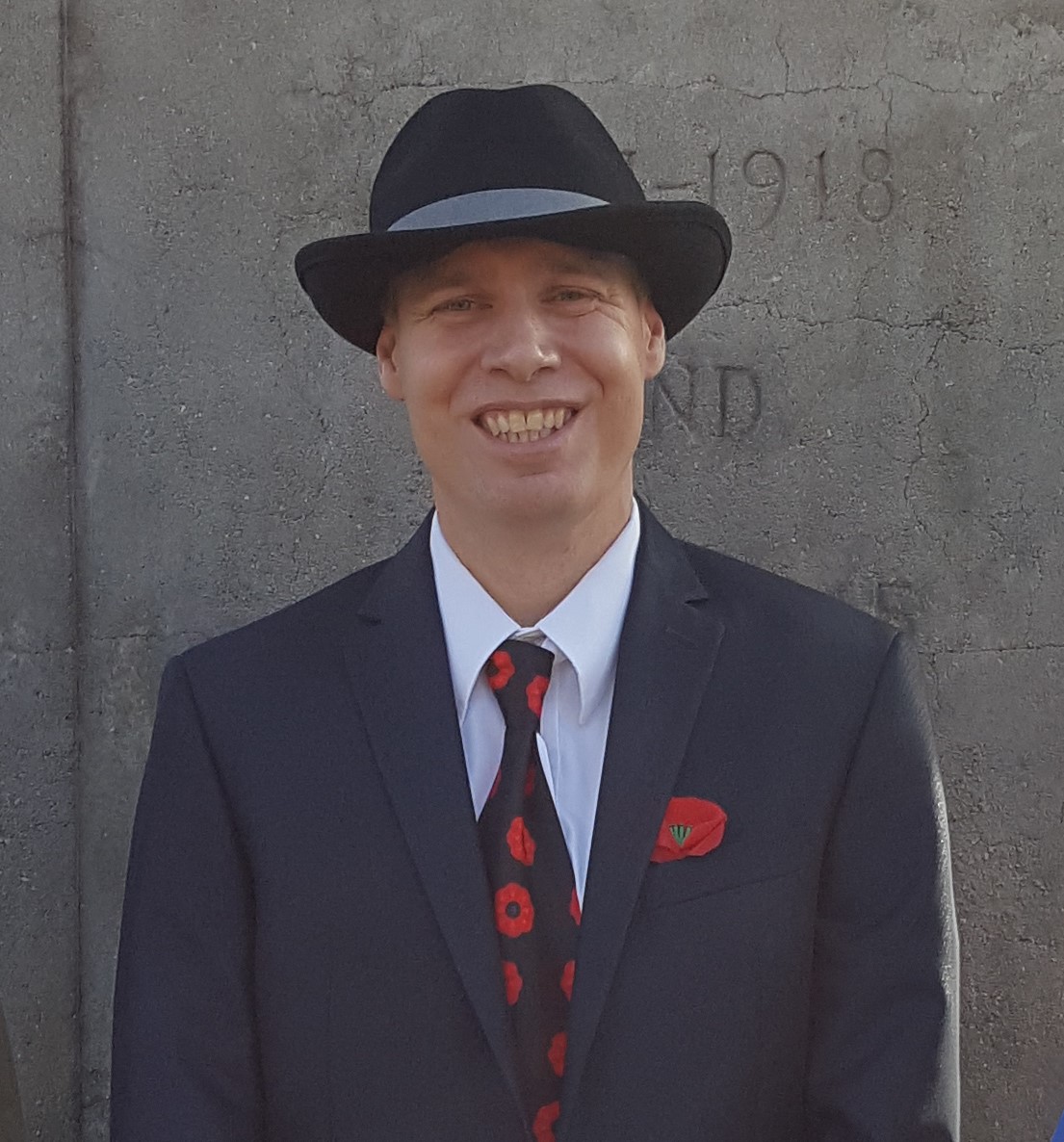 Task Force Co-Director Courtland Jindra: For some background, could you give us a quick synopsis of how you came to be such a WWI expert/what prompted your interest? 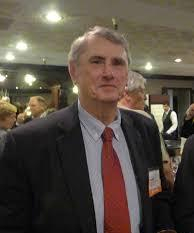 Co-Director Mike Hanlon: During the Vietnam war I spent six years in the Air Force doing a lot of different things. (I have a hard time giving a concise answer to the question, "What did your military service involve?) For the record, my last job was as an Asst. Operations and Special Projects Officer at Offutt, AFB, Nebraska. My post-Air Force career mostly involved managing large projects for corporations and government agencies. Typically, I would be called in on efforts that were having major problems and an outsider with a fresh perspective was needed. The work was rewarding, but always high pressure. Solving everyone else's problems, as you could probably surmise, gets tiresome. In 1987, I took a month off to take stock of things and eventually came to the conclusion I needed another interest, another outlet. Something told me that my organizing skills might be suitable for making documentary films. I signed up for a series of courses with a group in San Francisco called the Bay Area Video Coalition. This lasted about a year and at the end found myself co-directing (with three others) a 15-minute video (of which I am VERY proud) about the Point Isabel Doggie Park. Afterwards, I felt I was ready for the documentary big time.

Meantime, I was conducting a parallel effort to determine what topics I wanted to focus on. A point to keep in mind is that this timeframe was before America discovered Ken Burns, and PBS initiated the American Experience series. Throughout the 80s documentaries on American subjects were almost always indictments of the country, the founding fathers, slavery, the robber barons, etc., etc. At one point when I had finally chosen my topic, I was told by a financing expert that the project lacked funding prospects because it was "frankly, not very politically correct." It was the first time I had heard the "P.C." term used in the sense that it is understood today. Anyway, I decided early that I was going to do positive films about American history, in the spirit of a 1960s CBS dramatization series titled The Great American Adventure. But where to specialize? I felt I needed to start on a topic that everyone else seemed to be overlooking.

My next stop was to the local library where I found a wonderful product of the country's bicentennial celebration, a decade-by-decade statistical abstract of the United States. I selected twenty statistics and calculated the changes for each for every census. I was looking for big, across the board changes by decades. Quickly, two decades jumped off the spread sheet: 1840-50 and 1910-1920. The first involved the rapid expansion of the country and the run up to the Civil War. The second, well you know exactly what was central to that time. I recalled that CBS had done a great series in the 60s on the war, but I couldn't think of anything more recent. That started me on the road I've been following since.

I read several books on the war at a time for many months subsequent. At Stanford's Hoover Institution I discovered their fantastic archives. The wonderful lady in charge of the holdings, the late Agnes Peterson, both guided me through the collections and put me in touch with a bunch of kindred souls at the Great War Society. I was off and running. The video project, which I called Doughboy, came together as I wrote a script and made my first battlefield reconnaissance to the Western Front in the winter of 1990. When I came back I was ready to pitch my project. I received commitments for about 50% of my $180,000 budget, but they were all dependent on matching amounts. Alas, the matching never came. I believe I ran into that "political correctness" brick wall, I mentioned, but it might have been just that I was totally inexperienced. 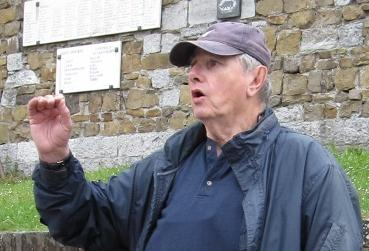 Mike Hanlon speaks while leading a tour overseas.But I had boxes of research notes and floppy disks and piles of annotated books overflowing my condo. What to do with them? First, I decided to write a book. About the Great War, a guidebook to the study of the First World War, that I wrote in hopes of some sales, of course, but also to help organize all that WWI data floating loose in my head. Then I used my travel experience to help organize a battlefield tour for the Great War Society with another member for the Thomas Cook company.

Soon something called the Internet came along and the society needed a website, the technology of which I knew nothing. I went looking for a guru and I found a saint. His name was Mike Iavarone. He had created a WW1 platform called Trenches on the Web. In the 1990s Mike's website was so far ahead of any military history site on the internet the #2 wasn't even in sight. “St. Mike” virtually adopted me, taught me HTML, published a few of my early articles, and then encouraged me to build my own sites. Mike has passed away since then, but I still look after Trenches. Out of all of this churning and a lot of help, I entered the 21st century with high visibility in the small World War I community of interests. Things seem to have grown from there.

Courtland: When I first heard of you there seemed to be so much you were doing and it was overwhelming (websites, videos, magazines, tours, etc.). You are such an endless fountain of information on WWI, I only think it fair to ask for the novice, what of your work on the war is the best place for one to start?

Mike: Over the years, I discovered that there is a tremendous range of things that people find fascinating about the Great War. In all my outlets, I've tried to be as varied as possible on subject matters. As I've said countless times, I just find the war endlessly interesting. Also, I have found in the information age, most people seem to settle on a preferred method of receiving material. Some like one daily article to read and I accommodate them with my blog Roads to the Great War, which currently has over 2,300 entries. Others prefer a broad mix of articles they scan through and pick out what's of current interest to them. For these readers, I've been publishing a monthly online newsletter since 2002, The St. Mihiel Trip-Wire. Others have an unlimited appetite for material on one broad area. For a while I have offered several websites to accommodate these groups, but now I'm maintaining (and currently modernizing and updating) one, The Doughboy Center — The Story of the American Expeditionary Forces. Last, for twelve years, I published a full-color, highly-illustrated magazine titled Over the Top to present in-depth articles by experts on a single theme to readers. Each product, surprisingly, attracts its own readership. Naturally, I've tried to get subscribers to cross over, but I've consistently been surprised at how little overlap there is between the subscription lists. So considering all of these factors — and to answer your original question — I would recommend the novice WWI researcher check in at my home page, Worldwar1.com, and dive in. They will find something to accommodate their curiosity. 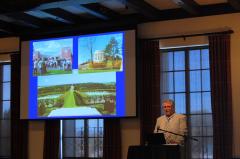 Mike Hanlon gives keynote address at Pershing Family Event at the Presidio.Courtland: Did the centennial years see an increase in your tours and/or your publication readership? Do you believe the public is more interested in learning about that era, or do you believe it will slip back into the mists of history?

Mike: The Centennial years were great for my battlefield tours and —touching on the second point —the readership of my various products has not diminished at all through the first half of 2019. On the broader issue of long-term interest in the war, however, I'm not very optimistic. I've found the overall response to both the Civil War Sesquicentennial and the World War One Centennial by Americans quite underwhelming. Anyone who was around for the 1961–1965 Civil War Centennial will probably understand what I mean. In my lifetime, I've seen a malignant effort to turn the story of our nation's triumphs and tragedies into some sort of vile criminal enterprise. That our educational, cultural, and economic institutions have not only allowed this to happen, but encouraged this, is nothing less than incompetent, suicidal, and criminal. Today, I'm gloomy about the true story of the United States surviving, including the story of her role in the Great War of 1914-1918.

Courtland: Tell us about your own efforts locally over the last few years. The commemoration of the fire that killed Pershing's family was a major early event in the nation (and state)'s commemoration and you pulled that off largely last minute by yourself. Tell us about that and anything else you were proud to help out with in San Francisco or elsewhere. 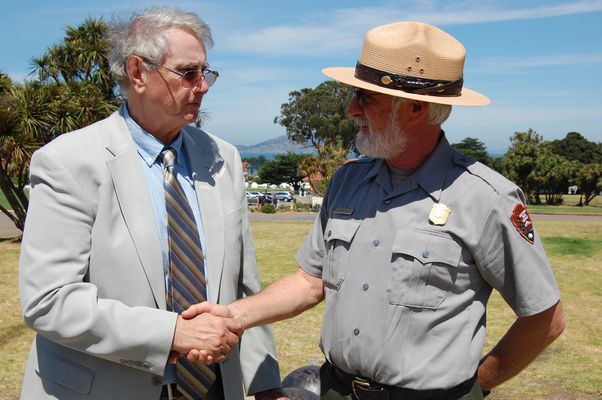 Mike: You probably know, that I've been a big booster and have tried to raise funds for both the restoration of the Lafayette Escadrille Memorial outside Paris and the new National WWI Memorial at Pershing Square. The first project came off perfectly and I'm still optimistically hopeful the national memorial is completed soon. On the other hand, my efforts at the local level turned out to be much less than I had anticipated at the start of the Centennial. The one event you've mentioned, the 2015 Remembrance of the Pershing Family Tragedy at the San Francisco Presidio, which I initiated and helped organize, was a big success, but an eye opener for me. I learned that I really could not sustain my publishing load and my battlefield tours, and also be a fully functional contributor to the staging of commemorative events. I was invited to join with both California's Centennial Task Force and San Francisco's equivalent committee, and I really felt honored by them. I just could not pull my weight with either, though, and I quietly withdrew. I don't think I was much of a loss, in any case. For both my state and hometown, outstanding people came forward and did a fine job of honoring their communities efforts and sacrifices in the war. They are to be congratulated.*

Courtland: Now that the Centennial is drawing to a close how will that effect your work, or will it?

Mike: As long as my readership continues at a healthy level, I plan to continue publishing my blog, Roads to the Great War and newsletter, The St. Mihiel Trip Wire.  Also, I'm in the process of bringing my website, The Doughboy Center, into the 21st century.  It's over twenty-years-old now and a bit forgotten.  However, in its day, it won many awards and was rated either the #1 website, or a highly recommended site about America's WW1 effort by the Library of Congress, the National Archives of both the U.S. and U.K., the Organization of American Historians, the BBC, and Yale University.  I want to return it to its onetime position as the best gateway to information on America in the Great War.

* Although, further on in the Centennial, Mike did consent to joining the California WW1 Centennial Task Force’s Managing Board in a limited role. Co-Director Bill Betten said, "Mike's input has often been invaluable.

Too see all of Mike's great websites and blogs click here http://worldwar1.com/.