Company M was sent by train to Camp Kearny near San Diego for training in October of 1917. On the 31st, Company M was broken up and the men were apportioned among Companies E, F, G, and H of the 160th Infantry Regiment, 40th Division of the U.S. Army.

In June of 1918, after completing training for the War, Joseph was selected for the June Automatic Replacement Draft along with about 2,500 other soldiers from the 40th Division (the 40th Division headed to Europe about 2 months later and included the infamous “Lost Battalion”). These soldiers were handpicked as direct replacements for combat casualties in Europe. Joseph was assigned to Company 19 of the JARD and rode a train from Camp Kearny to Camp Merritt, N.J. (near Cresskill), arriving on June 20. On June 27th, Joseph and his Company marched to Alpine Landing on the Hudson River, took a ferry to Hoboken, and boarded the SS Nestor, which then departed early on the morning of June 28. NOTE: one way we know that this is our Joseph (my dad’s Uncle Joe) is that Nellie Hefferman was listed as his sister and emergency contact on the shipping manifest for the SS Nestor. He continued to use Nellie Hefferman as his emergency contact on all of his foreign travel.

On July 8, the convoy was attacked by German U-Boats, but the U.S. Navy escorts sunk the U-Boats with no damage or casualties to the Allies’ convoy. The convoy landed in Liverpool, England on July 10, where Joseph and the JARD replacements spent the night at Camp Knotty Ash (now Springfield Park in Liverpool). The next morning, they traveled by train to Camp Woodley at Romsey, England. On July 14 Joseph and his companions traveled to Southampton, embarked on a boat and crossed the English Channel at night, landing in Le Havre on the 15th.

From Le Havre, the JARD replacements ended up at the replacement depot in Saint Aignan, France, where each was assigned as a replacement to various regiments. Joseph was assigned to Company L of the 26th Infantry, 1st Division. The 26th had just come out of the Battle of Soissons, where the regiment had distinguished itself in the first American battle victory of the War, but had taken an enormous number of casualties. The regiment was resting at Bois L’Eveque.

The 26th spent the month of August in defensive positions holding the line near Pont-a-Mousson, mostly recuperating, but absorbing the over 1500 replacements, including Joseph. Towards the end of August, they were relieved and transferred to a training area to prepare for the reduction of the St. Mihiel Salient.

On September 11, Joseph and the 3rd battalion of the 26th moved into position on the far right of the American line at Seicheprey. At 5:00am on the 12th the attack against the Germans at St. Mihiel began after a 4-hour long artillery barrage. Over the next 3 days and over very difficult terrain the 26th, along with the rest of 1st Division, completely pinched off the German position, which had been held for 4 years. This was Joseph’s first combat action of the War.

The 26th spent several days in the vicinity of Neuville, then went on to Bulainville for several days of training, though the regiment stayed in reserve until taking up positions near Cheppy. For several days, they underwent heavy shelling by German artillery. Joseph and 3rd battalion were dug in on a hillside just north of a village called Very. Chow was brought in once a day, otherwise the men stayed hunkered down in their foxholes.

At 5:50am on October 4, the 26th, along with the 1st Division and two other American divisions, jumped off the line to attack, despite darkness and thick fog. This attack was part of the Meuse-Argonne Offensive, the Battle of Argonne Forest. Over the next 7 days the 26th overran the Germans, achieving all their objectives, in sometimes hand-to-hand fighting, but suffering its heaviest casualties of the War. The regiment went into the attack with 3300 men and 84 officers. It came out 11 days later with 1600 men and 41 officers.

After a few weeks of rest, relaxation, and absorbing replacements, the 26th began training again. On November 2, it took up positions in support of the 9th Division, which moved up for a couple of days, advancing against the Germans. On the morning of November 5, the 26th attacked and achieved its objectives, pushing the Germans out of the towns of Mouzon and Villamontry, along the west bank of the Meuse River.

Late in the afternoon on the 6th, the 26th received orders for a night march to Sedan. At 7:00am the next morning, the regiment, led by 3rd battalion, dislodged the Germans from Omicourt. They proceeded to flank Sedan. Within the next few days the War was over.

The 26th marched to Verdun after being informed of the Armistice on the 11th. Eventually the regiment traveled through Luxembourg and had the honor of being the first Americans on German soil, eventually ending up doing occupational duty at Coblenz.

On July 17, 1919, Joseph left Brest, France, on the SS Martha Washington. He had been transferred from the 26th to the 101st Military Police Regiment for his occupation duty after the War. He arrived at Hoboken Port on the 27th, and proceeded to Camp Merritt. He then was assigned back to Presidio, San Francisco. In August 12, 1919, he was admitted to the base hospital with Keratitis, ulcerative, of the left eye. He was discharged from the Army on August 20, 1919.

But that is not all the story for Joseph. In 1920, he rejoined the Army in New Orleans. In March of 1920 he was part of a large group of American soldiers who were sent to the Panama Canal Zone for security on the SS Santa Leonora. Joseph spent two and ½ years at the Cristobal Canal Zone, returning in October 1922 on the SS St. Mihiel (ironically named for the battle location where he fought in the War). He was finally discharged from Army.

Joseph returned to California and there is evidence he worked for Bechtel Construction at sites in California, Oregon, and Washington. In 1946, he contracted pulmonary tuberculosis and died at the Santa Anita Racetrack, where he was working as a horse groomer. As far as we know, Joseph never married or had children. He is buried at the Los Angeles National Cemetery as a WW1 veteran. 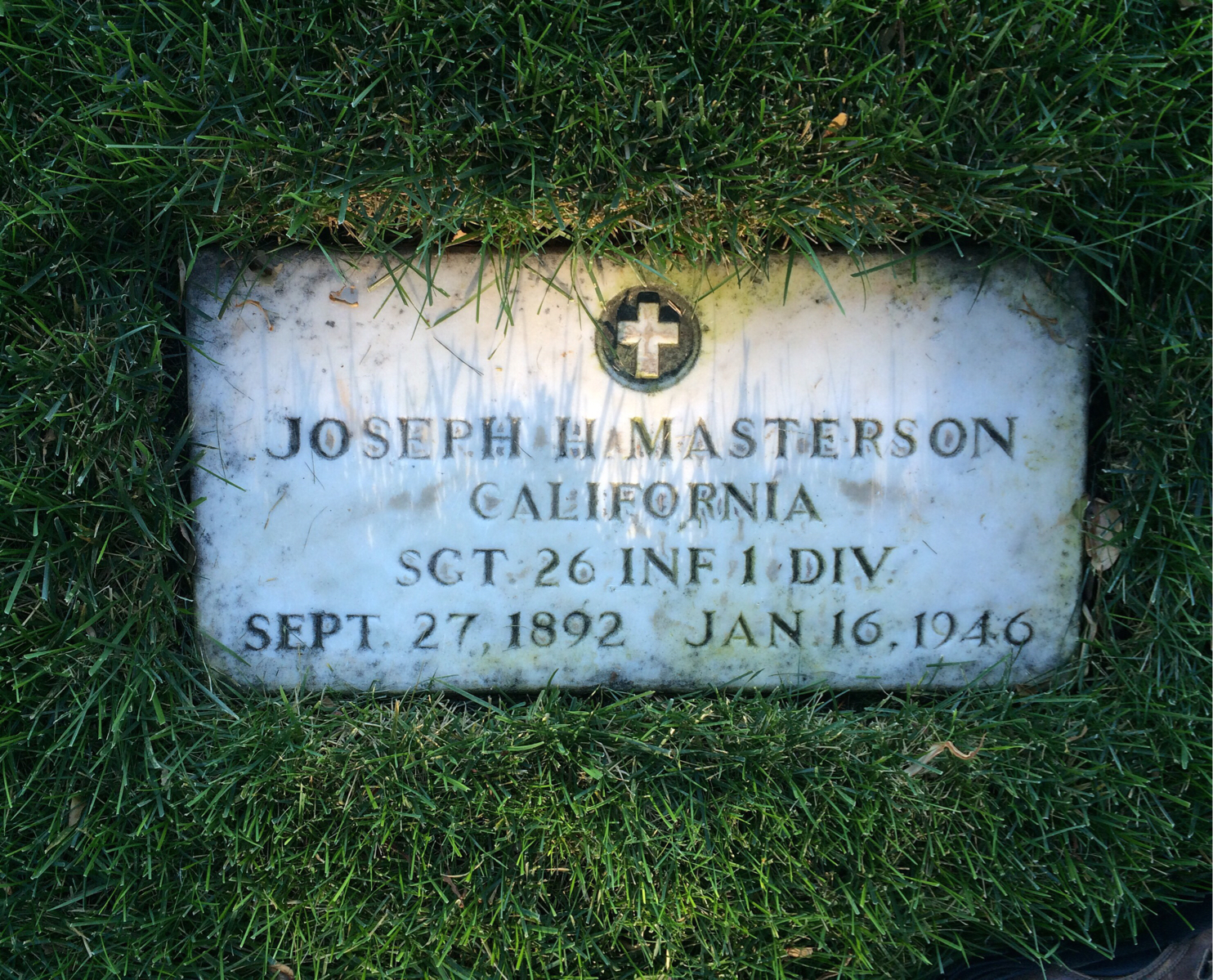