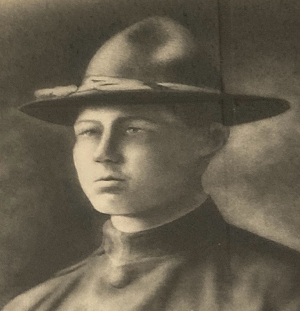 Arthur E Winslow was born around 1895. Arthur Winslow served in World War 1 with the United States Army. The enlistment was in 1917 and the service was completed in 1918.

Arthur Winslow enlisted on June 6, 1917, he was the "First to Enlist" and has an American Legion Hall named after him, (American Legion Post #1 Rockland Maine).

After enlistment he was transferred to Augusta June 8, 1917 Company F 2nd Infantry, Maine National Guard. He sailed for overseas in the latter part of September 1917.

On November 11, 1927 "Armistice Day" The American Legion held services to honor the first two soldiers from Rockland that paid the supreme sacrifice, they named a block of main street in downtown Rockland "Winslow Holbrook Square" Lt Albert D Holbrook was born in Rockland Maine on January 26, 1896. Lt Holbrook was mortally wounded on June 6, 1918 during the battle of Belleau Wood, from which he died on June 19, 1918 at Fismes, France. He is buried in the Oise - Aisne American Cemetery, near Fere - en - Tardenois, France.

My grandfather, (on my mom’s side) Earl Dolham also served in WW1 and survived, he passed in 1965 just before I was born.

Since World War I, there has been a tradition of service in my family. My uncle Robert (on my mom’s side) served in the United States Army during WW2 he also survived the war; he passed away in Maine in 2015.

My father, Alvin Maynard Winslow, served in the United States Navy during WW2 in the Pacific Theatre. He left the service after the war and passed in 1998.

My oldest brother Alvin Winslow, Junior served in the United States Navy during Vietnam and was a commissioned officer, reaching the rank of Lieutenant before leaving the service and joining the Merchant Marine.