Pershing Park in Washington D.C. is home to a statue of World War I General John J. Pershing, although what many people are not aware of is that the Park has recently gained some new residents: Pokémon. 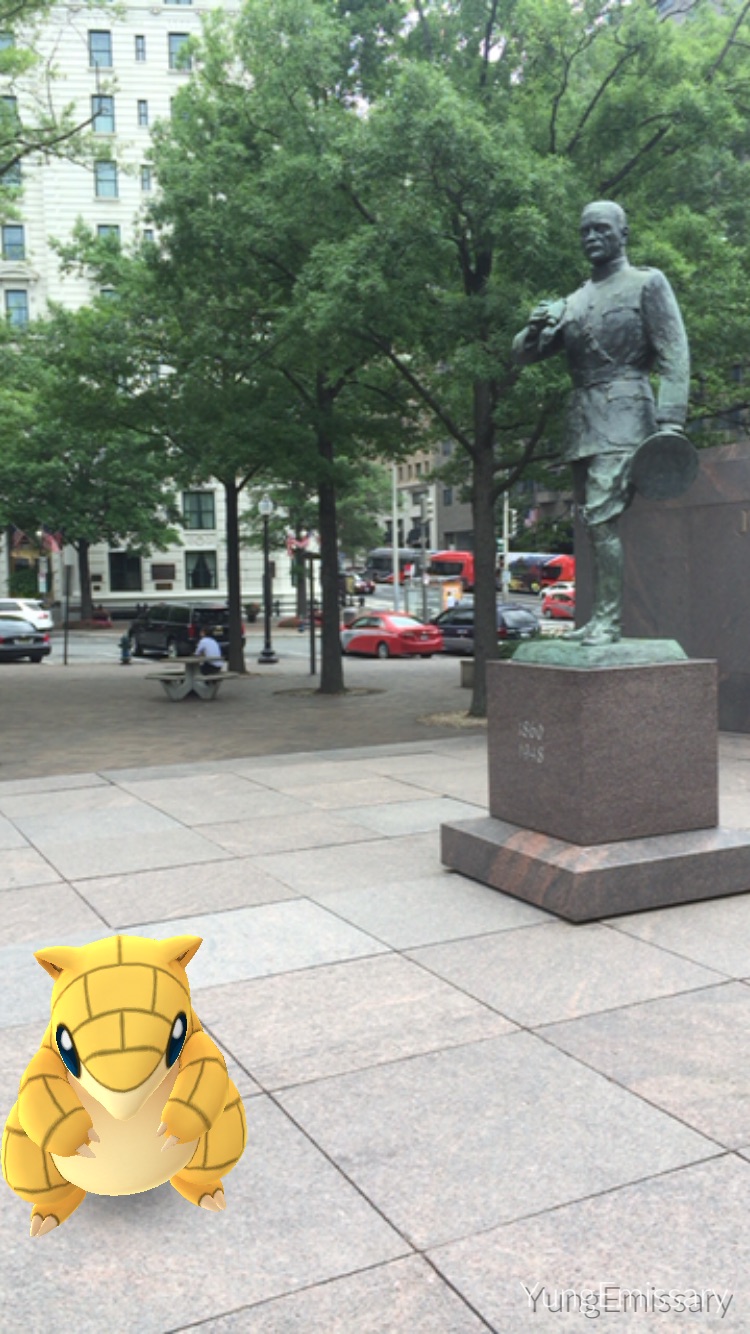 At Pershing Park we were able to catch this Pokémon, known as a Sandshrew.On July 6th, video game developer Niantic released Pokémon Go, an augmented reality app that gives Pokémon fans a chance that they have dreamed about for the last twenty years: the ability to catch Pokémon in real life. This Android and iOS app has taken the world by storm over the last few days, and even became the most-downloaded app in the world during the three days following its release. The game is especially popular in urban areas, as the placement of Pokémon is closely tied to pre-established locations where people can find them, such as parks or even national landmarks. 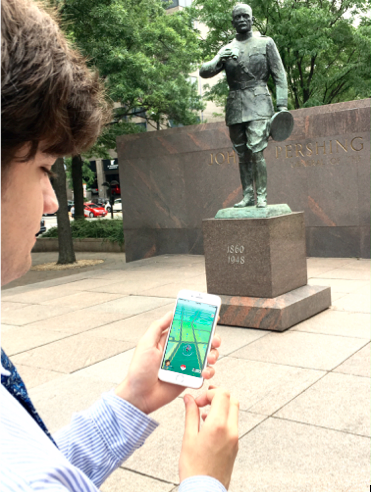 The game itself is an ingenious concept in that it allows users to mix the virtual world of Pokémon with reality. Players who download the app can travel the real world in order to find Pokémon, making this game very different from conventional video games. At certain predetermined locations, known as “Pokéstops,” players can attract Pokémon and attempt to capture them. Pokémon will appear on players’ smartphone screens, making it look as if the Pokémon were actually standing in front of them. Pokéstops are often located at landmarks in communities, such as parks or churches. In major cities, such as Washington D.C., national landmarks can also serve as Pokéstops or Gyms, which allow users to collect or battle Pokémon. For instance, both the White House and the Pentagon are gyms.

A few lucky interns had the recent opportunity to visit Pershing Park in Washington, D.C. to see what it held for the Pokémon Go app. We soon discovered that Pershing Park hosts the “John J. Pershing” and “The Bald Eagle” Pokéstops. Here, users can place down lures to attract Pokémon and catch them. Lures are public and can be seen by anyone who plays the game, so within minutes of placing a lure at John J. Pershing, three people approached us asking about the game at 10:00am on a Wednesday. According to fellow players, Pershing Park is actually an excellent Pokéstop for the aspiring Pokémon master.

Pershing Park will be the future location of the National World War I Memorial in Washington D.C. However, many interns at the Commission who are avid fans of the app are pleased to see that in addition to General Pershing, the site also hosts esteemed visitors such as Charmander or Squirtle.

It is also important to remember that while Pershing Park is meant to be enjoyed by the community, it is also a commemoration to a courageous general. Pokémon Go is fun, but it is vital that players be respectful in solemn places. This is why playing in places like the Vietnam Memorial or similar national landmarks is heavily discouraged by the National Park Service. However, while most memorials are built for reverent commemoration, Pershing Park was built both to honor General Pershing and provide a fun environment for the community. There is even an old ice-skating rink built into the park itself. The location will take on a more formal tone once the National World War I Memorial is constructed in Washington DC, but for now, have a Pokéball.