Rebecca and Charles: A testimony from beyond the Atlantic

My mother Rebecca Goethe DeVries wrote a letter to the Nevers, France newspaper, La Montagne, in 1968 on the occasion of the 50th anniversary of the Armistice of World War I. I find it poignant that here I am writing about the war and my parents fifty years later. I remember my mother’s pleasure in having her letter published. It pleases me to honor my mother and her beloved village in this way. 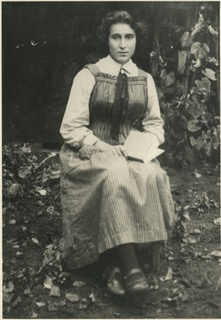 Rebecca Goethe DeVriesRebecca was 12 when the war began and 16 when the Americans came to her village. Her memories of this time were keen as evident in her writings in Vignettes de Moiry which tell of life in Moiry in the early part of the 20th century leading up to the war.

In her letter to La Montagne in 1968 Rebecca writes of her memories of the war, of how badly things were going for the French, her amazement with seeing the first American soldiers who came to build the camp, the arrival of the wounded in the trains that passed behind her home, of giving water to the wounded, the tremendous effect on the village of the American “invasion”, the warm relations which developed between the soldiers, the nurses, and people of the village, the daily sadness of hearing taps for those who died, her observation of the Annamites, the workers of the camp, her memories of the excitement when the war was over, the emptying of the camps and what was left, things: towels, shirts, socks, brick barracks, etc. and memories. The village was affected by the war but, nevertheless, it reverted back to the quiet life of a rural peasant village. However, for Rebecca life would never be the same. Rebecca wrote:

Wars are all the same... For certain people, they bring unhappiness, misery, mourning. For others, fortunes, and alas, profit and again, for others, a love so strong as to overcome time and distance, the differences of mores and of language, between two beings who could not live without each other. It is for this reason I left my pretty village, my dear country. I have returned there three times since the Armistice of 1918 and I hope to do it one more time.

I believe in my heart that Rebecca has returned again in spirit as the dear village of Saint Parize-le-Châtel and the hamlet Moiry honor the presence of the Americans who arrived there in 1917, and also the story of love that came out of a disastrous war.

In rereading the 1968 letter I was struck by my mother’s prescient words. It is almost as if she has been guiding us all in this marvelous venture of remembrance. In writing about the importance of remembering all those who gave their lives for their country, my mother wrote:

Permit me to offer you this suggestion: Each year in America we celebrate Memorial Day, that is, the Day of Remembrance. I would be happy if someone would put flowers on the little monument, “Aux Amèricains Morts Pour La France, le Droit, et La Liberté.” It would be good, also, if the school children participate, learning by this what has happened in this little corner of France. Someone could also put there a little American flag. A barrier around the monument would protect it. If anyone is interested, I would be happy to contribute to this project.
The politics of a country change: those who were our enemies become our friends, but the individual sacrifice of the soldier never changes, He has given his life. The supreme act demands an act of remembrance. 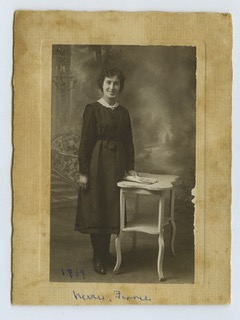 Rebecca Goethe DeVries in 1919During the centennial years of World War I, 2014-2018, the school children of Saint Parize have been researching and will continue to research the lives of soldiers from their village who gave their lives for their country. On the exact centenary of the death of each soldier the children make a presentation about each soldier. The dead are no longer just names etched on a forgotten grave but are real men who lived, played, worked, laughed, loved and died for their country.

Truly, it is as if my mother, Rebecca Goethe DeVries had guided us all in this project. The entire village of Saint Parize-le-Châtel is involved in the Centennial Celebration June 23-26, 2017. My mother’s wishes have been carried out. The little monument to the Americans who died has a place of honor nestled near the American Chateau D’Eau. I am bringing an American flag that has been flown over the United States Capitol. The school children are learning their history. Monsieur Philippe Morizot, the director of the school in Saint Parize, has written, with his students, a play based on the life and times of Rebecca as taken from her writings in Vignettes de Moiry. Some of my grandchildren are involved also. Rebecca’s great grand daughter Lilla Duffy will portray Rebecca as a bride in the play. Cousins Lucas Duffy and Allen Duffy, great grandsons of Rebecca, will also participate in the wedding scene of the play. An American group of around 25 family and friends will watch the play and will be honored to participate in the weekend activities.

How delighted my mother would have been to know that her writings do indeed teach the children of Moiry and Saint Parize-le-Châtel about their local history and about the war.

The steering committee led by Mrs Lisiane Delbet in charge of cultural affairs in Saint-Parize-le-châtel, including Mrs Colette Mayot and Mr Gianni Belli for the Heredit Genealogy Association, Mr Philippe Morizot, School Director, and Mrs Laurianne Moraswski, teacher, with the participation of Mr André Garcia, Mayor and of Mrs Marie France de Riberolles, thus contributed, by their work to the wishes so dear to my mother, which was to transmit to children the duty of memory that they do not forget what happened in their village. 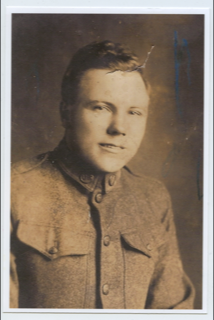 Charles DeVriesCharles DeVries, with the fervor of youth and belief in the Cause of France in the war, left his studies at Hope College in Michigan in April 1917 responding to the call for volunteers in the Army with the American Expeditionary Forces. He joined the U.S. Army May 5,1917. From then until September 19,1918 he was in training as a medical assistant and served in military hospitals in Ohio, Virginia, Georgia, rising in rank from Private to Sergeant in charge of medical wards. His diary tells us of important dates in his military career as well as of meeting Rebecca.

On September 3, 1918 he became a part of Base Hospital 80 and left for France September 19,1918 on the transport ship Agamemnon. Arriving at the Base Hospital in Beaune, France, October 9th, 1918, he attended to the badly wounded arriving from the Front.

Soon the war ended. He was in Beaune for the Armistice November 11, 1918. Charles wrote:

Armistice is signed. War is over. At Beaune, France. Impressed with marching of school children.

He left Beaune January 24, 1919 and arrived at Nevers the morning of January 25th.

Charles’ duties at the Mars Hospital were tending to the wounded, reporting for the newspaper, the Martian, organizing and playing baseball with recovering soldiers. He visited Saint Parize-le-Châtel. He took a hike to Saint Pierre-le-Moutier. The able soldiers did hiking and drilling. The Mars-sur-Allier Camp was a veritable city with all sorts of activities to occupy the recovering soldiers and their caretakers.

Charles time in France may have been brief as the war ended abruptly. However, Charles’ life was changed forever.

With the war over, the wounded were being sent home. Charles, always eager to learn, now had time to study French. My mother would tell the story: Charles walked into Moiry and asked Madame Soupet, Rebecca’s foster mother, if she would teach him French. “Non,”replied Mme Soupet. “I am too busy, but I have a daughter.” And thus began the love story of Charles and Rebecca.

Charles was quickly captivated by Rebecca as evidenced in his diary notes:

Madame Soupet, Rebecca’s foster mother welcomed soldiers into her home as is evident by diary entries: 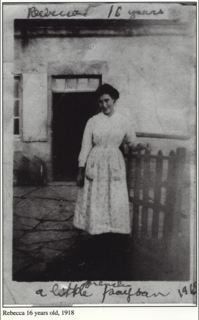 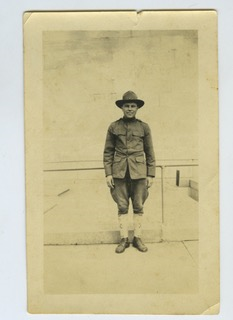 The attraction is evident in letters written as French lessons and in more diary entries:

Charles arrived at Camp Guthrie, Moutoir, April 23rd and was there until he left for home and discharge aboard the SS Santa Theresa. He arrived at the Brooklyn dock on May 24th. On June 1, 1919 he said farewell to the Base 80 boys and was discharged from the Army June 4th, 1919. So, between March 13, 1919 and April 22, 1919, in less than 6 weeks, Charles and Rebecca were in love.

Except for a leave when he went to Paris, daily, Charles came to the home of Monsieur and Madame Soupet and studied French with Rebecca. 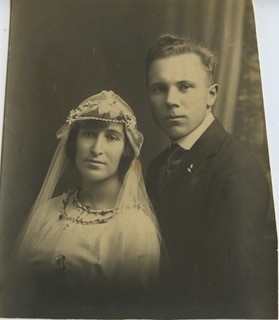 Charles had known Rebecca less than three weeks when he proposed marriage. Rebecca wrote, We had taken a short walk outside the village of Moiry, he having obtained permission of my mother as he was leaving soon for his country and wanted to ask me something important. Rebecca, just sixteen, wrote a charming letter of refusal responding to his carefully annunciated proposal, Voulez-vous être ma femme?

The exchange of letters begun as French lessons continued in Rebecca’s home until Charles left on April 22 for the U.S. The letters continued for three years until Charles returned to marry Rebecca in October of 1921. Charles was 29 and Rebecca was 19.

I have all these letters. They tell a story of two very articulate, intelligent people exploring their relationship and their love. My mother had only the education until the age of thirteen in the school in Moiry. She learned well from her beloved and feared teacher Monsieur Besançon. (See the vignette, Monsieur Besançon in Vignettes de Moiry.) However, it was an excellent education and Rebecca was very intelligent. Had the war not come, the state would have sent her on to school. This did not limit Rebecca. She was passionate about reading and learning and was the intellectual equal of my father. After the war, he resumed his theological studies and became a pastor.

Although my mother deeply loved my father, she never relinquished her love of France. She prefaced her tale of her life, with C’est à Moiry que j’ai appris le philosophie de ma vie. Rebecca longed for her homeland and, I believe, she has indeed come home. 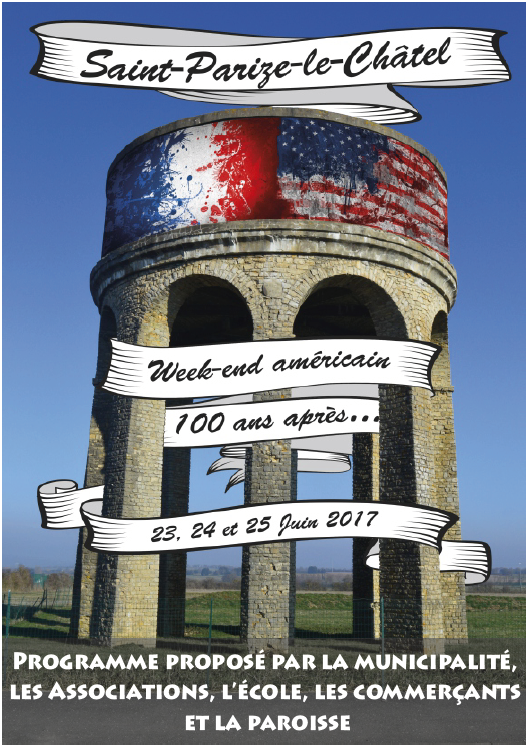 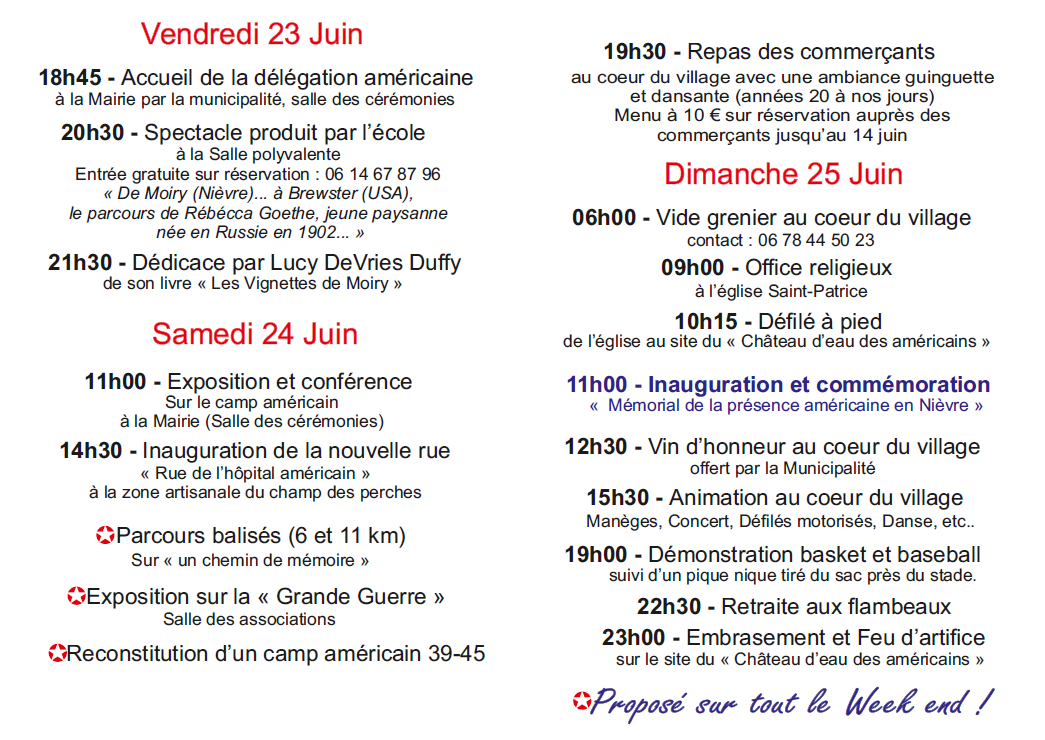