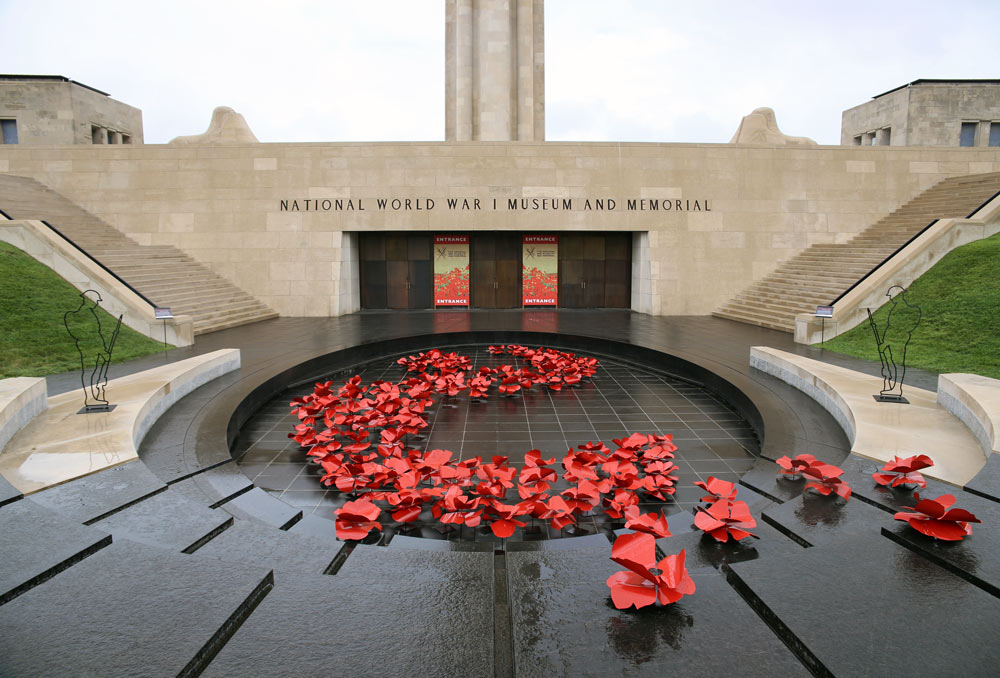 The “Reflections of Hope: Armistice 1918” Art Installation at the National WWI Museum and Memorial in Kansas City, MO.

KANSAS CITY, MO – During the course of World War I, approximately 117,000 American soldiers lost their lives in defense of the United States and its allies.

As the centennial of the Armistice of World War I approaches, the National WWI Museum and Memorial and artist Ada Koch honor those who made the ultimate sacrifice with a moving and powerful art installation. Reflections of Hope: Armistice 1918 features 117 intricate metal poppy sculptures designed by Koch in a symbolic arrangement in the Reflection Pool at the Museum and Memorial. Each poppy represents 1,000 American soldiers killed during the Great War. The installation process will involve more than 50 volunteers recruited by Koch.

Inspired by Lieutenant Colonel John McCrae in his poem, “In Flanders Fields,” Koch’s latest work uses the powerful symbolism of the poppy to commemorate American service men and women who lost their lives.

“My fascination with the poppies has ranged from paintings on canvas, wood, and silk to creating three dimensional flowers with bandages and hand grenades, to now using steel sculptures to create an impact that will draw the community together to recognize the sacrifices of war,” said Koch.

Koch, whose work is featured in corporate and private collections throughout the U.S. and Europe, is an experienced artist and advocate. By being active with several different local arts organizations, she works to make sure artists’ voices are heard. Her studio in the Livestock Exchange building in Kansas City is the focal point for her mixed media painting and sculptures about social issues including war, violence and a renewed emphasis on empathy.

Although the U.S. entered World War I in April of 1917, American troops did not start arriving in large numbers on the Western front until early 1918. In total, approximately 117,000 American lives were lost during the war, with the majority of casualties occurring in a span of about seven months.

“After World War I, the poppy became a symbol of remembrance, hope and resilience,” said Museum and Memorial President and CEO Dr. Matthew Naylor. “Displaying Ada’s art installation in the centennial year of the Armistice serves as an appropriate tribute to the men and women who gave their lives for their country.”

Reflections of Hope: Armistice 1918 is open from Wednesday, Aug. 15 through Sunday, Nov. 11 in the Reflection Pool at the Museum and Memorial. The exhibition is free for the public to enjoy.

The 117 poppies will be available for sale once the installation concludes on Nov. 11. Individuals interested in acquiring a limited edition Armistice Poppy should contact the Museum and Memorial at give@theworldwar.org for more information.