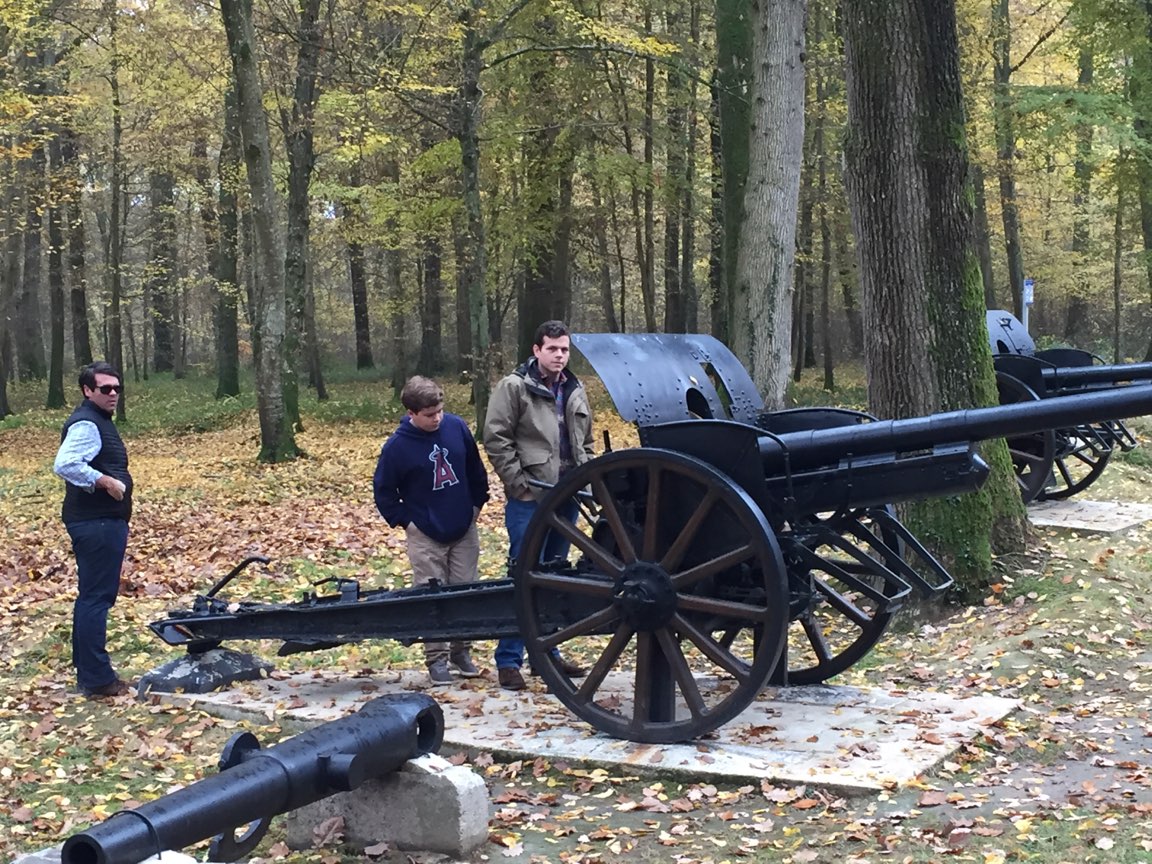 Field cannon at Belleau Wood — Matthew Haske (center) spent the day touring the battlefield and cemetery as well as Chateau-Thierry. 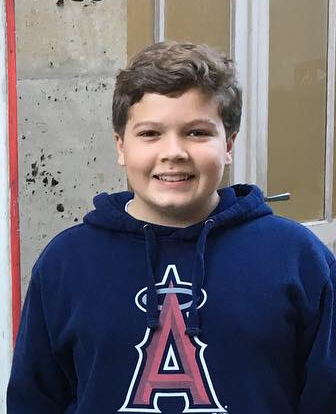 Matthew HaskeWhen 13-year-old Matthew Haske wrote a letter to President Donald Trump about his World War One commemorative trip to France, he never thought that he would be invited to attend the ceremony for the Armistice at Suresnes with his father. He “worked and saved all of his money for two years to make this trip to France” as Trump mentioned in his speech. We asked Matthew about his passion for World War I and his journey to France.

Could you please introduce yourself?

I am a 13-year-old boy who lives in Lynchburg, Virginia. I am in the 8th grade and active in the Boys Scouts and serve as Patrol Leader. I am also active in projects that are service to my community, as an altar server at my Church and play cello in our school orchestra. I play baseball, run cross-country and am an actor in our school plays. I enjoy reading, camping, hiking and traveling.

I am in interested in WWI because I have always had a great interest for American military history and once I noticed the centennial was approaching, decided to learn more. This current focus started two years ago when I read about the end date being 1918 and knew there would be a reason to go to Paris for the centennial. I read many books, visited military sites, spoke to veterans and watched documentaries and other films to prepare for this trip.

The most impressive impression is the switch from old warfare to modern warfare including machine guns, tanks, airplanes and much more.

What drove you to write to President Trump to attend the ceremony for the Armistice at Suresnes? Would you like to share some detail of the letter with us?

I wrote to President Trump to let him know I would be coming to Paris and I knew he would be there also. I wanted him to know that I care about remembering our past. I did not know about the Suresnes event until I received an invitation. Originally I thought there would be a parade in Paris on the anniversary. In my letter to the President, I let him know how much I value our veterans and fallen heroes and that I had saved for this special anniversary trip.

The journey to France was incredible, breathtaking and humbling. I visited serval landmarks such as Eiffel Tower, Mass at Notre Dame and Musee de L’Armee. I attended the 100th Anniversary Ceremony at Suresnes Cemetery and Memorial outside of Paris where I was able to listen to President Trump’s speech and to meet military commanders, generals and the U.S. Ambassador to France. I also visited Normandy and Chatieu-Thierry the following days to visit other war museum cemetery and memorial.

The most fascinating memory is standing in Belleau Wood and seeing the enormity of the battlefield and imagine what took place there.

What did you learn from World War I and your Journey to France?

The entire process, preparing for the trip, traveling and returning to the US has widened my view on the world including our military, world history, European culture, art and the French language. It has made me more grateful for all that I have.

I very much want to return to Belgium and France to complete the WW1 military history tour. I think understanding history is important because it will enlighten us and enrich our understanding as we make choices moving forward.

Wanxing Niu is a Fall 2018 Intern with the U.S. World War One Centennial Commission. 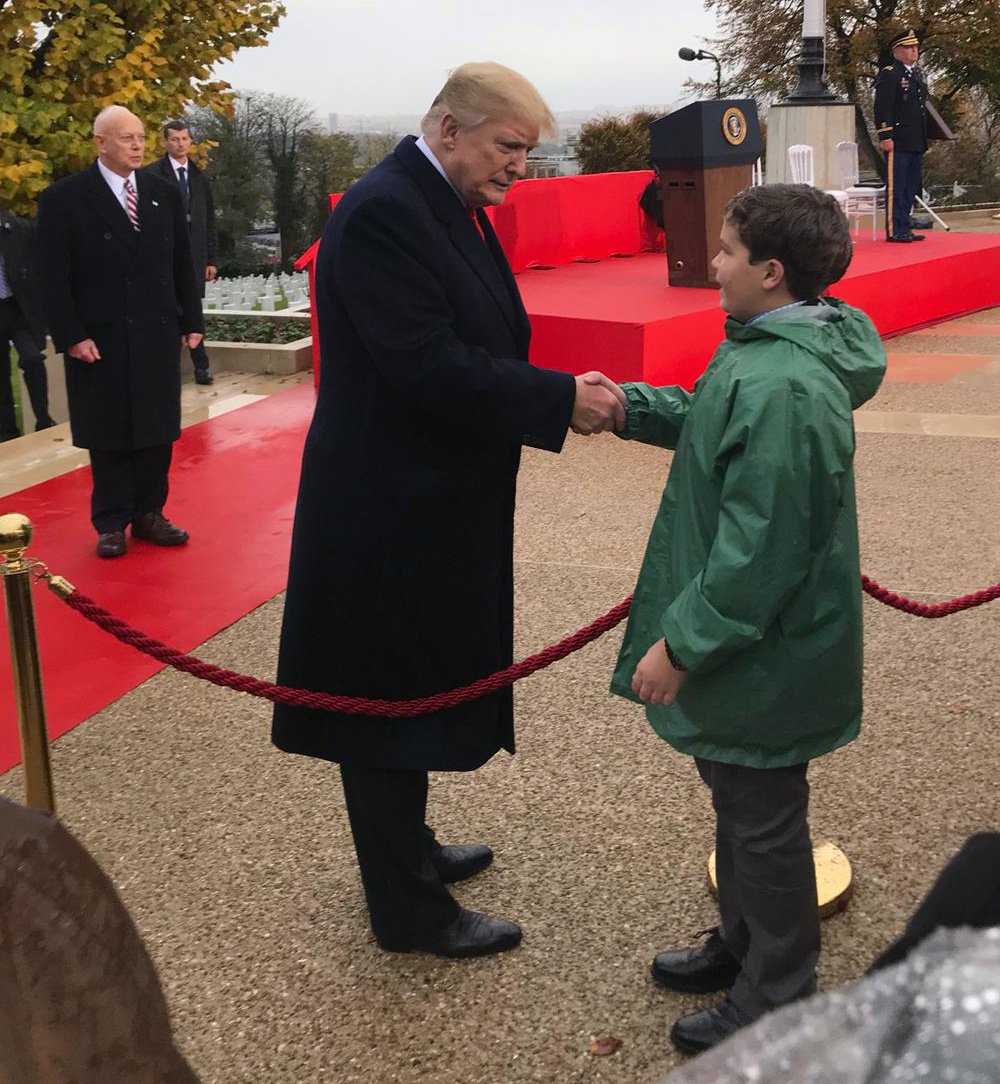 President Trump and Matthew Haske at the Suresnes American Cemetery in France. 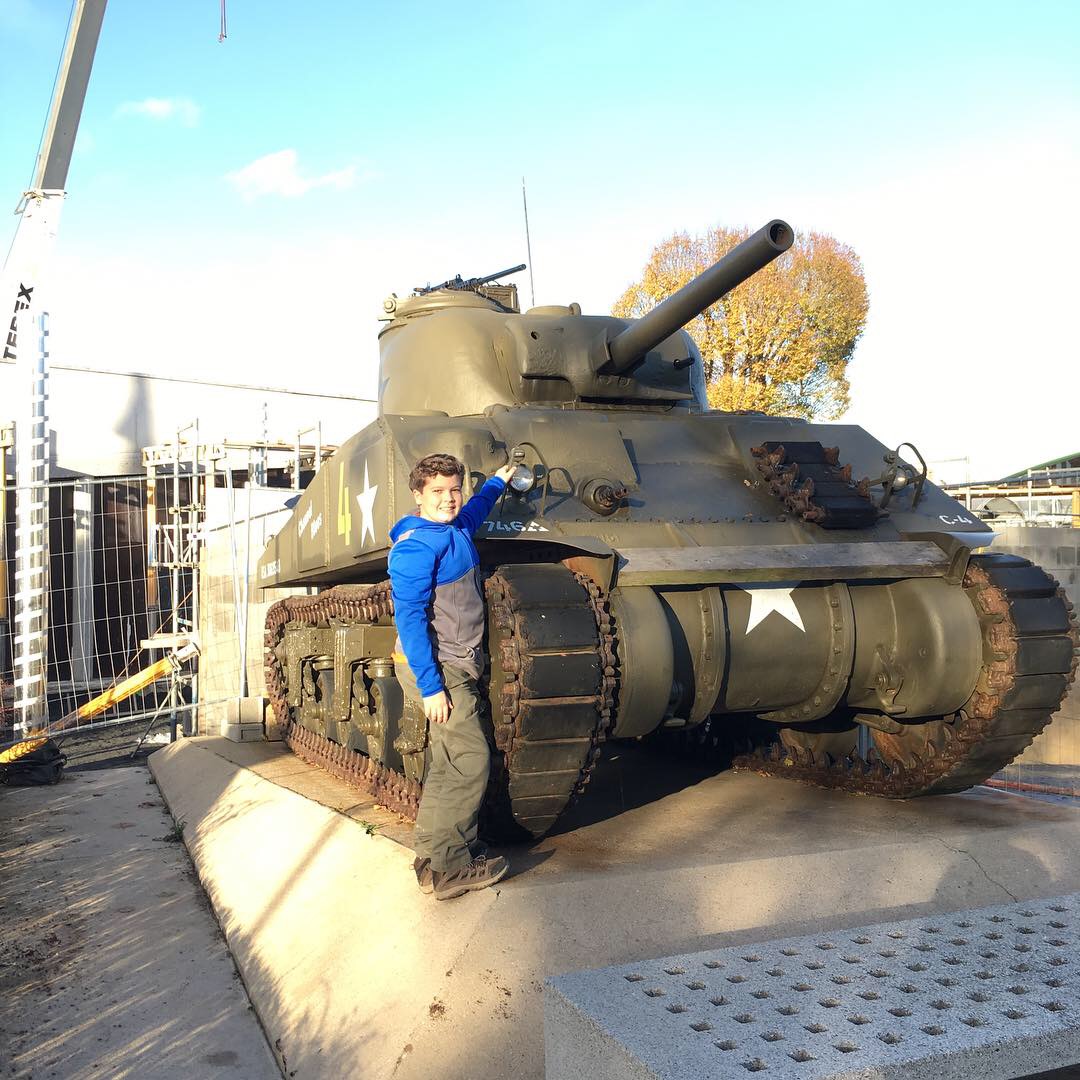 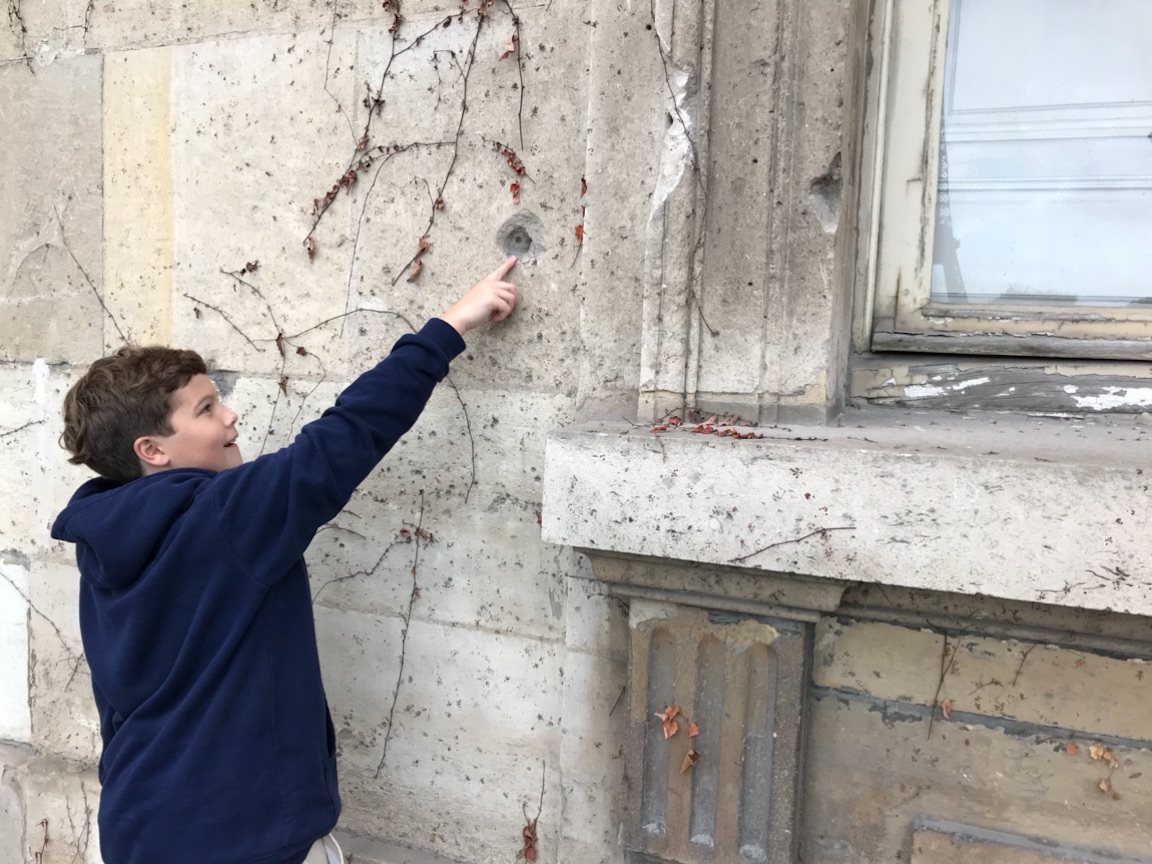 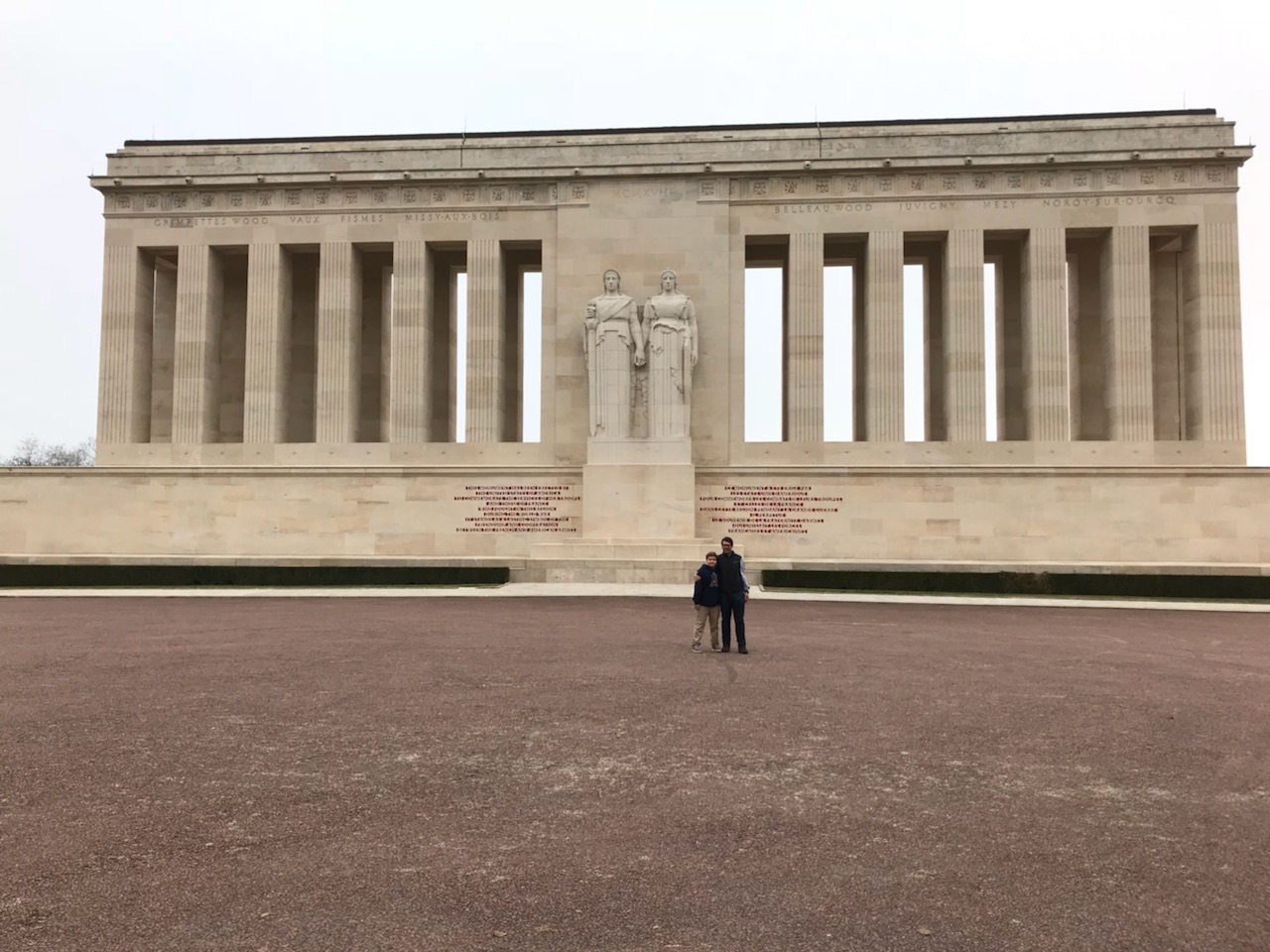 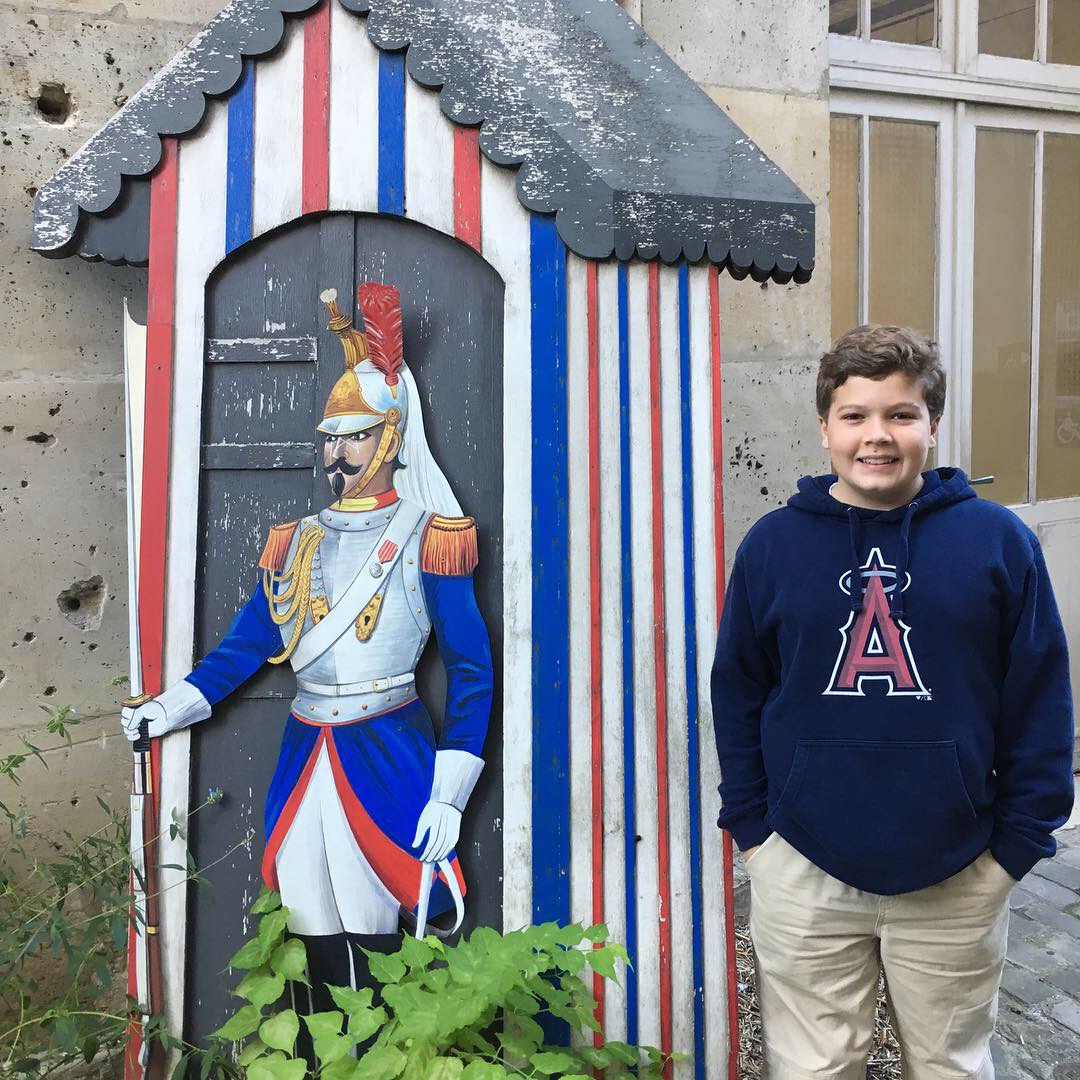