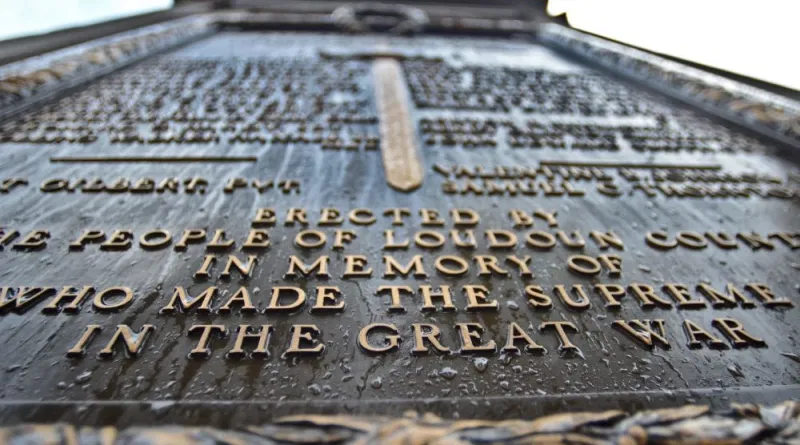 Loudoun County’s World War I monument on the county courthouse grounds in Leesburg.

A memorial in the courthouse square to Loudouners who died serving in World War I will be replaced with one that does not segregate those service members by race.

The plaque, on a stone monument, lists 30 names. Three of those are at the bottom of the plaque, separated by a line—the three Black people on the list, Pvts. Ernest Gilbert, Valentine B. Johnson and Samuel C. Thornton. The memorial was erected 1921, three years after the war, donated by the American Legion. It will be replaced with a new one with a similar design, but with all of the names listed together.

The push to replace the plaque is led by Supervisor Michael R. Turner (D-Ashburn). He previously contacted American Legion Post 34 to ask about replacing the plaque, receiving its support as well as a letter from the War Memorial Trust Committee that includes local veterans, members of American Legion Post 34, and Veterans of Foreign Wars Post 1177, which also endorsed the idea of simply listing all names on the plaque alphabetically.

They also suggested rededicating the memorial on its 100th anniversary next year.

“Thank you, Supervisor Turner, for putting this up so that we can make the changes that are needed in our county, that we see that soldiers fought side by side for our country, and that we should not delineate the person because of their color or their race,” said Supervisor Sylvia R. Glass (D-Broad Run).

“These people made the supreme sacrifice in the Great War, so how are we going to separate them not just in life, but separate them in death?” Randall said.