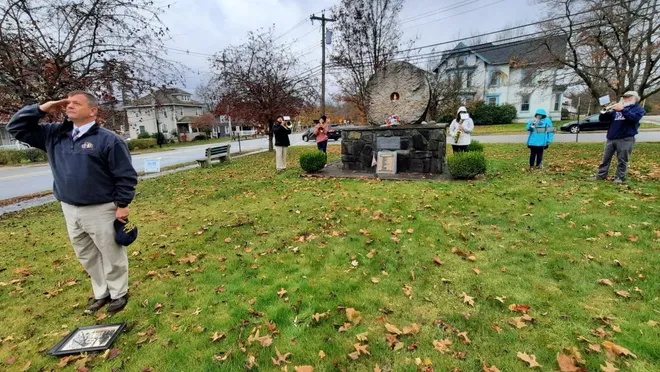 PORT JERVIS – As many people celebrated Veterans Day in quiet ways on their own due to pandemic restrictions, Port Jervis Mayor Kelly Decker and a small number of local musicians carried out a brief, socially distanced rededication at a local park.

With both of the city’s veteran posts closed due to a recent spike in coronavirus cases in the city, and with Port Jervis under a limited state of emergency, the traditional Veterans Day parade, ceremonies and veteran dinners were canceled.

At the original dedication at Skinners Park in 1940, Ora Wheat, commander of Roosa-Fleming VFW Post 161, declared the 20-ton granite disc monument “dedicated to the memory of the living and dead.” Post 161 planned to add later an eternal flame and a marker intended by General Chairman Harold E. Scales during planning stages in 1938.

As the Nov. 11, 2020 Skinners Park event was broadcast live via social media, several members of the Broome Street Band provided music for the brief ceremony marking the completion of the monument as it was originally intended.

“On Monday, Nov. 11, 1940, Armistice Day 80 years ago, this plot of land known as Skinners Park was dedicated with the Eternal Light Monument in honor of the living and memory of the dead World War I veterans,” said Decker, himself a veteran and grandson of a WWI Doughboy.

Read the entire article on the Times Herald-Record web site.