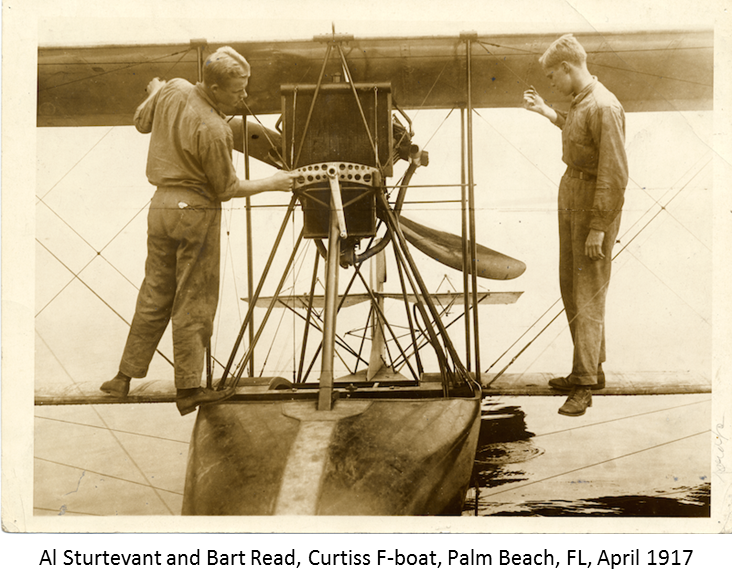 Several questions raised themselves immediately: how important were these young men to the war effort and to naval aviation in particular? What part did naval aviation play in the War? What can we claim as the Unit's legitimate accomplishments, and how can those accomplishments be communicated in a dramatic and accurate way? Is there enough footage and photos to cover the story? And, how can we pay for what looks to be an ambitious film? 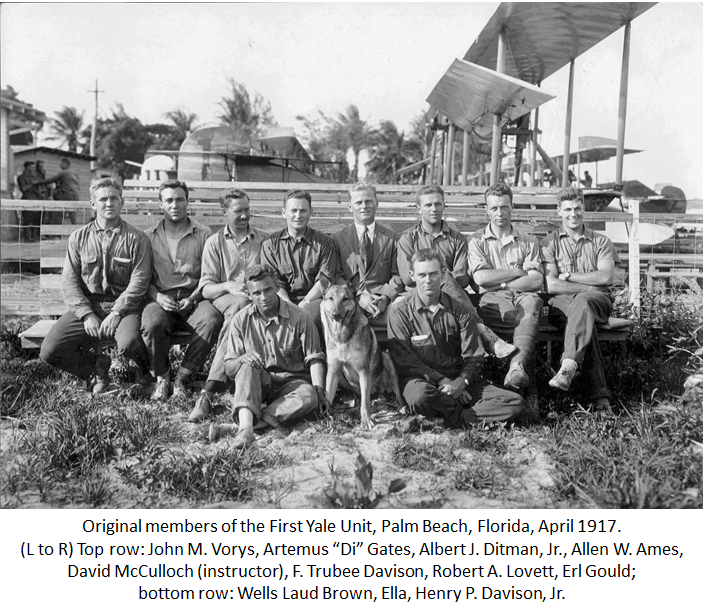 We started a non-profit and put together a small fundraising team comprised of relatives of the Unit members. I started reading: The Millionaires' Unit, a two-volume history of the Yale Unit from 1925, John Keegan, Martin Gilbert, Barbara Tuchman, Paul Fussell, naval aviation histories, biographies of early aviators and naval officers, studies of the War's causes, histories of the ground war, technical books on aeroplanes and aerodromes, battlefield guides — context, context, context.

I soon came to believe that World War One was the most seminal event in American history next to the Civil War. And it is the most overlooked. What was then called the European War was the crucible in which we reshaped our nation — from agrarian to industrial, from rural to urban, from rule by one class to a more diverse culture. Our insulated borders were pierced, we directed our manpower and resources overseas, and we became citizens of the world. When Europe collapsed on itself after four years of cataclysmic fighting, the United States stepped into the void and to the fore. We were now a world power. (Though World War II was some five-times larger in scale and casualties, it did not cause the collapse of three empires, redraw the maps of Europe and the Middle East significantly, nor redefine our modern lives as disruptively as did the First World War.) It was World War One that forced America into the leadership position it maintained as the dominant power on the world stage in the 20th century. 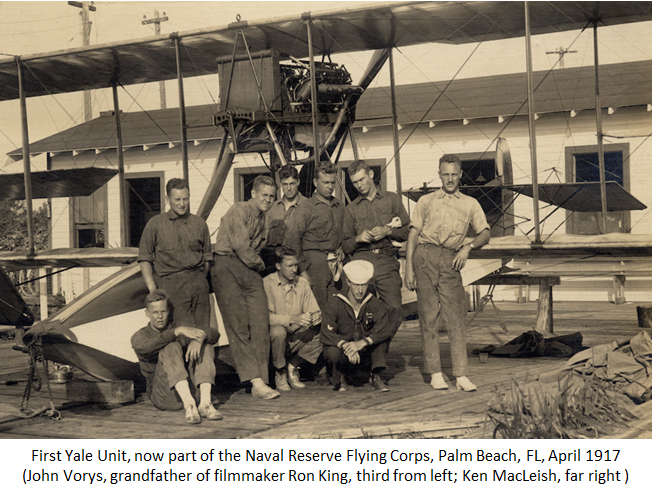 How did the First Yale Unit fit into this vast history? Could we make them seem essential without demeaning the efforts of others? I was confident we would find our story through investigation and research. We started collecting interviews, specific archival photographs, and generic WW1 naval and aviation footage. With our first grant of $25,000 we went to the Hudson River Valley and filmed the planes at the Old Rhinebeck Aerodrome. We now had some footage of WW1 era aircraft we could cut together. We attended events in commemoration of the centennial of U.S. Naval Aviation in 2011, showing brief edited segments at Yale, to friends in Manhattan and at the National Naval Aviation Museum. In looking at the history of early naval aviation, we gained an appreciation for the struggles between new technology, bureaucracy, and individual tenacity as the United States girded itself for war. We then enlarged our scope by traveling to Europe and filming in England, on the North Sea, and in France and Belgium.

After observing the European War across the ocean for two and a half years, the United States Navy realized that the biggest threat to the Allies was the German U-boat, and the most critical and crucial action the Navy could take was to stop the catastrophic loss of men and materiel. Indeed, in February 1917, when Germany declared unrestricted warfare on all ships going to and from Great Britain, the British Admiralty predicted the country could be starved out in six months. 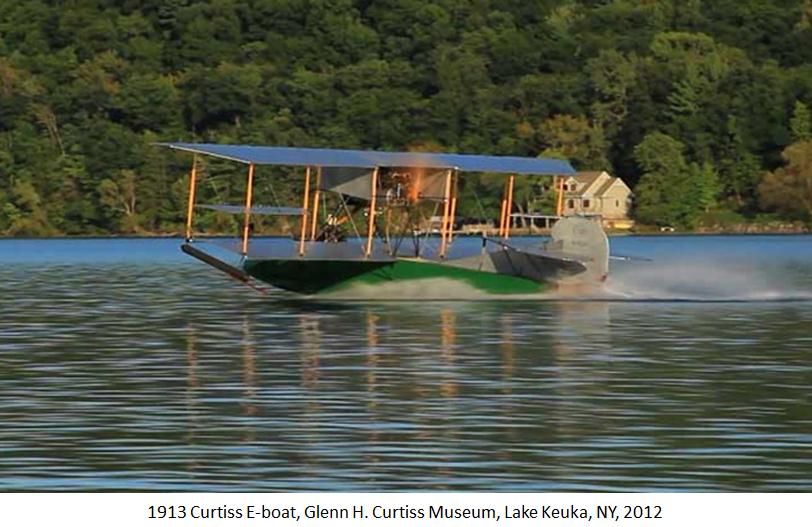 The Yale students had been training for some nine months in expectation of the U.S. Navy embracing their initiative and enthusiasm, but the navy had no provision with which to recognize the Unit. Aviation was such a fledgling industry in America that the Secretary of the Navy and most battleship commanders saw little use for it. Aeroplanes were flimsy and dangerous, and they couldn't carry much. They could only fly in calm weather, and their presence on deck would hamper shipboard operations.

Aircraft pioneer Glenn Curtiss had been experimenting for a half-dozen years to make flying-boats effective components to battleships, and by August 1916 the government and navy were convinced enough to send an appropriations bill to President Wilson, which he signed, providing funds for aviation as well as for a Naval Reserve Flying Corps. Two weeks before the United States declared war on Germany, the First Yale Unit was inducted into the navy as reservists — virtually the only new young men in the service with flying experience.

The First Yale Unit thought they would go to the front together as a unit flying single-seater fighter aircraft. But being the few pilots the navy had with experience, they were divided stateside and overseas as they were put in charge of pilot training, overseeing the construction of naval air stations, flying experimental aircraft, commanding naval air stations, and holding down desk jobs in Washington, London and Paris. All but four of the original 29 eventually made it overseas, and all of them needed further training on more up-to-date aircraft. Of the 25 in Europe, six Unit members transported planes, at least seven flew anti-submarine patrols and convoy escorts, at least six flew bombing missions, and three of them had advanced training with the RAF in British single-seater fighters — mainly the Sopwith Camel. Of the original 29, three made the ultimate sacrifice. Their story is very much worth telling. 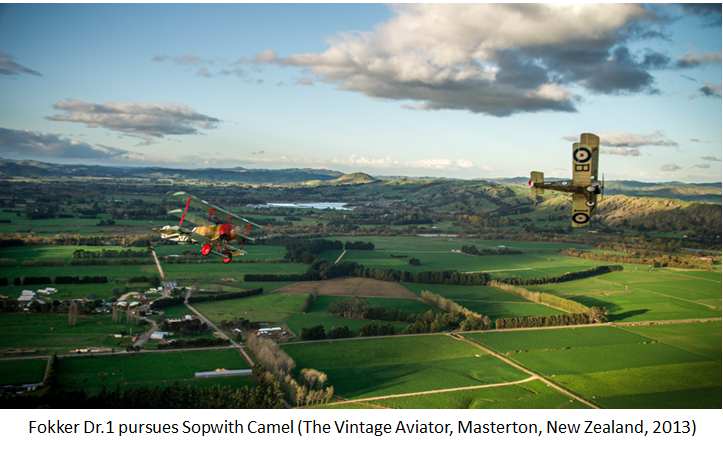 Perhaps the most surprising thing I learned about WW1 was how little the First Yale Unit, as well as the U.S. Navy and the Allies in general, knew about or were ready for what they were getting into. In 1918, after three years of brutal slaughter, Generals Haig and Pershing, commanders of the British Expeditionary Force and American Expeditionary Force respectively, still thought the cavalry and bayonet charge was going to win the day against well-placed German machine guns and artillery. As mentioned, the navy took a long time to realize both how planes could benefit their warships — spotting fall of shot — and how they would coordinate with ships of the line. (It was American Admiral William Sims who persuaded the British naval command to alter their shipping practices and begin sailing in convoy.)

The members of the First Yale Unit had a rude awakening from the dream of going to the front together and winning honor and glory in the air. Not only were they split up, they had been woefully under-trained on obsolescent aircraft when they arrived in Europe. It would be six months to a year before any of them saw any action. And yet, they all played major roles in getting U.S. Naval Aviation on its feet. One of them became the U.S. Navy's first and only air ace of WW1. Another was the architect of strategic bombing, developing techniques he would bring to the fore in World War Two. One was the youngest commander of a naval air station at the age of twenty-two. One was Chief Pilot at Dunkerque, and was subsequently shot down, made prisoner of war, and escaped. Two of them received the Distinguished Flying Cross, three the Distinguished Service Medal, and eleven of them the Navy Cross. The U.S. Navy and the leadership skills of the First Yale Unit aviators curtailed German U-boat activity dramatically. 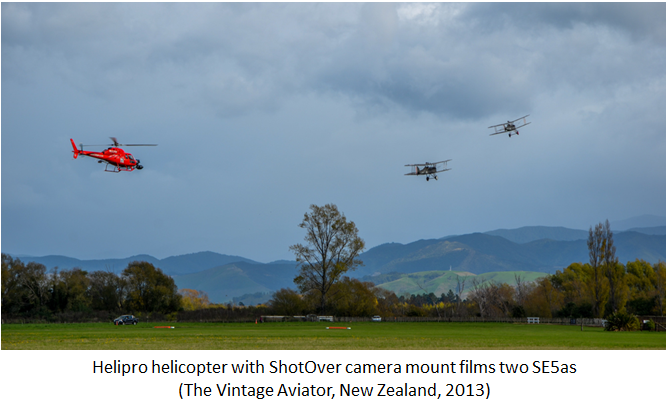 As the writer and co-director of The Millionaires' Unit documentary, I wanted history to tell the story as much as possible. I generally don't like to see re-enactors in a historical documentary; it kills the imagination. I like to see the tangible materials of history — photography, film, letters, maps, ephemera — on screen. The letters, diaries, telegrams, photos and memorabilia of the Unit aviators and their families were so plentiful and rich that the stories could be illustrated with a very tactile feel of the time. The interplay of these real objects with film of the real places — both archival and new — evokes the past better than people running around in costumes.

Happily, we filmmakers fell in with aviation historians and early aviation practitioners. We got to know two of the world's most experienced pilots in flying exact replica WW1 planes, many of them with original engines. We travelled to New Zealand and were given discounts renting cameras, tripods and stabilizers, camera planes and helicopters, replica planes and pilots — all in the service of depicting what it took to fly World War One aircraft in battle and make it as visceral an experience as possible. We hope we've succeeded in bringing this bygone era of a century ago to life, so that audiences can understand what our predecessors did to significantly shape the nation we are today. 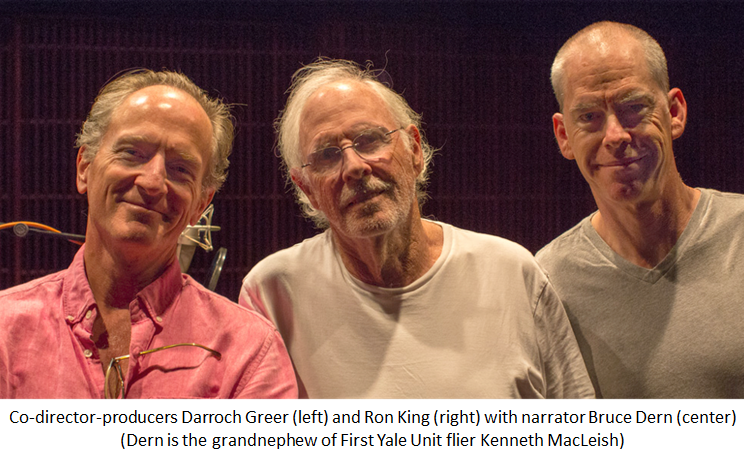 Darroch Greer is a documentary filmmaker and writer living in Los Angeles. With filmmaking partner Ron King, they started the non-profit Humanus Documentary Films Foundation. They spent eight years developing, fundraising and making The Millionaires' Unit — U.S. Naval Aviators in the First World War in time for the commemoration of the World War I Centennial. www.millionairesunit.org