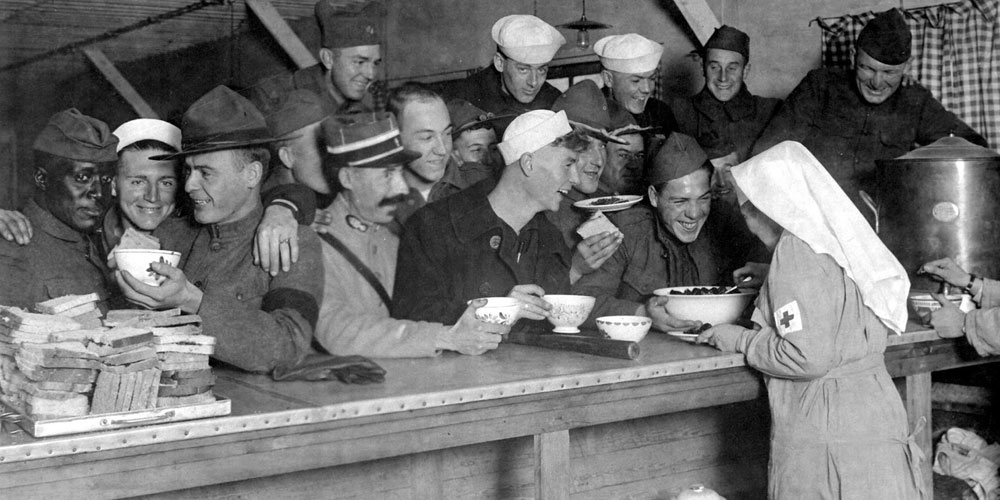 AMERICAN TROOPS in the field were supported by a wide range of services. Hospitals cared for the wounded and sick. Relief organizations such as the YMCA, Red Cross and Salvation Army provided comfort and morale services. Military bands performed concerts of marching music and the latest popular tunes. Most important of all, there was mail from home -- sometimes containing a sweet treat to be eaten or shared with their comrades.

Many of these services were provided by volunteers, including thousands of women. Some worked just a couple of miles from the front lines, and experienced artillery or gas attacks. The doughboys would never forget those who joined them in Europe and shared some of the hardship and risk.

American volunteers had staffed and managed hospitals in France, Belgium, and England since the beginning of the war. The first U.S. military hospital arrived in Europe in May 1917. Initially, most U.S. hospitals treated Allied troops, until American forces entered heavy combat in early 1918.

Many medical innovations were introduced in World War I. X-ray equipment, blood transfusions, and better anti-infection practices all helped reduce fatalities. In addition to battlefield wounds, doctors and nurses faced another deadly opponent - the influeza pandemic of 1918-19. Many medical personnel died, heroically staying by their patients despite the risk.

Many military units had marching bands, for entertainment and morale. In World War I, the most famous was attached to the 369th Infantry Regiment, a segregated African-American unit.

Led by composer James Reese Europe, and drum major Noble Sissle, the band was made up of world class musicians from New York City and Latin America. It not only performed for U.S. troops, but introduced French audiences to jazz.