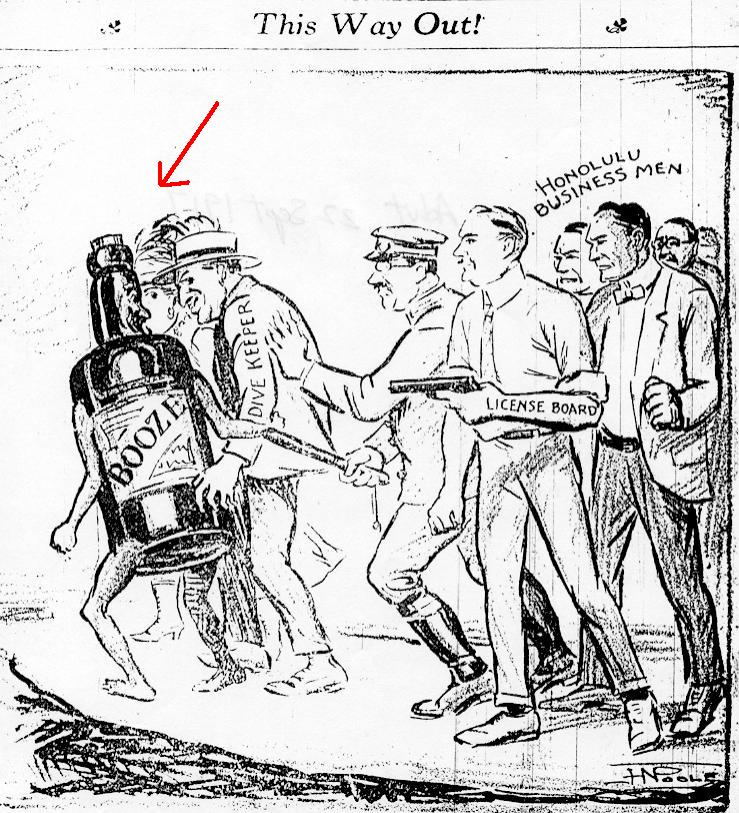 After decades of advocacy, prohibitionists found in World War I food conservation programs an unstoppable vehicle to make prohibition of alcohol patriotic. Even before America declared war, programs saving food aimed to feed starving European refugees. Making alcohol used starch (potatoes, grain, corn) that could feed troops or hungry allies. Drinking alcohol was transformed into an unpatriotic act. Elks Lodge 616 would be square in the debate, and eventually labeled unpatriotic.

Both Hawaii’s branch of the national Anti-Saloon League and Elks Lodge 616 were founded in 1901. By World War I, the Anti-Saloon League was well organized and part of the ‘establishment.’  The press supported prohibition, even if their readers didn’t. Nippu Jiji editor Yatsutaro Soga supported prohibition and nearly lost his job. Advertiser headlines (“Grain much too precious to waste in intoxicants”) reminded readers liquor was now unpatriotic. “Sake not distilled wants exemption” was neutral, but “Liquor Men squealing” showed Advertiser leanings.

The Selective Service Act, May 1917, included controls on the use of liquor by men in uniform. The Advertiser bragged “Booze Taboo to Soldiers Now.”  When vice did not decline, the Advertiser and the Anti-Saloon League called for stronger enforcement. 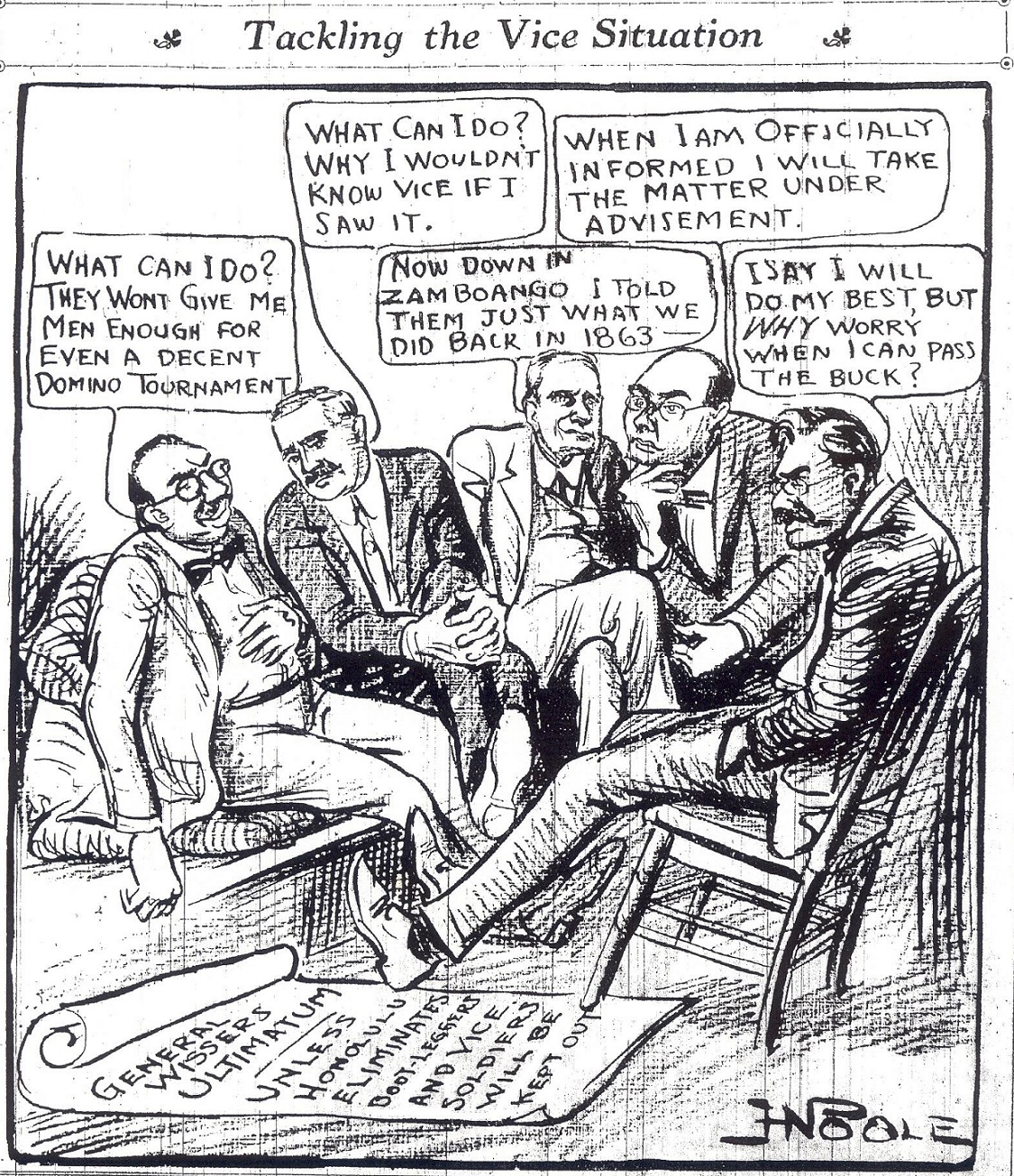 This Way Out” Honolulu business, fearing loss of military customers, drives the bad guys out of town. A ‘floozy’ (arrow) hides behind Booze and the Dive Keeper. Advertiser Sept 22, 1917The League found a strong partner in Army Commander Brig. Gen. J. P. Wisser. Jan 1918, he wrote Mayor Fern warning that if ‘blind pigger’ booze and bawdy houses continued, he would post Honolulu off-limits. The Advertiser predicted economic ruin if vice continued and ran cartoons showing city and state officials as hand-wringing do-nothings.  Loss of business was more persuasive than moral arguments had been and a crack down followed. As restrictions tightened, those who enjoyed drinking and those who profited from it looked for loopholes.

As the war continued, prohibitionists increased the pressure. Many patriots, who were not prohibitionists, felt that sacrifice was necessary both to conserve food and to show support for those making greater sacrifices on the field of battle. The debate over what “I support our troops” means is not a new one.

While prohibitionists were waging war on alcohol, what were 616 Elks doing? Like many Americans who wanted to be patriotic, yet liked a drink of something stronger than tea, Elks struggled with their choices.

After Congress declared war April 6, 1917, the city adopted a form of curfew. One restriction called for closing liquor establishments at 7pm ‘for the duration.’ Elks 616 members unanimously adopted a resolution to follow that standard.The next step was harder to take. In January 1918, a proposal on the floor of the Lodge set up a fire storm of debate: “Resolved that the sale of spirituous liquors be suspended in our Club Rooms for the period of the war.” This definition would allow for wine and beer, but outlaw gin, vodka, whiskey, etc. After vigorous debate that showed no opportunity for compromise, the topic was tabled for one week. The next week’s debate brought no consensus and the topic was postponed 30 days.

January and February 1918 Lodge meetings saw attempts to create an acceptable compromise resolution. One to exclude all alcohol failed to obtain even a second. A resolution to prohibit “all intoxicating liquors except beer” seemed to be the desired compromise. It ended in a tie vote, broken by the Exalted Ruler’s negative vote. Just as the Territorial Legislature would struggle and fail to reach agreement, so did Lodge 616 members. Just as the community saw a connection between patriotism and alcohol, so did some Lodge members. Emotions ran high with one member complaining that during the debate on this contentious issue, “the flag had been sullied.” 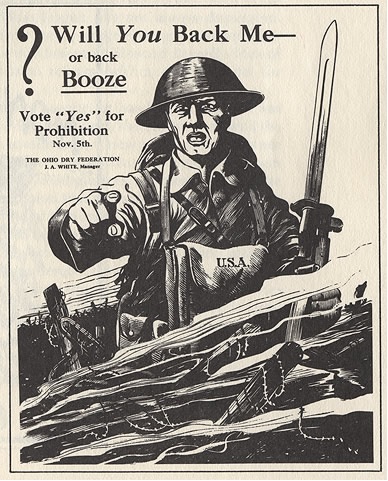 Posters like this made prohibition the only patriotic choice. Hawaii would not get to vote, however.Despite members of the Ad Club in 616 ranks, Elks did NOT run a matching publicity campaign. During the public debate on drink, Elks 616 quietly carried on charitable acts and patriotically bought bonds. Not having ‘advertised’ their patriotic efforts, Elks were an easy target. When they opened their Advertiser January 24, 1918, they found themselves the most recent victim of an anonymous, self-appointed judge of patriotism. Their unpatriotic act? Resistance to universal prohibition of alcoholic beverages.

Despite members of the Ad Club in 616 ranks, Elks did NOT run a matching publicity campaign. During the public debate on drink, Elks 616 quietly carried on charitable acts and patriotically bought bonds. Not having ‘advertised’ their patriotic efforts, Elks were an easy target. When they opened their Advertiser January 24, 1918, they found themselves the most recent victim of an anonymous, self-appointed judge of patriotism. Their unpatriotic act? Resistance to universal prohibition of alcoholic beverages.