The ground breaks. As the new WWI Memorial materializes in D.C., it's fascinating to take a look at other war memorials and the narrative of their construction. Reading the "story" of the ways memorials are conceived plays an important role in the understanding of public, cultural memory. Delve into the subject this week with WWrite's blog post,"Forgetting to Remember: Making America's Great War Monumental Again," by WW1CC intern, Sarah Biegelsen. 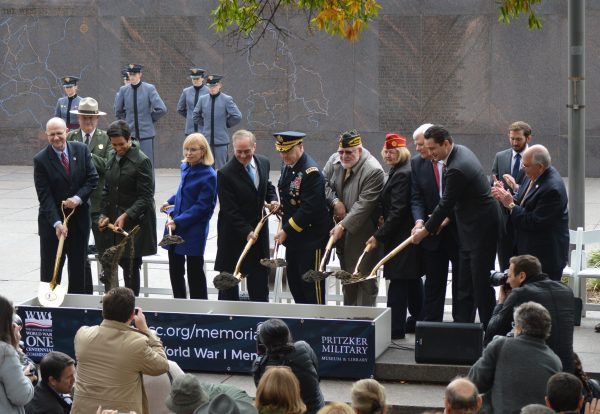 Ignoring the First World War in the United States has been a century-long tradition that will either be rectified with the 100th anniversary of the U.S. entry into WWI or will endure through the collective amnesia of American society.For a paper I wrote my senior year of undergraduate college, I examined the memory of World War I in the United States through memorials and museums. I also compared and contrasted formal commemorative events of 1918-1939 with the ways they are commemorated in the twenty-first century. I was motivated to write this paper since I had taken a class my freshman year about British memorialization of the two world wars, a memory that has been flourishing in the past years, unlike in America. As I was curious to find out why Americans today have failed to give World War I its due attention, I decided to explore the emerging and declining American WWI memorialization over the past 100 years. Here in this post, I am going to briefly discuss some findings about the following memorials:

I wanted to study further why the Liberty Memorial in Kansas City was designated as the National World War I Memorial in the United States. I grew up in Kansas City and the Liberty Memorial has loomed over downtown all my life. When the museum opened in 2006, I began visiting it on a regular basis. Ultimately, these frequent visits influenced my academic and career pursuits. I interned for the museum in 2014 in the Kansas City collections department, which helped me develop more of a personal ambition to preserve the War’s legacy.

I learned that, before the Armistice was even declared on November 11, 1918, Kansas Citians were eager to build a memorial for those who had perished during the War. Kansas City had established a nationwide design competition, choosing an Egyptian Revival concept that still stands at the edge of downtown Kansas City today. Kansas City implemented a huge memorial that most other American cities did not replicate during this period for a few reasons: 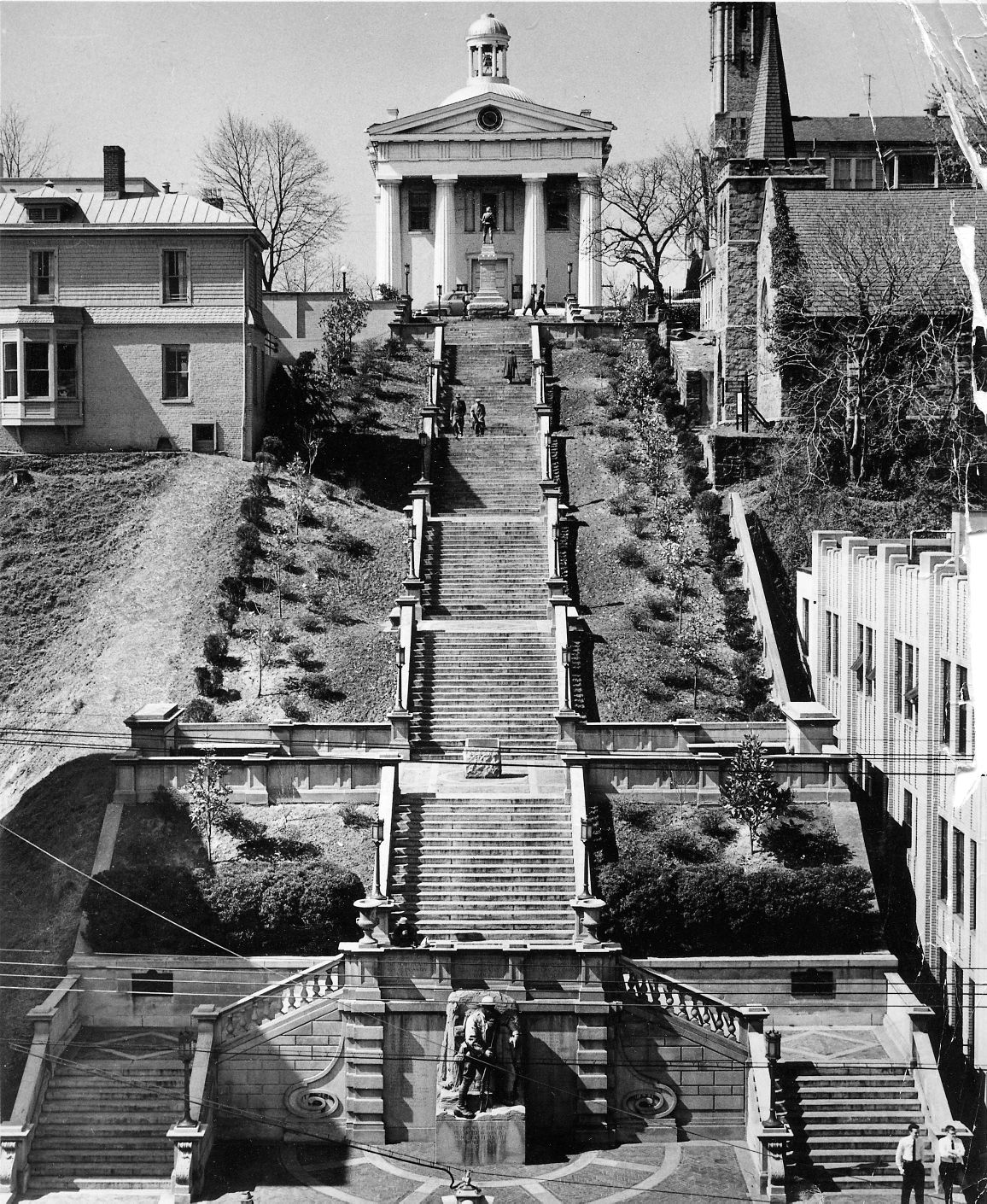 I chose the relatively obscure Listening Post WWI statue in Lynchburg, VA as a local example because my college was a ten-minute drive from it. The Listening Post is at the base of Monument Terrace in downtown Lynchburg, which is arguably one of the most identifiable architectural structures in the entire city. Every Friday, locals can see veterans in uniform stand in front of the statue and rally with signs and flags to encourage people for donations or cars passing by to honk to support American troops. While choosing the Listening Post was a no-brainer in regards to the convenience of my school’s town, it also showed me that the memorial's purpose initial purpose–to be a place of active remembrance–continues today.4

The other war memorials at the Lynchburg Monument Terrace have taken the form of plaques instead and, while they are at the center of the memorial, they are only discernable up close. Additionally, this Great War memorial is unique to the others since the names listed are segregated by race, bearing witness to the Jim Crow era South. As far as I am aware and can assume, there have been no efforts to change this. Would desegregating the memorial erase the original intent and history of the memorial’s founding? It's an important question to be answered.

In the Listening Post’s recent history, the bayonet of the doughboy statue was removed twice; the latest occurrence was in 2013. After a plea to track down the suspect with a sizeable reward, the vandal/thief was identified as a 21-year-old local college student (not my school thankfully) who had been climbing on the statue when the bayonet accidentally broke off as she was losing her balance. She threw the bayonet in the nearby James River and was miraculously able to point it out to authorities a year later where they fished it out and made a mold to ensure the bayonet would be attached in the case of future damage. She was ordered to pay a fine, write down the names of everyone listed on Monument Terrace, and spend time with local veterans.5 I remember when this event occurred as I was just starting my freshman year; when my father visited me at school, I showed him the statue and told him the story. As I was writing this paper years after the fact, he reminded me of this incident and I immediately included it in my paper. 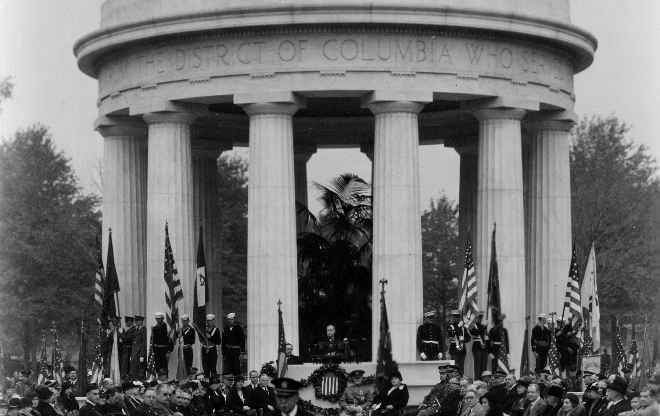 I decided to write about both WWI memorials in Washington, D.C. as they reflect varying times of monument development in the nation’s capitol. The first one, The District of Columbia War Memorial, was built in the interwar period because of financial and government obstacles delaying it from earlier constructionr.6 Despite the fact that the D.C. local WWI memorial sits on the National Mall, it is almost  invisible to unaware tourists going to see the capitol’s more recognizable monuments. If you look closely from the National WWII Memorial, which is much more prominent, you can peek at the local WWI memorial from the grove of trees – otherwise it is unassuming to passersby.

While it is not completed, I want to say a brief word about the new national WWI memorial that has just broken ground in Pershing Park since I was an intern for the World War One Centennial Commission in 2016. I primarily did historic research of divisions in the American Expeditionary Force but also conducted genealogical research of prominent CEOS, healthcare professionals, and members of Congress. I wrote an in-depth list of instructions for how to do genealogical research in the most effective way possible with results that were interesting, worthwhile, and necessary because in the end, the Commission would present Congressional members their family history in hopes of getting fundraising support for the new memorial. I still have mixed feelings about the new memorial considered the ‘national’ WWI memorial in the U.S. because the Liberty Memorial in Kansas City was the first to claim the spot. I understand that having a presence in the nation’s capitol is significant to tourists and international visitors but, in the argument of my paper, that may erase the purpose of Liberty Memorial and, furthermore, the Great War itself as a unique moment in our nation's history. 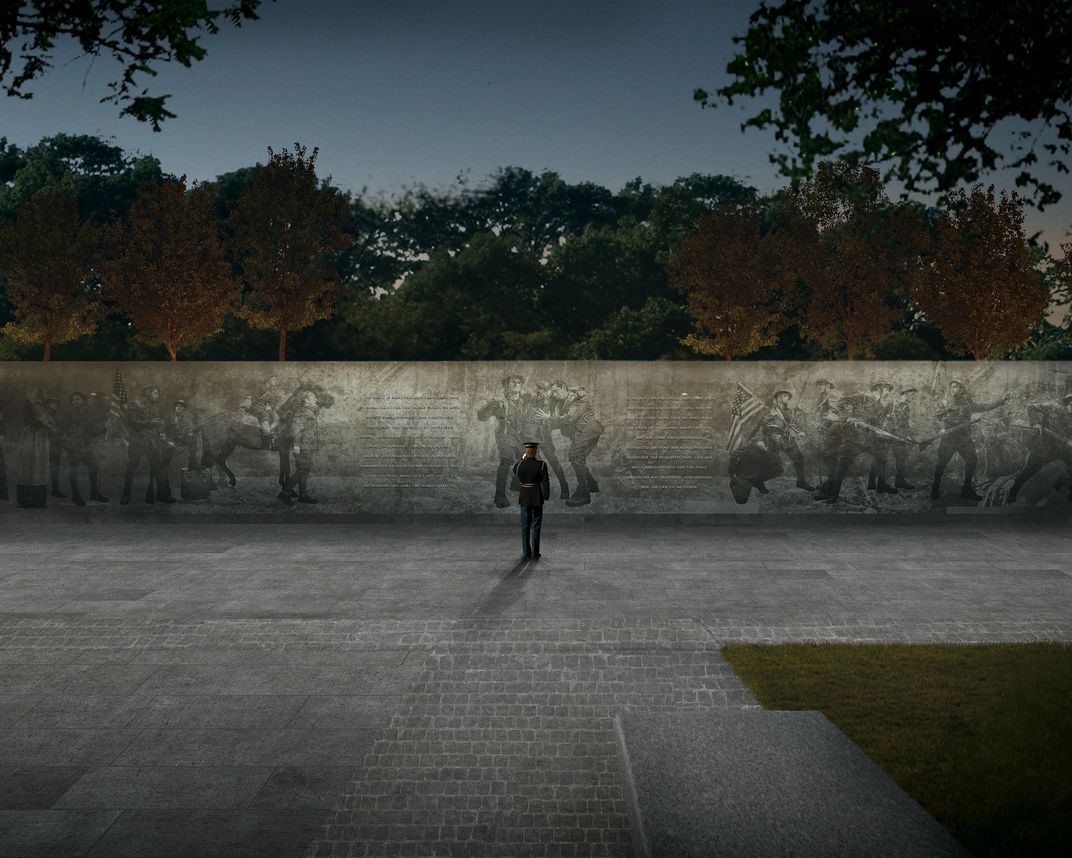 The winning design for the D.C. new WWI memorial, entitled "The Weight of Sacrifice"

April 6, 2017 was the 100th anniversary of America’s entry into World War I. A commemoration at the National WWI Memorial in Kansas City was observed to mark the occasion with both patriotic excitement and moving reflection.7 Since I was still at school, I could not attend the ceremony but included the historic event in my paper as a contrast with commemoration nearly a century ago. It was a joy to write this paper, as I would attempt to delve into the mindset by listening to “My Dream of the Big Parade” by The Peerless Quartet and other 1910s songs on WWI music playlists I have. America’s centennial events of the War are only beginning and it is crucial to try to reconcile its historical relevance to today. In order for memory of the War to persist, it has to exist in the hearts and minds of people that monuments and memorials may not be able to solely fulfill. Although interwar period Americans tried their best to honor the War’s dead for future Americans to remember, their legacy has been unappreciated and forgotten due to other consequences. For myself, memory of the First World War has been my focus for nearly half my life. I hope events, education, and conversation during America’s centennial in the next few years will remedy that with people like myself willing to carry it out. 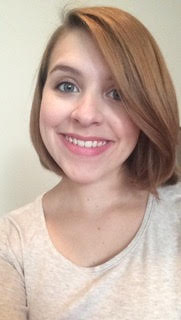 Sarah Biegelsen recently graduated with a Bachelor of Arts in History and a minor in American Culture from Randolph College. She has been an avid student of the First World War having grown up in Kansas City where the National World War I Museum is located. She interned in the Collections Department at the museum in 2014 where she was responsible for photographing hundreds of pieces of trench art. Two years later, she interned for the Centennial Commission as a Management/Education Intern by researching American divisional history and genealogy. She had the honor of introducing two scholars of World War I at her school for major historical lectures. Since the summer of 2017, she has been a member of the Mod Council - a committee of the Modernists which supports the National WWI Museum. She is inspired to pursue her education in Public History and further her knowledge of World War I.