As soon as the armistice was signed, the situation with animals began to reverse.  They were no longer being overworked, but neither were they any longer the most valuable item of supply in the entire army. After a few more hard weeks, their conditions began to improve rapidly.

Still, animals were a commodity, they were no longer needed, and worse still, they ate and required daily care. Thus, the quicker they could be transferred out of the U.S. inventory, the more money could be saved.

Invaluable on Monday, Surplus On Tuesday 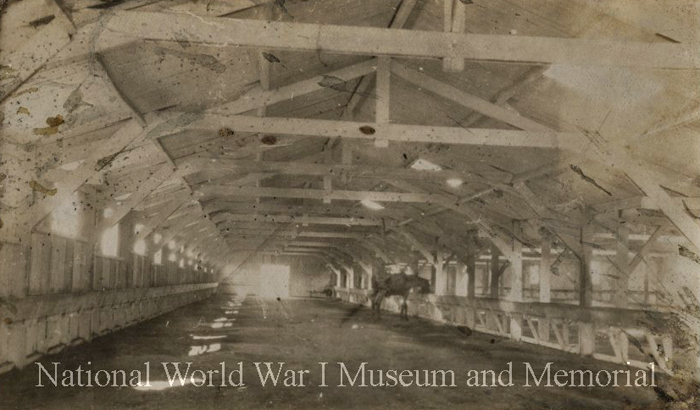 Interior of the U.S. veterinary hospital at St. Nazaire, France. This photo is good for showing the hospital's design and construction, but empty hospitals were not found in France until well after November 1918. Personnel and supplies for ten more field hospitals and one more base hospital were either in shipping or being organized in France when the armistice was signed.1

But even these facilities would be overwhelmed for several months as troops demobilized and turned their animals in by the thousands. Healthy animals were supposed to be turned in to remount depots, but many were not actually healthy enough for this route.

Over the next several months, a determined effort was made to locate new hospital sites and have more labor troops assigned to Veterinary Corps to aid in evacuation and care of sick animals until the veterinary hospital personnel which were on the water would arrive. 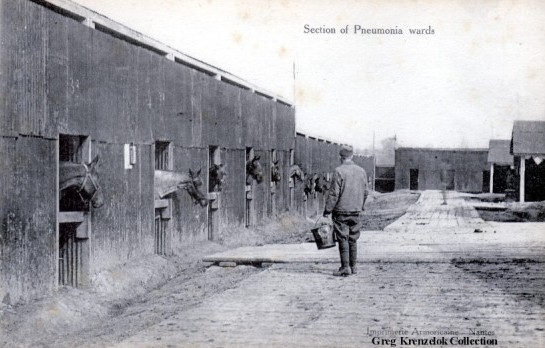 After April 1, 1919, the capacity of veterinary hospitals was gradually reduced, and by May 1, twelve veterinary units had been placed on the priority list for return to the United States, and all labor troops had been relieved from duty with the veterinary service. Only 8 hospitals were then in operation, containing about 4,000 animals.4

The hospitals could have been evacuated more rapidly but for the fact that the remount depots were receiving animals from troops that were returning home and were crowded to capacity. Therefore animals were held at hospitals until they were in a salable condition.5

Ironically, as weary animals were being turned in as excess, shipments of new animals from the U.S. were still arriving. The animals on the ships were uniformly more healthy and of course were not as exhausted as the animals in France, and the army began to issue them to the Third Army, which was the units that were moving into Germany to occupy that country. For more on what happened to those animals, scroll down to The Lighter Side, below. 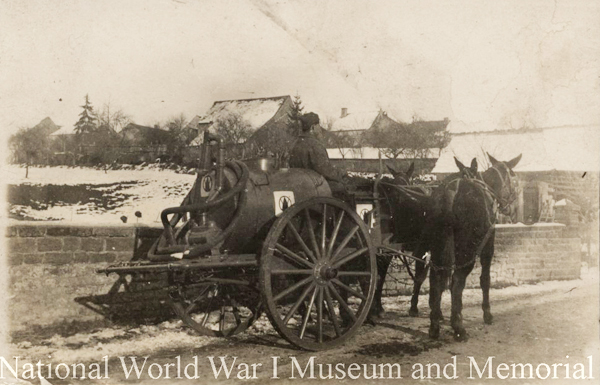 Hauling a drinking water supply tank in Germany. 1919.From mid-November to mid-December, the A.E.F. was still forming the Third Army. It needed to be far more mobile than the First or Second armies had been in France, where the battlefront never moved from month to month.

As the Remount Service reported later, “the task of securing enough animals to make that Army mobile necessitated the stripping of the First and Second Armies. As all animals in both the First and Second had been through a long, hard siege, it was an impossibility to turn over enough good animal to enable the new Army to make the long march to the Rhine without many evacuations.”6

The 200-mile march from France to the Rhine started November 17 and ended on December 14, 1918 – less than four weeks. During that time the Third Army evacuated 1700 animals. One division alone, the 32nd, lost 515 animals, 343 being evacuated and 172 having died or been destroyed.7 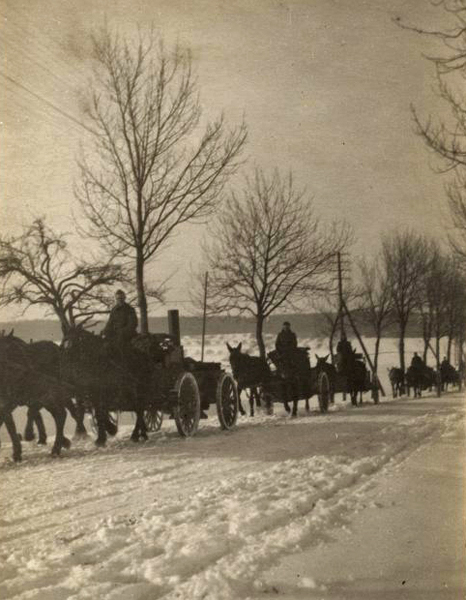 Pulling an army kitchen on an icy road in Germany, winter 1919.During that month of marching, the two biggest problems were evacuations (because there were no veterinary hospitals near the rapidly-advancing troops) and forage, because the army was outmarching its supply chain. “A large part of the time there was hardly more than half enough forage.”8

The march took them through a large part of Germany where the local populace had not had enough food for themselves or their own animals for months or years, so local purchase was not much of an option. And, of course, it was winter.

The supplying of animals to the Third Army was completed by mid-December 1918, only a month after the armistice. All the other animal needs of the occupying forces were met by January 1919.

The number of animals in Germany did not change appreciably by May of the following year, but the condition of the U.S. animals with the army in Germany improved vastly.9

After January 1919, horses and mules that were “accumulating in Remount Depots and Veterinary Hospitals, … due to the nature of the wound or disease, would not become serviceable for a period of many months. Authority from G.H.Q. was finally secured to have such animals submitted to an inspector for condemnation and sale to the French Government as a result of a special contract with them at a price of 450 francs per head.”10

From that time onward, disposal of American animals proceeded via various arrangements, in France and eventually in Germany and Luxembourg. The Polish government sent a delegation to Germany to buy 5000 of the U.S. animals being excessed there. The Remount service after-action report is filled with notes about the dissatisfying prices received, which is not surprising since not only were the Americans disposing of their animals, the British were doing the same thing, though they did send some of their best and healthiest animals back across the English Channel, a short journey of a day.

Clearly, the horse and mule market in France was flooded.

Both auctions and private sales were attempted, but the sheer numbers were what drove the sales prices. And, French buyers were particular. They wanted horses or mules that they knew could be driven or ridden, and so sales where they could watch the animals being worked were more popular. Finally, they showed a preference for long manes and tails, and shaggy fetlocks – exactly the hair that the army routinely clipped off. So, hair was allowed to grow to entice buyers.11

The U.S. was not really considering bringing horses home. For one thing, there was no shortage of animals in the U.S. – there were, in fact, many horses and mules standing in remount depots stateside, already owned by the army, and most of them were also being auctioned off. The A.E.F.’s own chief veterinarian had actually advised against shipping any animals back due to the fear of contagious diseases being brought back with them.

However, a few animals did come home. A provision was made for up to 200 officer’s mounts to be returned after lengthy quarantines in both France and then again in the U.S. These were horses that had been brought into the army by their officer owners, and now were returning to civilian life.12 Another 100 publicly owned horses were also to be sent home, the thought being to return the very best of the animals then in Europe so that they could be used in Army schools in the U.S. It is unclear if any of these public animals actually made the trip back.