For details and more information click full article below:

For details and more information click full article below: 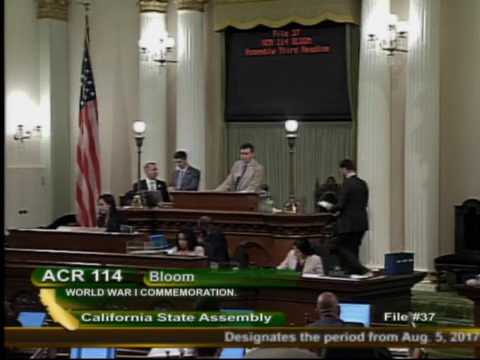 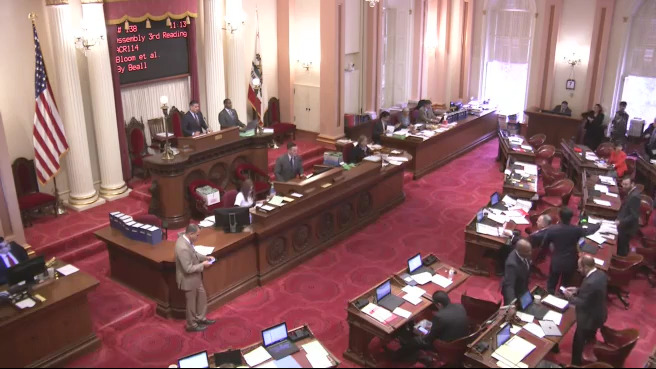 To commemorate the centennial of World War I, the United States World War One Centennial Commission and the Pritzker Military Museum and Library are teaming up to provide 100 grants of up to $2,000 each for the restoration of 100 World War I Memorials across the United States. On September 27th, the first fifty approved “WWI Centennial Memorials” awardees of the 100 Cites/100 Memorials program were announced.

According to the U.S. WW1 Centennial Commission the 100 Cities / 100 Memorials grants program was designed to “motivate and support the efforts of local organizations across the country to honor the memory of their hometown war heroes, to build awareness of the war’s impact on their local communities, and to restore and provide for the ongoing upkeep of their local World War I memorials”

To support this, the Centennial Commission and the Pritzker Military Museum and Library provided $200,000 in initial matching grant funding.

Local citizens and associations, including civic groups, service organizations, and veteran’s groups were encouraged to find and nominate memorials in need. Restoration and commemoration proposals were to then be submitted for consideration, in hopes of being selected as one of the recipients.

These four California awarded memorials, as with all of the grant winners, now bear the designation of being a “WWI Centennial Memorial” and will each be provided an authorized bronze medallion intended eventually to be mounted to them.

The Centennial Commission and the Pritzker Museum has announced the second fifty will come from the second round of the matching grant challenge now underway. 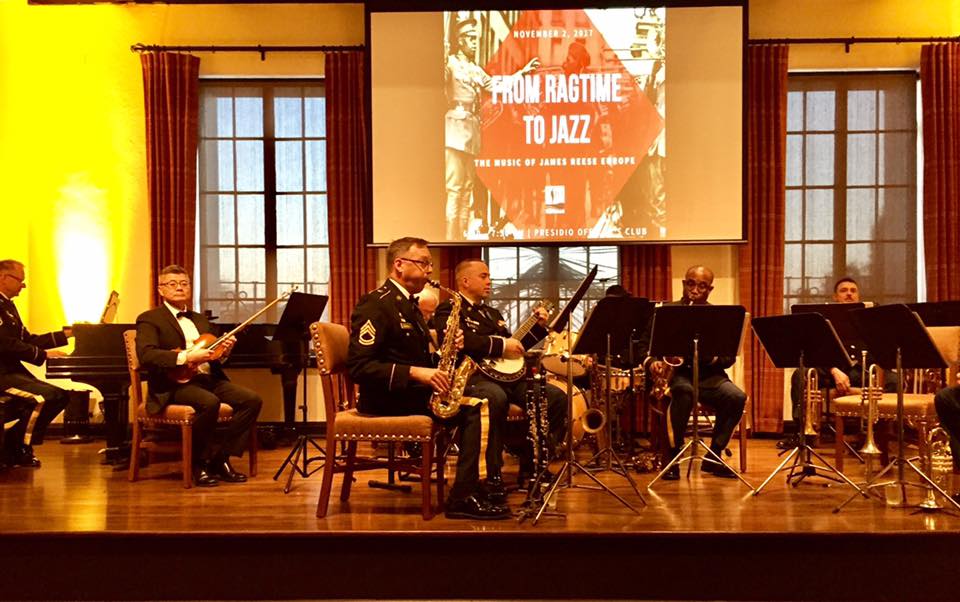 Presidio Dialogues - From Ragtime to Jazz: The Music of James Reese Europe

On November 2, 2017, a National Guard band brought to life the fascinating tale of Jim Europe, a leader not only in the transition from ragtime to jazz, but also in bringing respect to his race. Narrative, video, and live music blended together to tell this amazing story of a black composer and conductor who was the first black American officer to cross No-Man's-Land in World War One.

The Veteran's Day concert with members of the First Detachment of the 40th Infantry Division of the California National Guard Band was performed at the Presidio Officer’s Club at 50 Moraga Ave., in San Fransisco, part of the Presidio Trust’s Dialogues program. This was a concert commemorating the 100th anniversary of Lt. James Reese Europe and his famous 369th Hellfighter Band. Lt. Europe was an important transitional figure in American history and his band helped develop and spread the new idiom of Jazz while they served in Europe as part of the AEF (American Expeditionary Force.)

The 2nd Annual Amber Waves of Grain Festival in Corona 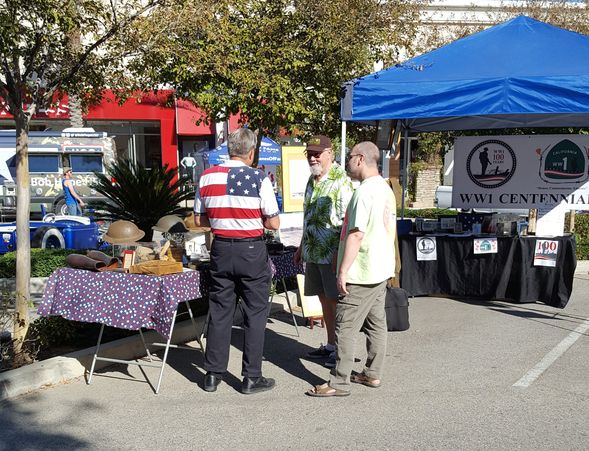 California WW1 Centennial Task Force Co-Director Bill Betten (back to camera) speaks to visitors at the Task Force booth at Amber Waves of Grain Festival in 2017. 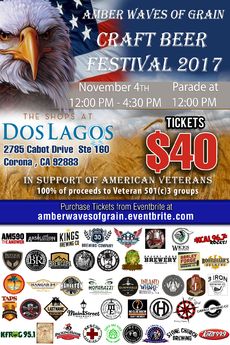 One parade, a military museum, dozens of vintage and modern-day military vehicles, scores of food booths, 40 micro-brewery dispensing booths, hours of live music, and more all added up to a great day of enjoyment. 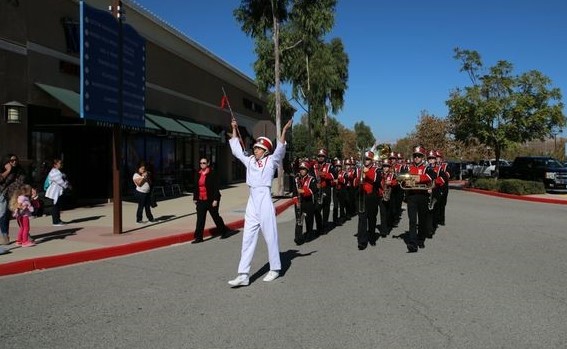 Merchants at The Shops at Dos Lagos in Corona know the Inland Empire has had a long, 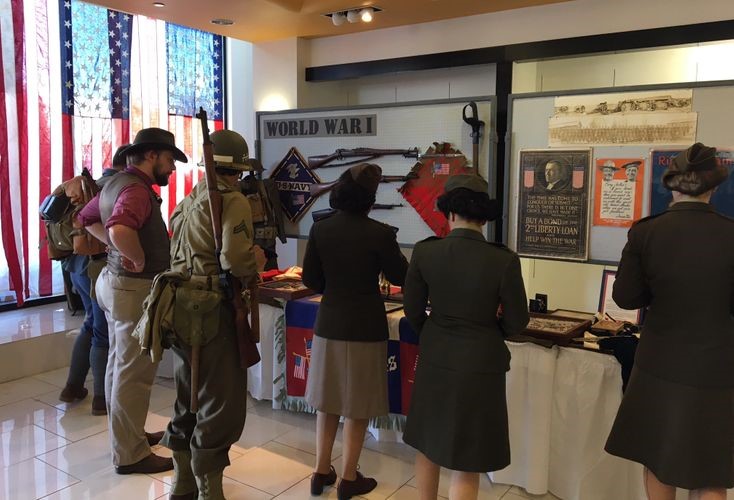 The Amber Waves of Grain Festival military museum. rich history with the veterans of this area, particularly because of a few active members of their community. The organizers of the Amber Waves of Grain Festival, Bill Steinkirchner of Stone Church Brewing and Post 216 American Legionnaire George Brightenburg, value this relationship and consider it an honor to serve the veterans and citizens of the United States. 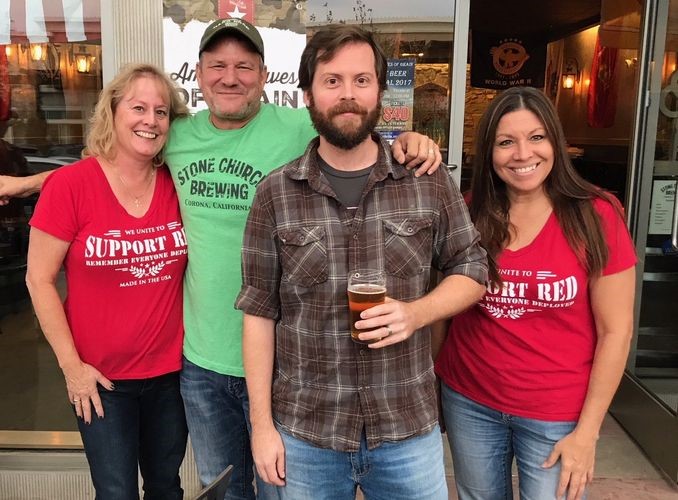 Event organizer Bill Steinkirchner (in green) with friends at the Amber Waves of Grain Festival. 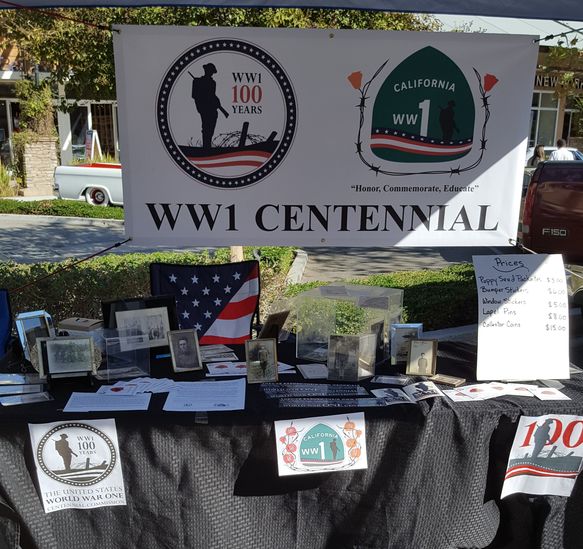 The California WW1 Centennial Task Force had been invited to participate and were encouraged to setup an information booth at the 2nd Annual Amber Waves of Grain Craft Beer Festival, held on November 4, 2017. Dedicated to help support Veteran's Service organizations the festival provides guests the opportunity to enjoy a joint military-civilian parade, visit a World War II museum, while interact with historical reenactment 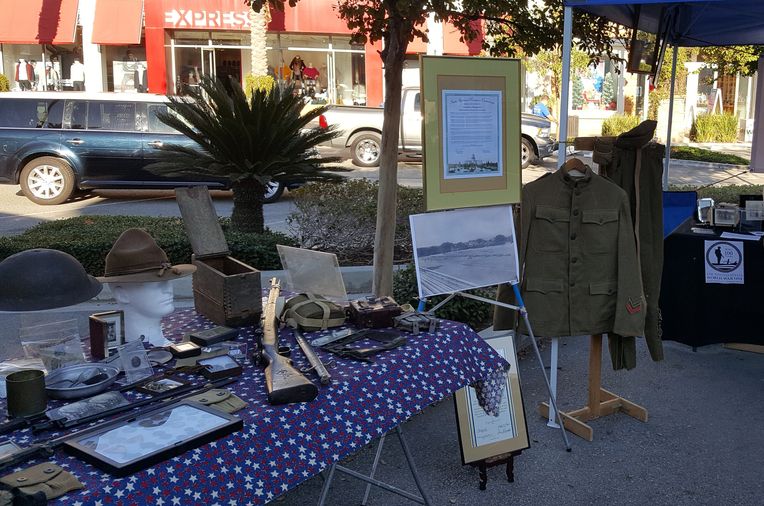 Just a part of Co-Director Bill Betten's display at the California WW1 Centennial Task Force booth at Amber Waves of Grain.groups depicting life from all eras of U.S. history, including World War I. The festival also featured static displays, including past and present military vehicles and plenty of vendors and activities for families to enjoy. Over 30 non-profit organizations which provide services and support to our local veterans were represented, as well as a display of WW1 artifacts at the booth of the California WW1 Centennial Task Force. 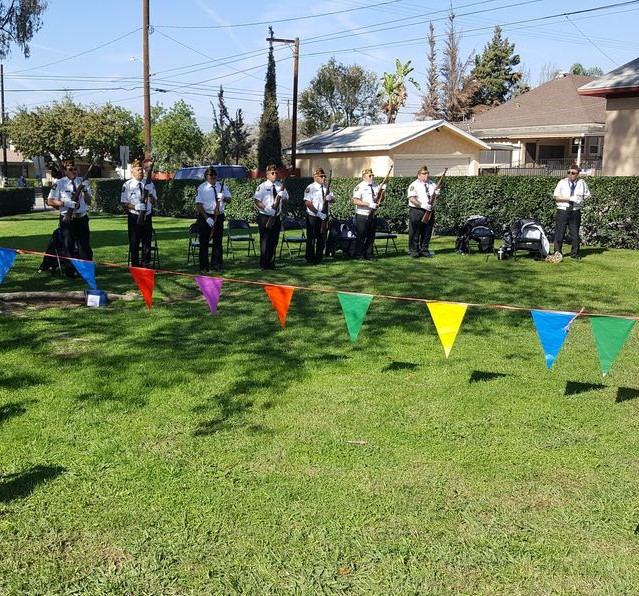 Colton Veterans of Foreign Wars Honor Guard stands ready to fire salute.I had never attended a Colton Veterans Day event before, but I was extremely surprised and pleased upon making my first appearance representing the California World War 1 Centennial Task Force. I had not known of the earlier Prayer Service and Veterans Parade that had taken place in town, but arrived well before the mid-morning's Veterans Honor Ceremony at Fleming Park had begun. 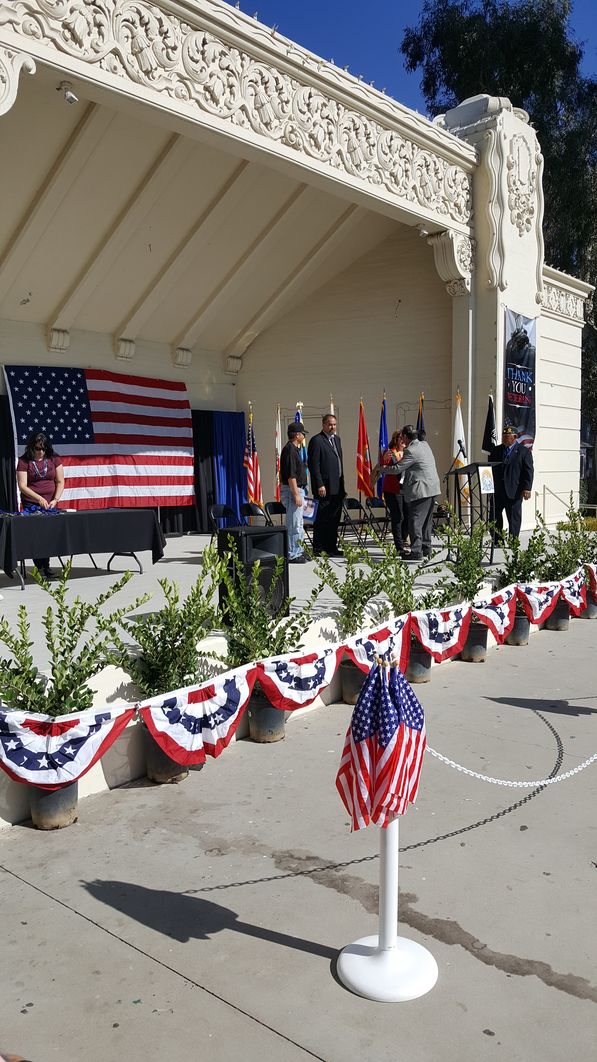 Dr. G had already been busy with the Veterans Parade at 9:30 a.m. with local dignitaries, veterans, the Scouts, the Colton Fire Department, and the Colton High School Marching Band among others.

The park began filling with many veterans, their families, and invited guests. Soon, the officials took their positions on stage. The Master of Ceremonies addressed the 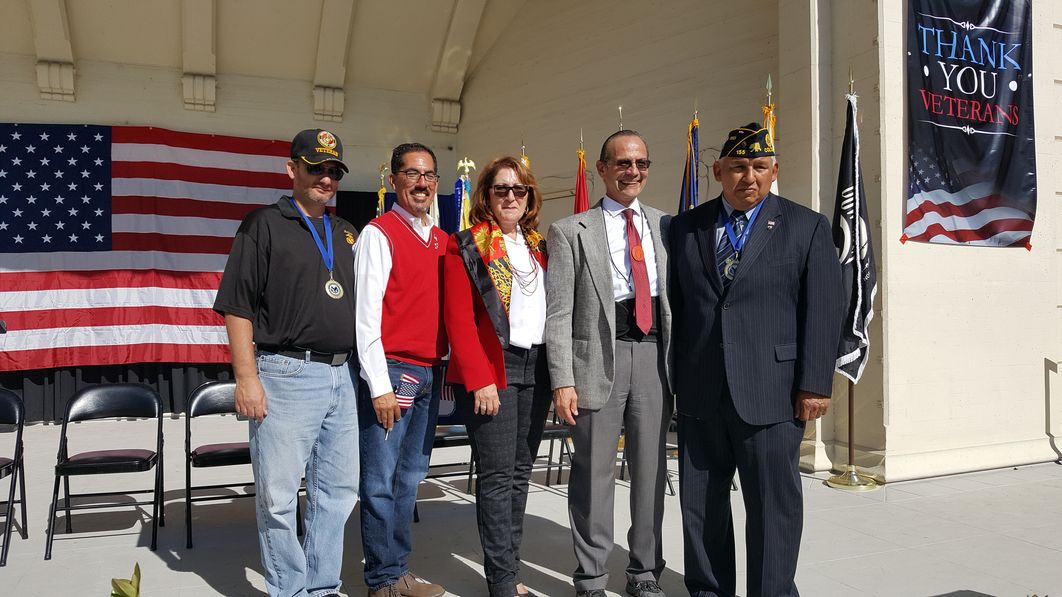 Guest speakers and Colton public officialscrowd that sat on the arena benches or had ventured to claim locations in the shade of the park’s trees. A very fine ceremony followed that began with the usual opening prayer, presentation of the colors, and a singing of the National Anthem.

Speakers approached the podium and shared their thoughts with those attending on the issue of Veteran’s Day, but the most significant was yet to 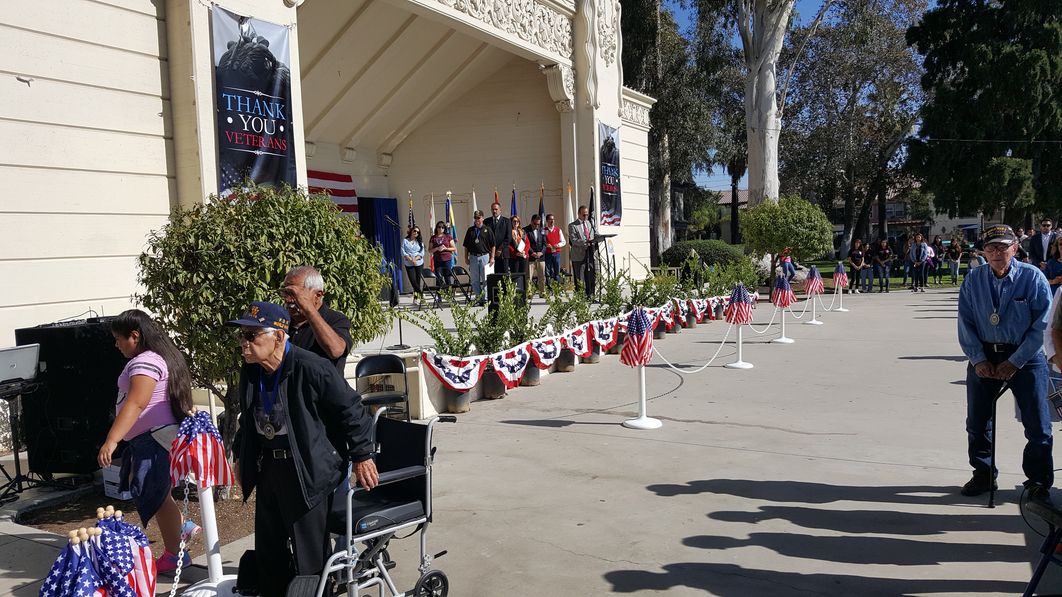 Colton veterans approach the stage for recognition. The WW2 veterans were called first.come. Colton officials then stepped up to make a presentation to any and all Veterans present. Each one was called onto the stage an recognized for their service and to receive a special veterans medal and ribbon. 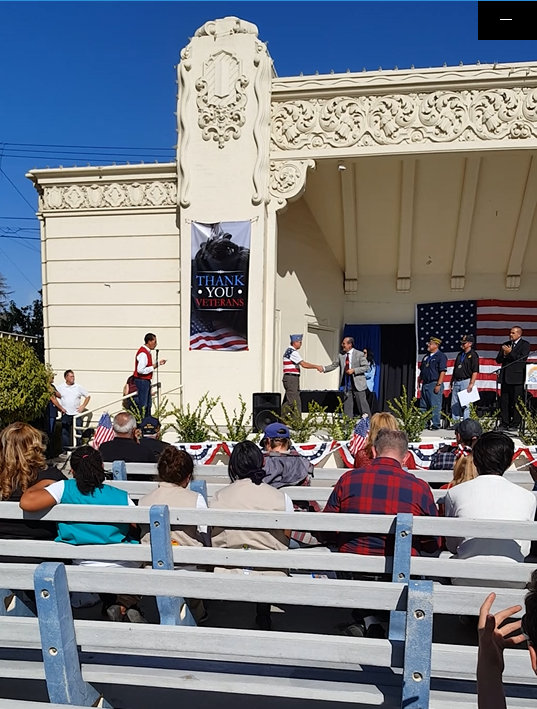 Co-Director Bill Betten receives recognition from the City of Colton.Amidst all the heroes being recognied I was invited on stage as a representative for the California WW1 Centennial Task Force to receive the medal for those who served during WW1. I told Dr. Gonzalez that it was my honor to walk for those who were no longer with us from 100 years ago. 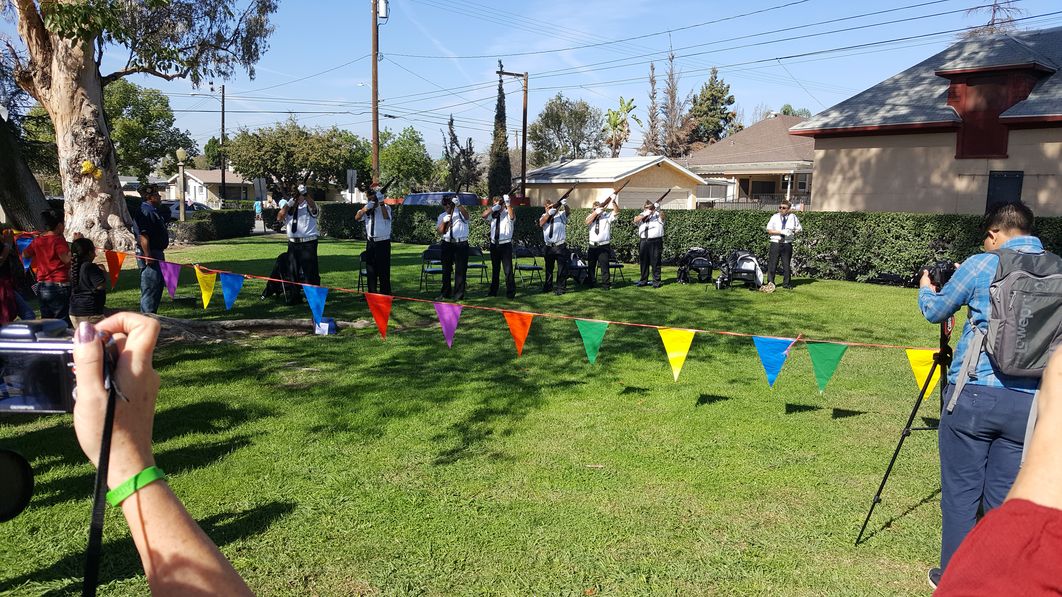 Following the presentations, in honor of those who have given the ultimate sacrifice for their country, the Veterans of Foreign Wars Honor Guard fired an impressive twenty-one-gun salute and presented a playing of Taps.

All were then invited cross the street to attend the Veteran’s Showcase being held at the Colton Women’s Club where local veterans were spotlighted and had on display artifacts of their service. All of these had very interesting stories they eagerly shared. 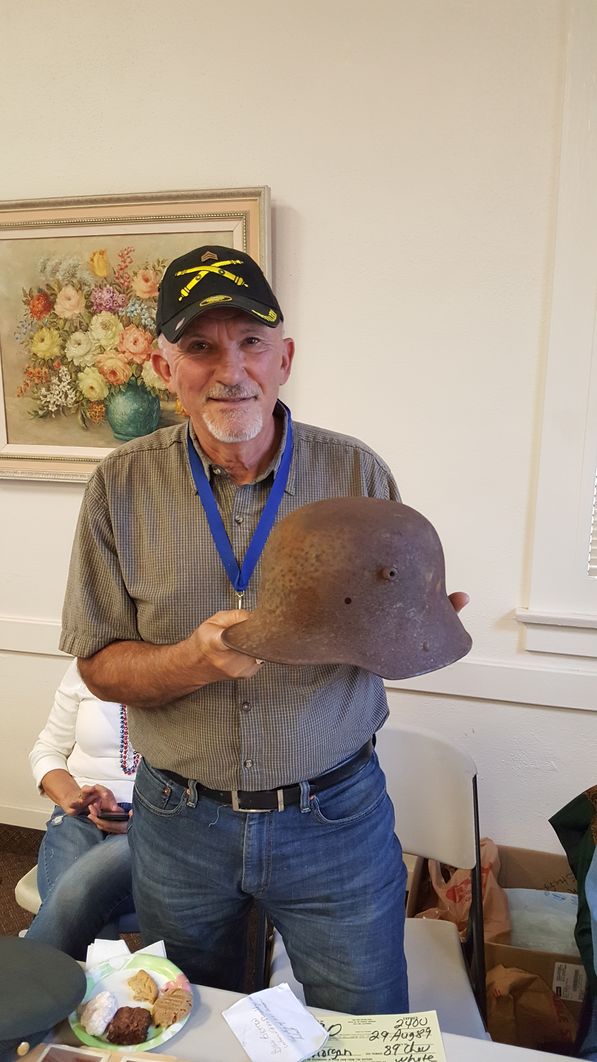 At the "Veteran Showcase" at the Colton Women's Club Veterans Day 2017 a WW2 era vet proudly displays his WW1 German helmet he literally stumbled over while crossing a field just after World War Two. 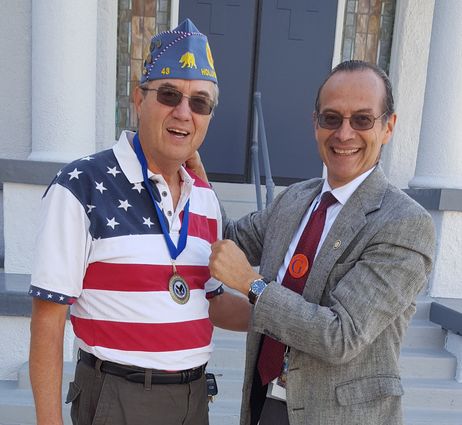