READY TO SERVE - A Story of Nurses in World War One 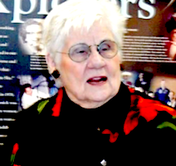 Ready to Serve is created from letters the nurses sent home from France.  They speak of wounded doughboys who needed the skilled care a trained nurse could administer.  One nurse wrote home saying, "I may forget the names, but I will remember the faces of those brave lads forever."

In 1917 Johns Hopkins Base Hospital 18 accompanied the first American Army troops to France. The 64 nurses included in the staff were all graduates of the Johns Hopkins School of Nursing, Baltimore, MD.

In their northern location the Johns Hopkins Base Hospital 18 faced punishing cold weather which froze medicines, and stressed patients and staff. Caring for increasing battle casualties stretched the nurses' endurance but they never stopped. Through their letters we have a close-up of a battlefield hospital.

Maryland spoken word artist Ellouise Schoettler is known for seeking stories of unknown women - then bringing them to life with "heart and humor."

Ready to Serve is her second one-woman show which focuses on women's little known WWI history. "This story will be 100 years old in 2017 so I wanted to give these women a voice during the time of the World War One Centennial."
​
Schoettler performs nationwide for adult and family audiences .